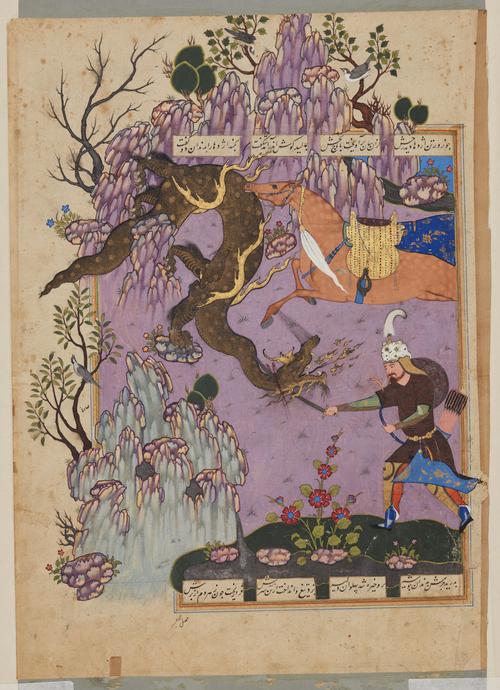 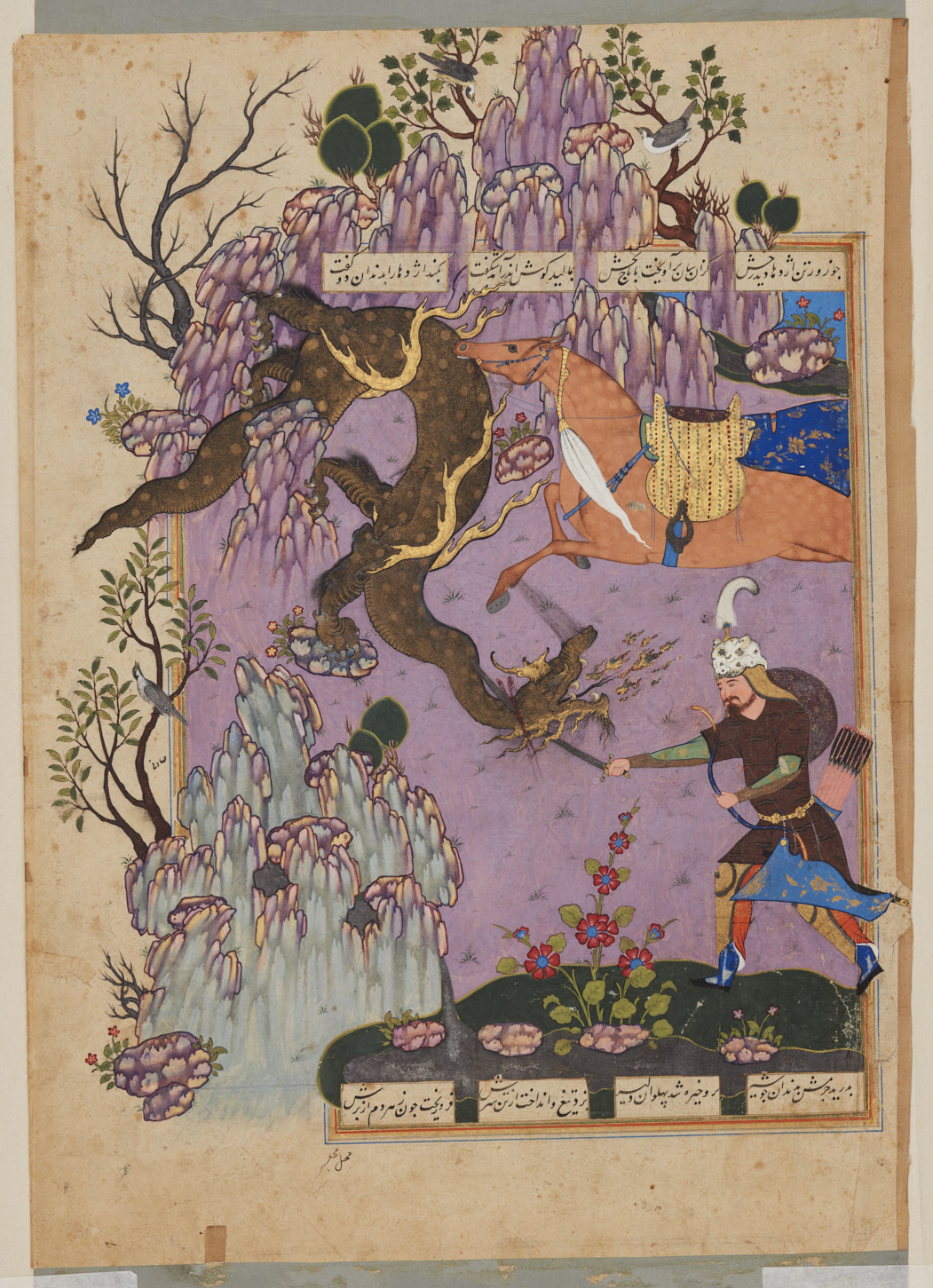 This is the third of three paintings in the Aga Khan Museum Collection attributed to Sadiqi Beg, who contributed a total of seven pictures to Shah Ismail II’s copy of the Shahnameh. Even more than in the other two pictures discussed, the background landscape of swirling rocks, trees, and birds dominates the picture and the page. The presence of the text is reduced to a minimum of two verses at the top and bottom of the picture, giving the only indication of the regular outline of the text block, seemingly superimposed on the scene. The rocks contain several small grotesque faces. Beneath the bottom frame, the words mahall-i majlis (“place for a picture”) may represent the initial instructions by the studio head to the calligrapher to leave room for a picture of this scene. The action is confined to the three figures involved in this dramatic encounter between the hero Rustam, his horse Rakhsh, and the dragon.[2]

The seven trials or “stages” of Rustam, the Haft Khwan, were an extremely popular subject from the earliest examples of illustrated Shahnamehs at the outset of the 14th century. Iran’s foolish Shah, Kay Kavus, unwisely invaded Mazandaran, notorious as the inaccessible homeland of the demons (divs). There, he was captured, blinded, and incarcerated by the White Div. The loyal hero Rustam, son of Zal son of Sam, the foremost champion of the Shahnameh, set off to rescue him by the shortest and most direct route. Along the way, he was required to overcome seven perils, the third of which was his encounter with the dragon. Rustam’s trusted steed Rakhsh alerted him to the danger and attacked the dragon while Rustam prepared to fight. The picture is placed very precisely in the text, at exactly the moment when “[Rakhsh] bit [the dragon] between the shoulder blades, he tore his flesh with his teeth like a lion.” Rustam, in amazement, then drew his sword and cut off the dragon’s head, releasing a stream of poison.[3] Rustam is identified here by his white-leopard fur headdress and his tiger-skin jacket, the babr-i bayan.

Over 120 other illustrations are currently known of the third trial, making it the most frequently illustrated episode after Rustam’s final successful encounter with the White Div, probably due to the participation of Rakhsh and because of the dramatic possibilities in depicting dragons. Rustam’s seven trials were mirrored, later in the Shahnameh, by similar ordeals undergone by Isfandiyar, son of Gushtasp (see AKM102, AKM103).[4]

The folio has obviously been trimmed at the top and glued down on card, evidence of the unscrupulous activities of Belgian art dealer Georges-Joseph Demotte (d. 1923). In the early 20th century, Demotte was quick to dismember Shah Ismail II’s copy of the Shahnameh. He then sold its pages to a number of collectors, including the Baron Edmond de Rothschild.

Notes
[1] Shah Ismail II was the third ruler of the Safavid dynasty (1501–1722). Reuniting the eastern and western provinces of Iran, the Safavids introduced Shiite Islam as the official state religion. Ismail II, son of Tahmasp (r. 1524–76), seems to have been inclined to return to Sunnism, but in this and his artistic patronage he was perhaps simply seeking to distance himself from his father’s regime. He was murdered after ruling for 18 months.
[2] See Robinson, Colnagi, 38-3, fig. 19x; Canby, Princes, Poets and Paladins, 159, fig. 34.
[3]  Shahnameh, ed. Mohl, “Kay Kavus,” verses 404-407; ed. Khaleghi-Motlagh, “Jang-i Mazandaran,” verses 375–78. The text differs in minor variants from the standard editions.
[4] As discussed by Olga M. Davidson in Poet and Hero in the Persian Book of Kings, Ithaca & London: Cornell University Press, 1994, 156–67.