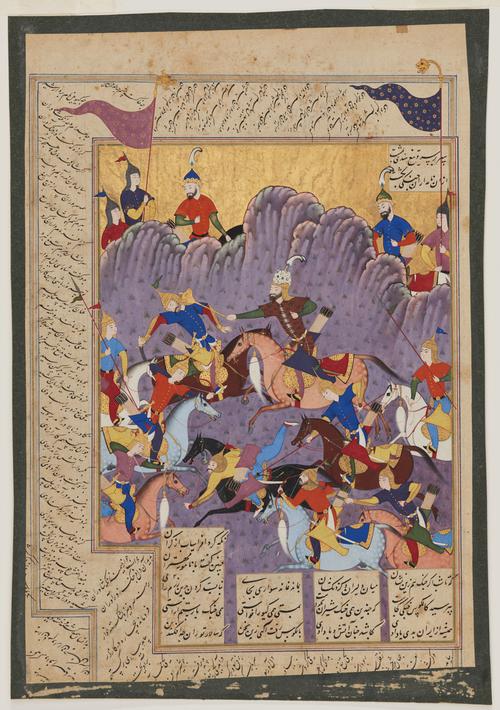 AKM101, Rustam and the seven heroes fight the Turanians 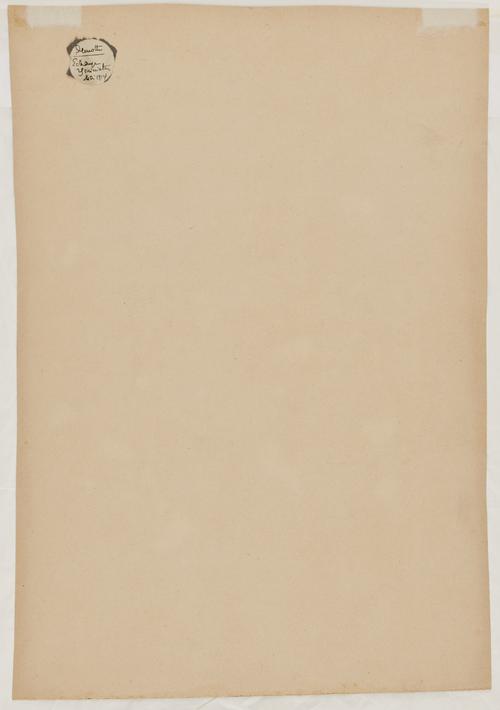 AKM101, Rustam and the seven heroes fight the Turanians, Back 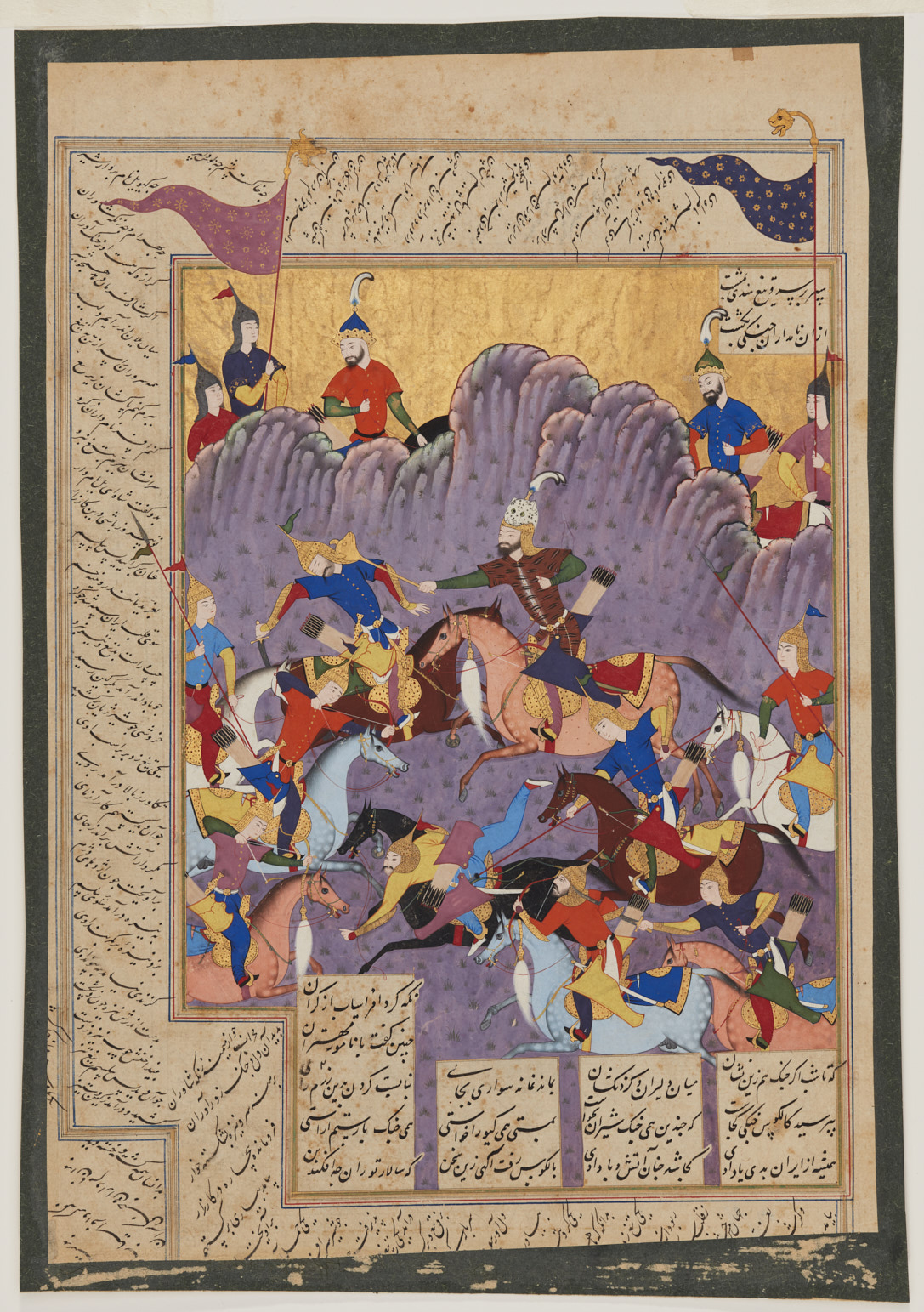 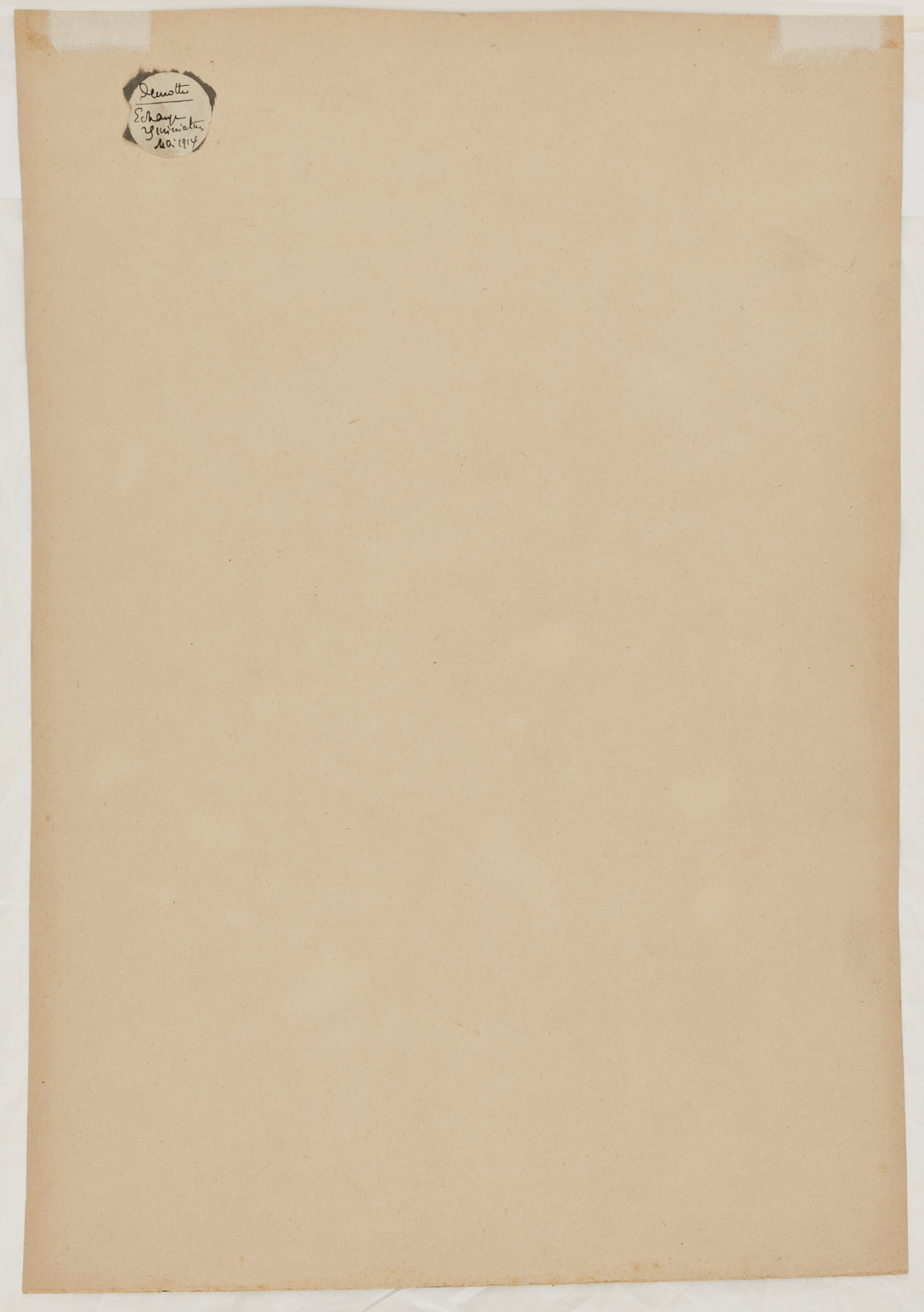 Rustam and the seven heroes fight the Turanians

This scene takes place during the “Battle of the seven heroes,” when a group of Iranian champions decides to go hunting in territory owned by the Turanian king Afrasiyab. Afrasiyab hears of the expedition and sends a force to meet it, instigating a battle in which the Turanians are routed. Firdausi’s verse describes Rustam meeting the attack of Piran, “shield above his head and Indian sword in hand,” and killing half the enemy. There is no sign of his shield and sword in the painting, though he does wear the characteristic white-leopard fur headdress and tiger-skin jacket. Rustam instead carries a heavy mace, as the poet Firdausi describes a few verses earlier.[2]

The painting depicts Afrasiyab above the hillside on the right, next to a banner-wielding attendant; he looks on in consternation and predicts that nothing will be left of his army if the fight continues. From the text in the main frame surrounding the painting,[3] we know that he asks the whereabouts of the champion, Alkus, wishing him to join the fight.

A marker at the end of the second row beneath the picture signals a marginal addition to the text, which carries on within the outer ruled frame; it narrates the entry of the Turanian hero Pilsam into the battle and continues right round to the bottom of the painting. This text is not part of the earliest copies of the Shahnameh and is relegated by the modern editor Khaleghi-Motlagh to his variant footnotes.[4]

The rapid sequence of fights makes it unclear exactly which battle is being depicted. If it is not the first one involving Rustam, it is possibly his fight with Pilsam, which comes at the end of the passage in the margins: Rustam throws himself into combat brandishing sword, battle axe and mace, causing Pilsam to flee. However, the painting does not truly reflect this action. It calls into question the order in which the page was composed, as the outer ruled margin seems to be an afterthought, not joining correctly to the inner margin, and not cutting the banners protruding from the top. It is likely the fight with Pilsam was added afterwards and is not the intended topic of the picture.

There are about 20 paintings of this text, but almost without exception they are located within the story of the fight with Pilsam, notably the painting in the Shah Tahmasp Shahnameh. Only a mid 15th-century manuscript in St. Petersburg follows the original version.[5]

Mihrab is identified in the angle at the bottom left of the first ruled frame, and the style of “Rustam and the seven heroes fight the Turanians” is similar to other paintings attributed to him in the manuscript,[6] particularly the treatment of the towering mountainside behind the action.

The folio has been trimmed with a loss of text at the side and bottom, and it was pasted down on card, evidence of the unscrupulous activities of Belgian art dealer Georges-Joseph Demotte (d. 1923). Shortly after a 1912 exhibition at the Musée des arts décoratifs in Paris, Demotte dismembered Shah Ismail II’s copy of the Shahnameh. He then sold its pages to a number of collectors, including the Baron Edmond de Rothschild. The original mount obscured most of the marginal text.[7]