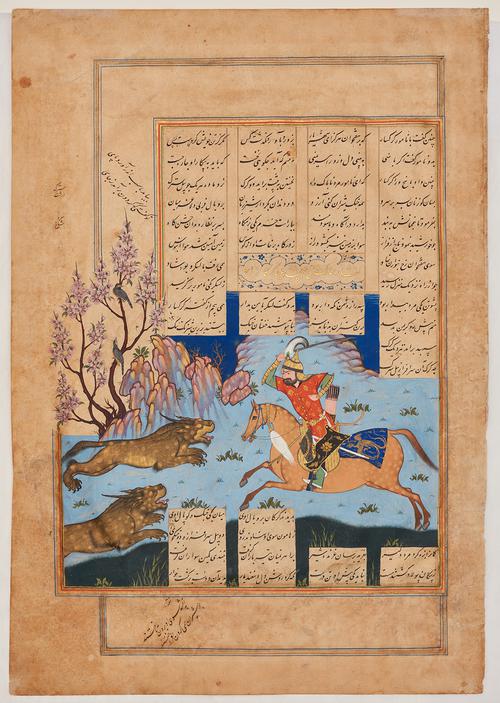 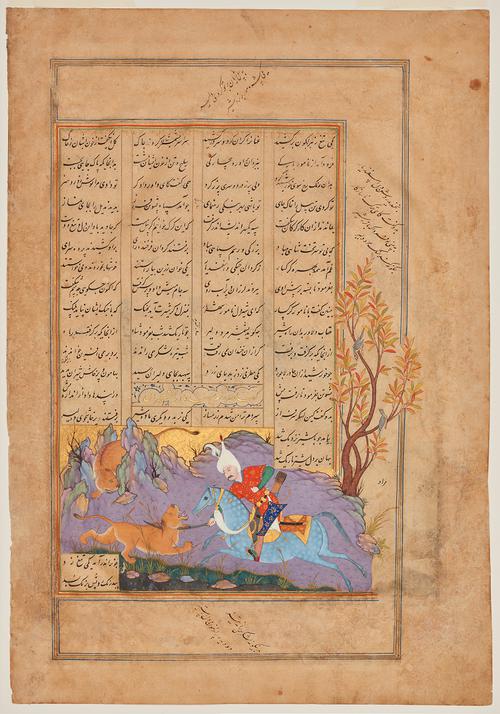 AKM102, Isfandiyar kills the lions, Back 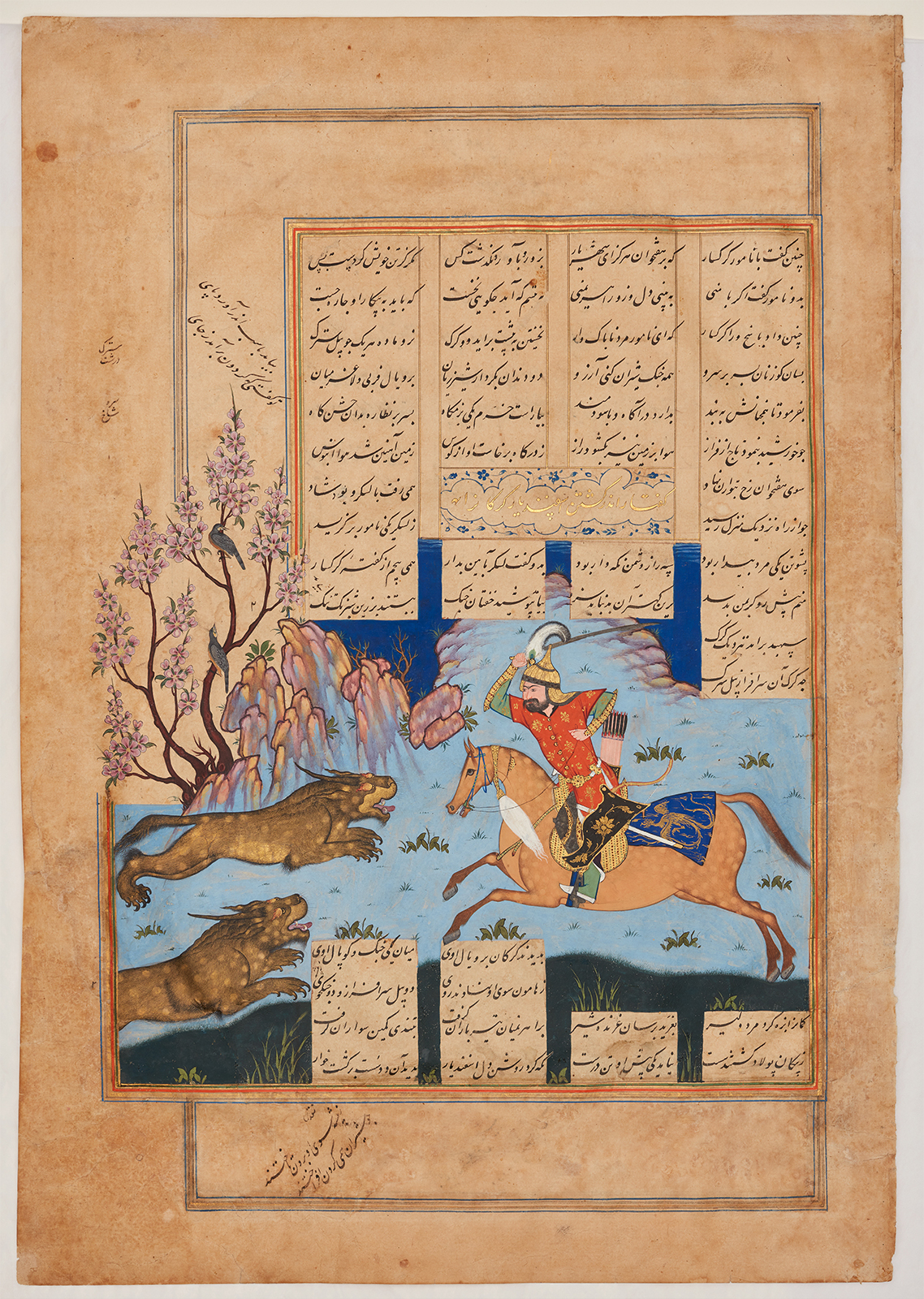 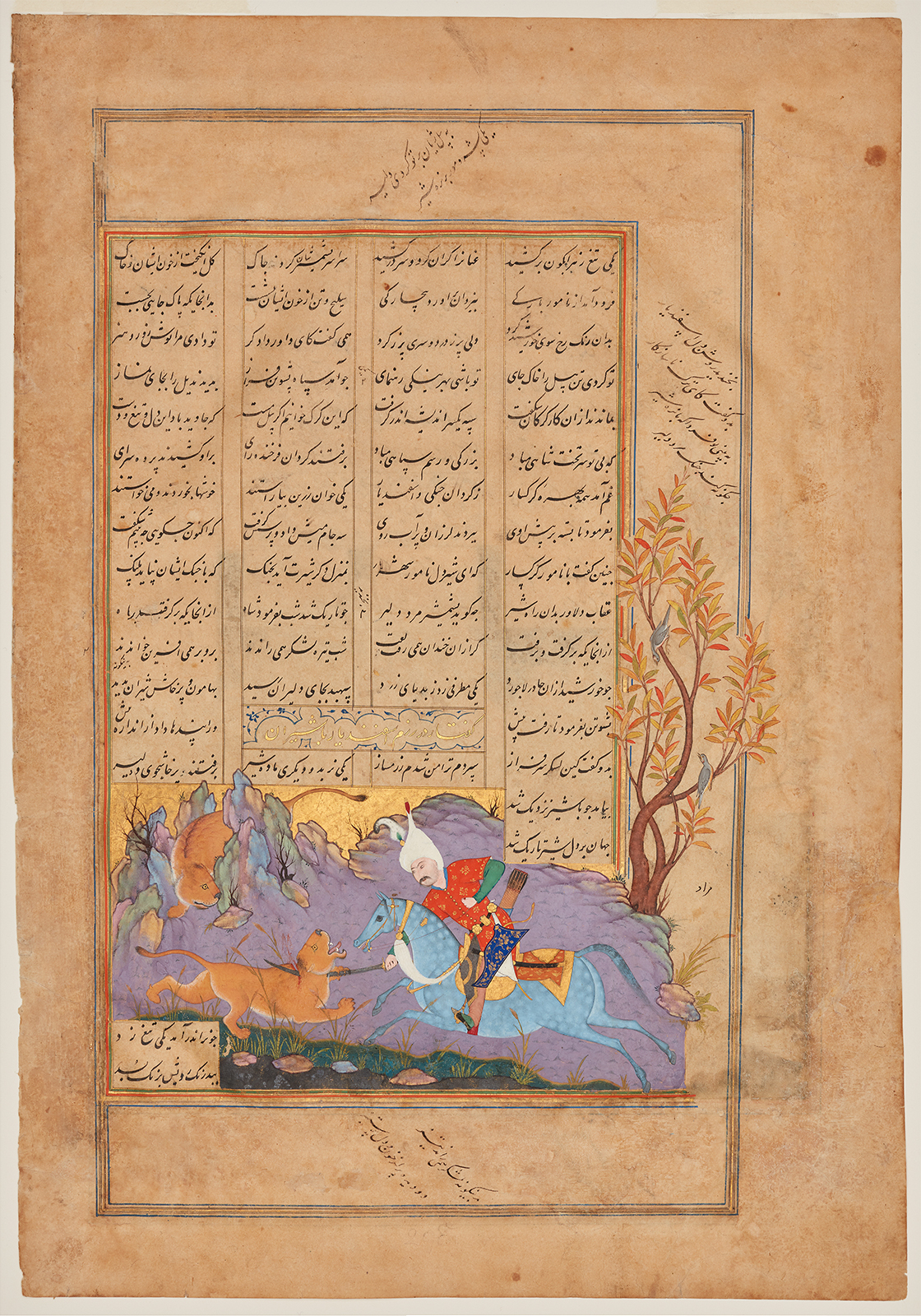 This is the second of three paintings in the Aga Khan Museum Collection that illustrate episodes from the Haft Khwan (“seven labours”) of Prince Isfandiyar. Isfandiyar was sent by his father Gushtasp to rescue his sisters from the Bronze Fort of Arjasp, with the false promise of the crown should he succeed. After defeating monstrous wolf-like creatures (as illustrated on the recto of this folio), Isfandiyar must defeat two fierce lions, a male and a female. The name of Murad Dailami, a fine but little-known artist, appears in the painting’s right-hand margin. Murad also painted the most frequently illustrated episode in which Isfandiyar fights a dragon (easily the most popular of Rustam’s seven labours as well; see AKM100).

Isfandiyar’s fight with the lions takes place in a narrow band across the bottom of the page and the artist has given himself more room by extending the painting beyond the frame: the outer margin was clearly drawn after the painting was completed. The slim tree and the two birds echo the features of the previous picture, executed by Naqdi, as do the mountains above and the stream below, but Murad’s style is much softer and more lyrical.[2]

The text above the page follows on from the account of Isfandiyar’s fight with the wolves, which is followed by feasting and the moment when Isfandiyar learns of his next trial. Two verses mistakenly omitted can be found in the margin, their correct place marked by a sign in the central column.[3] The rubric above the painting introduces Isfandiyar’s encounter with the lions, and the painting follows the text in showing the male lion being killed first. The last two verses that frame the painting are reversed here, compared with the standard editions.

Notes
[1] Shah Ismail II was the third ruler of the Safavid dynasty (1501–1722). Reuniting the eastern and western provinces of Iran, the Safavids introduced Shiite Islam as the official state religion. Ismail II, son of Tahmasp (r. 1524–76), seems to have been inclined to return to Sunnism, but in this and his artistic patronage he was perhaps simply seeking to distance himself from his father’s regime. He was murdered after ruling for 18 months.
[2] See Welch, Artists for the Shah, 212.
[3] Shahnameh, ed. Mohl, “Gushtasp,” verses 1643-1644; ed. Khaleghi-Motlagh, “Haft khwan,” verses 104–105.