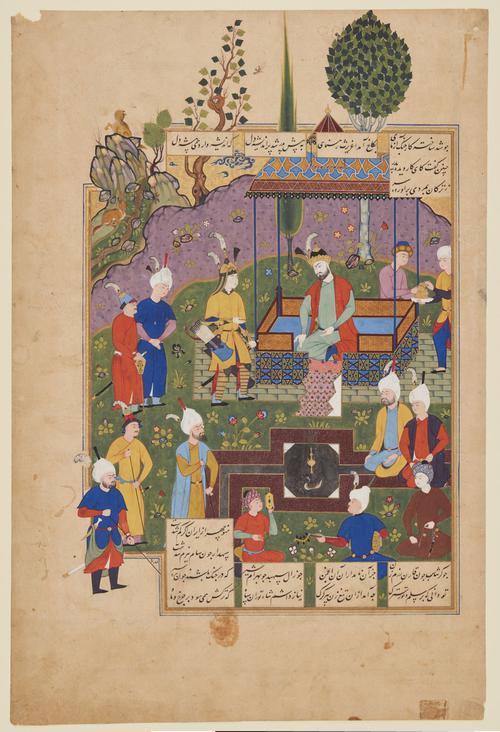 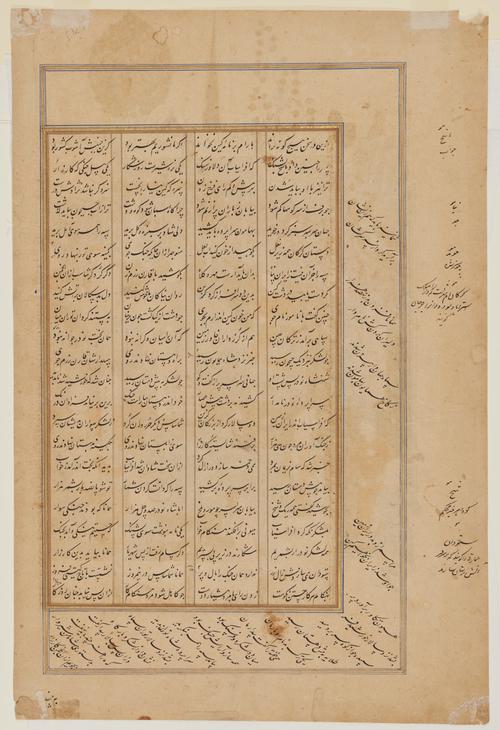 AKM72, Pashang discusses the invasion of Iran, Back 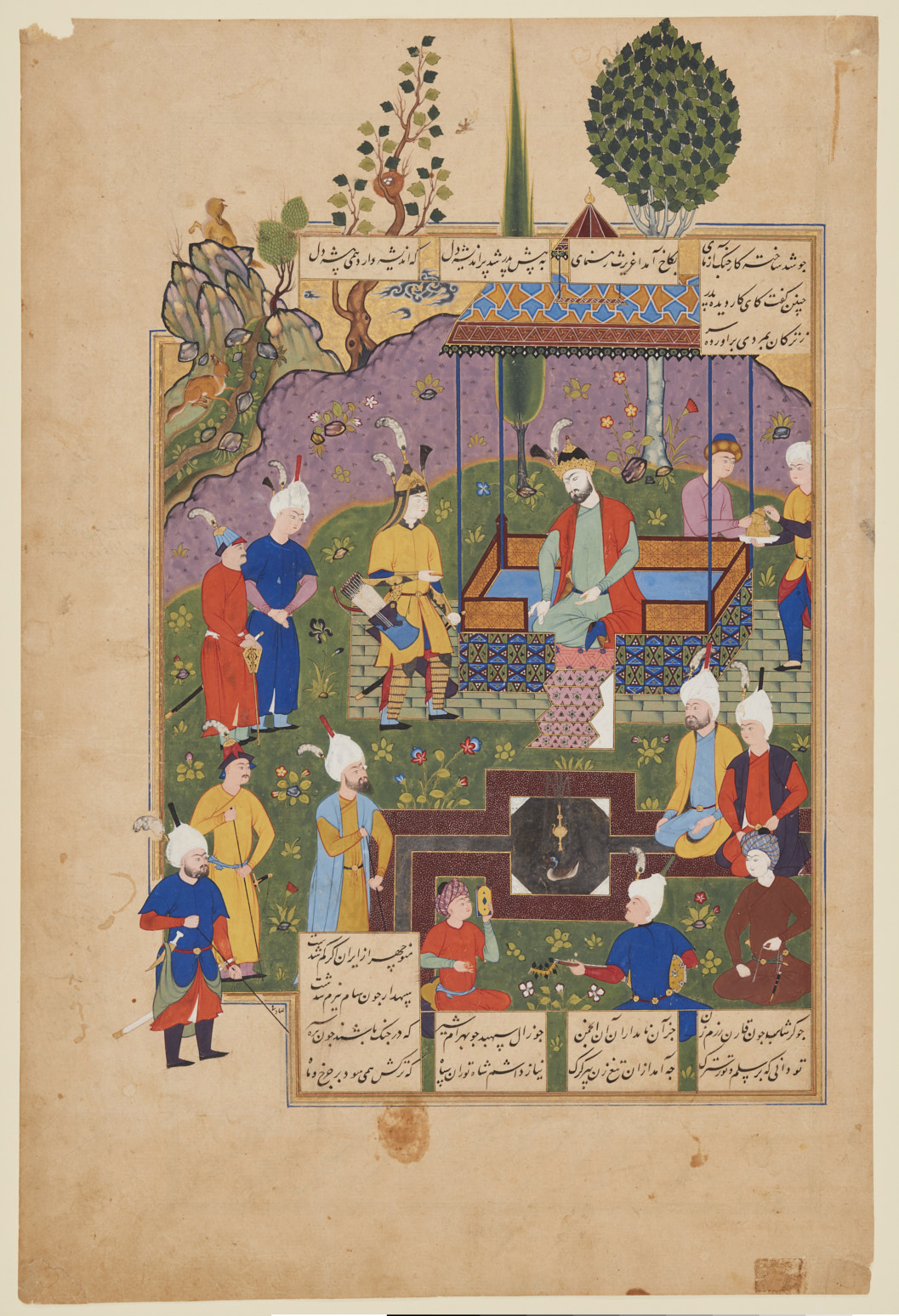 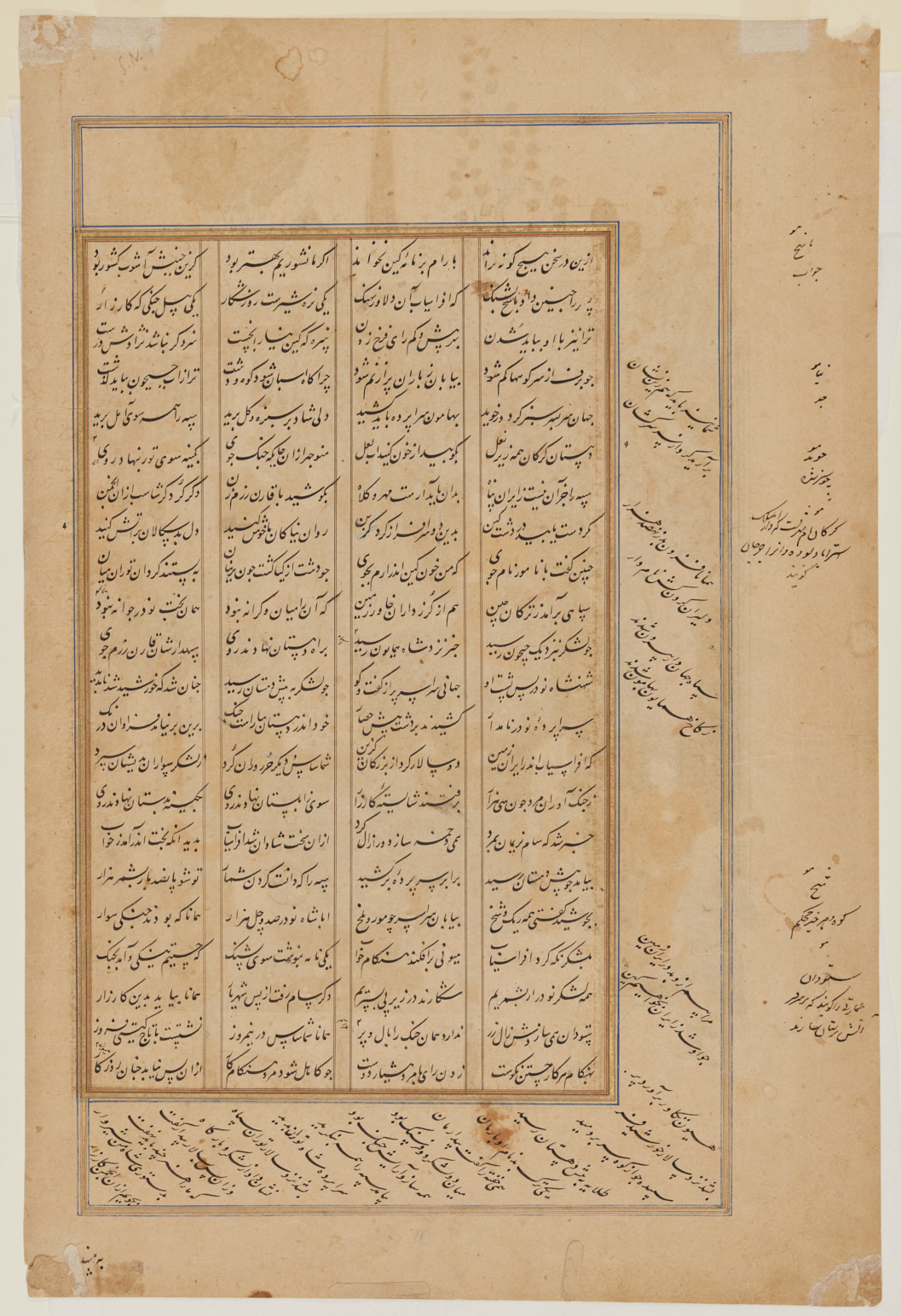 Pashang discusses the invasion of Iran

This painting illustrates an episode after the deaths of Salm and Tur, whose murder of their younger brother Iraj was avenged by Manuchihr. After Manuchihr himself is killed, Pashang converses with his son, Afrasiyab, discussing the opportunity to take revenge by invading Iran, now ruled by the new shah, Nauzar. The young prince, a Turanian hero and the main enemy of the Iranians throughout the first part of the epic, is dressed in yellow and armed for war. He is eager to lead an expedition to Iran at what seems to be a propitious moment.

Although Sadiqi Beg has caught the solemn mood of the occasion (despite the musician playing and the young page studying himself in a mirror) [3] he has evidently not chosen to follow the verbal context of the scene he is illustrating. The text surrounding the painting actually concerns a later moment in the story: once war is decided, Afrasiyab’s wiser brother Aghriras approaches their father and counsels prudence. He draws attention to the fact that the Iranians still have many champions, and that starting another war will merely lead to the destruction of the kingdom. Among these champions, the text names Zal and Bahram, “who were like male lions in battle,” a verse not found in the standard editions of the epic, interpolated beneath the painting.4

Like other paintings in this copy of the Shahnameh (see AKM71 and AKM99), “Pashang discusses the invasion of Iran” extends into the left-hand margin. From there, the painting is taken up into the columns between the text and breaks through the single ruled margin. The attribution to Sadiqi appears in the angle between the bottom left of the frame and the stick held by the attendant. The rocky outcrops and animals, here two foxes, are characteristic of Sadiqi’s hand. The facial features and posture of the Turanian ruler Pashang are very similar to those of Faridun in another painting attributed to Sadiqi, “Faridun with the envoys of Salm and Tur” (AKM99). Anthony Welch contrasts the warmth and animation of the reception of Salm and Tur’s embassy [2] with the cold, stiff, and rather disturbing quality of Pashang’s depiction.

The choice of subject is itself unusual, if not unique. “Pashang discusses the invasion of Iran” in Ismail II’s Shahnameh is the first a depiction of this episode, and although the iconography is very general (a standard court scene with the enthroned monarch), Sadiqi Beg must have given some thought to how he would depict the topic, which initiated of a long series of wars between the Persians and the Turks in the Shahnameh.

Notes
[1] Shah Ismail II was the third ruler of the Safavid dynasty (1501–1722). Reuniting the eastern and western provinces of Iran, the Safavids introduced Shiite Islam as the official state religion. Ismail II, son of Tahmasp (r. 1524–76), seems to have been inclined to return to Sunnism, but in this and his artistic patronage he was perhaps simply seeking to distance himself from his father’s regime. He was murdered after ruling for 18 months.
[2] Welch, Artists for the Shah, 79–80.
[3] Or possibly, reciting poetry from an anthology.
[4] See Shahnameh, ed. Mohl, “Nauzar,” after verse 106; ed. Khaleghi-Motlagh, “Nauzar,” after verse 93.