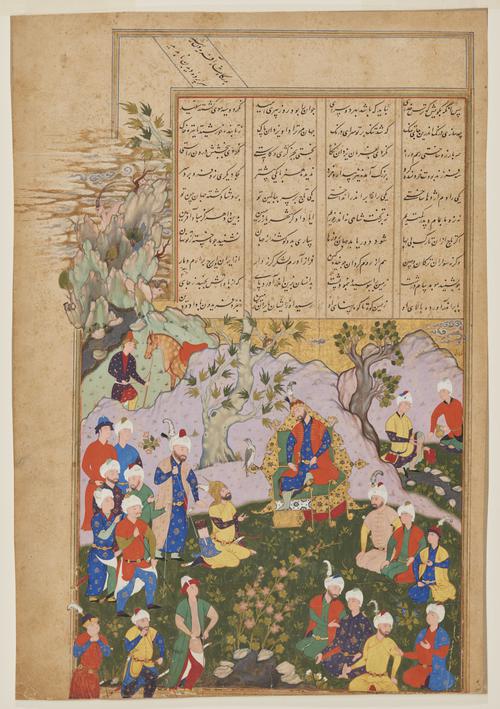 AKM99, Faridun with the envoys of Salm and Tur

AKM99, Faridun with the envoys of Salm and Tur, Back 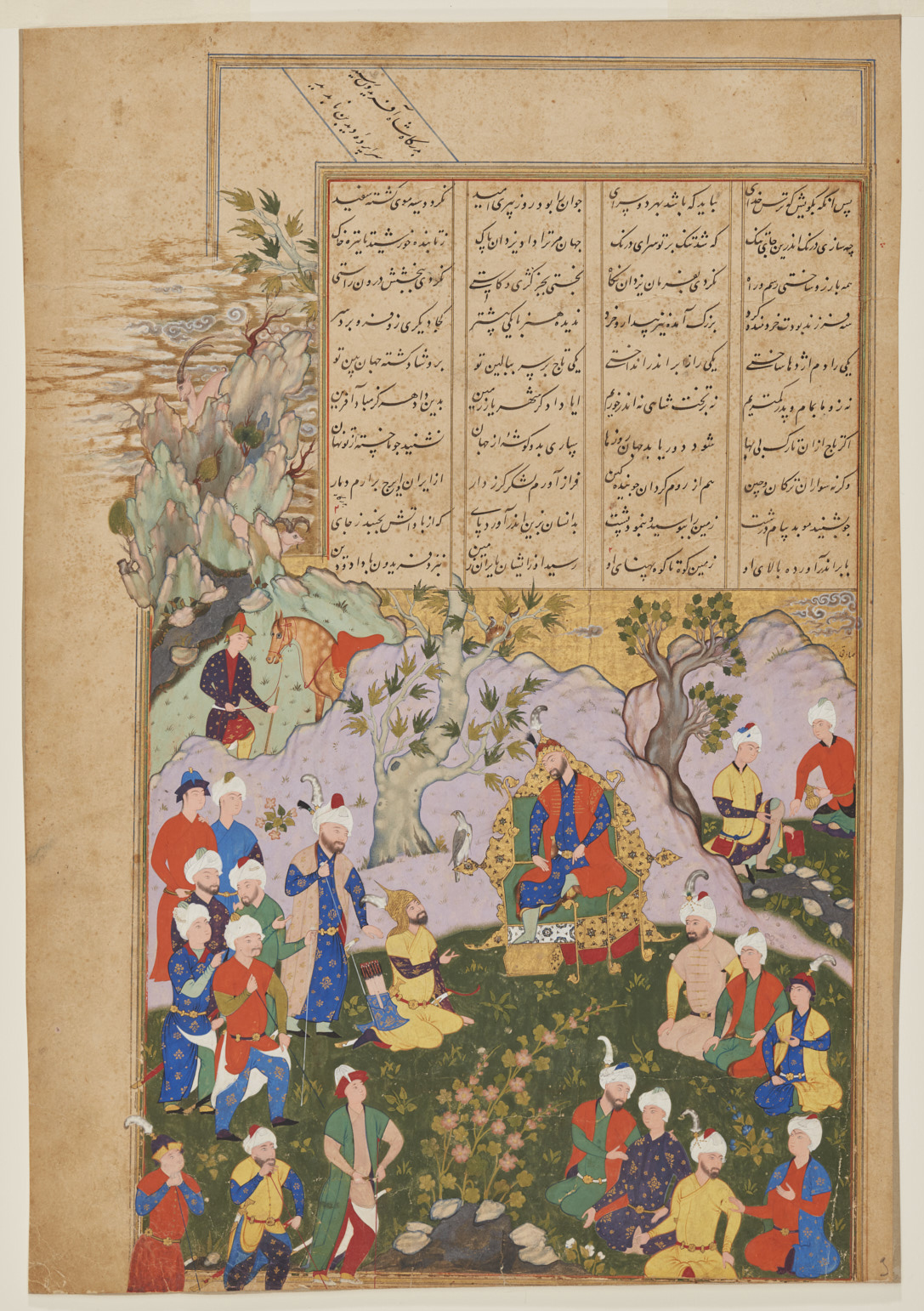 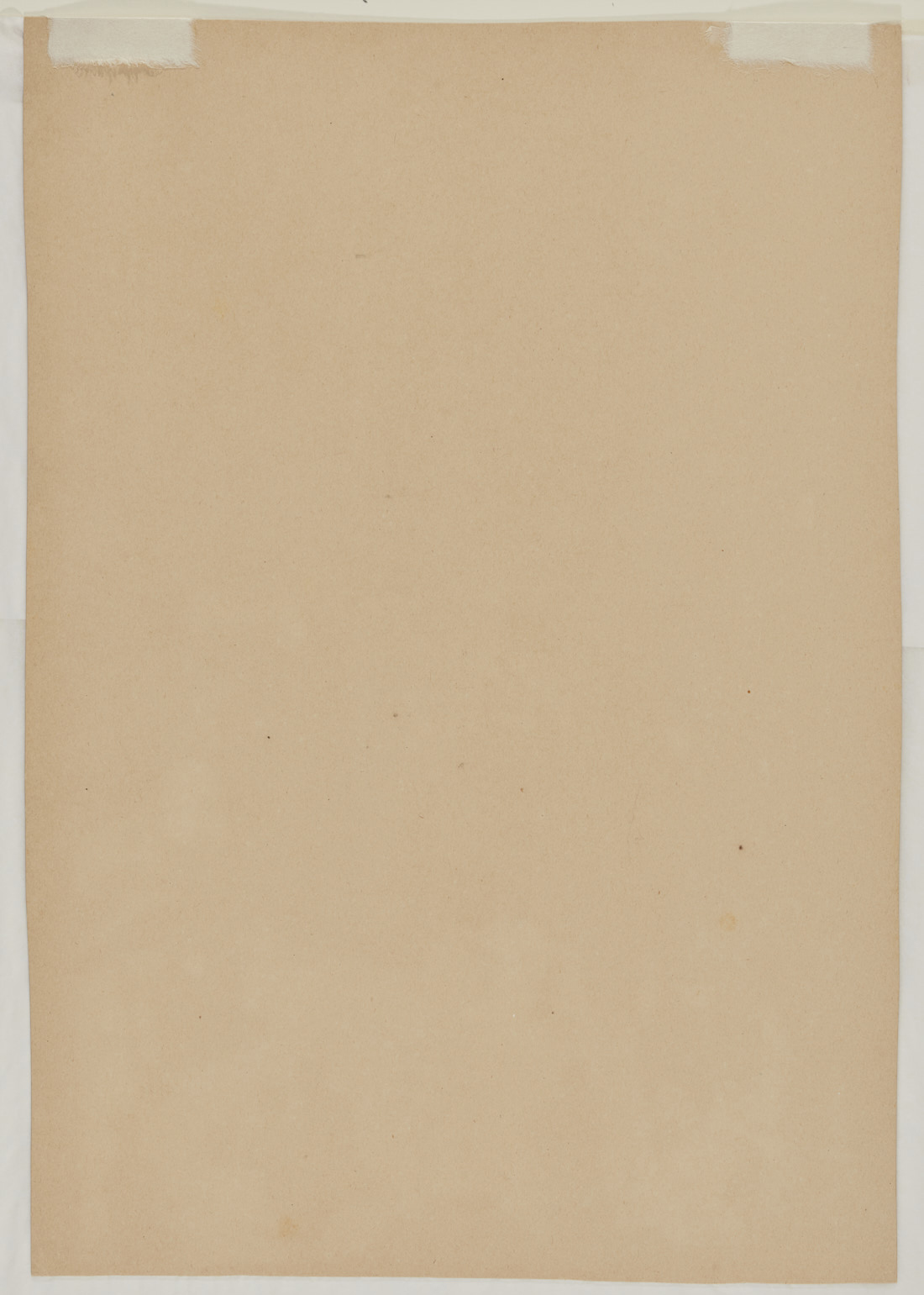 Faridun with the envoys of Salm and Tur

The painting illustrates the arrival at the court of Faridun of an envoy from two of his sons, Salm (to whom he had assigned the western reaches of the realm) and Tur (who received the East—that is, Turkestan or the lands of the Turks). The messenger, described as a mobad or priest (though not depicted this way), was to represent the brothers’ anger at this division. They resented the fact that their younger brother Iraj received the choice part of the world (Iran), and they threatened invasion if Faridun failed to alter his decision.[2]

The scene, which has few precedents, is essentially a parley or meeting between people representing two opposing sides of a dispute. Interestingly, previous examples are both found in significant commissioned copies of the Shahnameh: the “Big Head” manuscript, perhaps made for the young Shah Ismail I in Gilan in the 1490s, and the luxurious copy made for Ismail II’s father, Shah Tahmasp in the 1530s. Both of these illustrate the description of Faridun’s throne as surrounded by lions, leopards and elephants, which is narrated a little later in the text.[3]

The verse immediately before the painting is not found in the standard editions of the epic: “He (the mobad) came from them (the brothers) with justice and faith to Faridun, in the land of Iran.” The verse written at an angle in the top margin was omitted after the second verse in row 9, where the small red sign indicates it should be inserted. The folio appears to have been chopped off along the bottom. Such damage is a good example of the destructive way in which the Belgian art dealer Georges Demotte broke up the manuscript following its exhibition, intact, in Paris in 1912.[4]

The format of the page is similar to that of “Zahhak consults the physicians” (AKM71). Here, however, the painting fits around the text, whereas in the previous case, it is as if the text were superimposed on the picture. The difference in painting technique is marked, despite the ostensibly similar composition of the rocky outcrop, tree, and stream in the left-hand margin. The figures are smaller and more numerous, their gestures more lively.

Sadiqi Beg was starting his career at this time, a student of the celebrated Muzaffar ‘Ali (d. 1576). Thanks to his own writings, we are better informed about Sadiqi than many other Safavid artists; his chequered and eventful career at the court of Shah ‘Abbas ended in 1610. Seven paintings in the Shah Ismail II Shahnameh are attributed to him, and a total of three are held in the Aga Khan Museum Collection (AKM99, AKM72, AKM100).[5]

Notes
[1] Shah Ismail II was the third ruler of the Safavid dynasty (1501–1722). Reuniting the eastern and western provinces of Iran, the Safavids introduced Shiite Islam as the official state religion. Ismail II, son of Tahmasp (r. 1524–76), seems to have been inclined to return to Sunnism, but in this and his artistic patronage he was perhaps simply seeking to distance himself from his father’s regime. He was murdered after ruling for 18 months.
[2] See for the episode, and the text here, Abbas Amanat, “Divided patrimony, tree of royal power, and fruit of vengeance: Political paradigms and Iranian self-image in the story of Faridun in the Shahnama,” in Shahnama Studies I, ed. Charles Melville, Cambridge: Centre for Middle Eastern and Islamic studies, 2006, 49-70, esp. p. 58. Shahnameh, ed. by Jules Mohl, “Faridun,” verses 345–364; ed. by Djalal Khaleghi-Motlagh, “Faridun,” verses 323–42.
[3] The “Big Head” manuscript, perhaps made for the young Shah Ismail I in Gilan, Istanbul, Turk ve Islam Eserleri Muzesi, MS 1978, fol. 29v; Shah Tahmasp Shahnama, Tehran, Museum of Contemporary Art, fol. 44v. Another version of the same scene was made later, for the Shahnama commissioned by Shah ‘Abbas, Dublin, Chester Beatty Library, Per. 277.07b.
[4] Robinson, “Ismail II’s copy,” 7.
[5] Welch, Artists for the Shah, 41­­–99; Robinson, “Isma‘il II’s copy of the Shahnama,” 6. For this painting, Sheila R. Canby, Princes, Poets & Paladins, 58­–59 and pl. 33; Welch, Artists, 80–85 and pl. 5.