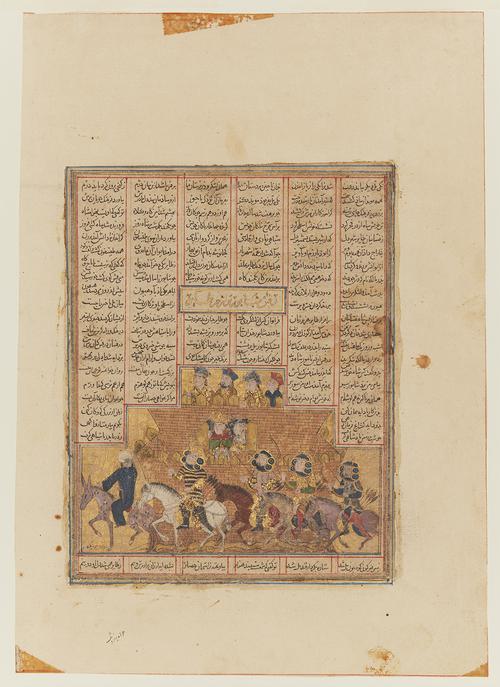 AKM17.1v, Shapur Besieges A Fortress Of The Ghassanid King Ta’ir 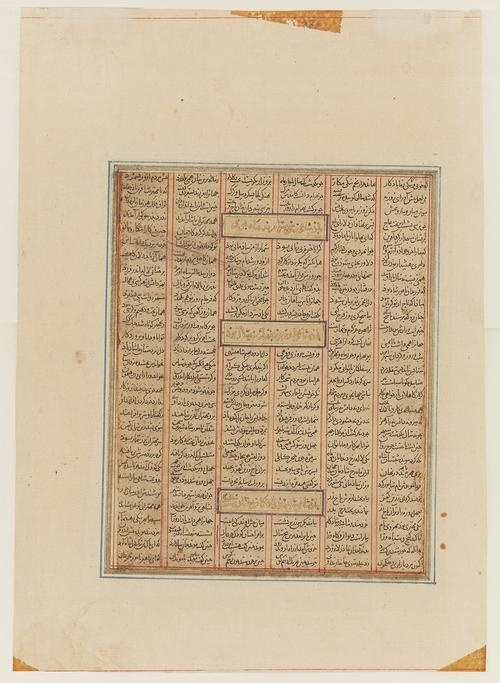 AKM17.1r, Shapur Besieges A Fortress Of The Ghassanid King Ta’ir 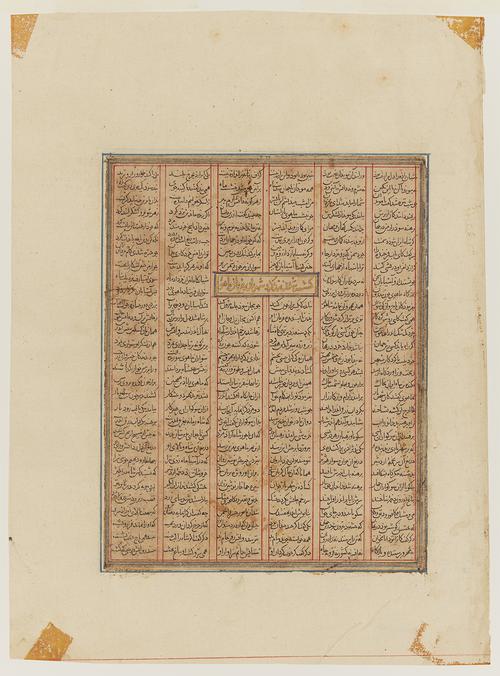 AKM17.2r, Shapur Besieges A Fortress Of The Ghassanid King Ta’ir 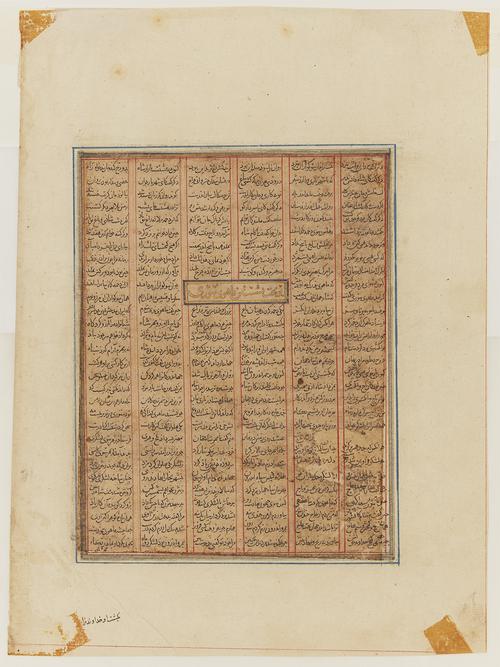 AKM17.2v, Shapur Besieges A Fortress Of The Ghassanid King Ta’ir 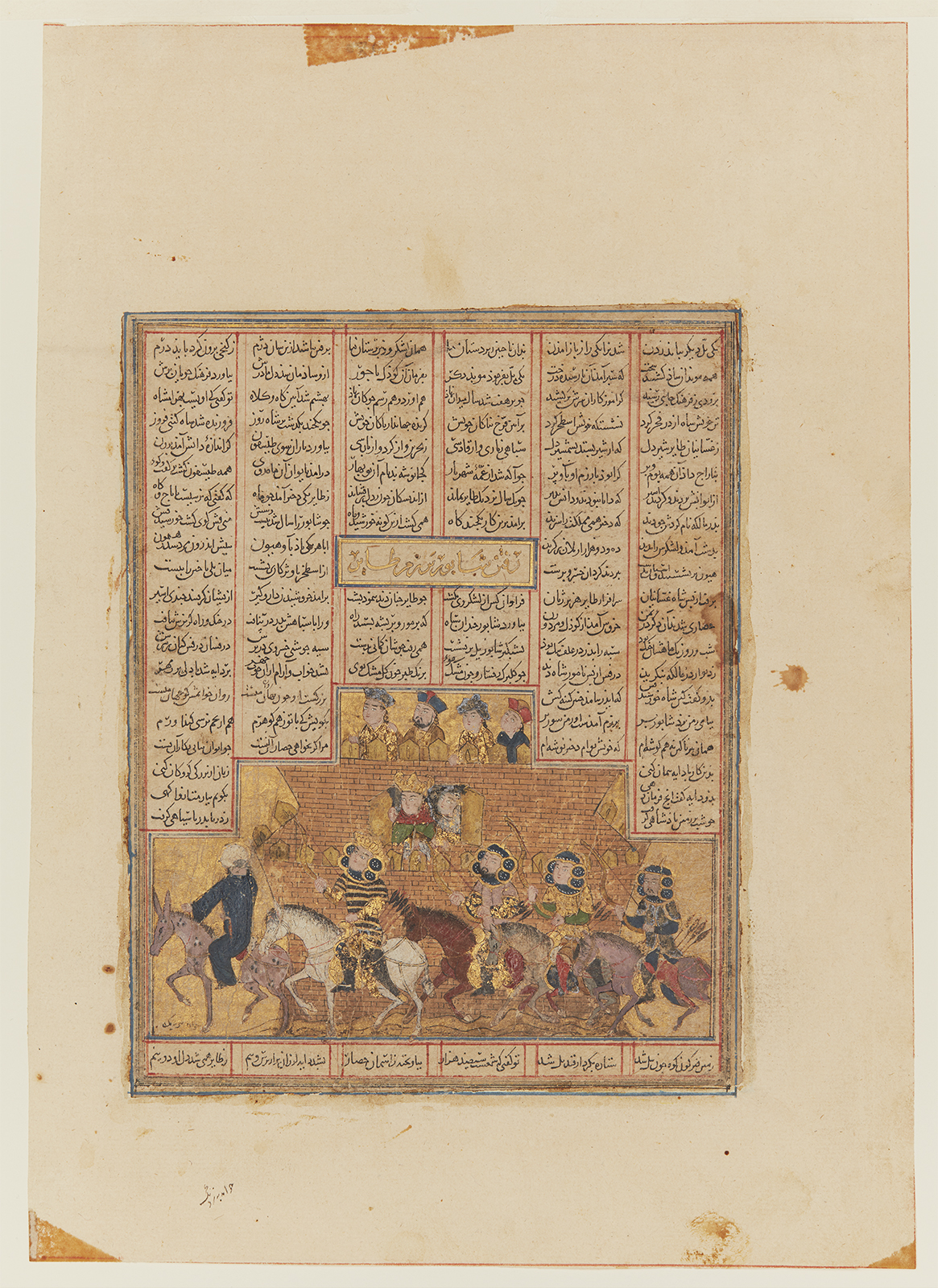 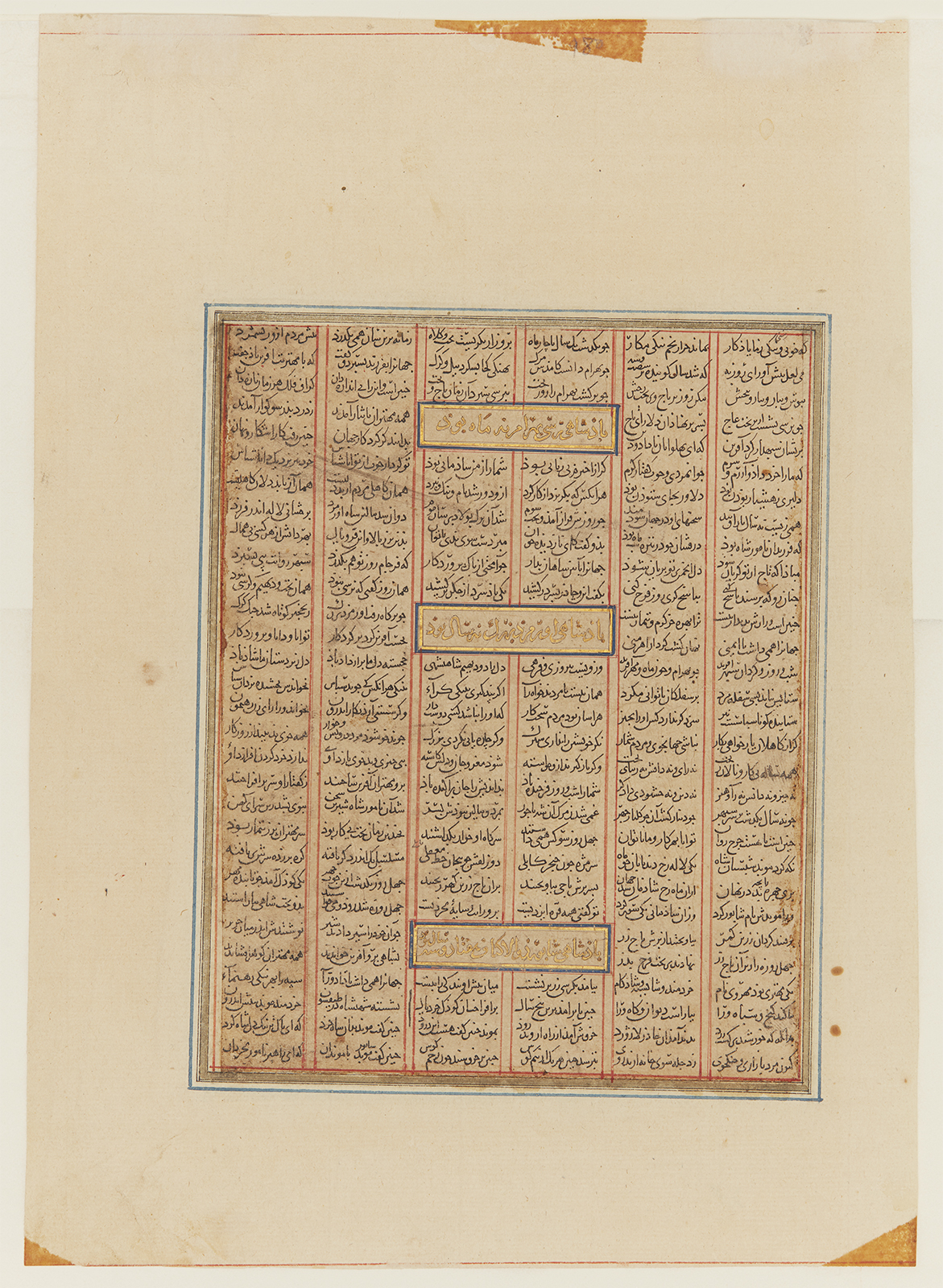 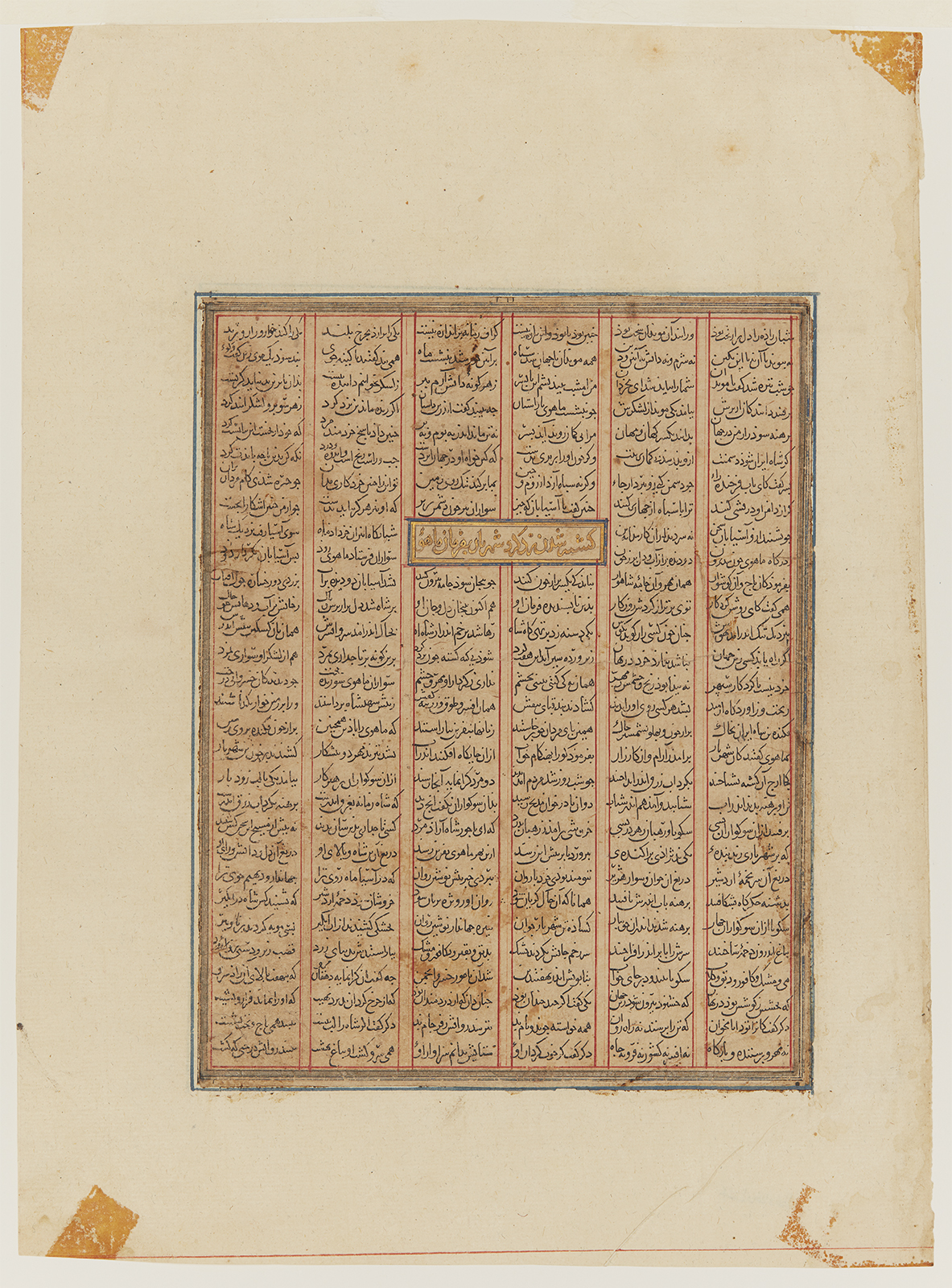 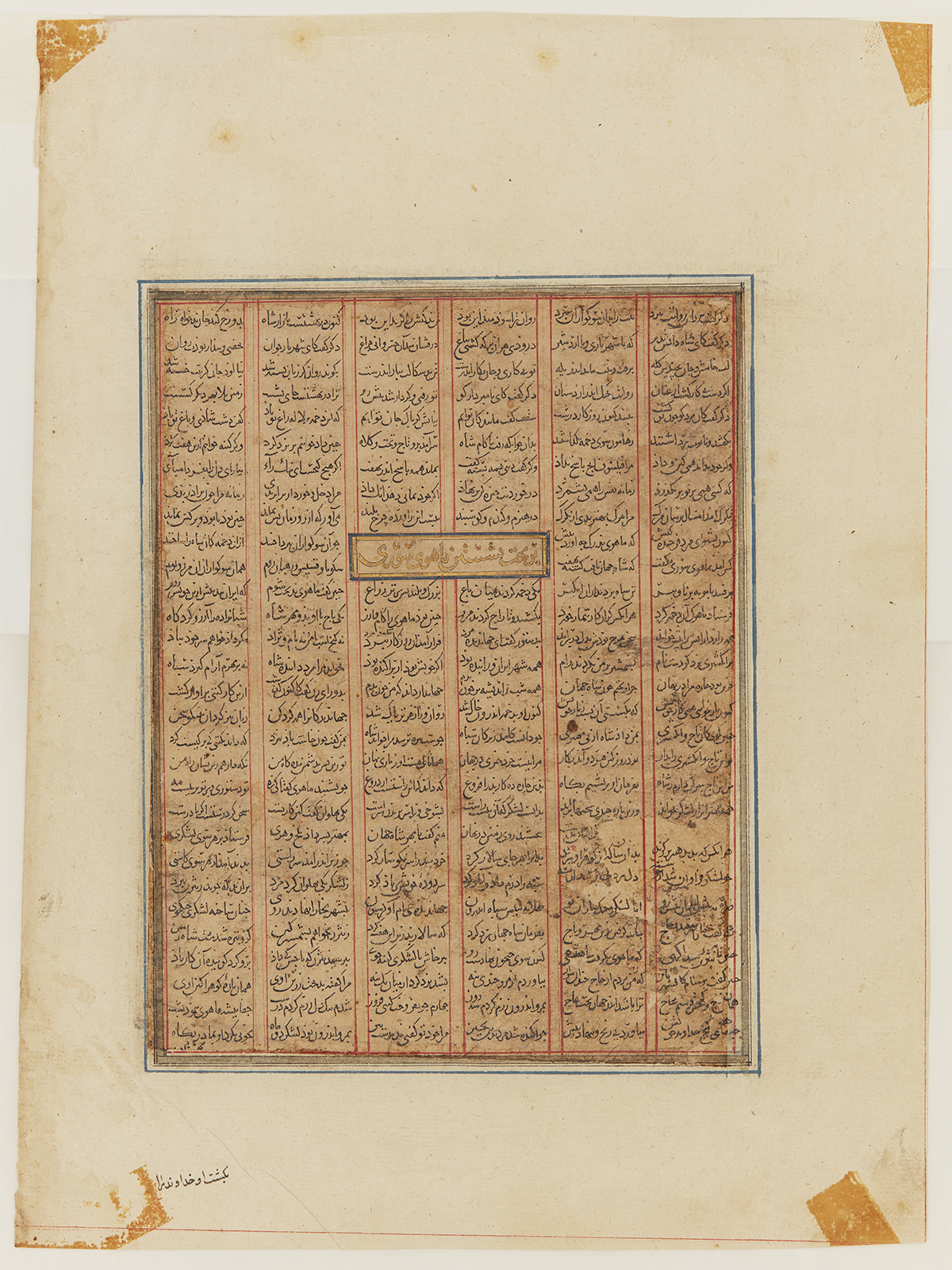 Shapur Besieges A Fortress Of The Ghassanid King Ta’ir

Firdausi describes Shapur’s armour on the occasion as black; and the crowned figure on the white horse who leads his troops into the painting wears black-and-gold lamellar armour as well as a golden crown (instead of the black-sashed helmet the poet also describes). On watching the Persians approach, Malika falls instantly in love with her cousin, determines to revenge her mother’s ill-used capture by her father, and offers both herself and the fortress to the Sasanian Shapur. This instant attraction does not go unnoticed by the nurse, the veiled lady at the right: she directs a quizzical gaze at the princess as her fate, and that of her father, are both taking shape.[2]

This folio is one of the more interesting paintings of the ensemble, being twice “stepped” at its top. The painter took “structural” advantage of the six-column layout to show both the moated brick fortress (with the open window from which a small but significant drama will unfold), and the upper rampart, where a row of defenders is ranged behind the topmost crenellations. Around and above it, the sky is still the usual gold colour, but the fortress of the Ghassanid Arab Ta’ir, visibly surrounded by water, is the true setting for this rather sedate image of invasion and siege. However, from the event will flow eventual retribution.

Notes
[1] See Marianna Shreve Simpson, The Illustration of an Epic. The Earliest Shahnama Manuscripts (New York and London: Garland, 1979), 380–82.  The “First Small” Shahnameh has nearly eight times as many—including another version of this painting; but its illustrative program is also two and one-half times larger: Simpson 1979, 373–8; Sims, Table I, 14th-Century Illustrated Shahnameh MSS (Eleanor Sims, The Tale and the Image [a catalogue of historical and Shāhnāmah manuscripts and paintings in the Nasser D. Khalili Collection of Islamic Art] (Volume XXV, forthcoming in 2019).
[2] The “First Small” Shahnameh includes a painting of the same episode, also stepped and similarly composed but more crowded and less coherently presented; the primary element—Malika and her nurse—are reversed, as are the defenders at the top of the picture, while another detail, Shapur’s black armour, is entirely missing: Chester Beatty Library, Per 104, folio 54; Simpson 1979, 392, Ill. 97.