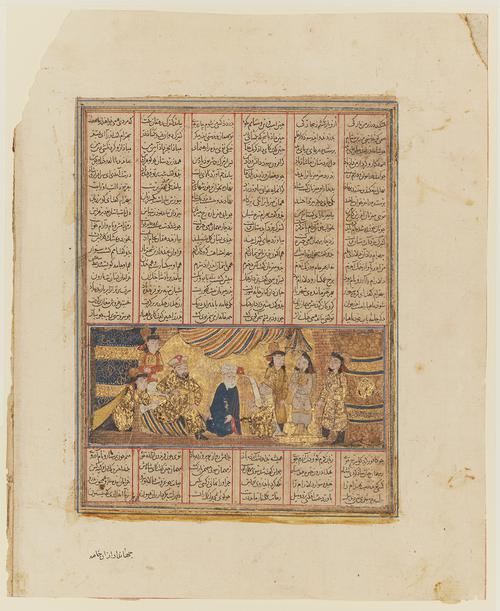 AKM16.1v, Bahram Entertained By Arezu, Daughter Of Mahyar The Jeweller 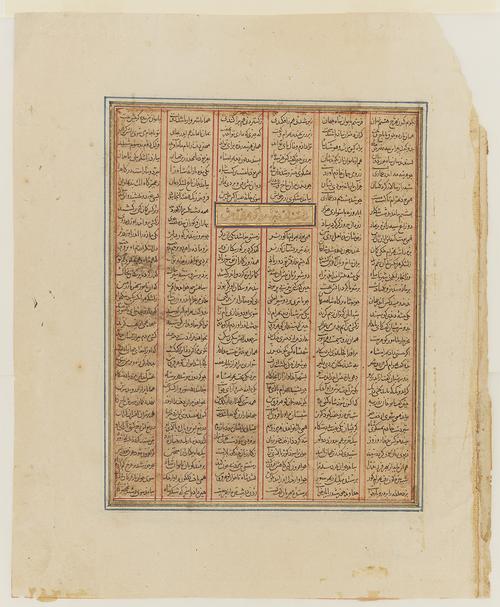 AKM16.1r, Bahram Entertained By Arezu, Daughter Of Mahyar The Jeweller 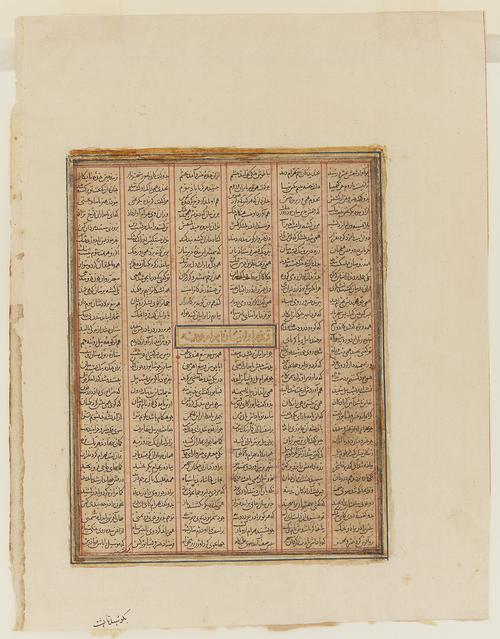 AKM16.2v, Bahram Entertained By Arezu, Daughter Of Mahyar The Jeweller 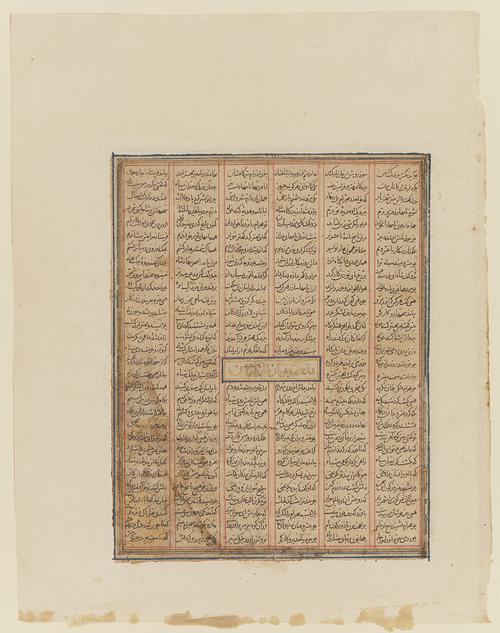 AKM16.2r, Bahram Entertained By Arezu, Daughter Of Mahyar The Jeweller 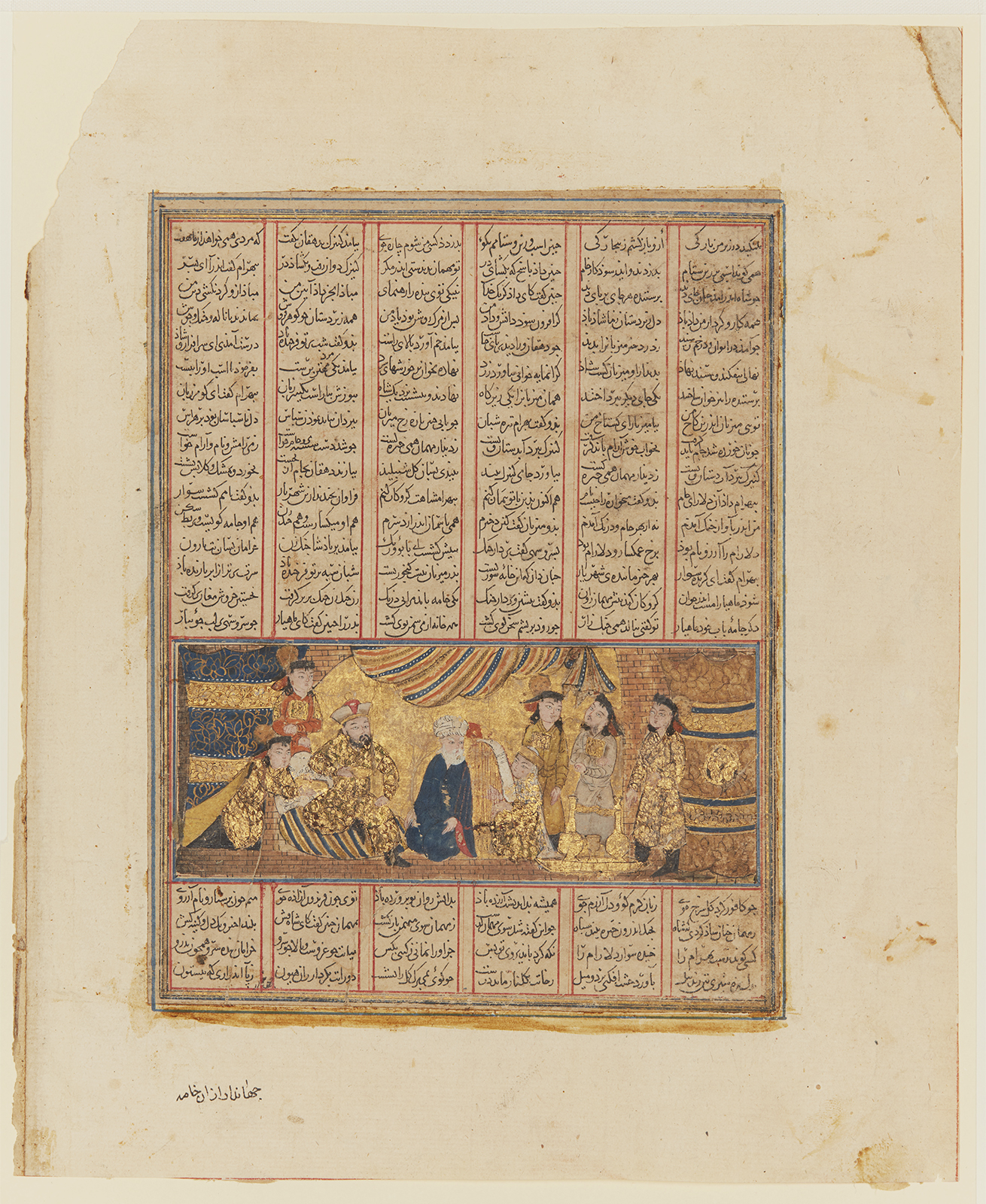 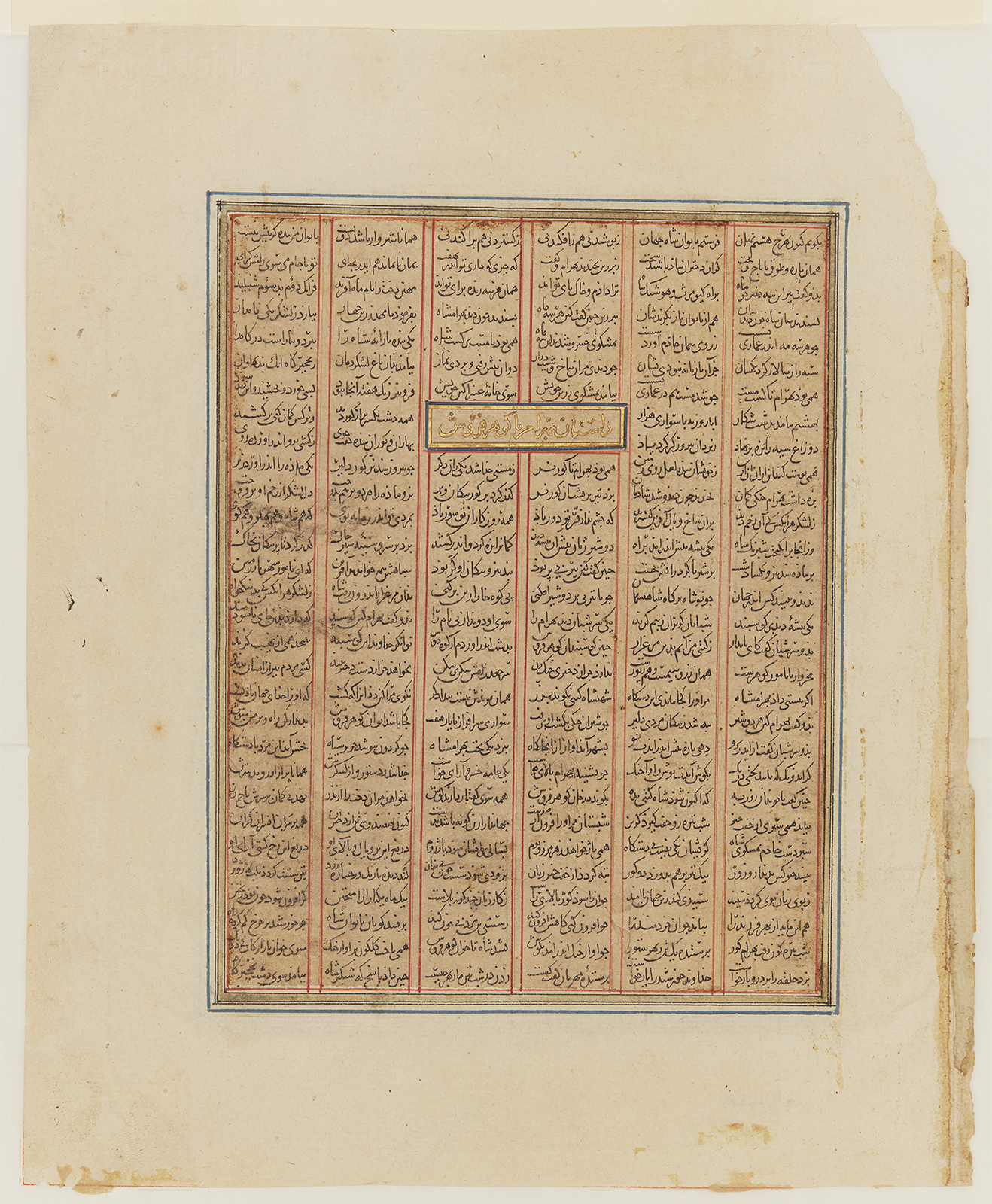 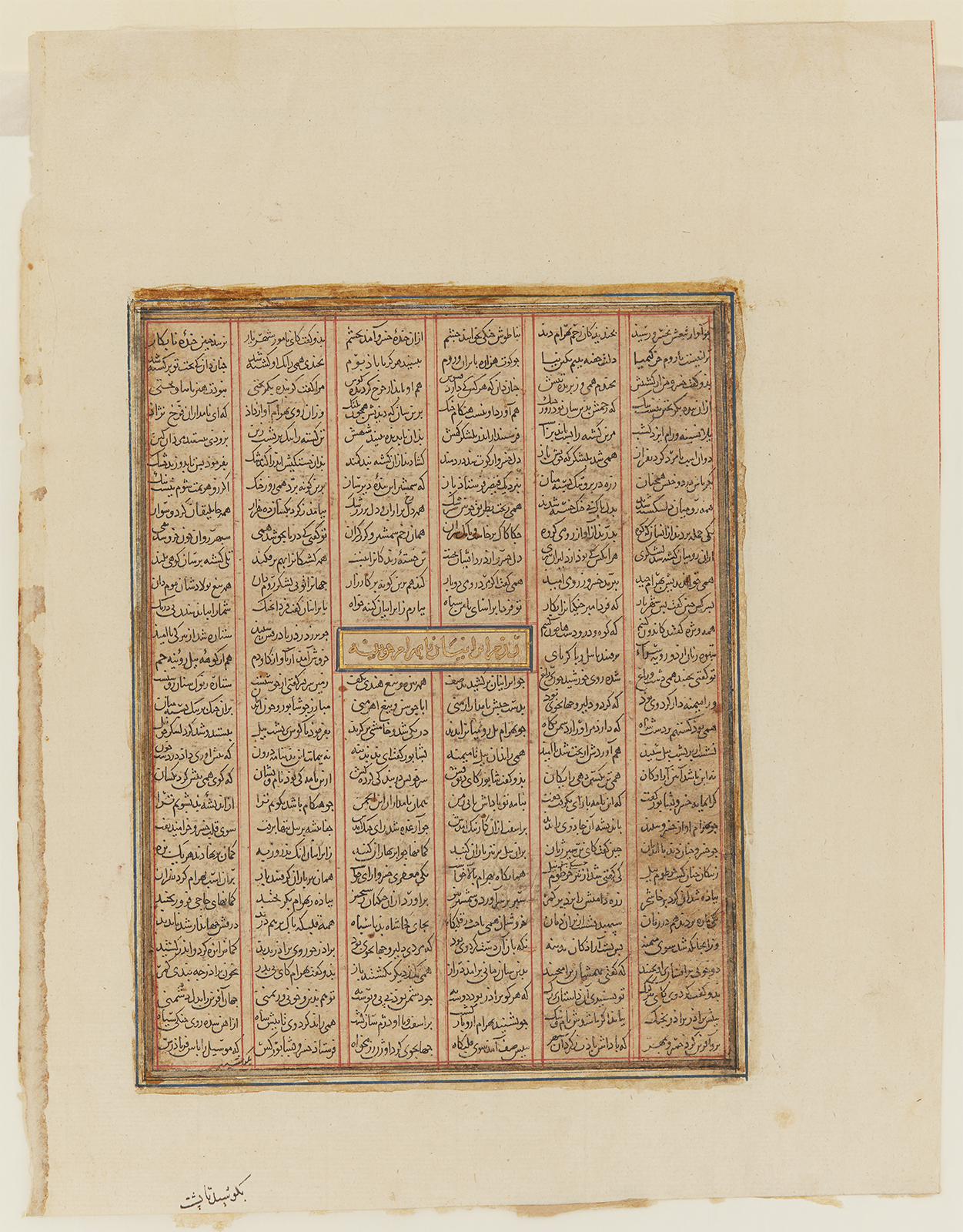 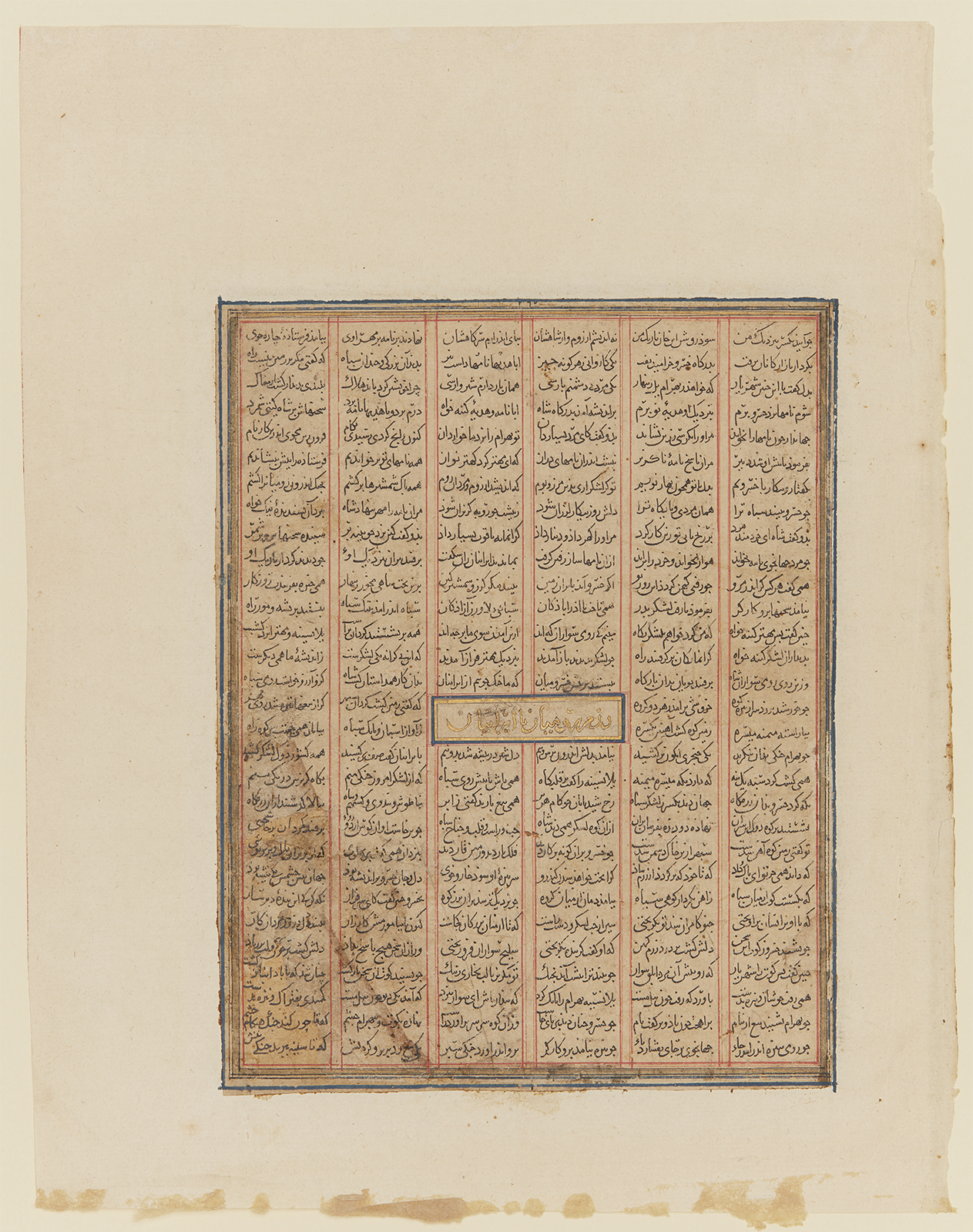 Bahram Entertained By Arezu, Daughter Of Mahyar The Jeweller

Here, Bahram is gold-robed but wears a simple cap. His attendants are also garbed in rich robes, either of golden fabric or with golden (Chinese) mandarin-squares on the breast, and all wear black Mongol caps trimmed with huge puffs of owl-feathers [1]. Mahyar’s sober dark-blue robe has red-lined sleeves; and he wears a high white turban. Arezu is the only woman in the painting; the jeweller’s daughter has large golden discs at her ear, and the white veil falling behind her is held in place at her brow by a wide golden fillet.

The evening’s entertainment finishes just as Bahram’s chief minister had predicted: “Now the king is going . . . to ask her father for that young woman’s hand.” The king’s actual identity remains unrevealed until the next morning, when the shah’s groom has hung Bahram’s jewelled golden whip on Mahyar’s door.

The painting is again designed as a horizontal strip extending across the written surface of the page but, in contrast to the first two paintings from this manuscript (AKM85, AKM18), this picture is an elaborately furnished interior scene.  A billowing striped curtain drapes the large arched golden opening in the middle of the picture, and equally lavish curtains hang at either side. Such textile richness accords with the subject of the story: one of the protagonists is the old jeweller, Mahyar, who is rich, with “donkey loads of fine jewels as well as gold and silver.”

Introduction to the “Second Small” Shahnameh

The “Second Small” Shahnameh, also now dispersed, is another of the earliest surviving illustrated copies of the Persian national epic composed by Abu’l-Qasim Mansur Firdausi (d. 1020). Firdausi composed it around the turn of the 11th century, conveying in more than 50,000 rhyming couplets the lives and adventures of 50 Iranian kings before the arrival of Islam.

The “Second Small” Shahnameh contains almost identical material to the “First Small” Shahnameh [2], though its contents are far more widely scattered. Both manuscripts were likely made at the same time and place: somewhere in western Iran towards the end of the 13th century, or very early in the 14th.[3] There are subtle technical differences between these copies. The “Second Small” Shahnameh has a somewhat different, and also larger program of illustration. Moreover, in their dispersal, each copy was treated differently: folios of the “Second Small” Shahnameh were almost never pasted onto a larger mount, as are so many from the “First Small” Shahnameh (including AKM19). This treatment has two primary implications. First, the text on the reverse of the folio can also be read; second, any illustration taken from it can be identified within the larger poem, ideally by reading the text in one of several Persian editions of Firdausi’s masterpiece.[4]

Four folios from the “Second Small” Shahnameh in the Aga Khan Museum amplify the themes and the range of early Shahnameh illustration: two focus on its heroic figures (AKM18, AKM85), while the other two illustrate episodes from the historical section, dealing with events in the lives of the Sasanian kings Shapur II (r. 304-379) (AKM17), and Bahram V (r. 420-438) (AKM16).

Notes
[1] The owl feathers in caps offer corroboration for a date. After the Mongol conquest, Ilkhanid male headgear distinguished rank and position by the feathers of different birds.
[2] The term coined by Ernst J. Grube in Muslim Miniature Paintings from the XIII to XIX Century from Collections in the United States and Canada (catalogue of an exhibition at the Cini Foundation, Venice, and Asia House, New York City), (Venice: N. Pozza, 1962), 22–8.
[3] Instead of “around 1300 in Baghdad,” a now-untenable attribution largely accepted since Simpson’s publication of 1979, 273–80.  This was based upon information in the colophon of a Persian copy of Sa‘d al-Din al-Varavini’s Marzban-namah (in the Library of the Archaeological Museum in Istanbul, MS 216); the manuscript was completed in Baghdad on 10 Ramadan 698/19 May 1299 but has just three small illustrations; see also Notes 4-5 for “First Small” Shahnameh.
[4] Critical editions of the Persian text: Firdausi Shakh-Name: Kriticheskii Tekst, ed. Y. E. E. Bertels, 9 vols. (Moscow, 1960–71); Abu’l-Qasim Firdausi Shahnamah, ed. S.M. Dabir Siyaghi, 5 vols. (Tehran, 1370 sh/1971); and Abu’l-Qasim Ferdawsi, The Shahnameh, ed. Djalal Khaleghi-Motlagh, 8 vols. (New York, 1988–2009).