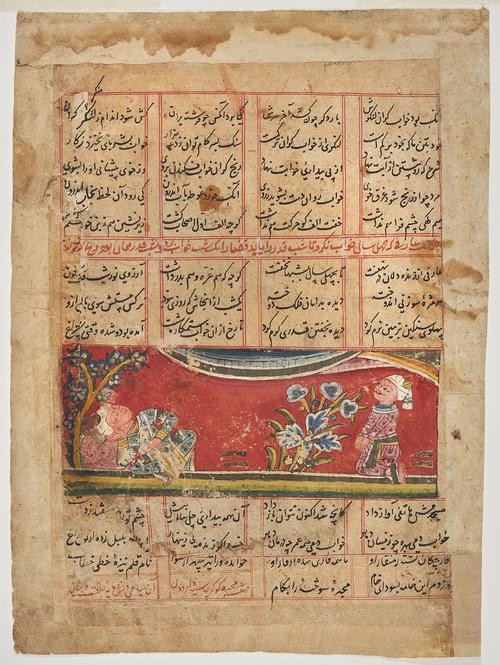 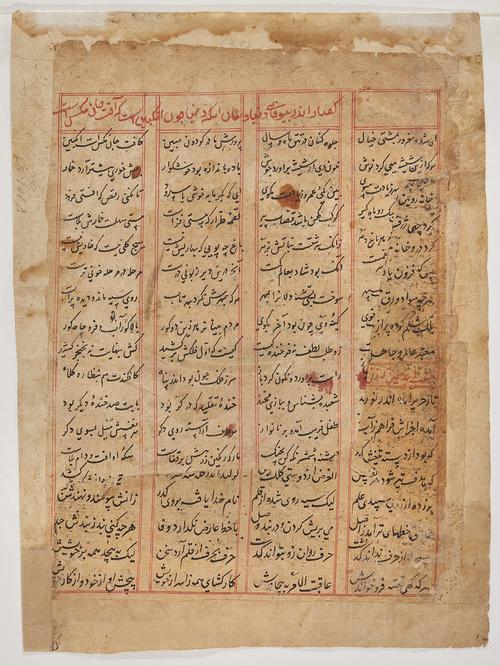 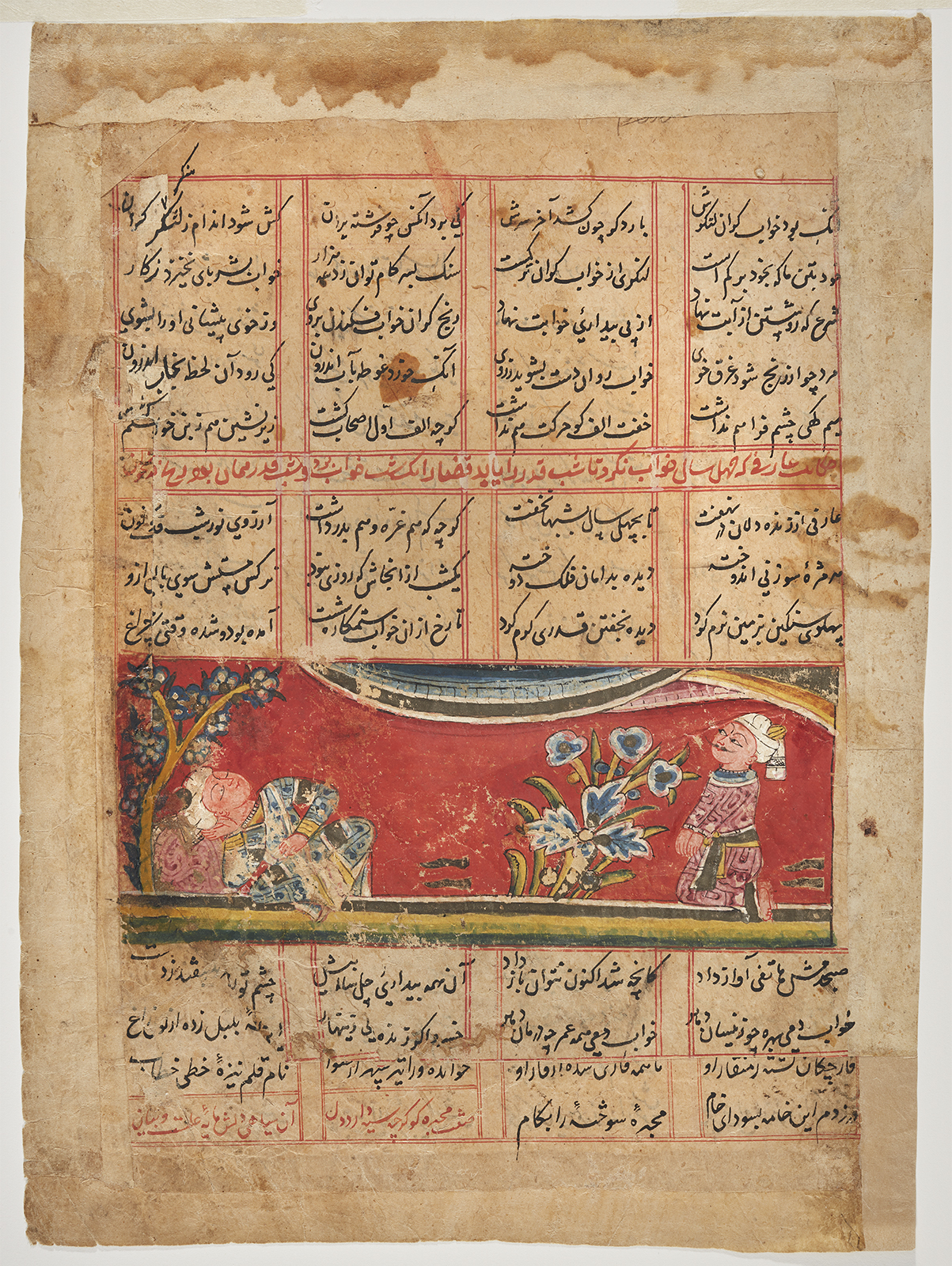 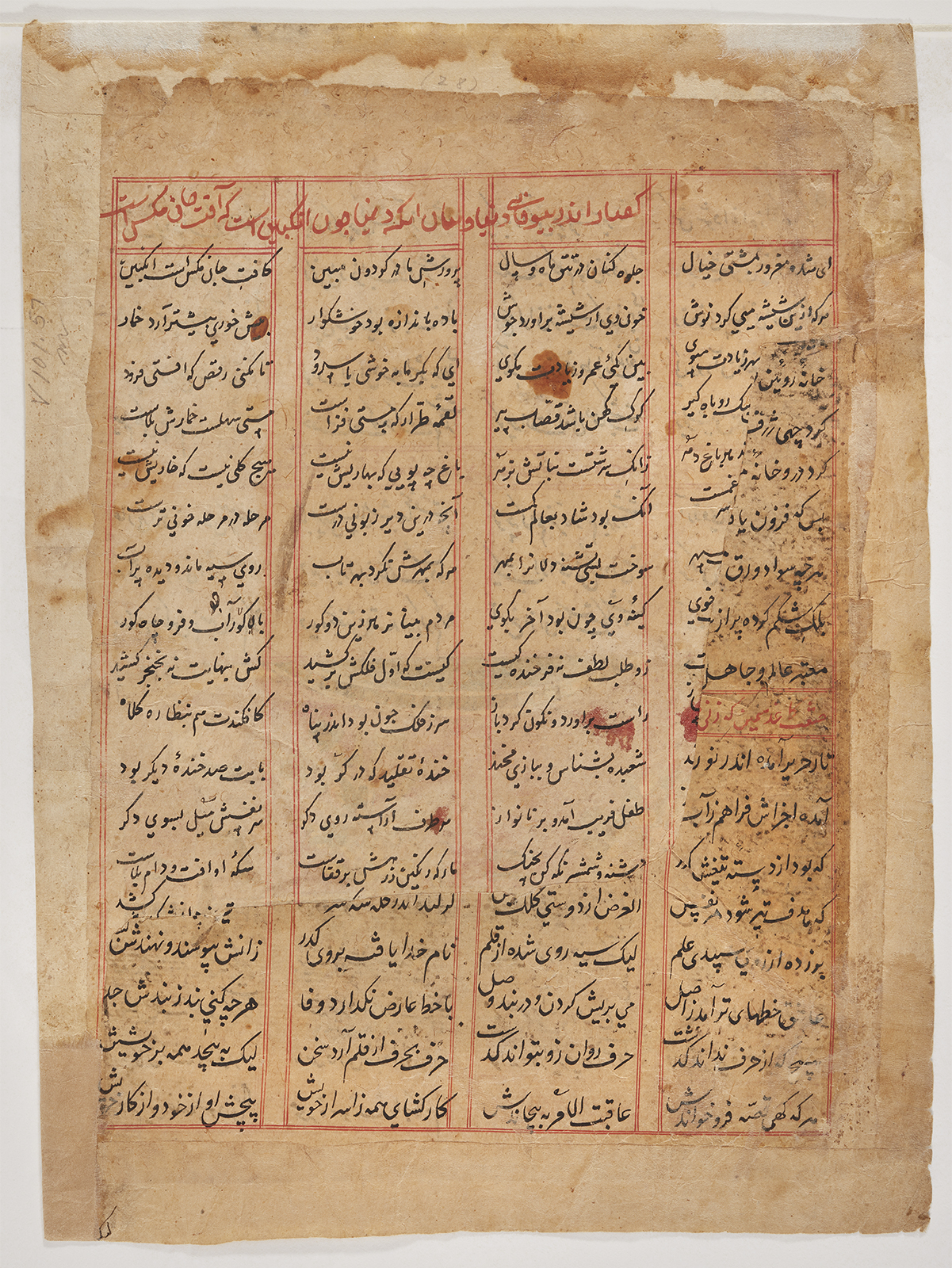 The Night of Power (Shab-i Qadr)

An excerpt from the first section of the Quintet, Matla‘ al-Anwar (The Ascent of Lights), surrounds the image in this folio. The passage narrates the story—the eighteenth in this section—of a mystic who remained awake for 40 years. He continually watched the night sky for the Night of Power (Shab-i Qadr), when the first verses of the Qur‘an were revealed to the Prophet Muhammad. This event, also known as Laylat al-Qadr, is celebrated on the twenty-seventh day of the month-long fast of Ramadan, which is recounted in Surat al-Qadr (the Sura of Determination).[4]

Khusraw’s poem recounts the story as follows: one night, the mystic drifts off to sleep, causing him to miss the long-awaited Night of Power. When he awakes, a heavenly voice informs the mystic that he has missed his chance, and that the long years spent waiting have been in vain.[5] The illustration depicts the mystic in two stages. At the right, a figure clad in a pink robe and white turban kneels behind a tall plant, his head lifted expectingly towards the sky. At the left, a figure in a white turban and robe peacefully sleeps in the shade of a blossoming tree. A crescent of grey colour descends upon the vivid red background, possibly illustrating the fall of nighttime and the appearance of the moon, which constitutes an important marker of time during the fast of Ramadan.

The dating and original place of production of this manuscript have long been disputed, namely due to the absence of a colophon, which would typically give the reader the year and location of the manuscript’s creation. The horizontal format of the illustration, located at the centre of two bands of text, is reminiscent of manuscript illustration in Egypt in the 14th century. However, some scholars contend that this image is characteristic of southern Iranian painting from the same period. Other dating attempts have been made on the basis of the calligraphy, which, it has been argued, places the manuscript firmly within the 15th century.[6]

These discussions often form part and parcel of scholarship on Islamic manuscript illustrations, and debates of this nature continue to be revisited. Most recently, the manuscript has been attributed to India in the 14th century, on the basis of similar illustrations whose year and place of production are more firmly documented.[7] This revision of the folio’s provenance would indicate that it was produced after Amir Khusraw’s death for the sultan Firuz Shah (r. 1320–25), who ruled in Delhi.[8]