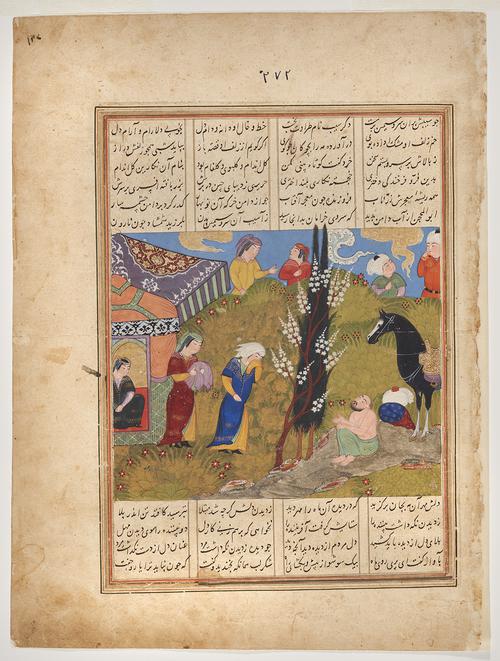 AKM44, The Maiden Gulandam and an Ardent Admirer 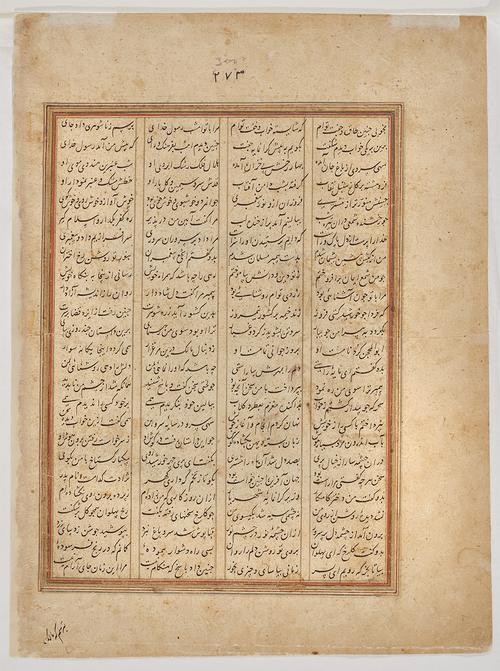 AKM44, The Maiden Gulandam and an Ardent Admirer, Back 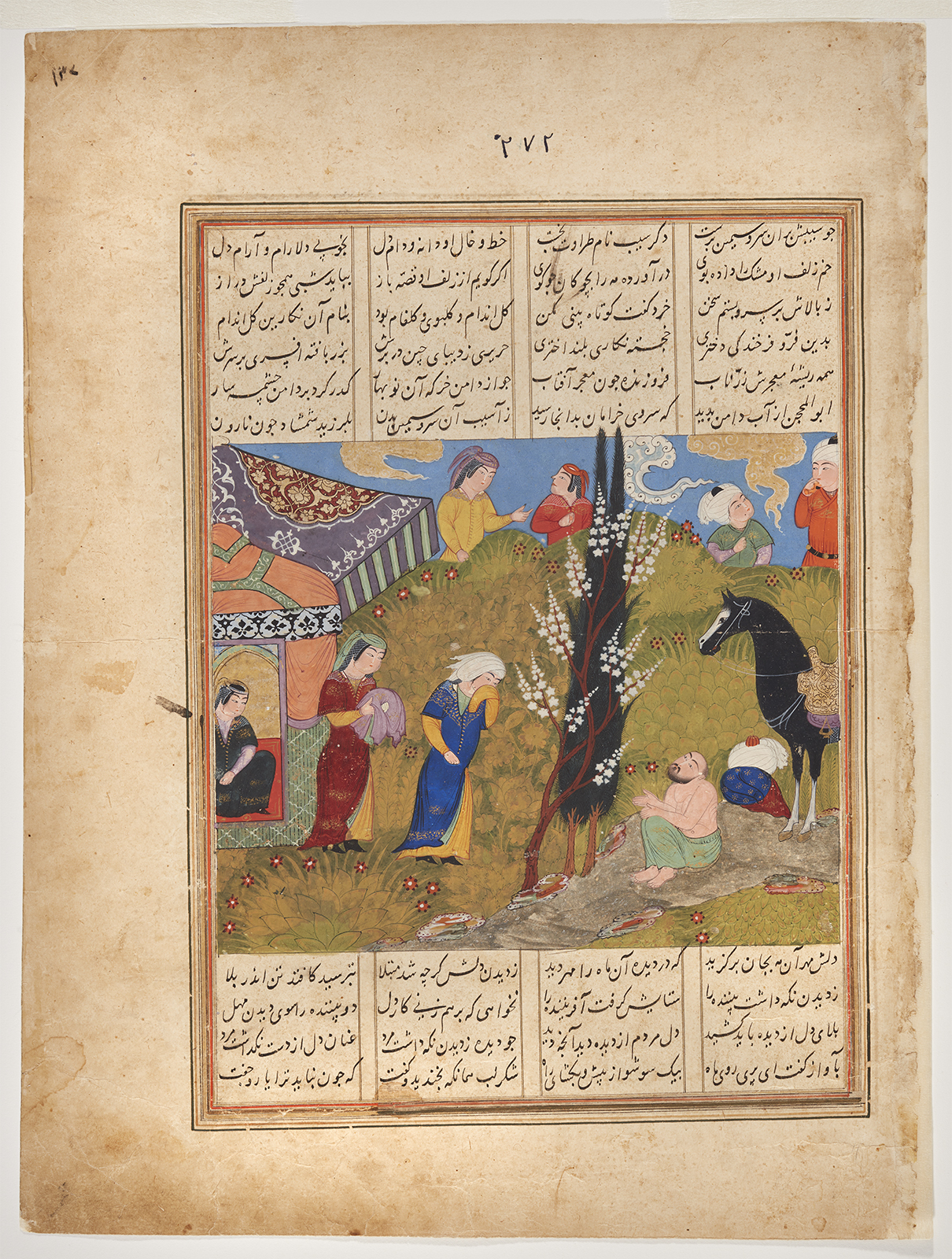 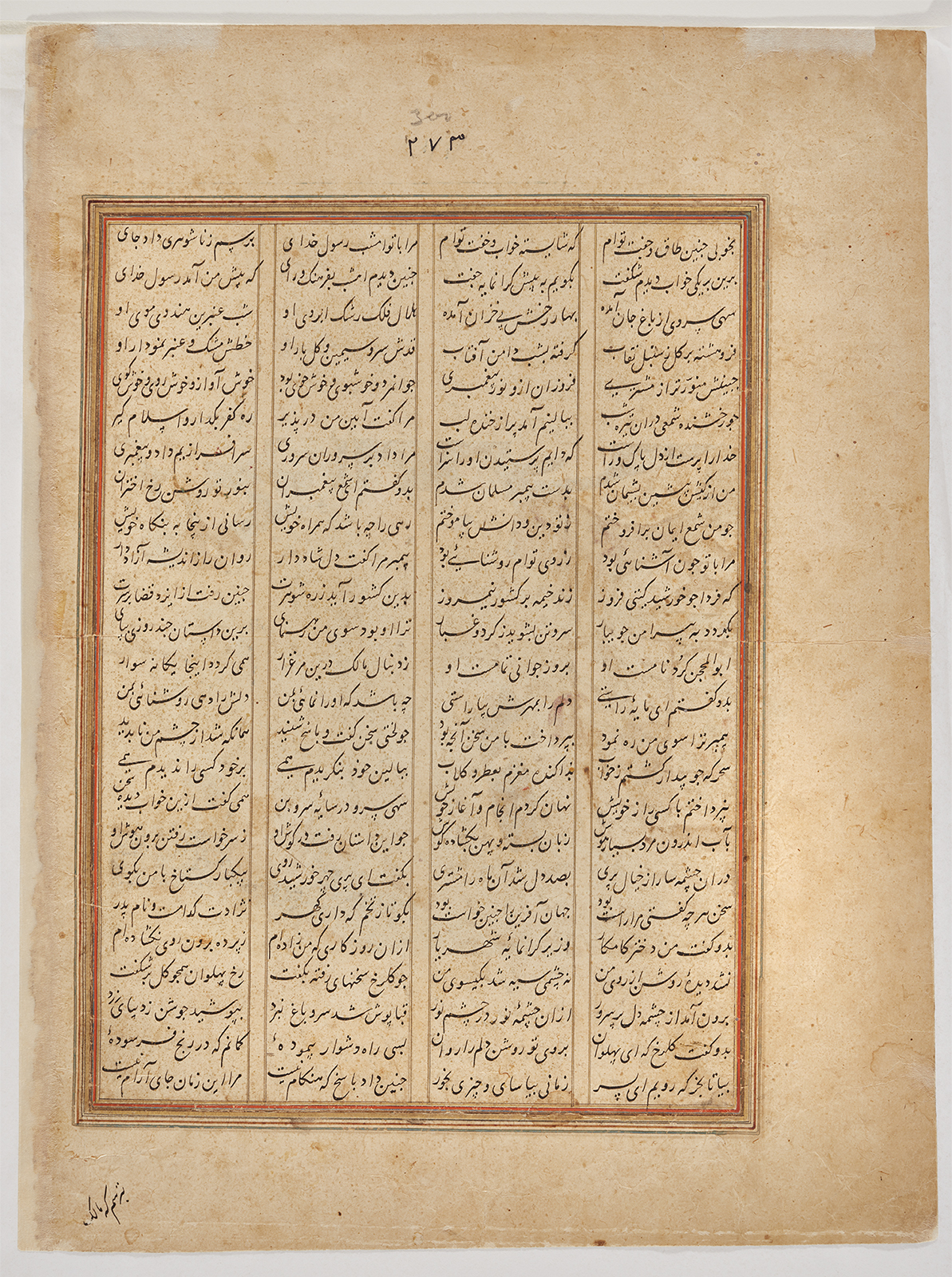 The Maiden Gulandam and an Ardent Admirer

An important figure in Shi‘i Islam, ‘Ali is portrayed in the Khavaranama as a hero who possesses supernatural powers to defeat demons, dragons, and enemy kings.[4] Followed by his loyal companions, such as Abu’l Mihjan, Malik Ashtar, Amr ibn Umayya, and others, ‘Ali endeavours to defeat the idolatrous kings in the East (the Khavaran) in order to ensure the spread of Islam. Through these distinct episodes, the Khavaranama narrates the victory of good over evil.

The Maiden Gulandam and an Ardent Admirer depicts Abu’l Mihjan’s desperate entreaties for Gulandam’s favours. Having found the encampment of the three beauties, Gulandam, Gulbuy, and Gulnam, Abu’l Mihjan decides to undergo the physical discomfort of seating himself in a cold stream in order for Gulandam to cast her eyes towards him. Semi-clothed, Abu’l Mihan gazes upon Gulandam while perched in a cold stream of water, his horse and belongings forgotten. Gulandam looks upon her admirer while lifting her yellow sleeve in surprise, obscuring her nose and mouth.[5] Following close behind, Gulandam’s companion rushes to Abu’l Mihjan’s aid, carrying an additional robe. A third figure watches from the safety of an embroidered tent, while an onlooker in the background bites his finger in astonishment at the spectacle before him. Verse lines, organized in four columns, frame the image at the top and bottom.

Produced in Shiraz, the scenes in this manuscript are executed in a style characteristic of painting production in the region in the 15th and 16th centuries. This style can be seen in the use of bright colours, such as yellows, reds, and blue, as well as in the clear division of space between the principal scene and the horizon in the background. Abu’l Mihjan’s bulbous white turban, as well as the women’s headdresses, are also distinctive elements of the Shiraz school of painting in this period. [6]

While the manuscript previously consisted of 155 drawings, these were dispersed in various institutions. The majority remain at the Gulistan Palace Museum in Tehran, while other folios can be found at the Harvard Art Museums in Cambridge, Massachusetts and the Metropolitan Museum of Art in New York.[7]