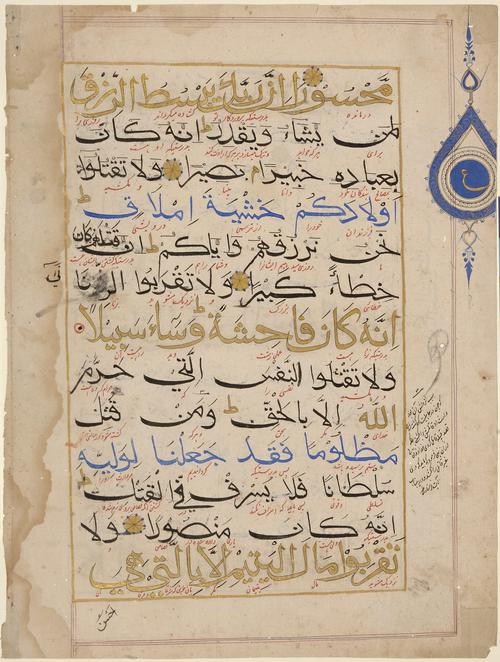 This folio belongs to one of a very few Qur’an manuscripts that survive from the period between Timur’s invasion of northern India in 1398-99 CE and the advent of the Mughal dynasty in 1526 CE. It has been a challenge to understand the general development of the art of the book in this region during the fifteenth century due to the diversity of artistic styles corresponding to the cultural centres of independent Muslim sultanates. Manuscript production seemed to follow the Timurid tradition in Iran and Central Asia, with one distinguishing feature: the use of the bihari script, as shown here. A strange mutation of naskh script with obscure origins, bihari appears only in manuscripts predating the Mughals (James 1992b, p. 102). It is characterized by an exaggeration of the sublinear letter forms through a thickening of the letter’s curves and a sharpening of its end points. On the present page, thirteen lines have been calligraphed in gold, black and a characteristic milky blue, with Persian translations appearing in red nasta'liq below each line. Eight-petalled gold rosettes with blue dots separate verses, and a teardrop-shaped blue and gold medallion with finials frames a circular blue pendant inscribed with a golden letter 'ayn. This letter stands for 'asharah (ten) and marks a group of ten verses.