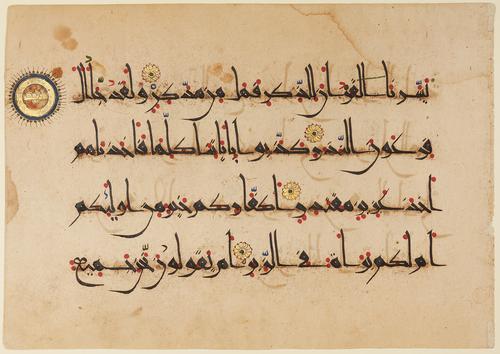 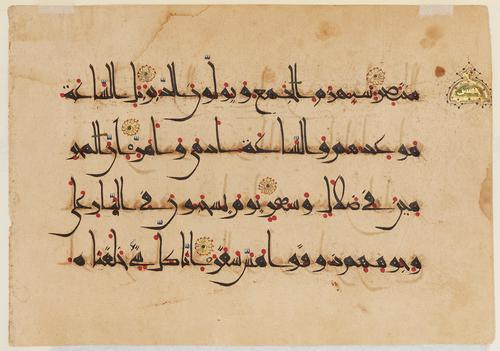 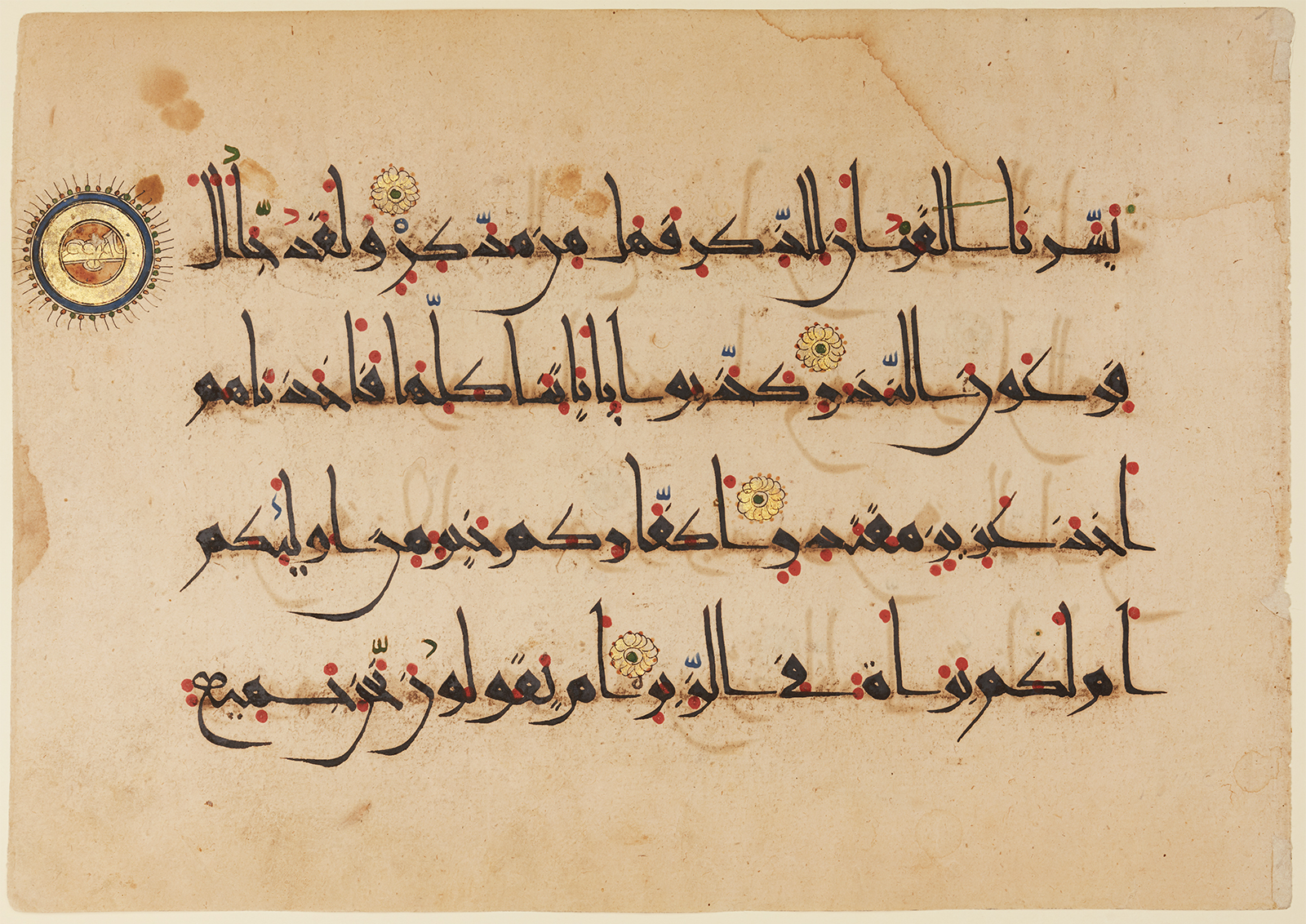 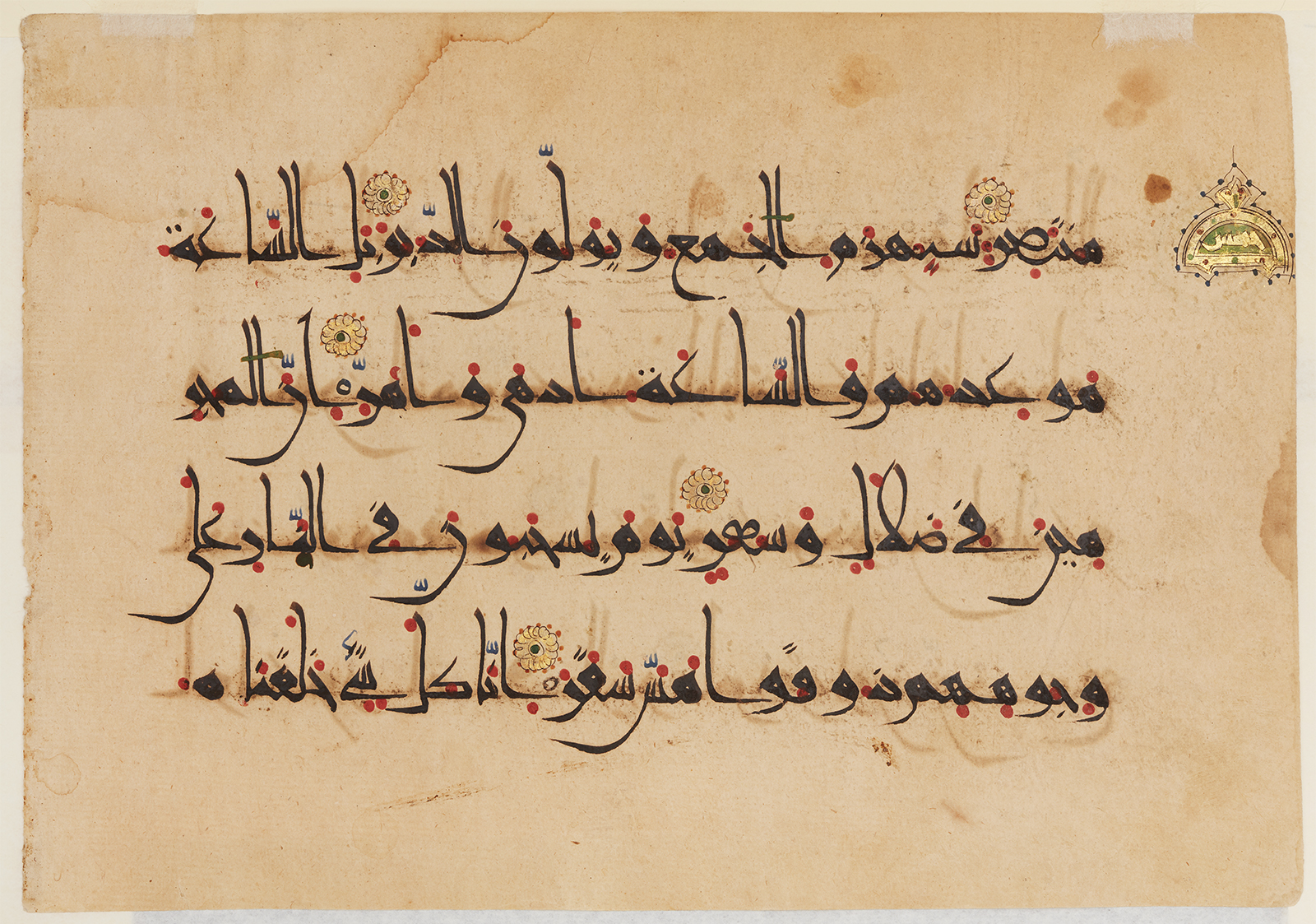 By the late 10th century, Qur’ans were largely written in a vertical format, as can be seen in a leaf within the collection of the Art Institute in Chicago.[2] The horizontal orientation of this folio in the Aga Khan Museum Collection harkens back to earlier copies of the Qur’an.[3] Rather than using the angular, kufic script of such older manuscripts, however, it uses a new calligraphic style referred to as “Eastern kufic” or “broken cursive.” Appearing in Iran during the 10th century,[4] this new style featured letters more elongated and narrow in form.[5] Its introduction was also accompanied by a shift from parchment (animal skin) to paper as a primary medium for transcribing text, particularly in regions of the Eastern Mediterranean and Iran.[6]

Surat al-Qamar alerts disbelievers to the punishments that may lie in store for them on the Day of Judgment.[7] The first verse describes a cataclysmic lunar event—the splitting of the moon in two (shaqq al-qamar)—which serves as a harbinger of the apocalypse and as a confirmation of Muhammad’s prophethood.[8]

The verses read, in part:
54:46: Surely the Hour will be the moment of their promise, and that
moment will be calamitous and distressing

The verses that follow this opening describe events during which other, earlier communities, such as the people of Noah, or the Pharaoh, ignored God’s warnings. Their behaviour is admonished by the repeated line, “Easy we have made the Qur’an to understand; so is there anyone who will be warned?” [10]

The cleaving of the moon is understood to have been a public event, witnessed not only by Muhammad’s community in Mecca but also by the whole world, thus operating as an irrefutable sign of Muhammad’s appointment as prophet.[11] The moon was also the emblem of the Prophet Muhammad’s tribe, the Quraish. Therefore, the portentous cleaving of the moon may have also served as a metaphor for the division that occurred within the Quraish tribe after the advent of Islam: some members converted, while others remained pagan.[12]

“Broken” or “Eastern kufic” continued to be used as a calligraphic style until the 11th century, and calligraphers who worked in the Eastern kufic style produced Qur’ans for a wide variety of purposes, including secular patrons. In contrast, calligraphers copying Qur’ans in the earlier, kufic style, such as a Qur’an palm leaf in the Aga Khan Museum Collection (AKM480), would have been produced exclusively by religious scholars.[13] The owner and origins of the late 10th-century folio—and, by extension, the Qur’an copy from which it comes—remain unknown.