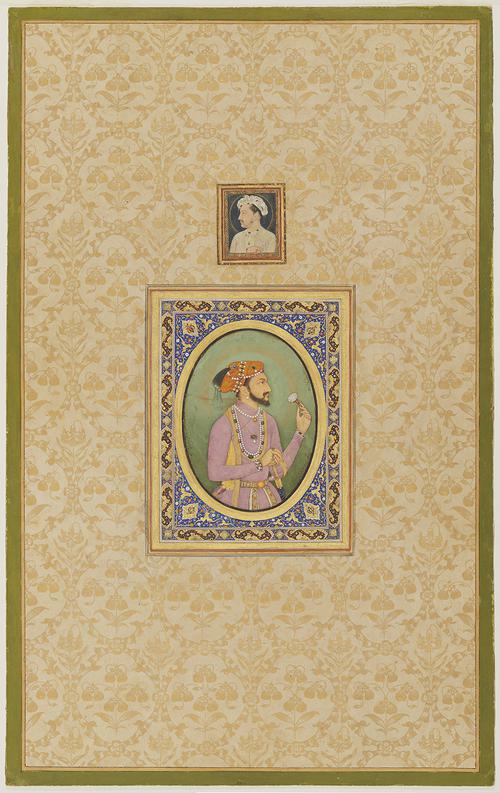 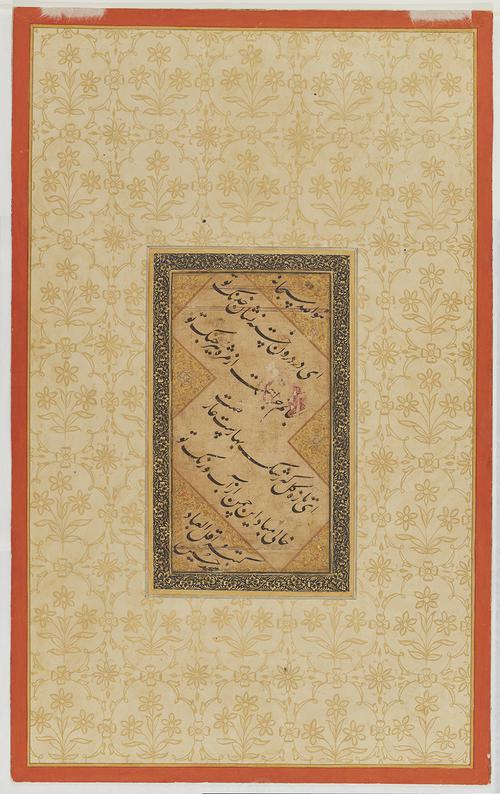 AKM135, Portraits of Jahangir and Shah Jahan, Back 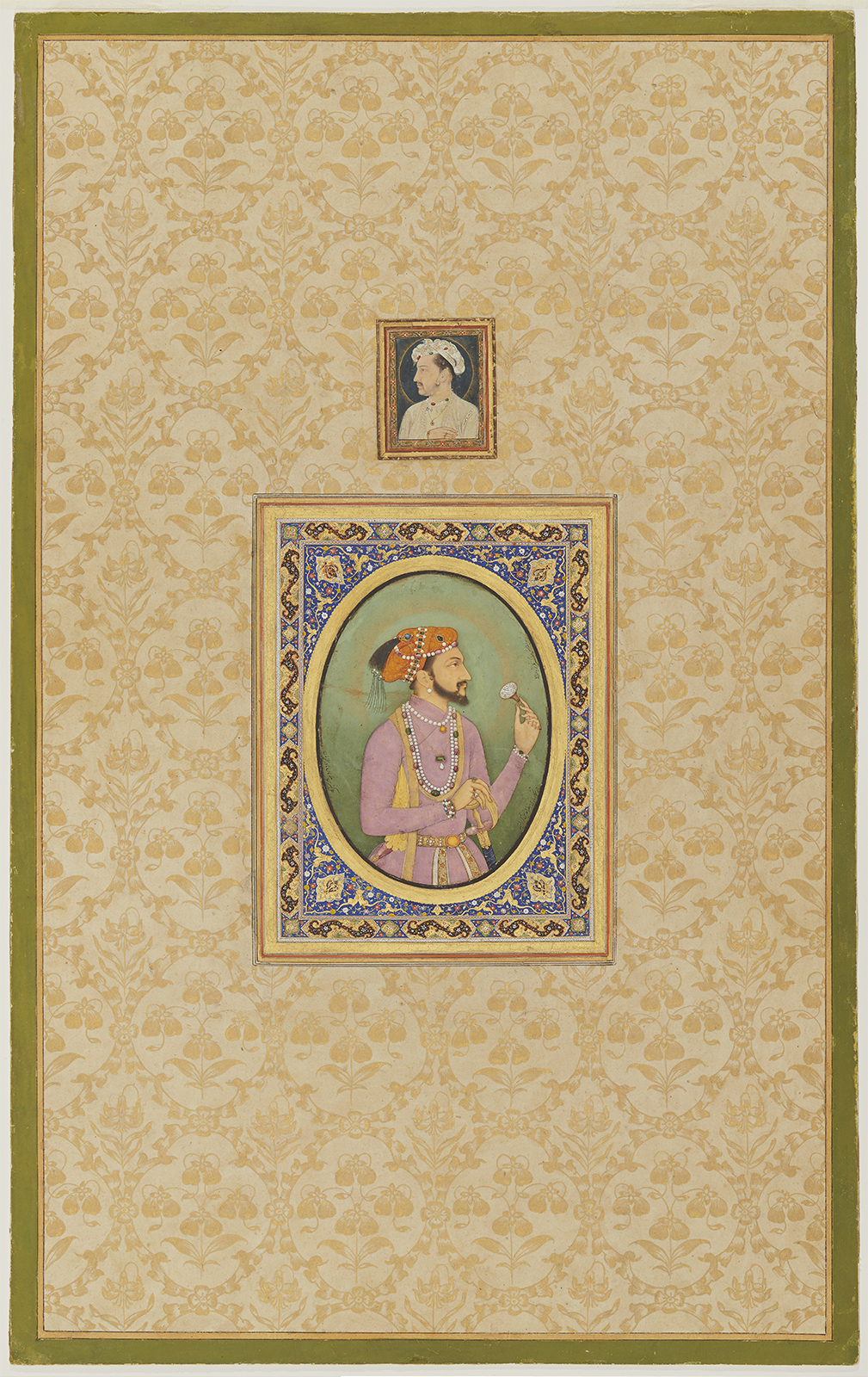 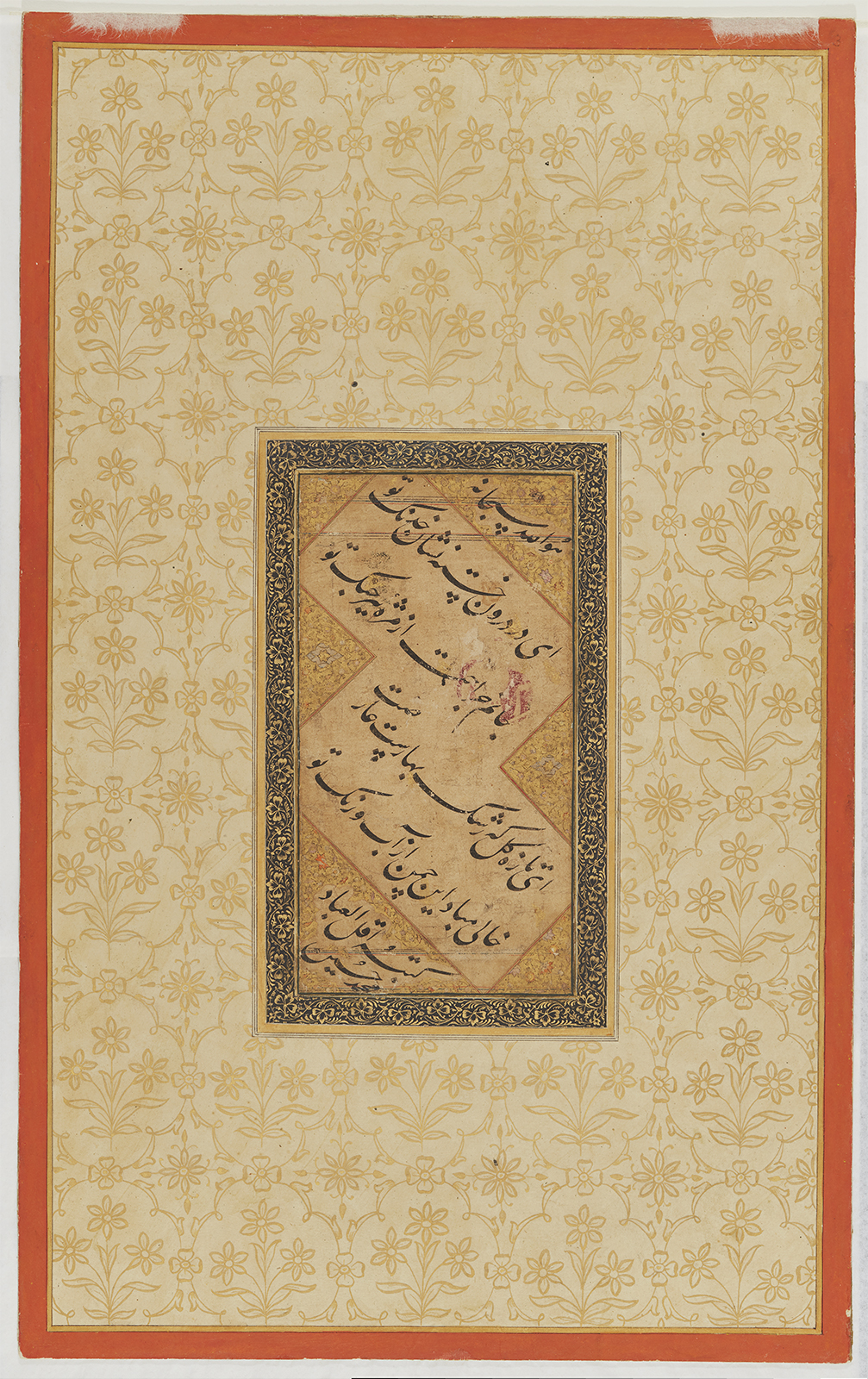 Portraits of Jahangir and Shah Jahan

This album painting shows portraits of two Mughal emperors; the upper portrait shows Jahangir (r. 1605–27) in a jharoka window-scene, while the lower, larger portrait depicts his son, Shah Jahan (r. 1627–58) in greater dimensions, a golden nimbus or halo encircling his head. Most famous today for commissioning the Taj Mahal, Shah Jahan was also a connoisseur of gemstones. In this portrait, he is richly adorned with necklaces, bracelets, and pendants of pearls, emeralds, rubies, and other jewels. He wears an orange turban decorated with strings of pearls, rubies, and emeralds and a sapphire turban-ornament (sarpech) of black aigrette feathers. His gold belt glitters with diamonds and a large opal. In his sash is tucked a dagger or katar, and his right arm leans on a sword. He is holding his imperial seal on his left hand, a sign of his sovereignty.

Both portraits bear inscriptions. In the portrait of Jahangir, the emperor’s resting right hand leads the eye to an inscription on his left shoulder: “rasm Balchand,” which refers to the portrait’s artist, Balchand, a Hindu painter of the Mughal court. In this portrait, Balchand follows the naturalistic approach of Mughal painting, rendering such details as the emperor’s double chin, his eyes, and even the fine folds of his shirt.

The portrait of Shah Jahan, by contrast, is a public and official statement emphasizing the emperor’s authority. Three inscriptions around the border of the oval painting contain the date of execution and the signature of the famous painter of the Mughal court, Abu’l Hasan, with his honorary title “Nadir al-zaman, Wonder of the Age.” The inscription on the imperial seal that Shah Jahan is holding contains his imperial titles, “Abu’l Muzaffar Muhammad Shihab al-Din Shah Jahan padishah Ghazi, Second Lord of the auspicious astral conjunction, year one of the Shah Jahan’s reign.” The imperial title “Lord of the Auspicious Conjunction” can be traced back to the conqueror Timur (Tamerlane). Shah Jahan therefore underlines his Timurid and Central Asian lineage while naming himself as second Lord of the auspicious Conjunction to affirm his legitimacy.