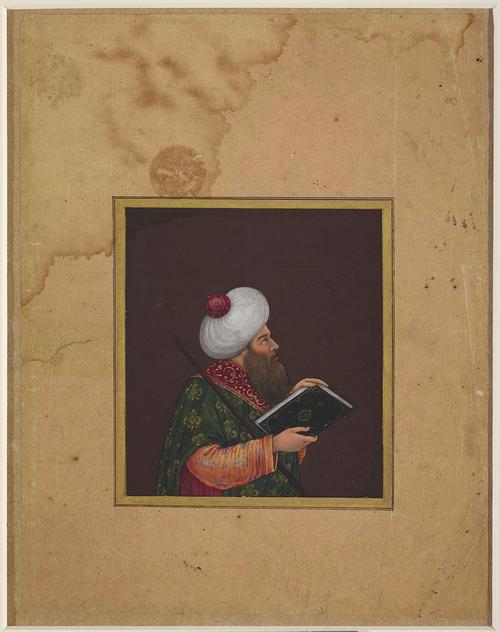 AKM733, Portrait of an Ottoman Dignitary 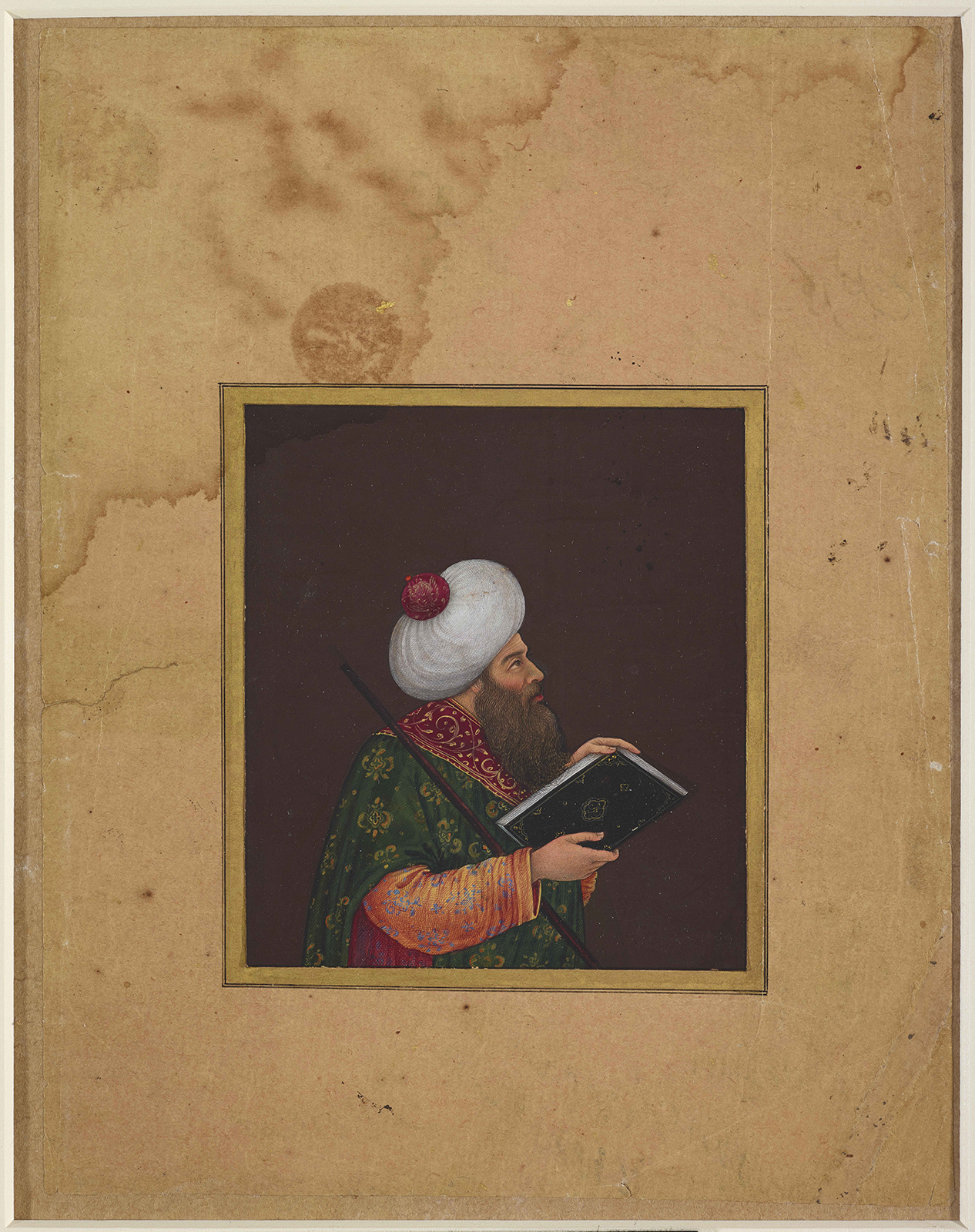 Portrait of an Ottoman Dignitary

This portrait was likely based on a European engraving. Persuasive evidence of this influence can be found in the modelling of face and figure. Turned to the right, his eyes looking upward from a book and staff, the bearded man resembles a Christian saint or apostle. More specifically, his portrait seems to embody two styles of Italian portraiture: the Venetian, which commonly depicted upper-class citizens in three-quarter view against a blue background; and the Florentine, which followed the Roman tradition of depicting subjects with distant gazes, often dressed in antic costumes.

From the late 16th century to the first half of the 17th century, an astounding range of aesthetic traditions and styles circulated in Mughal India.[2] Largely due to the activities of trade merchants and missionaries, European paintings and prints intermingled with artworks executed by Iranian émigré artists at the Mughal court and others using Hindu themes. Interestingly, a rise in European influence upon on Mughal Indian art coincided with the arrival of the third Jesuit Mission in 1595. Portuguese chroniclers noted the presentation of European images to Mughal rulers and princes, knowing such gifts would be greatly appreciated.[3]

Other Mughal portraits of Ottoman subjects include two depicting Ottoman dignitaries at the Mughal court. Both dated to the mid-17th century,[4] one follows a rather Italianate style, and the other a Mughal Indian style. A portrait of an Ottoman ambassador in the David Collection captures the subject wearing a fusion of Mughal and Ottoman fashions, complete with turban, fur-trimmed caftan, and pouch.[5] Not least, the Minto Album, Fol.49A contains a portrait of a man identified as Ottoman below a depiction of Jahangir.[6] It is ascribed to the otherwise unknown artist Ami Chand and dated 1615–20,[7] not long after the completion of this portrait in the Aga Khan Museum Collection.

3. Ibid., 115. Including German, Dutch, and Italian paintings and drawings and prints as well.

4. Suraiya Faroqhi, The Ottoman and Mughal Empires: Social History in the Early Modern World, 65; and A Cultural History of the Ottomans: The Imperial Elite and its Artefacts, 72–73. Portrait of a Turkish Ambassador at the Court of Shah Jahan, 1651–54. David Collection, Copenhagen, Inv. No. 49/1992. Since these publications, more paintings with Ottoman representation continue to be identified.

5. The fashion of his caftan reflects the style of Sultan Mehmed IV (r. 1648–87), while his turban is more of an imaginative representation.

6. This portrait of Jahangir is ascribed to Hashim.

7. Susan Stronge suggests that the subject may been loosely copied from a European painting of a 16th-century Turkish ruler, but the features of the man are rendered in a completely Mughal fashion. The names of artists are written on the white architectural frame of the painting, to the left of the images. See Elaine Wright, Muraqqa, Imperial Mughal Albums from the Chester Beatty Library, 340, no.49.

Chida-Razvi, Mehreen. “A Sultan before the Padshah? Questioning the Identification of the  Turbaned Figure in Jahangir Preferring a Sufi Shaykh to Kings.” Art, Trade and Culture in  the Near East and India: From the Fatimids to the Mughals. Studies Presented to Doris  Behrens-Abouseif, eds. Alison Ohta, JM Rogers, and Rosalind Wade Haddon. London:  Gingko Library, 2016, 204–15. ISBN:  9781909942905

Martin, FR. The Miniature Painting and Painters of Persia, India and Turkey, London: B.  Quaritch, 1912.