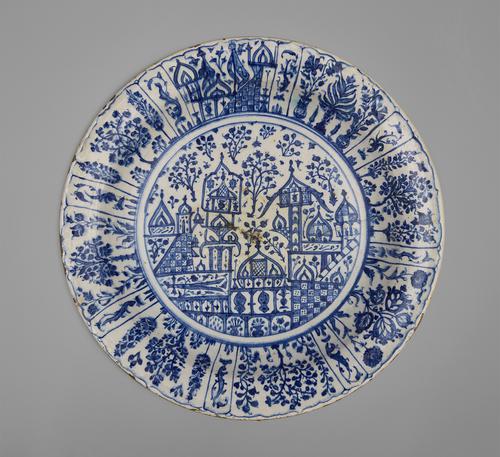 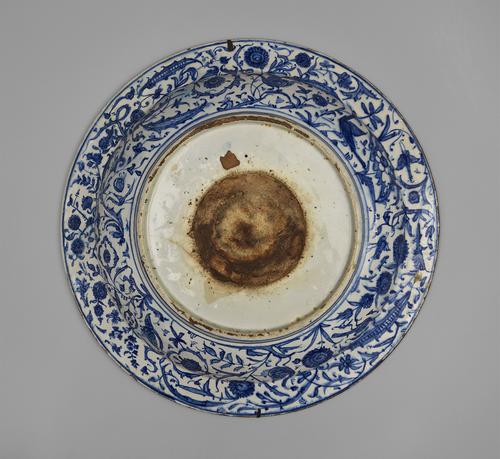 AKM589, Plate with architectural decoration, Back 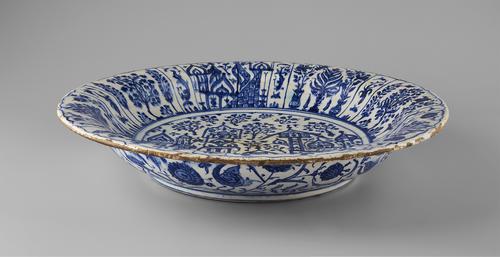 AKM589, Plate with architectural decoration, Side 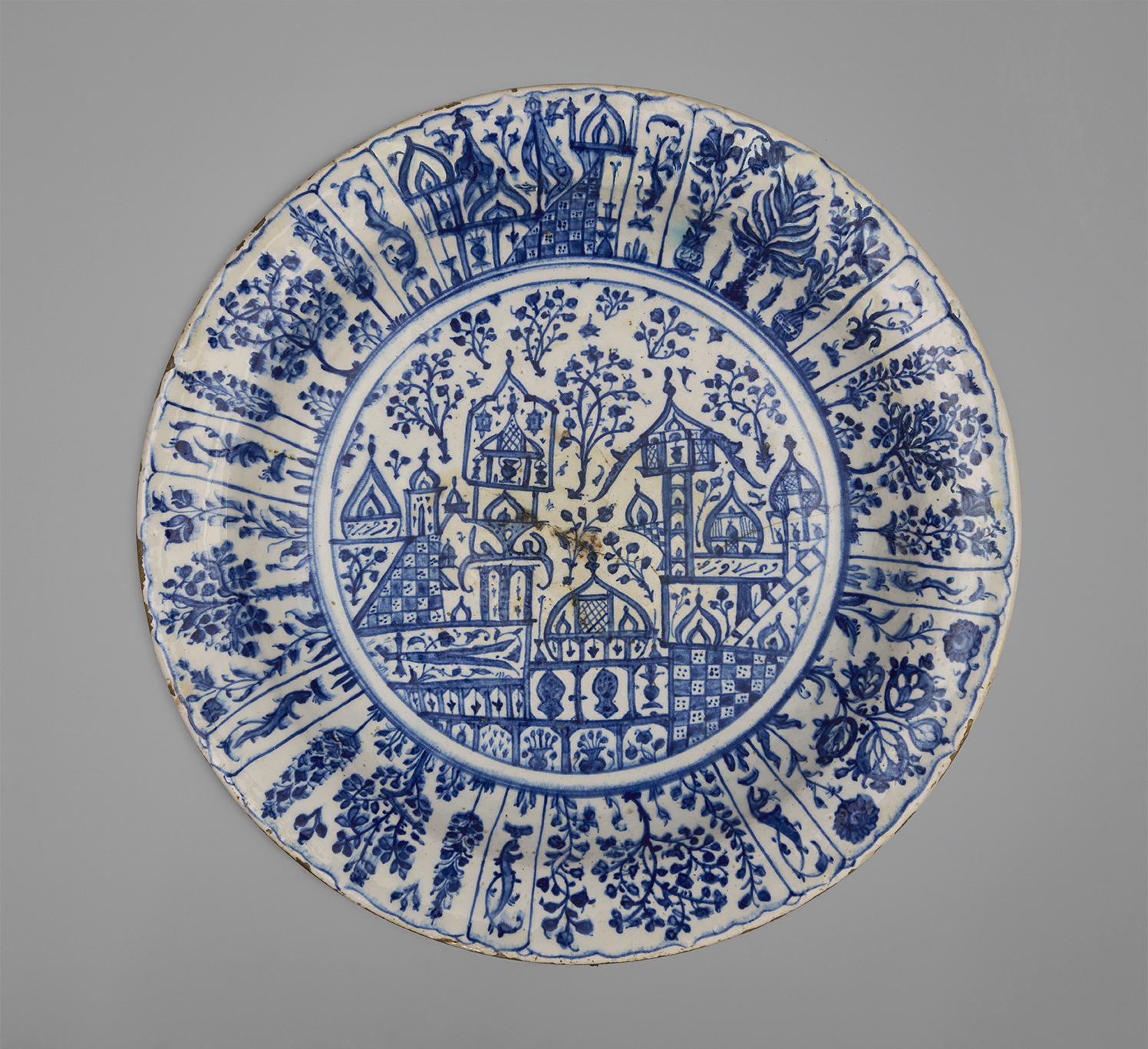 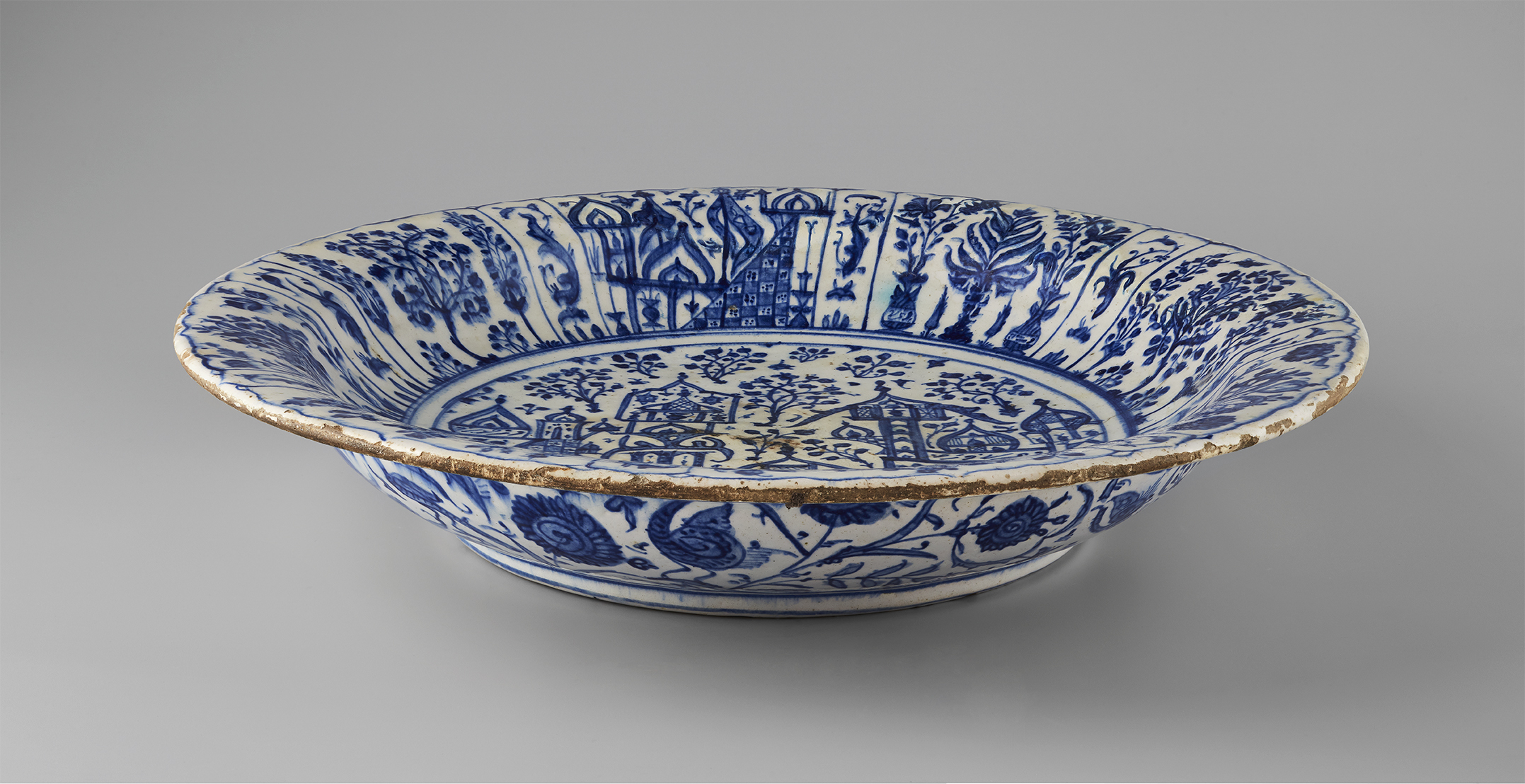 This pictorial pottery dish includes a central medallion depicting a number of buildings. Several structures are surmounted by bulbous domes and one displays long eaves. At least two minbars (pulpits) appear represented in the central medallion; a third minbar, flanked by two banners, marks the centre of the rim above. Two indecipherable Arabic inscriptions also are inserted into the central architectural decoration; these may be written in Arabic, Persian, or Ottoman Turkish. If Persian, it is not impossible that the inscriptions read: “All my secrets are from You [God] and all things [are] above me [the believer”] (va hameh raz-i man ze tu va hameh chiz bar man). Alternatively, the inscriptions may include the terms ‘arsh and zamzam; that is, God’s throne and the sacred well in Mecca, respectively.

In the central composition, arcades include representations of the Prophet Muhammad’s two sandals (na‘layn) and his double-edged sword Dhu’l-Fiqar, which was passed down to his son-in-law ‘Ali. Muhammad’s sandals, which counted among his prophetic relics, were associated with the Ashrafiyya madrasa in Damascus. Fulfilling both devotional and talismanic purposes, they were frequently represented in Ottoman paintings and ceramics as well as in architectural tile revetments. This and other tiles displaying architectural scenes (such as Mecca) and Muhammad’s sandalprints strongly suggest that the dish was produced in Ottoman Syria.

While Dhu’l-Fiqar is associated with ‘Ali and thus widely depicted in Iranian Shi‘i art, it also is a hallmark of Alevism (a branch of Shi‘i Islam that arose in 10th-century Anatolia) and Bektashism (an order closely aligned with Sufism that was originally practised in Anatolia and the Balkans). Moreover, the sword is commonly depicted in Ottoman arts, including war and ceremonial banners, in which it was used as an amuletic device thought to secure success against enemies and protection against a range of evil forces.

Taken together, the sandalprints and Dhu’l-Fiqar as represented on this dish may have functioned as stand-ins for Muhammad and ‘Ali. Besides their devotional and talismanic potential, these two motifs also may have served as geographical markers: for Muhammad, the location of his sandal relics in Damascus, and, for ‘Ali, his mausoleum in Najaf. It is therefore possible that this dish was specially commissioned by an individual as a souvenir of his or her visitation (ziyarat) to several Islamic sites and tombs located in Syria and Iraq. [1] That the dish includes depictions of domed structures, minbars, banners, and hanging lamps further suggests one or several religious architectural complexes. Additionally, the lavish floral scrolls and bird motifs that adorn the front and back of the dish suggest a tailor-made, luxury manufacture.

The dish’s place of production remains uncertain. On the one hand, it appears related to Chinese-inspired blue-and-white ceramics, referred to as “Kraak” wares, [2] which were made in Iran, particularly during the 17th century. Such imitations of Chinese porcelains were popular in Iran and exported westward at this time. On the other hand, it also may have been produced in Ottoman lands after 1516, as attested by a number of blue-and-white tiles depicting architectural and floral landscapes, today held in the Museum of Islamic Art in Cairo.

Notes
[1] This is not the only plate or dish that may have fulfilled a commemorative role: another large-scale enamel-painted plate made during the 13th century likewise appears to have been made as a triumphal object in memory of a battle. See Renata Holod, “Event and Memory: The Freer Gallery’s Siege Scene Plate,” Ars Orientalis 42 (2012): 194–219.
[2] See Yolande Crowe, “Ceramics XV. The Islamic Period, 16th-19th centuries,” Encyclopaedia Iranica.