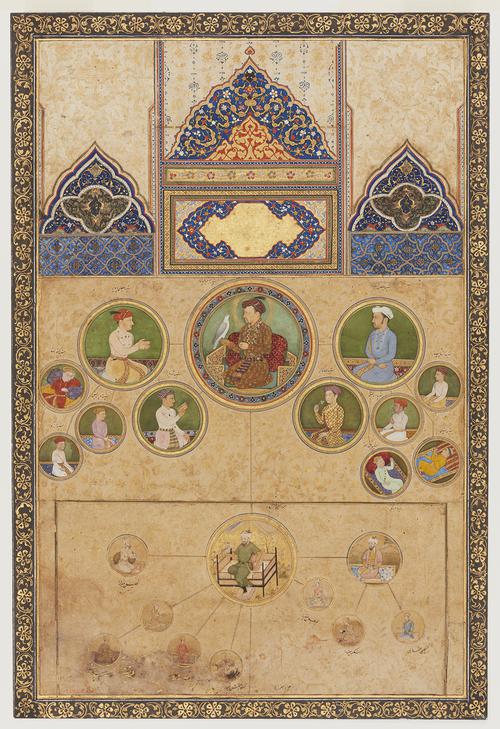 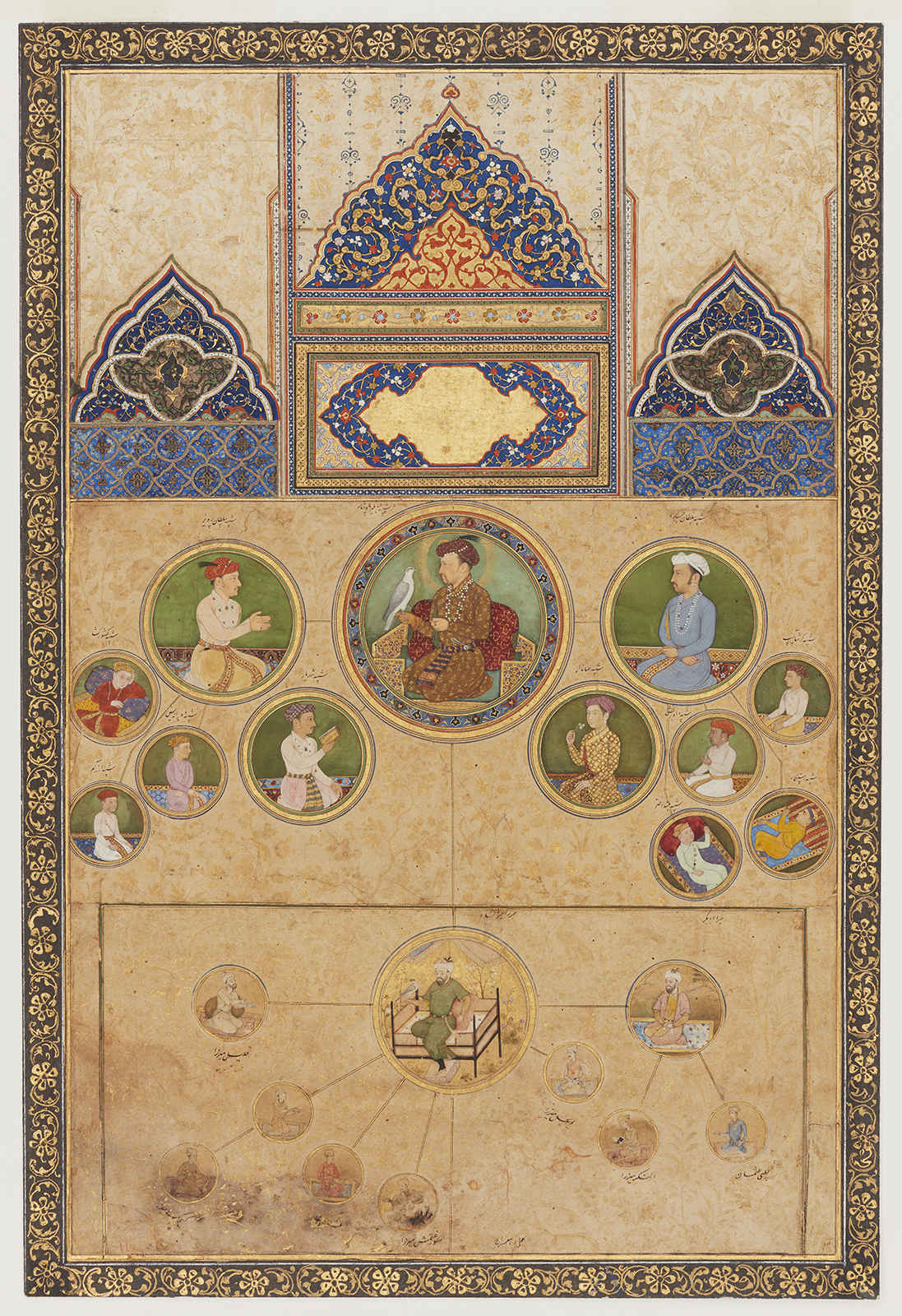 The upper part of this genealogy includes portraits of the Emperor in the centre, surrounded by four of his children and their male offspring, all identified by inscriptions (Jahangir, Parviz, Khusrau, Shahriyar, Jahandar, Azarm, Kishvar Kusha, Durandash, Garshasp, Dawar Baksh, Rastakar and Buland Akhtar). Surprisingly, Jahangir’s most famous son and successor, Prince Khurram (the future Shah Jahan), is missing from the composition. Based on the arrangement of the medallions and marks on the lower half of the paper, it appears that the portraits of Khurram and his progenies were removed from the original folio and replaced by the Mughals’ paternal ancestors, the Timurids (1370-1507).

A­­s Sunni Muslims who came from Central Asia to North India in the early sixteenth century, the Mughals cultivated their Timurid heritage and identity. Like the royal buildings of his Timurid ancestors, the palace murals of Jahangir included depictions of a large group portrait of the emperor, his extended family and retinues. In the case of Jahangir’s genealogical chart, however, the addition of Jahangir’s Timurid ancestors may have been motivated by a deeply personal and political reason: Khurram’s rebellion against his father in 1623. A gold line stretching from Jahangir’s portrait leads to the altered portion of the composition, where the prince and his sons may have been portrayed prior to 1623 and removed before 1628 when Khurram ascended the throne.

Considering Jahangir’s love of art, especially painting, it is reasonable to assume that he himself ordered the artists to erase prince Khurram and his branch from the genealogical picture. In the altered composition that we see today, a portrait of Miranshah (labelled above “Mirza Miran”) is positioned directly below Jahangir. Miranshah was a Central Asian prince and son of the famous conqueror Timur (Tamerlane), from which the Mughals traced their lineage. He had seven sons, but only six of them are visible in the lower part of the painting. The ones identified by labels are (from right to left): Aba Bakr, Ichil/Ijel Mirza, Suyurghatmish Mirza, Umar, unidentified person, and Khalil Mirza. Aba Bakr on the right is shown with his two sons, Uthman? (the inscription is unclear) and Alangir Mirza. Behind the small-size medallion with an unidentified figure on the left appears a roundel representing Miranshah’s great grandson, Muhammad Sultan “Kichik Mirza.” Therefore, the unidentified medallion could contain the image of either Sidi Ahmad, son of Miranshah and Kichik’s grandfather, or his father, Sultan Ahmad.

A second person missing from the current picture is Miranshah’s son, Sultan Muhammad. The reasons for his absence seem different from the erasure of Prince Khurram. In order to fit the Timurid genealogy into the new space on this page, one of Miranshah’s sons, Sultan Muhammad, had to be cut out of the picture. If we follow a straight black line that comes down from the portrait roundel of Miranshah, we may notice that the line gets cut off before connecting to another portrait. Therefore, it appears that the depiction of the Timurid genealogy was trimmed from its original size for purely practical reasons.

Finally, at the bottom of the page there is an inscription that reads “amal-i Dhanraj,” the work of Dhanraj. This artist is known from other paintings that he produced at the royal workshops of Akbar and Jahangir.