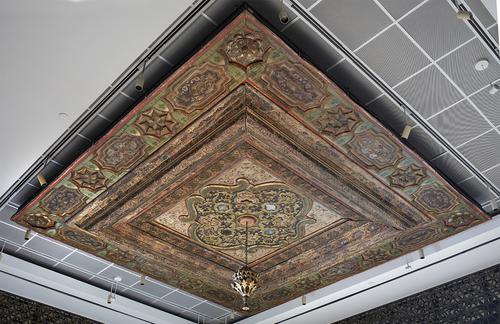 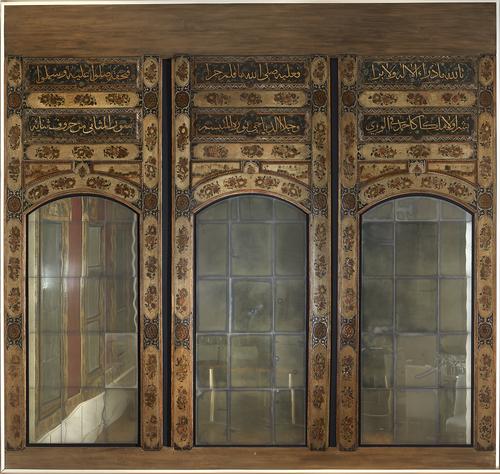 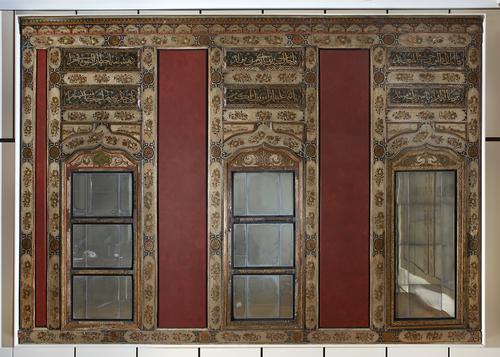 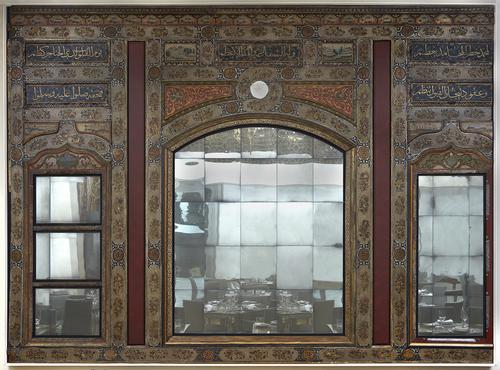 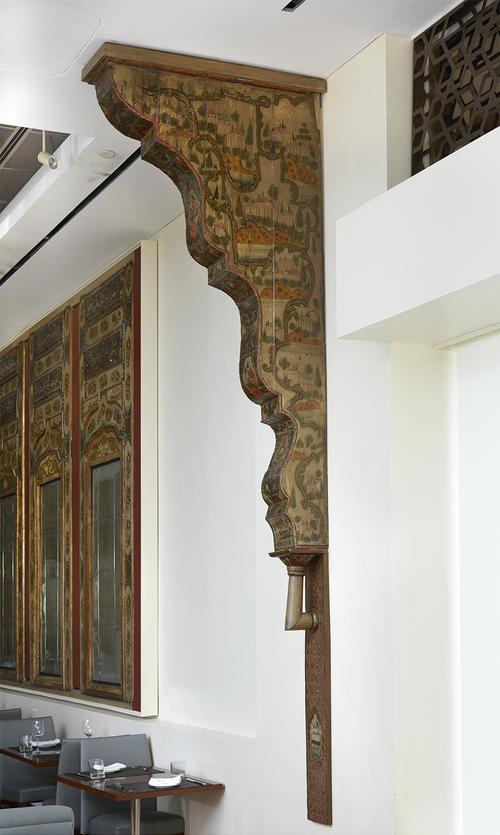 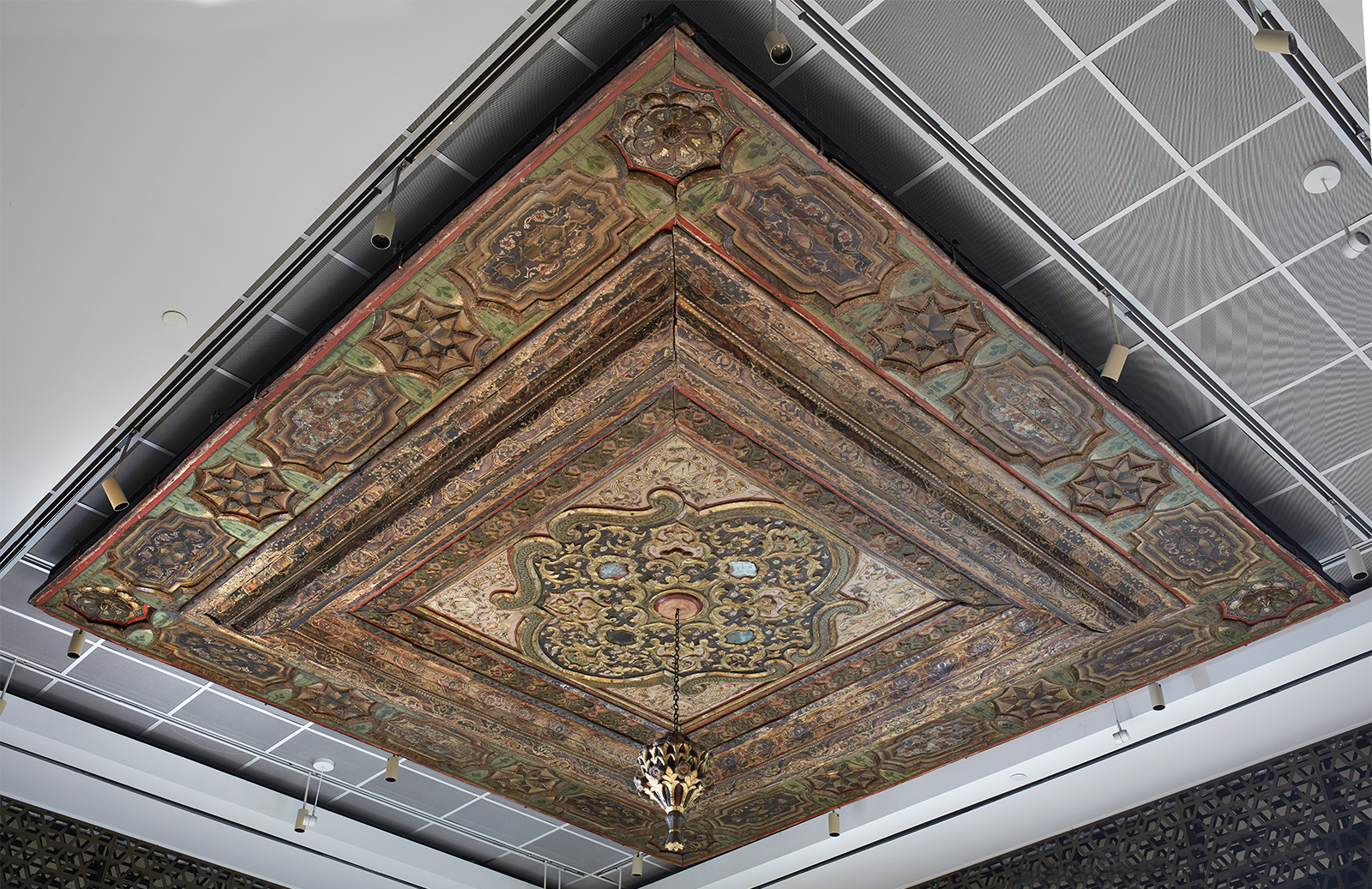 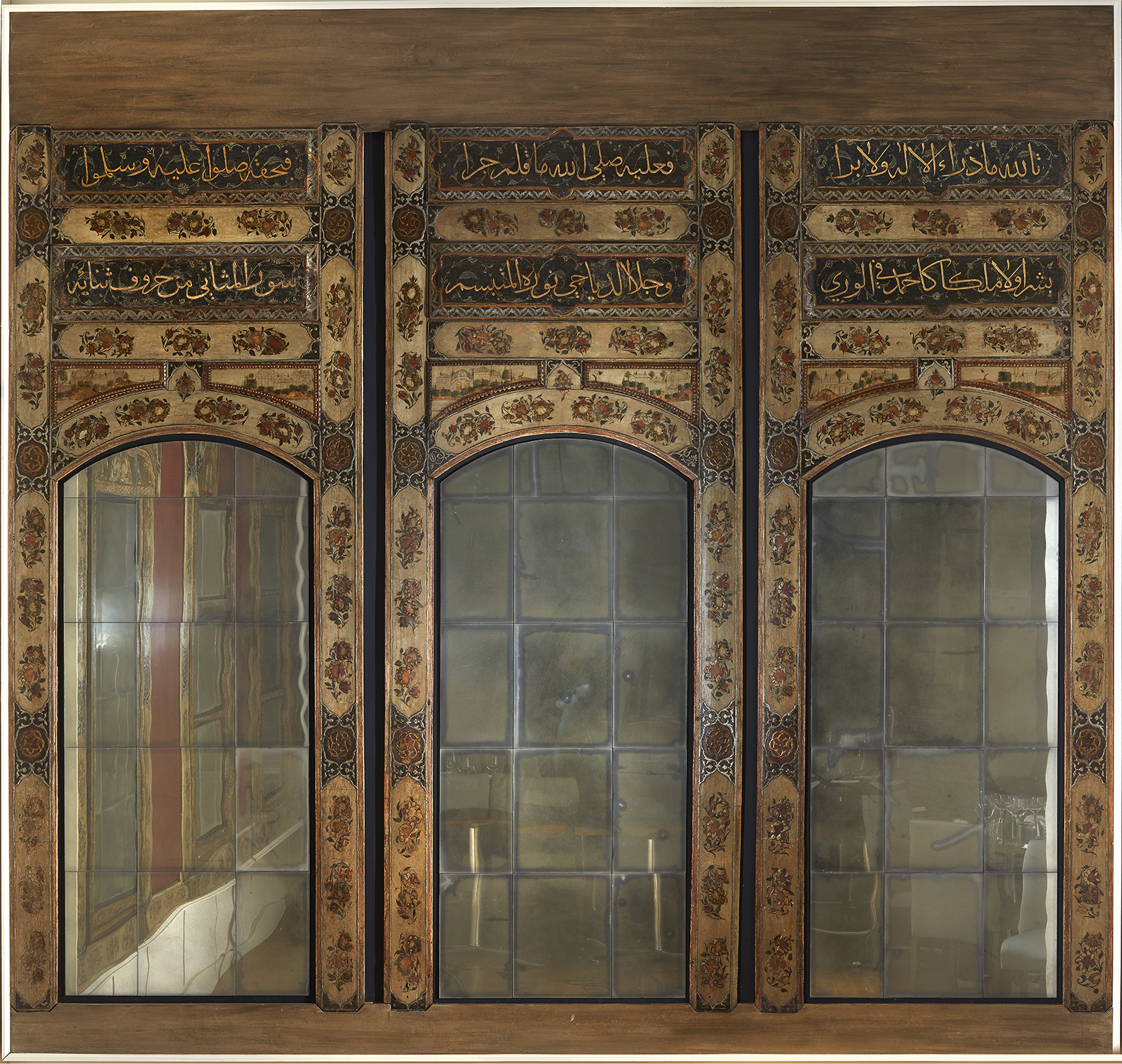 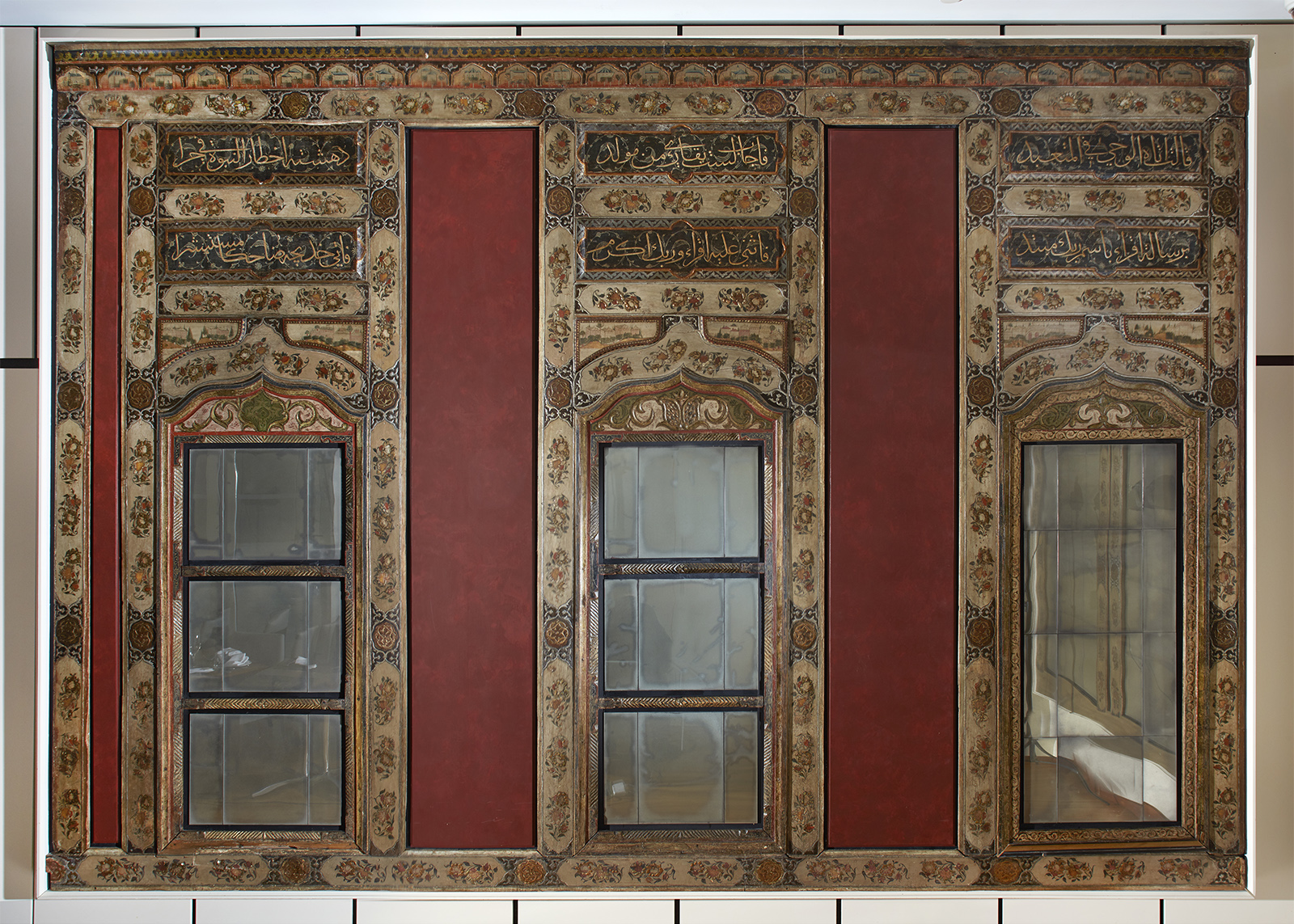 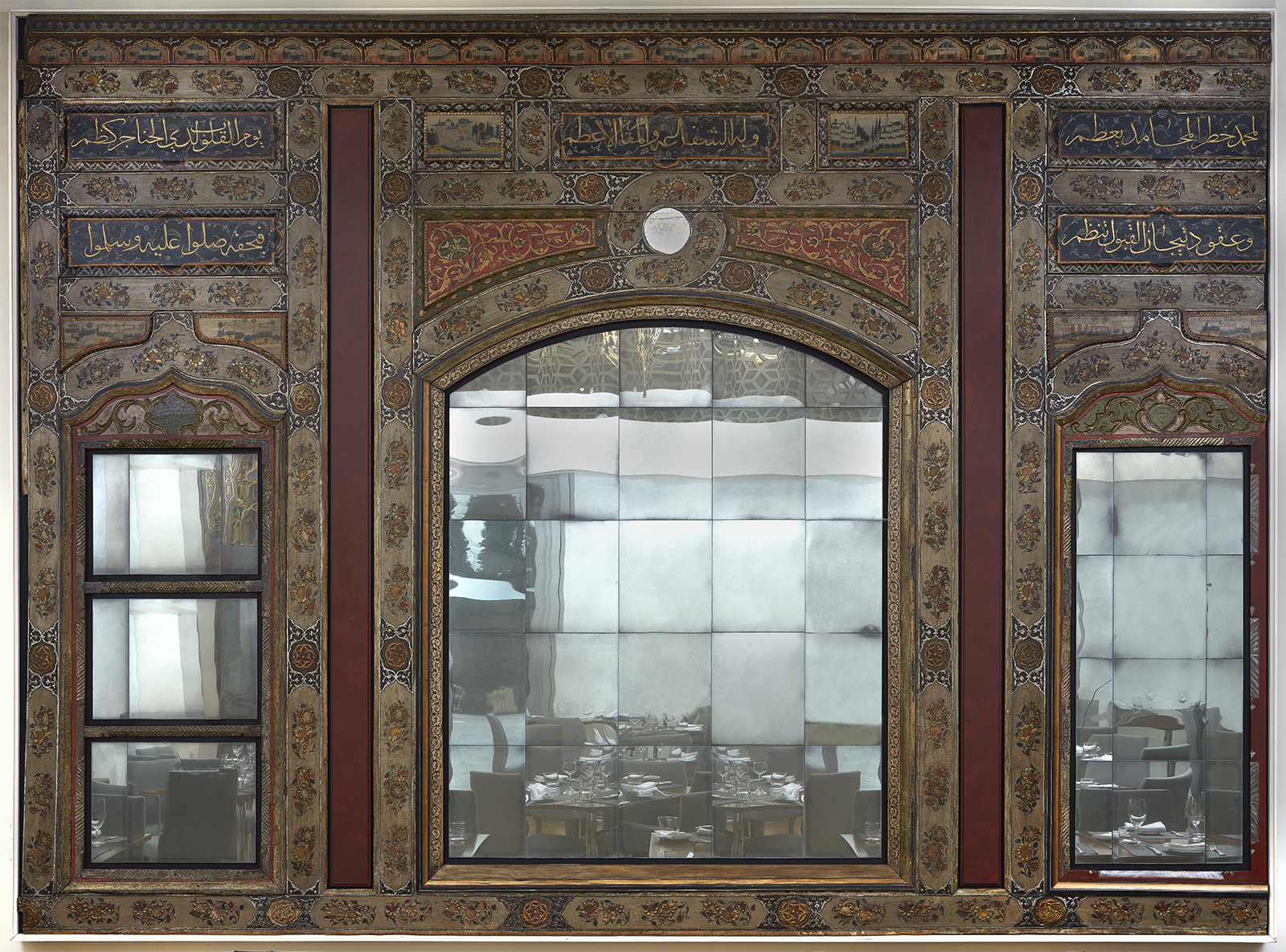 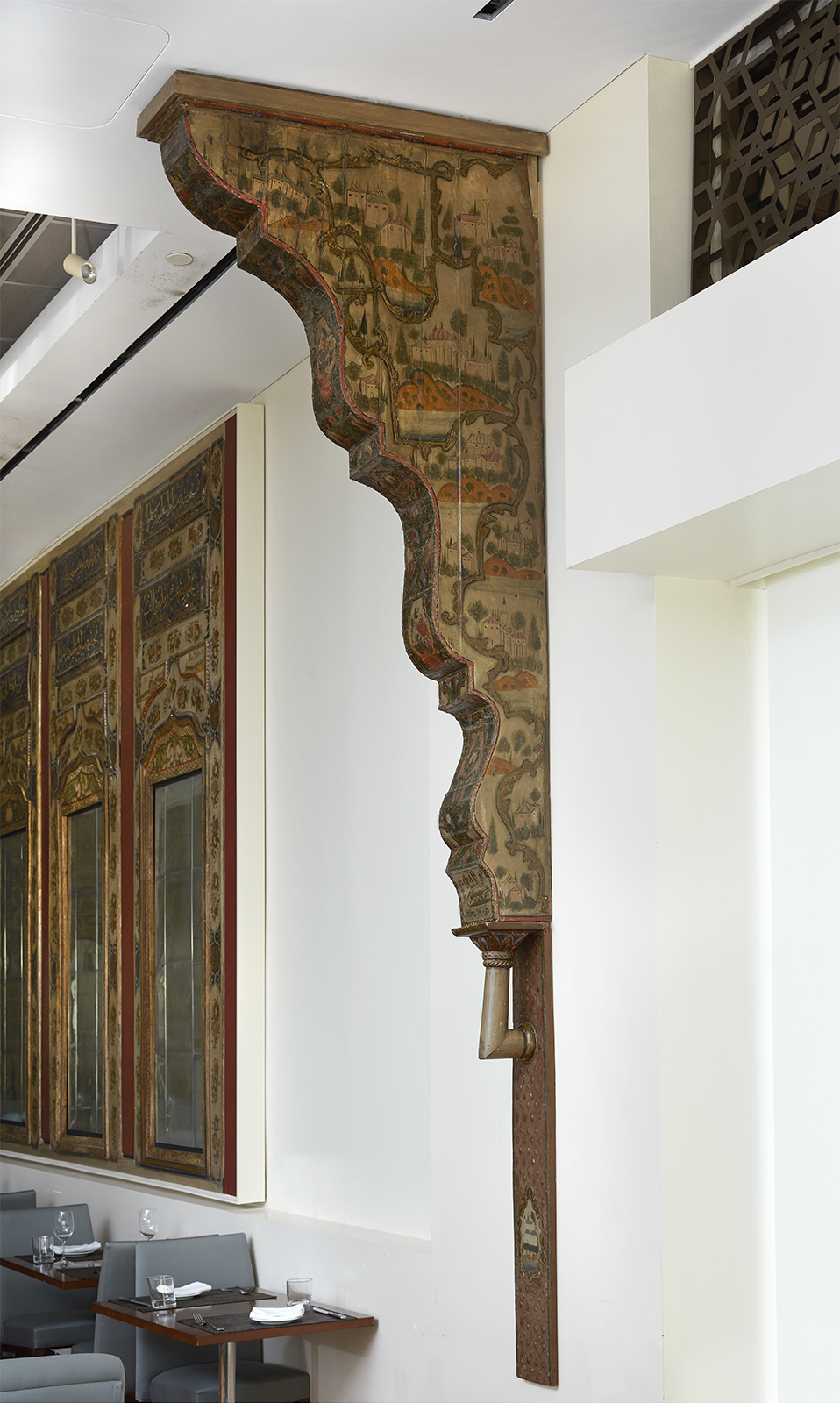 The Damascus Room in the Aga Khan Museum offers spectacular evidence of the ʿajami technique. Craftsmen applied raised ornaments to wooden boards and overlaid these ornaments with gold leaf, tin foil, and copper alloy. Next, they partially coated the boards with tinted lacquers, and finally painted them with vibrant patterns, flowers, and landscape scenes in brilliant satiny and matte pigments. Gilded letters cresting the walls of this Damascus Room enhance the luxurious effect. They also confirm the room’s date of completion: unconventionally written in words rather than numbers, the date 1214 (1799–1800) can be found within the last verse of a poem by late 14th-century Yemenite Sufi poet ‘Abd al-Rahim al-Bur‘i. Comprising 25 verses in total, the poetry inscribed around the room’s perimeter conveys praise for the prophet Mohammed.

The style of decoration and the richness of the raised ornaments indicate that the interior of this Damascus Room was built for one of the wealthiest and most influential Damascene families around the turn of the 19th century. The identity of this family is as yet unknown. Similar interiors survive today; an excellent example is Bayt Nizam, one of the most important historic houses built around 1800 by Aga Ali Khazina-Katibi. Another example is Bayt Said al-Quwatli, built for the extraordinarily wealthy merchant family Muradi around 1800, according to dates on eight interiors.[1]

The Damascene interiors of this time period were characterized by two main sections: a ground level entrance area, called ʿataba, and a higher sitting space raised approximately 40 centimetres above the ʿataba level called tazar. The ʿataba was often paved with multi-coloured stones in geometric patterns, while the raised tazar floor was traditionally covered with precious carpets, mattresses, and cushions. This separation between ʿataba and tazar was also evident in the ceiling, where a graceful arch traditionally divided the space. In the Damascus Room in the Aga Khan Museum Collection, the two curvy halves of this arch are lavishly decorated with painted landscapes featuring the Bosporus, a strait located in Istanbul separating two continents, Europe and Asia. Called Stambuli (after the city of Istanbul), such scenes were highly fashionable in the cities of the Ottoman provinces.

The floral ornaments of the room are in turn called ʿajami, which means “Persian” or “Non-Arabic.” Suggesting an interest in Eastern “exoticism,” this name affirms that Persian and Indian textiles were highly valued in Ottoman society. In the ceiling’s centre, gilded carvings and framed mirrors follow European baroque taste, called franca in Damascus. Such variety in the decorative motifs shows the wide range of influences and goods that flooded into Damascus at the turn of the 19th century; the city was an important hub of worldwide commerce and a major gathering point for the pilgrimage to Mecca.

In order to fulfil its functions as a living room and reception room for guests, the walls of this Damascus Room in the Aga Khan Museum Collection were furnished with built-in cabinets and niches. These were used to display valued porcelain objects, metal vessels, and books as well as to store mattresses and bedding. Some architectural elements of the original room are missing, including the wall closet doors and the panels once installed between niches and windows in the original house. Two hundred years of use and maintenance have darkened its surfaces. When originally installed, its walls and ceiling would have been shimmering with light and colour.