The Silk Road Ensemble in Concert 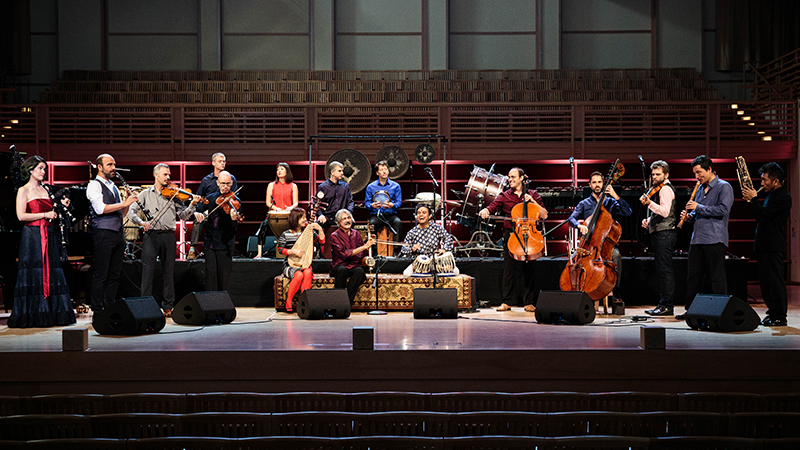 The Silk Road Ensemble in Concert

Enjoy a live concert with members of the Silk Road Ensemble! This special event features the music of:

Honolulu-born bassist Shawn Conley won a position with the Honolulu Symphony while in high school, and earned music degrees from Rice University. He won the 2009 International Society of Bassists Jazz Competition, was a semifinalist in the Thelonious Monk Jazz Competition, and has received a Wagoner Fellowship. He has performed with Sting, Peter Gabriel, and Emanuel Ax, among many others.

Christina Courtin is a multi-instrumentalist, singer, and songwriter. As a member of the neo-classical ensemble The Knights, she has been a part of six of their albums and shared a 2011 Juno award. A Juilliard graduate in violin performance, she has released two solo recordings of original genre-bending music, one self-titled on Nonesuch (2009) and the other, titled Varsity, on Hundred Pockets Records (2013).

Sandeep Das is an acclaimed tabla virtuoso. A disciple of the legendary tabla maestro Pandit Kishan Maharaj ji of the Benaras Gharana, he has built an international career collaborating with genre-crossing artists. Sandeep is founder of HUM (Harmony and Universality through Music), an ensemble promoting global understanding through performance and education. He has composed for and performed with the Silk Road Ensemble since 2000, and is a Grammy-nominated recording artist in his own right.

Mario Gotoh has distinguished herself in dual roles as a violinist and a violist. She performs a wide spectrum of musical styles, including early music on period instruments, contemporary classical music in close collaboration with composers, popular music, tango, and folk. Mario currently performs in Lin-Manuel Miranda’s Tony-, Grammy-, and Pulitzer Prize-winning hip-hop Broadway show, Hamilton.

Kayhan Kalhor is an acclaimed virtuoso on the kamancheh. A native of Iran, born in the Kurdish city of Kermanshah, he was a musical prodigy who travelled Iran to explore the music of its many regions. Kayhan is co-founder of the renowned ensembles Dastan, Ghazal: Persian & Indian Improvisations, and Masters of Persian Music. His compositions are prominent in the Silk Road Ensemble’s repertoire, and his recordings have received four Grammy Award nominations.

Cellist Karen Ouzounian is a founding member of the Aizuri Quartet, Caramoor Center for Music and the Arts, and the Barnes Foundation in Philadelphia. Her commitment to adventurous repertoire and the collaborative process has led to her membership in the Grammy-nominated, self-conducted chamber orchestra A Far Cry, and the critically-acclaimed new music collective counter)induction. Born to Armenian parents in Toronto, Karen was a prizewinner at the 2012 Canada Council for the Arts Musical Instrument Bank Competition.

Percussionist, composer, and arranger Shane Shanahan has combined his studies of drumming traditions from around the world with his background in jazz, rock, and Western art music to create a unique, sought-after style. In addition to being an original member of the Silk Road Ensemble, he has performed with Bobby McFerrin, James Taylor, Aretha Franklin, Philip Glass, Alison Krauss, Chaka Khan, and Deep Purple, among others, and has appeared multiple times at the White House. He serves as one of Silkroad’s Learning Advisors, helping design and implement residencies, workshops, and education programs.

Silkroad and the Silk Road Ensemble
Inspired by the exchange of ideas and traditions along the historical Silk Road, cellist Yo-Yo Ma established Silkroad in 1998 to explore how the arts can advance global understanding. Silkroad works to connect the world through the arts, presenting musical performances and learning programs, and fostering radical cultural collaboration around the world. Since 2000, the musicians of the Grammy Award-winning Silk Road Ensemble have been central to Silkroad’s mission. Under the artistic direction of Yo-Yo Ma and representing a global array of cultures, the Ensemble creates new forms of cultural exchange through performances, workshops, and residencies.