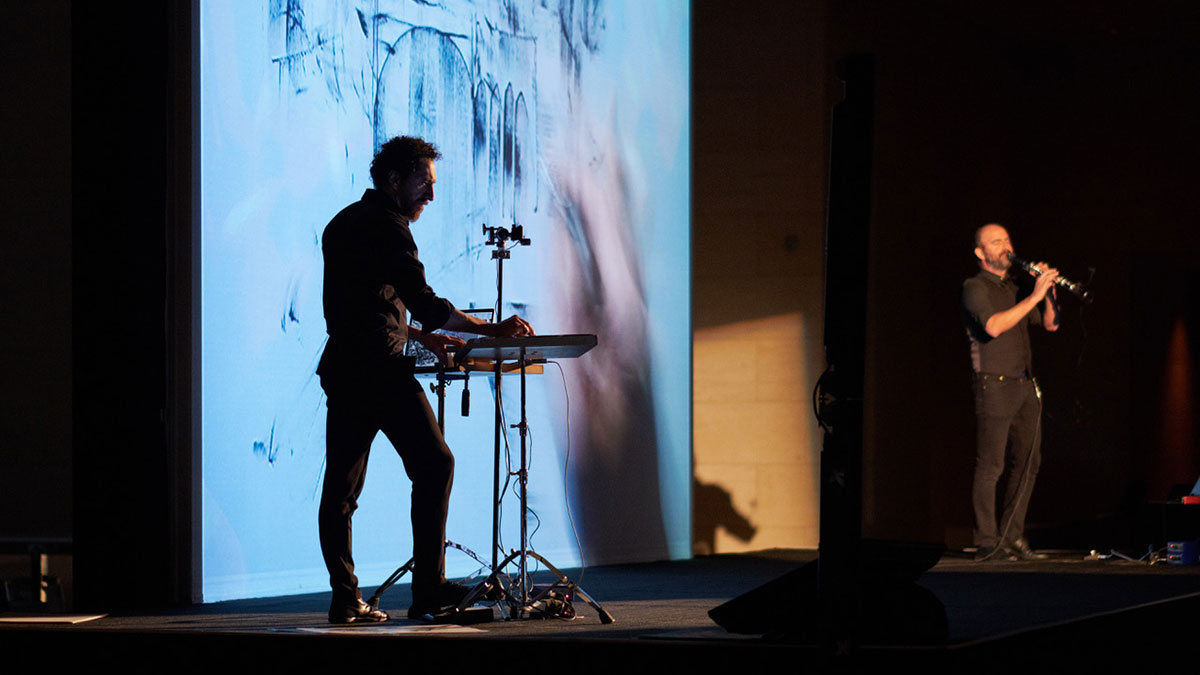 A 2012 performance of Home Within featuring Kevork Mourad and Kinan Azmeh. Photo By: Marc Pelletreau

Join us for a powerful collaborative performance between a renowned artist and two masterful musicians, as they reflect on what survives after the cultural destruction of war. Syrian-Armenian painter Kevork Mourad is acclaimed for his technique of live drawing and animation, during which he shares the stage with musicians. Syrian clarinetist Majd Sukar plays melodies that haunt and inspire, and Demetrios Petsalakis enhances the performance with his cross-genre talents on the oud. Together Mourad, Sukar, and Petsalakis will create an enthralling improvised piece in which art and music develop in counterpoint.

Tickets will be distributed on a first-come, first-served basis at the auditorium doors starting at 6:30 pm on the evening of the show.

Kevork Mourad was born in Qamishli, a town in northeastern Syria. Of Armenian heritage, he received his Master of Fine Arts from the Yerevan Institute of Fine Arts in Armenia, and now lives and works in New York. With his technique of live drawing and animation collaboratively with musicians, he has performed with Yo-Yo Ma, the Los Angeles Master Chorale, Brooklyn Rider, The Knights, Perspectives Ensemble, and Kinan Azmeh. Mourad is a member, as a visual artist, of Yo-Yo Ma’s Silk Road Ensemble. He has performed around the world including at the Brooklyn Museum of Art, The Bronx Museum of Art, Harvard University, the Morgenland Festival, Le Festival du Monde Arabe in Montreal, the Nara Museum in Japan, Lincoln Center Atrium, the Art Institute of Chicago, the American Museum of Natural History, the Metropolitan Museum of Art, the Carnegie Hall, and at the Aga Khan Museum where he performed Home Within with Kinan Azmeh.

Majd Sukar is a clarinetist from Homs, Syria. He lives in Toronto where he studies Jazz Performance at Humber College and plays in the Canadian Arabic Orchestra.

Demetrios Petsalakis is an oud player originally from Athens, Greece, and currently based in Toronto. He holds a Master of Music from the University of Toronto and a Bachelor of Fine Arts from York University. Influenced by the rich cultural diversity of Canada, Petsalakis incorporates musical elements from different traditions to create a contemporary sound that represents his heritage and the community of which he is a part. He plays in several groups including, the New Canadian Global Orchestra, Tafelmusik, Ventanas, Near East, and Spiral Modes.