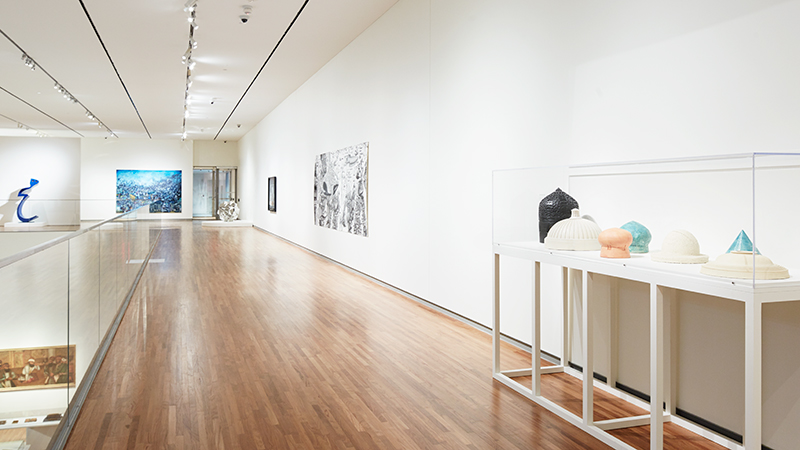 Meet some of the rebels, jesters, mystics, and poets at the centre of this fascinating exhibition, and explore some key questions it raises, such as, “Who are Persians today?” Coinciding with Doors Open at the Museum, our spring symposium features lively roundtable discussion and artists’ talks.

Afruz Amighi, born in Iran in 1974, has exhibited her work in the United States, London, and the Middle East. In 2009, she was the inaugural recipient of the Jameel Prize for Middle Eastern Contemporary art awarded by the Victoria & Albert Museum in London, and in 2011, she was granted the fellowship in sculpture by the New York Foundation for the Arts. In 2013, Amighi’s work was commissioned for the 55th Venice Biennale. Her work is also included in the collections of the Metropolitan Museum of Art, the Houston Museum of Fine Art, the Victoria & Albert Museum, and The Devi Foundation, among others.

Nazgol Ansarinia was born in 1979 in Tehran. She graduated from the London College of Communication in 2001 before completing a Master of Fine Arts at the California College of the Arts (CCA) in San Francisco in 2003. She has been included in group and solo exhibitions, including Variable Dimensions, Museum of Art, Architecture and Technology, Lisbon, Portugal (2017); The Eighth Climate (What Does Art Do?), Gwangju Biennale, Gwangju, Korea (2016); and Surfaces & Solids, Green Art Gallery, Dubai, UAE (2015). In her art, Ansarinia covers diverse media ranging from video and 3D printed models to murals and drawings.

Mahmoud Bakhshi, born in 1977, lives and works in Tehran. His previous exhibitions include The Unity of Time and Place, narrative projects, London (2017); Endless Celebration, a temporary intervention to the former Lenin monument plinth, Kiev (2016); The Great Game, National Pavilion of Iran at the 56th International Art Exhibition La Biennale di Venezia; All the World’s Futures curated by Okwui Enwezor, Venice (2015); Too early, too late. Middle East and Modernity, Pinacoteca Nazionale di Bologna (2015); TalkCloud, Niavaran Cultural Centre, Tehran and narrative projects, London (2014); Recalling the Future: post-revolutionary Iranian art, Brunei Gallery, SOAS, University of London (2014); and Love Me/Love Me Not, Contemporary Art from Azerbaijan and its Neighbors, The 55th Venice Biennale, Venice (2013). In 2004, Bakhshi established BON-GAH, a non-profit initiative and art books publishing house. In 2012, BON-GAH moved to a new warehouse-style space just outside of Tehran. The new building has allowed for the project to further develop, and it now incorporates artist studios, production facilities, and an exhibition space.

Ali Banisadr was born in Tehran in 1976 and moved to the United States when he was a child. He has exhibited internationally as a solo artist as well as in group exhibitions. His recent solo exhibitions include Trust in the future, Sperone Westwater, New York (2017); In Medias Res, Galerie Thaddaeus Ropac, Paris; and At Once, BlainSouthern, London (2015). He currently lives in Brooklyn, New York.

Fereshteh Daftari, curator of the exhibition Rebel, Jester, Mystic, Poet: Contemporary Persians, was formerly a curator in the department of Painting and Sculpture at The Museum of Modern Art in New York where, among various exhibitions, she curated Without Boundary: Seventeen Ways of Looking. Her doctoral dissertation, The Influence of Persian Art on Gauguin, Matisse and Kandinsky, was published in 1991. Another Modernism: An Iranian Perspective and Redefining Modernism, the essays she wrote for two exhibitions she co-curated in New York (Between Word and Image in 2002 at New York University's Grey Art Gallery, and Iran Modern in 2013 at the Asia Society Museum), are being used as introductory texts in the field of Iranian modernism. She is currently finishing a book on Iranian modern and contemporary art.

Dr. Ahmad Karimi-Hakkak is a professor and founding director of the University of Maryland’s Roshan Center for Persian Studies in the School of Languages, Literatures and Cultures. During his career, Dr. Karimi-Hakkak has authored 19 books and more than 100 major scholarly articles. For nearly 20 years, he was professor of Persian language and literature, and Iranian culture and civilization at the University of Washington, and he has contributed articles on Iran and Persian literature to many reference works, including The Encyclopedia Britannica, The Encyclopaedia Iranica, and The Encyclopedia of Translation Studies.