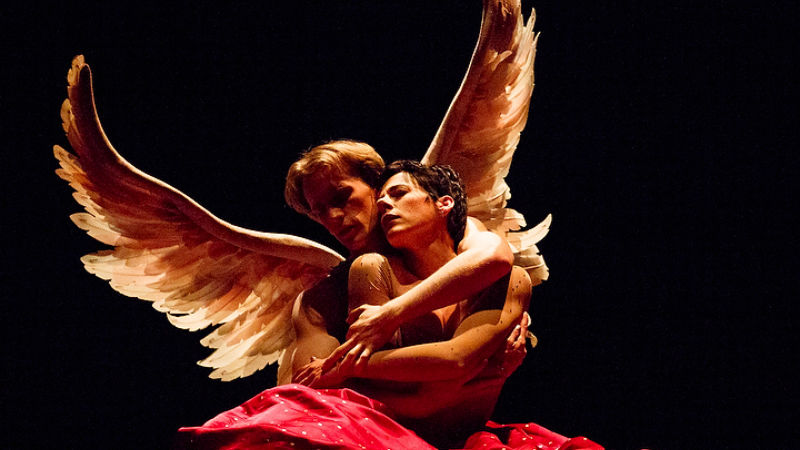 The Muslim and Christian worlds collide in Armide, an opera in which the invincible Christian knight Renaud and the Muslim warrior princess Armide play out their doomed love affair against a backdrop of hopeless obsession, jealousy, and magic.

The Muslim and Christian worlds collide in Armide, an opera in which the invincible Christian knight Renaud and the Muslim warrior princess Armide play out their doomed love affair against a backdrop of hopeless obsession, jealousy, and magic.

The Aga Khan Museum, in partnership with Opera Atelier, is proud to present an intimate exhibition of elements from their internationally-lauded production of Armide. The exhibit will showcase the stunning set and costume designs of Canadian Gerard Gauci, including set designs and models, and the title character's costume.

Be sure to catch Armide at the Elgin Theatre in downtown Toronto, running from October 22 to 31.

ABOUT ARMIDE
Jean Baptiste Lully’s operatic masterpiece Armide is a story of conflict between the Muslim and Christian worlds set during the First Crusade. It was inspired by Torquato Tasso’s epic poem “La Gerusalemme liberate.” Armide is a Muslim warrior princess possessed of magical powers and Renaud the Christian knight is her sworn enemy. This tragédie en musique premiered in Paris in 1686 at the Théâtre du Palais-Royal. It follows Armide as she navigates her heart through hatred for Renaud, then love, and finally despair. In 2005 Opera Atelier presented the North American premiere of Armide to thunderous applause and rave reviews, and it quickly became a signature work for the company. In 2012 its revival debuted at the Opéra Royal at Versailles, and its success was so great that it will return to reprise the work in November 2015, after performances in Toronto.

ABOUT THE DESIGN
Gerard Gauci created the designs for Armide. During his research phase, Gauci realized that when Lully and his librettist Phillipe Quinault were penning their opera in France, scribes and artists in Persia were adorning manuscripts with finely detailed, jewel-toned artwork and elegant calligraphy. Gauci looked to these miniature paintings for his inspiration. He created sets that incorporated the brilliant colours, stylized perspective, and intricate patterns that characterize these exquisite works of art. He also had parts of the French libretto translated into Persian and introduced calligraphic panels into Armide’s scenery, thereby setting the stage as a page from a manuscript come to life.