“You are not a drop in the ocean. You are the entire ocean in a drop” — Jalal al-Din Rumi

Mahtab Hussain is a British artist (b. 1981) who, in the wake of 9/11, embarked on a series of photographic street portraits of Muslims, first in the UK (London, Birmingham, Bradford, Nottingham) and then New York and Toronto, with the aim to address and challenge the poor visibility and stereotyping of Muslims in mainstream art and media.

Presented as part of the Scotiabank CONTACT Photography Festival, An Ocean in a Drop: Muslims in Toronto is entitled after a poem by the 13th-century Persian poet Rumi about the uniqueness and universality of the human condition. In the exhibition, Hussain turns his lens on the city’s Muslim youth in ways that bring to the fore their unique individual identities, contributions, and perspectives. The portraits are accompanied by personal statements, based on the Scottish-born artist’s conversations with the sitters, providing further insight into their stories — both positive and negative — of everyday life in Toronto.

Ruze, for example, speaks about her choice to wear a hijab, and how that choice brings with it societal pressure and negative experiences, affecting her interactions with those within and outside of her community. Rishada, meanwhile, is disillusioned with the city’s touted image as a place of acceptance and racial and cultural harmony, and Yavuz grapples with the fact that there is a stereotype, believed by many, that all Muslims are Middle Eastern, when, in fact, they come from a whole host of diverse and complex geographic and cultural backgrounds.

Mahtab Hussain has his sitters gaze directly into the lens, without affectation, and positioned against the background of their urban Toronto neighbourhoods — the visual composition projecting both the local and the universal. Meanwhile, his portraits also speak of a community often oversimplified and represented as homogenous.

Ultimately, through the artist’s succinct and unflinching approach, a powerful story emerges, one that bears witness to the individuality of young Muslims who aspire to assert their personal, cultural, and spiritual bearings in a sometimes-adverse world.

It was my intention to arrive in New York for the 20th anniversary of 9/11, an incredibly significant moment, especially since it coincided with the US withdrawal of troops from Afghanistan. The time felt right to begin making photographic portraits, and to start new conversations about Muslim experience, community and identity across the United States. But due to COVID restrictions, I chose to travel via Toronto and to begin work there. The encounters I had in Toronto made a lasting impression on me. The incredible optimism and warmth I experienced through the people I met and photographed helped define a new starting point for this series. I am grateful that my journey led me here, and that Toronto proved such a fertile and rewarding experience. It turned out to be exactly the right place to start. 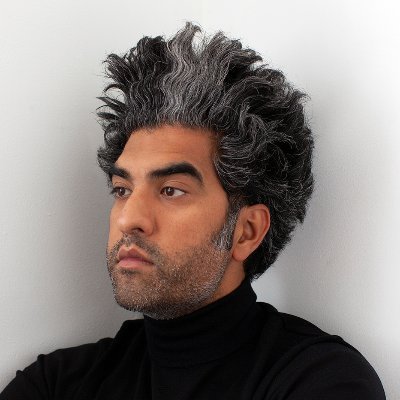 Mahtab Hussain received a BA in History of Art at Goldsmith College, specializing in Fine Art Photography, and an MA in Museum and Gallery Management from City University in London, England. He was awarded an Arts Humanities Research Council Grant and completed an MA in Photography at Nottingham Trent University.

Hussain has received numerous awards and commissions and has published four artist books. In 2017, his series You Get Me?, published by MACK Books, won the Light Work Photobook Award.

Exhibition
IMAGE? The Power of the Visual
April 9–September 5, 2022

Exhibition
A Romance of Many Dimensions
April 15–June 5, 2022

Presented in partnership with