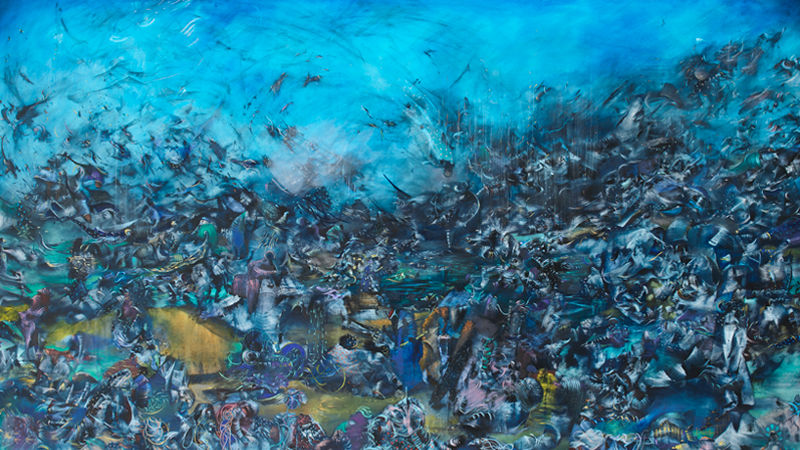 Are “cultural rebellion and lyrical reflection” key features of Iranian art today, or of contemporary art in general? Be inspired by keynote talks and lively discussion when Canadian and International artists and scholars gather for this one-day symposium. Tour of the Rebel, Jester, Mystic, Poet: Contemporary Persians exhibition included.

Jovanna Scorsone (Convener) is the Education Manager at the Aga Khan Museum in Toronto and is responsible for the delivery of dynamic, thought provoking programs for diverse audiences, including intergenerational general visitors, school children, and academics. She holds a Masters in Museum Studies from University College London, and a Masters in Egyptology from the University of Toronto. Her work in museum learning and interpretation has spanned museums in Canada, Syria, Korea, Northern Ireland, and the UK.

Jamelie Hassan (Convener) is a visual artist based in London, Ontario, Canada. She has coordinated several international programs, including Orientalism and Ephemera, a national touring exhibition, originally presented at Art Metropole, Toronto. Her works have been featured in many public collections, including the National Gallery of Canada, Ottawa; the Art Gallery of Ontario, Toronto; Museum London, London, Ontario; the Morris and Helen Belkin Art Gallery, the University of British Columbia, Vancouver; and the New Museum, New York, NY. Nur, an off-site project that was part of the Transformation of Canadian Landscape Art: The Inside and Outside of Being was installed in the library of the Great Mosque of Xi'an, China in 2014.

Venetia Porter is a curator at the British Museum, responsible for the collection of Islamic art, in particular of the Arab World and Turkey, as well as developing the collection of the modern and contemporary art of the Middle East. Venetia was previously curator of Islamic coins in the Department of Coins and Medals. She gained a degree in Arabic and Persian at the University of Oxford, followed by a MPhil in Islamic Art, obtaining her PhD on “The History and Monuments of the Tahirid Dynasty of the Yemen 858-923/1454-1517” from the University of Durham. She recently curated the exhibition Hajj: Journey to the Heart of Islam (2012).

Wanda Nanibush is an Anishinaabe-kwe image and word warrior from Beausoliel First Nation. She is the first curator of Canadian and Indigenous Art at the Art Gallery of Ontario (AGO). Her exhibition Toronto: Tributes + Tributaries, 1971-1989 is on display at the AGO until May 2017. Nanibush has a Masters in Visual Studies from the University of Toronto, where she has also designed and taught graduate courses.

Gita Hashemi is an artist whose experimental transmedia practice span over thirty years and encompass works that draw on visual, media, performance, site specific, and live art strategies. Exploring social relations and the interconnections of language and culture, Gita’s work is centered on marginalized histories and contemporary politics, often with an eye on women’s experiences. A highly trained calligrapher, Gita often uses the writing process as live performance and/or visual material in video, installation, image/text, and net art production. Recurrent themes include decolonial acts and cultures of resistance, from 18th Century East/West encounters and 1953 coup in Iran to the 1979 Revolution and indigenous land rights in Palestine and Turtle Island. Her work is presently on display as part of the Grieving Empire exhibition at A Space Gallery, Toronto.

Mani Mazinani is an artist who produces artworks in multiple media including installation, video, film, photography, painting, printmaking, sound, and music. His work directs attention to the physicality and logic of his subject medium; current research interests include origins of ancient philosophical thought, perceptual limitations of humans, hip-hop culture, and woodworking. Mani’s work has been shown in North America, Europe and Asia. His Light Air (2010) was featured in a two-person show with Michael Snow for the Luminato Festival, while Screen Scene and Oracle (2011) were the subject of a solo show at Vtape, and most recently a large scale sound installation, Anciently Heard (2015) was commissioned by Scotiabank Nuit Blanche.

Rinaldo Walcott is an Associate Professor and Director of the Women and Gender Studies Institute at the University of Toronto. Rinaldo is the author of Black Like Who: Writing Black Canada (Insomniac Press, 1997 with a second revised edition in 2003); he is also the editor of Rude: Contemporary Black Canadian Cultural Criticism (Insomniac, 2000). In addition to his solo efforts, Rinaldo is the co-editor (with Roy Moodley) of Counselling Across and Beyond Cultures: Exploring the Work of Clemment Vontress in Clinical Practice (University of Toronto Press, 2010). His most recent book is Queer Returns: Essays on Multiculturalism, Diaspora and Black Studies (Insomniac Press, 2016). Rinaldo’s research is centered in Black diaspora politics, gender and sexuality, and decolonial politics.

Swapnaa Tamhane has been closely studying the Indian performance artist Rummana Hussain (1952-1999). Her research developed into the large group exhibition In Order to Join — The Political in a Historical Moment, exploring an international generation of women artists born between 1947 and 1957. This exhibition was held at Städtisches Museum Abteiberg Mönchengladbach, Germany, and Gallery MMB, and Chatrapati Shivaji Maharaj Vastu Sangrahalaya, Mumbai, India from 2014 to 2015. Swapnaa has exhibited at FOCUS Photography Festival, Mumbai; Art Gallery of Mississauga; Gallery Seven, Delhi; and A Space Gallery, Toronto. Her book, Sar: The Essence of Indian Design (Phaidon Press, 2016), curated with fashion designer Rashmi Varma, explores the history of material culture and memory.