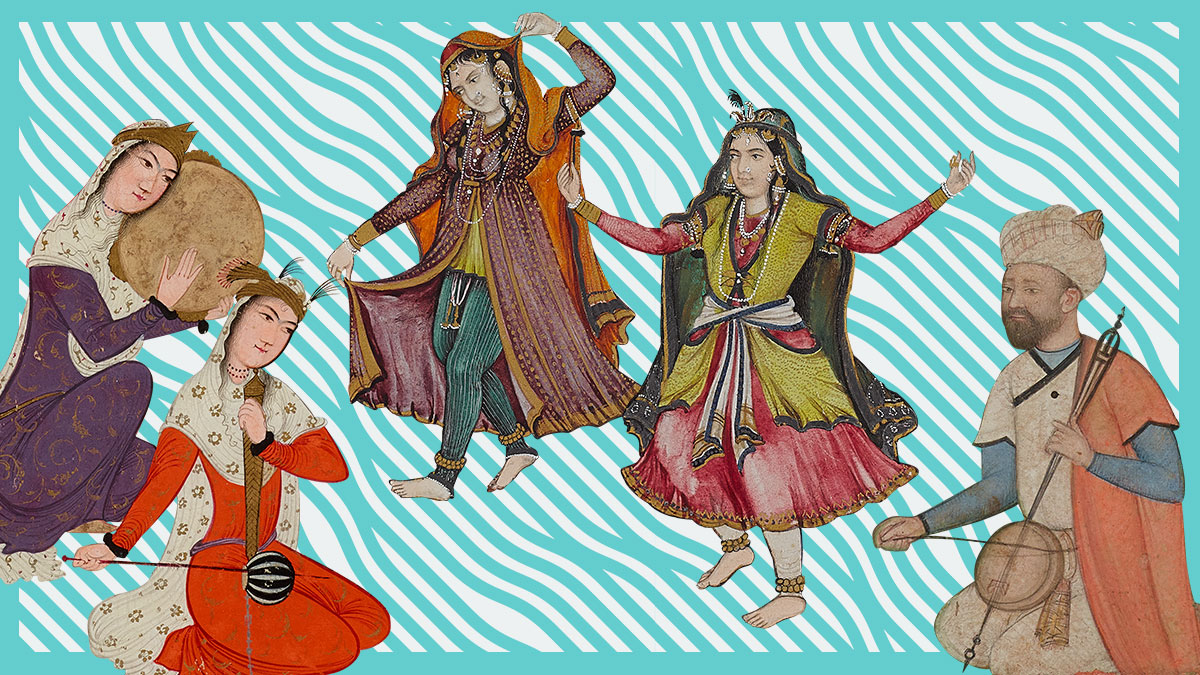 Pop-up Performances for 2020 are every Wednesday, Friday and Saturday in the Museum's public spaces and galleries.

Throughout the season, experience poetry, music and dance that reflects the rich tapestry of diverse world regions, from the Balkans to the Nordic countries, from the Middle East to Asia. Enjoy informal performances – of jazz, Latin, Persian, traditional Asian music, and more – by a range of captivating artists in the Museum’s public spaces and galleries.

Join us every week for a new Pop-Up experience

A musician, instrument-maker, and ethnomusicologist, Nuno Cristo was born in Lisbon, Portugal, and holds a Master’s degree in Music from York University, Toronto. Cristo specializes in Portuguese guitar as a solo artist and plays fado with ensembles Banza Duo and Anima Fado. A recipient of grants from the Toronto Arts Council, the Ontario Arts Council, and the Canada Council for the Arts, Cristo has self-produced two CDs, collaborated with Nelly Furtado, Béla, and others, recorded live for CBC radio, and played internationally in the US, Macau, and Portugal.

Toronto-based singer-songwriter, violinist, composer, and improviser Cassie Norton has released two full-length albums as a solo artist and recorded with numerous other musicians in Canada and abroad. Her current project and new EP, Lullaby for the end of Time, incorporates elements of improvisation, jazz, and folk music and features respected musicians from Toronto's eclectic music communities.

Judith Cohen is a singer and ethnomusicologist. Known as a specialist in Sephardic Jewish music, she weaves together ballads and stories from Spain, Portugal, the Balkans, medieval Europe, and French Canada. Her old-world music focuses on vocals, embellished by instruments that follow the tone and melody of the voice. She has given talks at the Museum and teaches part-time at York University.

Bea Labikova is a Slovak-Canadian saxophonist and improviser. Her music draws from avant-garde, modern jazz, and Slovak folk music to explore the boundaries between free improvisation and composition. She is a founding member of new music ensembles future proof, Wow & Flutter, Lila Ensemble, and Quartet Pronk, and is the saxophonist for Triio and Afrobeat Ensemble. In her solo project Mt. Joy, she combines wind instruments with electronics to create sounds inspired by the Canadian Arctic.

Drawn to the santoor from an early age, Amin Reihani has dedicated himself to discovering every aspect of the instrument. Since mastering his technique at the University of Tehran he has been composing his own music, as well as teaching in Iran. On moving to Toronto he became involved with the local music community, playing with Sarv Ensemble, and has performed at festivals and in concerts across North America. He now plays with the Navak Ensemble, which he founded.

Soudabeh Badie, orginally from Isfahan, Iran, started piano at the age of five. She pursued violin, studying in the classical style with Hovik Baghoumian, and took lesson with Ali Tajvidi, Masoud Hasankhani, and Saeed Farajpouri in traditional musical genres. In 2005, she began studying the traditional gehychak alto with Reza Abaee. Badie has performed with the Vancouver Symphony Orchestra(VSO), Khojasteh Band and Hasankhani Band and with the musical band of the Ministry of Culture and Islamic Guidance in Iran.

Singer and dancer Shirlita La Pili dove into the world of flamenco at the age 12, and has studied with many master singers and dancers. She has performed at flamenco festivals across Canada and is deeply involved with the Toronto flamenco community, working with leading companies and local projects. Julian Berg took up flamenco guitar in his homeland, Norway, at age 15, and sought out training with masters in Spain and the Netherlands. He has performed across Europe and recently co-founded the Kitchener-Waterloo flamenco festival calujules.com.

Turkwaz combine and rearrange tunes from international musical traditions to create a unique sound of their own; merging everything from mysterious Sufi devotional love songs to Thracian dance music. Each performer in Turkwaz brings their own flavour to the group. Maryem Hassan Tollar draws on her Arabic language heritage, Jayne Brown and Sophia Grigoriadis bring their experience with Greek music and Brenna MacCrimmon adds her fascination with Turkish music.

Kianoush Khalilian is a composer and a highly skilled player of the ney (Persian reed flute). He began his studies with very distinguished Iranian masters, including Hasan Nahid in 1990 in Tehrana and within five years he ranked first in the nationwide Iranian school competition for ney performance. Kianoush has performed in concerts in Iran, Canada and across Europe, and has won awards for his outstanding teaching. He is about to publish his first book: a guide to learning the ney.

Colin Fisher is a multi-instrumentalist, composer and improviser, Alexander Technique Teacher and Tarot Reader. He is an active voice in the Improvised, Rock, Folk, Experimental and Creative Music Community in North America. For Colin the power of music exceeds classification and genre, it finds root in the expression of the biological organism and its relationship to the greater universe/creation which is defined by vibrations. Music can heal; serving as biofeedback to bring the organism back into balance/homeostasis.He has appeared on various labels such as Tzadik, Healing Power Records, Merge Records, Sub Pop, Tombed Visions, Medusa, Inyrdisc, Barnyard Records and many others.

Witness classical Indian choreography as Paromita Kar, the lead dancer of the Toronto-based Ensemble Topaz performs at the Museum. With a PhD in dance, Paromita Kar is the custodian of professional classical Indian Odissi dance, and a student of Guru Durgacharan Ranbir of Odisha, India. Paromita also professionally performs Central Asian dances, including Afghan, Iranian and Uyghur as well as those hailing from Middle Eastern and Romani heritages.

Wendy Zhou began to study the pipa at the age of five, and competed in the Youth Pipa Competition in Suzhou, China, receiving great praise. After immigrating to Canada in 2001, she began her studies with renowned pipa soloist, Ms. Gui-Lian Liu, and joined the B.C. Chinese Orchestra in 2002 as Section Leader. During this time, she won multiple awards in the Kiwanis Music Festival, and, in 2005, she was awarded the S.K. Lee Scholarship for Ethnic Instruments and won third place in the Kiwanis Gala Concert. Zhou subsequently completed the performance level in the Chinese Conservatory of Music Exam for pipa in 2007 and was highly praised for her performing abilities and sense of music. In 2010, she co-founded Spire and began to explore the boundaries between Eastern and Western music through rearranging and composing multiple pieces for the group.

Toronto based vocalist, improviser and electronic sound artist, Laura Swankey hails from the base of Mount Seymour on the edge of Vancouver, BC. Calling Toronto home since 2012, Laura is known for her rich voice, wide range and imaginative spirit. This solo project from Laura combines dry and processed voice to create soundscapes beneath simple, earnest melodies and stories. Sound that is lush and minimalist at some moments, can be dense, raw and abrasive at others. Drawing from deeply personal experiences, observations about rapidly shifting culture and concerns for our environment.

Professional storytellers Dawne McFarlane and vocalist Maryem Tollar come together for a special performance. Growing up with a belief in faeries, Dawne has been telling stories around campfires, kitchen tables, in classrooms and international festivals. She teaches the art of storytelling to teachers in Canada and abroad and is the Artistic Director of the Toronto Storytelling Festival.

Maryem Tollar is an Egyptian-Canadian vocalist and composer and performer. She is a member of Al Qahwa, a quartet that performs traditional Arabic music alongside original music; and the group Turkwaz, whose recording Nazar was nominated for a Juno for World Music Album of the year in 2017. Maryem was featured in Tafelmusik’s production Tales of Two Cities: The Leipzig-Damascus Coffee Houses.

Interested in becoming a pop-up performer? Submit your application here.

More listings to come. Please check back regularly for updates.