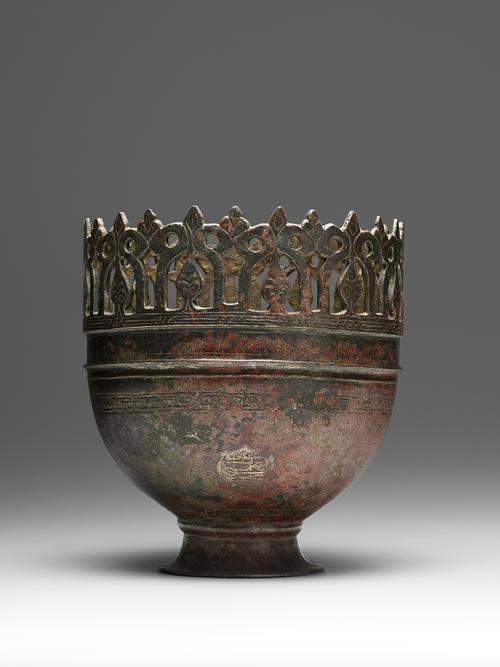 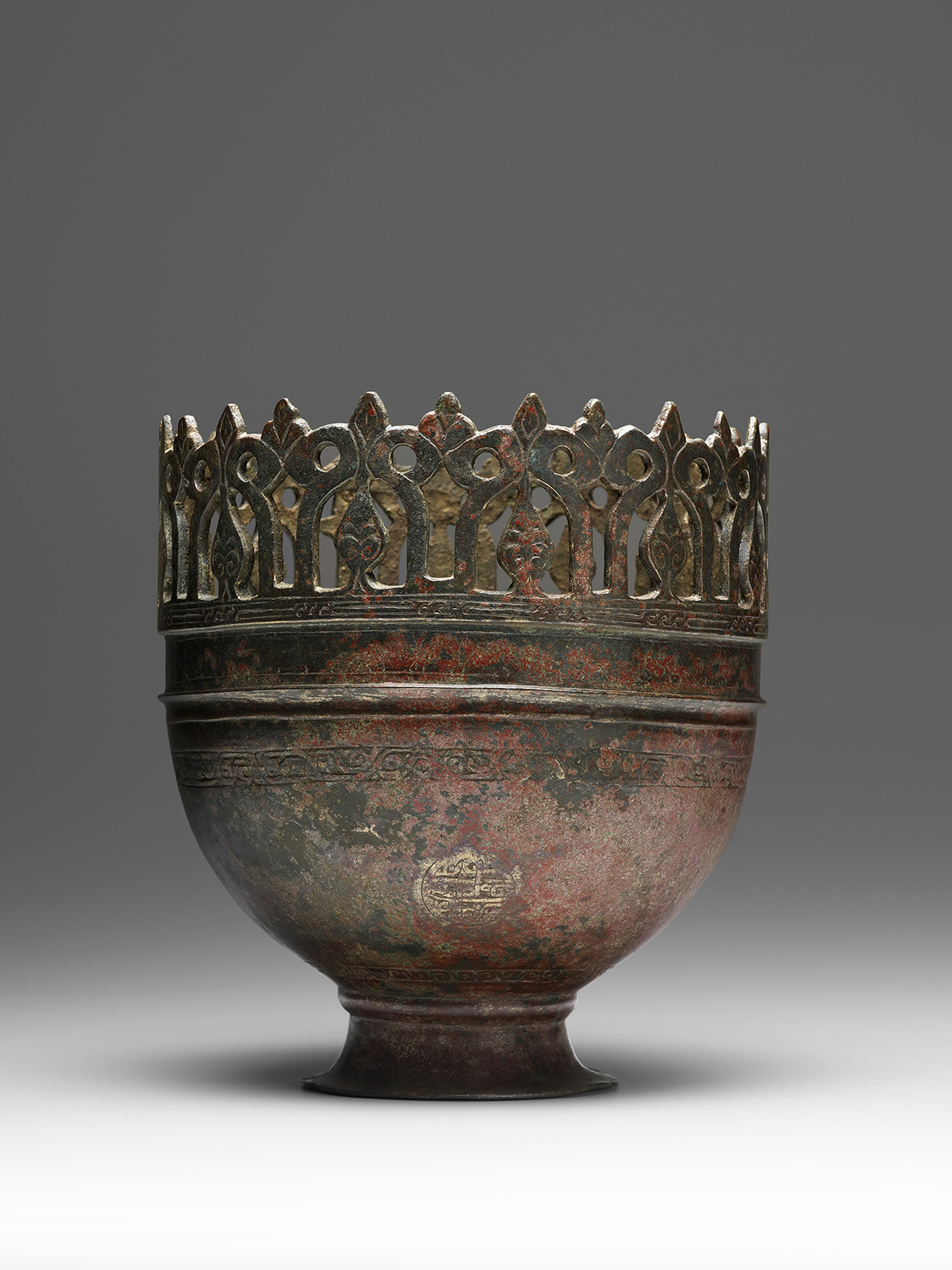 The vessel’s shape and decoration suggest its function. Around the top of the bowl is a perforated crown which features alternating decorations of both curling leaves and palmettes surmounted by cuspidate (pointed) leaves. On its body, an engraved band decorated with plant sprays appears above three medallions bearing plant motifs. The ceramic version of the container is identified as an alfabeguer, which means a vase for a basil plant. The word comes from both the Arabic word al-habaqa and the Valencian word alfabaga. [1] Due to their strong fragrance, basil plants were stored in such containers on windowsills and balconies during the hottest months of the year in an effort to keep insects at bay. During the Renaissance, similar vessels were often to be found in aristocratic homes, where they were used as containers for aromatic plants. As depicted in paintings and miniatures of the 15th and 16th centuries, they became part of the room’s interior décor, which also included glass and metal objects, carpets, and furniture.

The ceramic versions are similar in shape to this bronze model in the Aga Khan Museum Collection. They are finished with a crown of alternating cuspidate leaves and rings made separately and then fused together during the firing in the kiln with the maiolica glaze. On some of them we can identify four semi-cylindrical openings placed radially around the body to provide a channel to the interior of the container that would help irrigate the plant. These vessels are typically decorated with blue geometric patterns and plant motifs which are, in turn, enhanced by the sheen of the metallic lustres. The Moorish potters perfected the technique of producing these lustreware pieces in their Valencian kilns.

The famous Rothschild alfabeguer of Waddesdon Manor[2]—an example that was modelled after this bronze vessel in the Aga Khan Museum Collection—always comes to mind when one discusses this type of vase because it is flawless and almost completely intact. In addition to this piece, there are other similar vases in fairly good condition that are kept at the Design Museum of Barcelona (Museu del Disseny), the Instituto Valencia de Don Juan in Madrid, the Museo Municipal de Cerámica in Paterna, the Museo Archeologico Nazionale in Cagliari, and at the Bargello National Museum in Florence. All other known examples—located mainly in Spain and in Italy, with a few in the Eastern Pyrenees (Collioure), the Netherlands (Sluis) and in London—are remnants, essentially fragments that no longer show their original colours.[3]

In addition to the aforementioned pieces, one may also consult the available archival information regarding the alfabeguer trade that took place between the end of the 14th century and the 15th century and beyond.[4] Many Iberian vases (originally produced for both ornamental and aromatic plants) are also depicted on 15th-century panels and miniatures. For example, the vases painted by Bartolomeo Vivarini in the Madonna della Salute, located in the Basilica dei Frari in Venice, and in two of Antonello da Messina’s works, the Annunciazione (in Palazzo Bellomo in Siracusa) and S. Girolamo nello studio (in the National Gallery of London).[5]

Between the end of the 14th century and the 15th century, a large quantity of Hispano-Moorish maiolica pieces with metallic lustre left Valencia, entered the port of Pisa, and arrived in Tuscan markets. Wealthy families of Florence often ordered pieces from Moorish potters and requested their family’s coat-of-arms to be painted on the objects. These orders were made possible by the widespread activity of mercantile companies in Florence and Prato—like that of Francesco Datini—that had connections in various Spanish markets. Thus, these connections made it possible to manage each phase of the family’s commission: from the moment the order was placed to the specification of the crest that had to be reproduced on the object; from the order’s progress in the kiln and finally, to its delivery to the client.