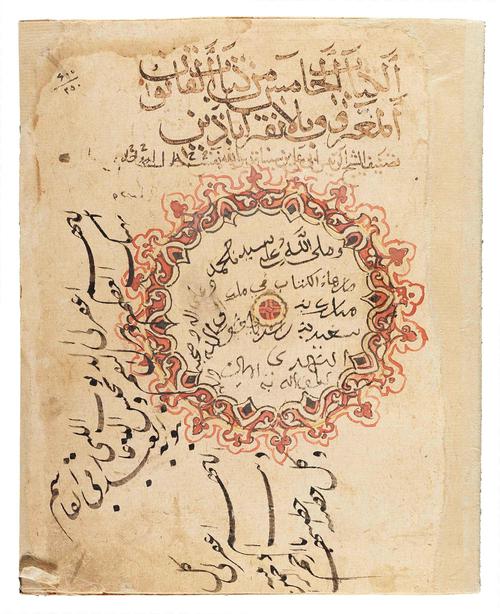 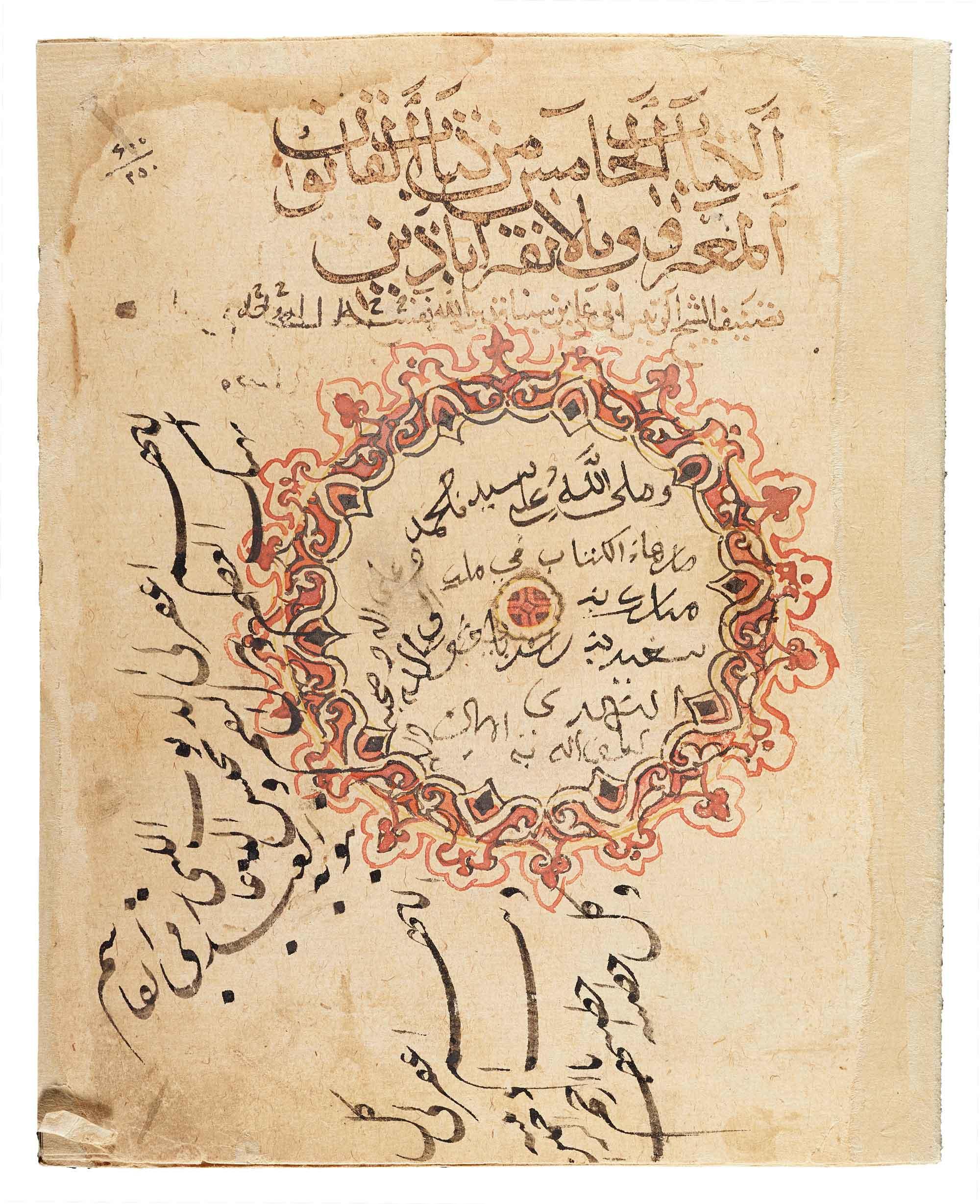 The title page of Volume 5 announces in large thuluth script that the manuscript contains the fifth book of Qanun on compound drugs and pharmaceuticals, featuring some 650 compounded prescriptions—theriacs, electuaries, potions, syrups, and more.[1] It is followed immediately by Ibn Sina’s full name, al-Shaykh al-Rais Abi Ali ibn Sina, written in naskh. The other scripts around the page, written in naskh and nastaliq, reveal the names of previous owners of the codex.[2]

The life story of Ibn Sina is as exciting as the time he lived in.[3] Ibn Sina was born in the late 10th century in Bukhara, then the capital of the Samanid Empire. Under the rule of the Samanids, an Iranian dynasty, Bukhara competed with Baghdad in the advancement of science and scholarship. Ibn Sina’s father, a state official, was able to provide Ibn Sina with the best education of the mediaeval period.

Ibn Sina began his education by learning to read through close study of the Qur’an, as the traditional education at madrasa required. Ibn Sina shares with us in his own words that he had memorized the Qur’an by age 10 and mastered medicine by age 18 and became a physician. In 997, he cured the Samanid ruler of Bukhara, Nuh II, from a mysterious illness, and, in gratitude, Nuh II granted him access to the royal library, where he became acquainted with classical works, science, and philosophy of the ancient world. Over his lifetime, Ibn Sina published dozens of books across numerous fields, including mathematics, astronomy, metaphysics, music, and poetry.

After the collapse of Samanid rule, Ibn Sina began to travel from city to city to find a suitable patron for his works. In the second decade of the 11th century he found shelter with a friend in Gurgan, where he wrote the Canon of Medicine.[4]

The secret of the Canon of Medicine’s long popularity lay both in Ibn Sina's clear description and diagnosis, and in the fact that he gathered together, in one work, the disparate doctrines of Hippocrates, Galen, Aristotle, and other ancient physicians. The example of Ibn Sina’s Canon of Medicine demonstrates the importance of the transmission of knowledge in preserving the world’s intellectual heritage.

2. The translations are provided by Abdullah Ghouchani in Treasures of the Aga Khan Museum, 94.

3. The princely patronage of intellectual culture is one of the key aspects of court life in the Islamic world and elsewhere. Hosting outstanding poets and scholars at the court enhanced the ruler’s royal profile and demonstrated the ruler’s own intellectual capacity and knowledge. Royal libraries (such as the House of Wisdom in Baghdad) and the presence of excellent scholars at court provided a high quality education for the patrons. An early example of royal patronage supporting advanced intellectual development was the so-called “translation movement,” which took place in Baghdad during the time of the Abbasid Caliphate between the 8th to 10th centuries. The first stage of the period in the Islamic World is described as the golden age of intellectual history. During that time, cities such as Baghdad, Damascus, Cairo, Alexandria, Cordoba, and Bukhara became centres of learning and knowledge, as texts from the Greek, Persian, Indian, and Chinese traditions were studied, translated into Arabic, and disseminated in the exploration of scientific knowledge. Fields of study such as astronomy, anatomy, mathematics, medicine, physics, and geography flourished and were accompanied by the creation of schools, libraries, universities, and research institutions, such as observatories and hospitals. Many of the advancements made during this time were later transmitted to Europe, significantly advancing modern scholarship.

4. Avicenna spent over a 12-year period between 1012 and 1024 completing the Canon of Medicine. See d' Andiran, Gérald; Fondation Martin Bodmer (Cologny); et al., Early medicine, from the body to the stars, 212.