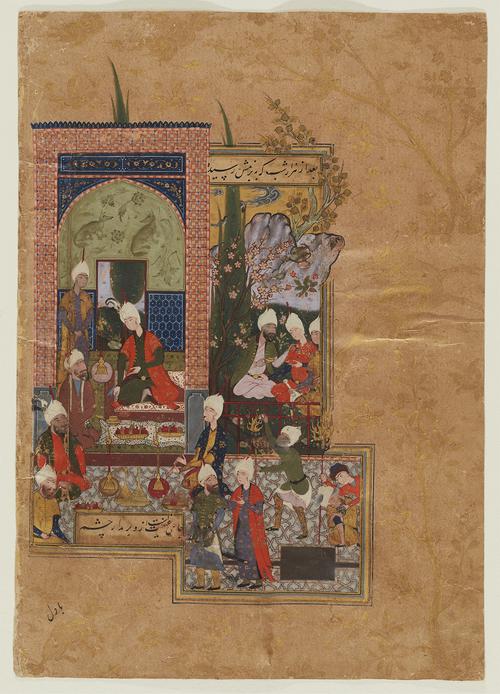 AKM282.43, Princely Entertainment in a Palace at Night, Folio from a manuscript of the Collected Works (Divan) of Sultan Ibrahim Mirza (fol. 43) , Fol.43v 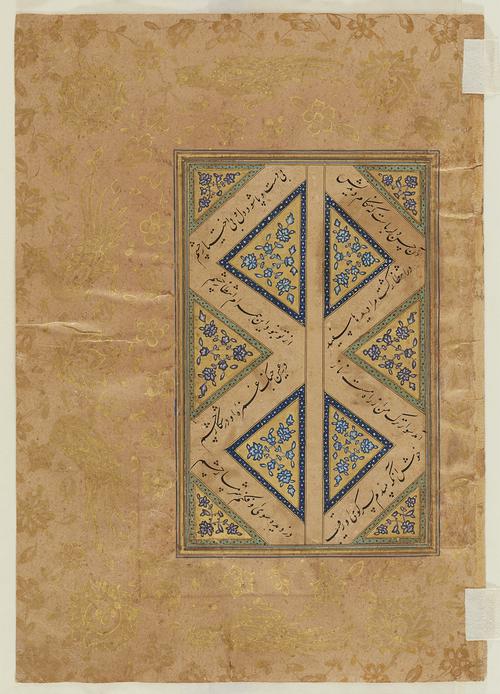 AKM282.43, Princely Entertainment in a Palace at Night, Folio from a manuscript of the Collected Works (Divan) of Sultan Ibrahim Mirza (fol. 43) , Fol.43r 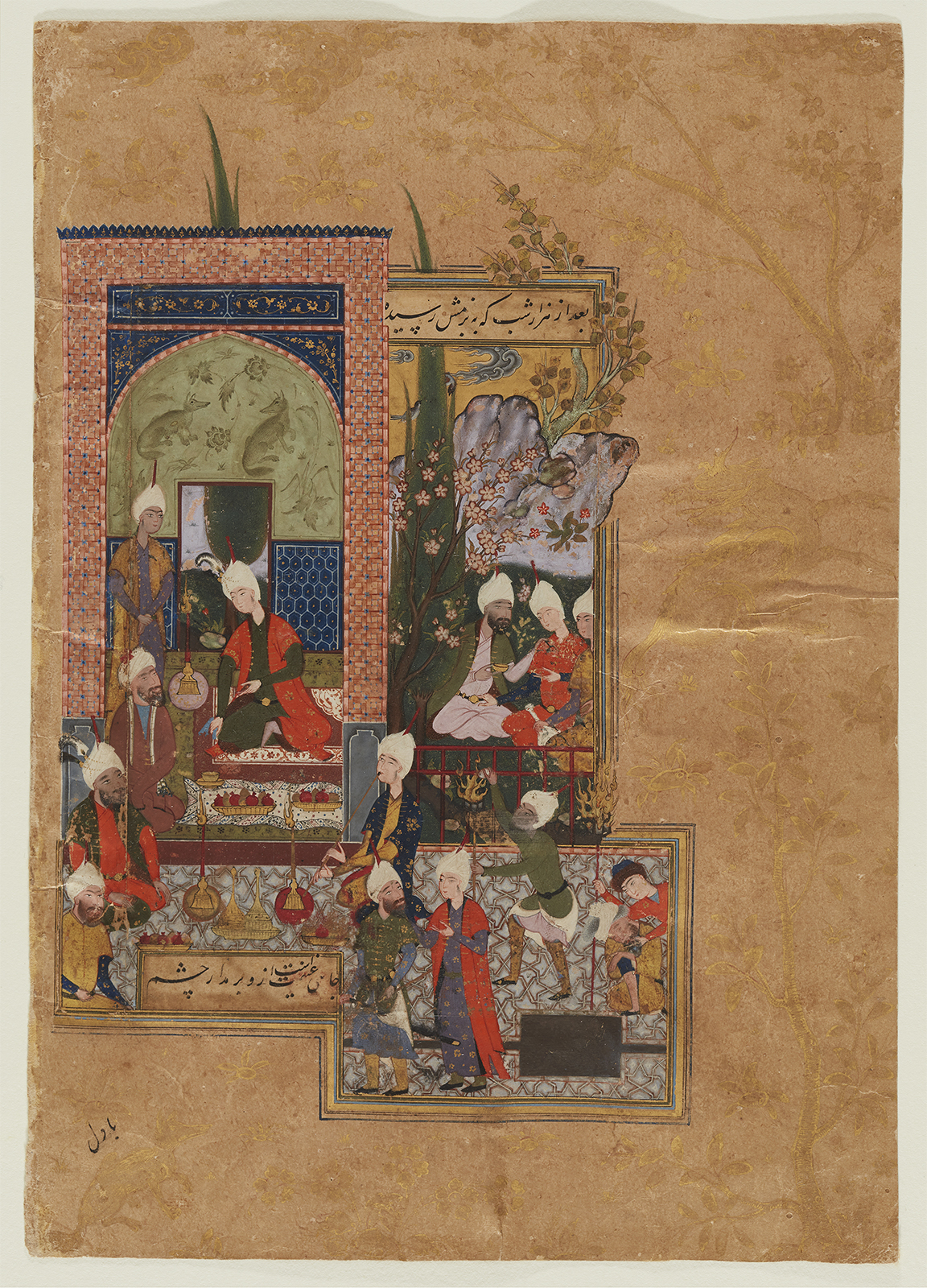 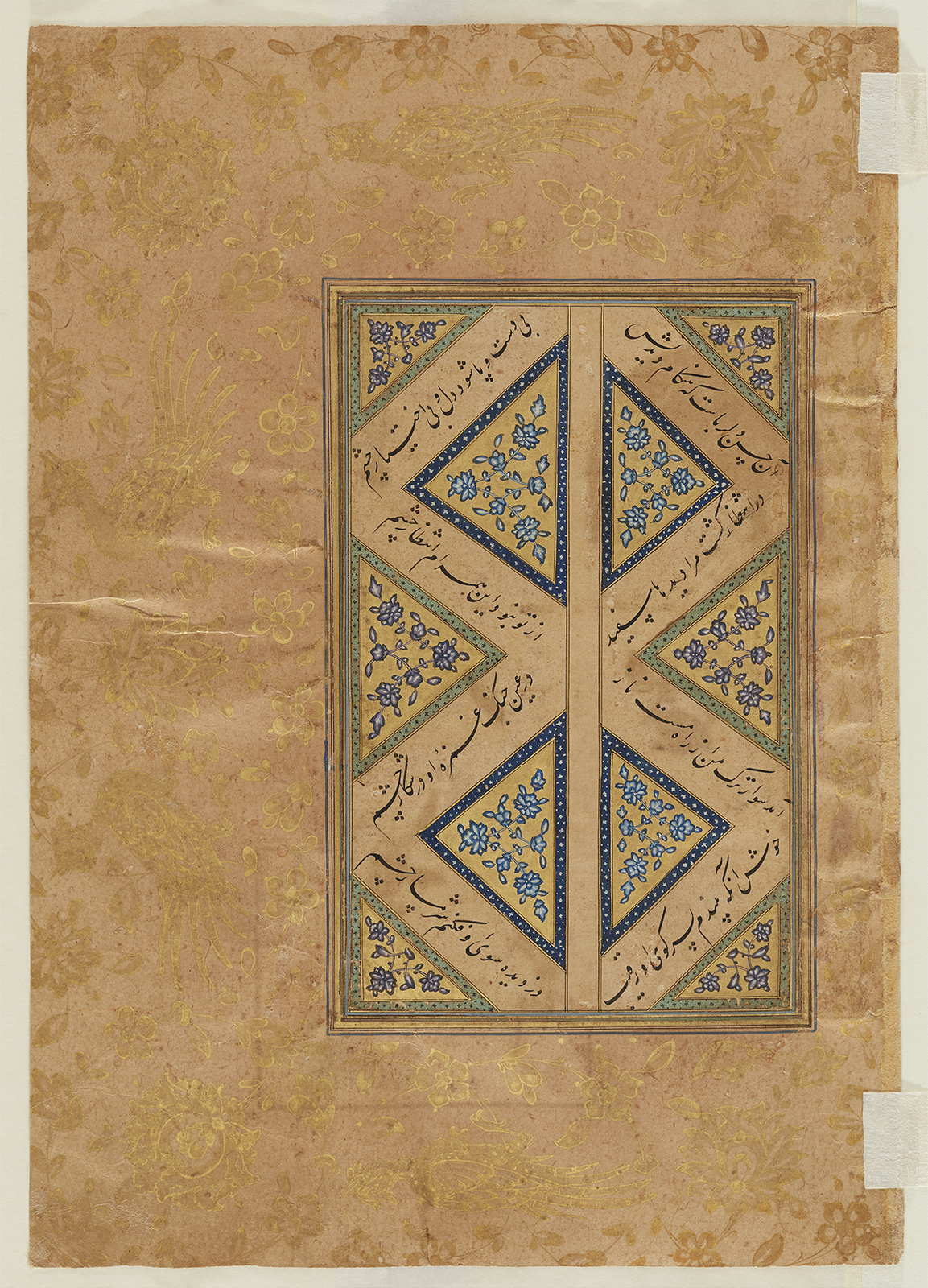 Princely Entertainment in a Palace at Night

Folio from a manuscript of the Collected Works (Divan) of Sultan Ibrahim Mirza (fol. 43)

As in all traditional banquet representations, there is music, provided by a flutist playing a reed ney, and plenty of food and drink, signalled by golden wine cups and flasks and by bowls of fruit. The reception’s host is the young nobleman or prince seated cross-legged beneath the ivan who turns with a gesture of speech to an older, bearded guest. Judging from the long sleeves of this man’s plain brown robe crossed over his lap and his simple turban, he may be a Sufi dervish or spiritual master (called a pir) whose counsel the prince seeks. The other banquet guests include courtiers engaged in lively conversation and perhaps poetry recitation (another common bazm feature) on the terrace and in the garden, as well as an attendant standing near the prince. A comic, although not entirely unusual, note is introduced by the torch bearer at the far right who tries to rouse a sleeping companion while maintaining his torch upright.

The production of such a deluxe manuscript would have involved, first, the copying out of the poetry, and then, the painting of the illustrations, the addition of the ruling lines around written and painted surfaces, and the decoration of the margins. The initial phases of this process are revealed here by the way the palace’s brick façade is recessed at its right edge so as to avoid painting over the last word of the couplet in the upper right text panel.

The iconography of the scene may have been directly inspired by the mention of the word bazm in the second verse of this ghazal (AKM282.42) in which the poet (that is, Sultan Ibrahim Mirza) expresses his love for another that had been kept hidden until one glance revealed the secret at a banquet. Interestingly, he also invokes the painter who put on spectacles in order to see the beloved’s face “with four eyes.” So perhaps the look evidently passing between the prince and the pir—or alternatively between the bearded man and a youth standing in the painting’s foreground and a similar pair seated in the garden—is meant to conjure up the painter’s visualization of an anticipated platonic rather than earthly encounter and relationship.

Be that as it may, the poem’s final couplet, written in two hemistitches at the painting’s top and bottom, confirms both that the lover is Sultan Ibrahim Mirza himself, using his pen name Jahi, and that notion of a nighttime banquet is a Sufi-inflected metaphor for the fulfillment of his heart’s desire:

After a thousand nights [now] that you have reached his banquet
It is a prize, Jahi, from him never remove your eyes.