AKM282.29, Princely Entertainment in a Garden, Folio from a manuscript of the Collected Works (Divan) of Sultan Ibrahim Mirza (fol. 29), Fol.29v 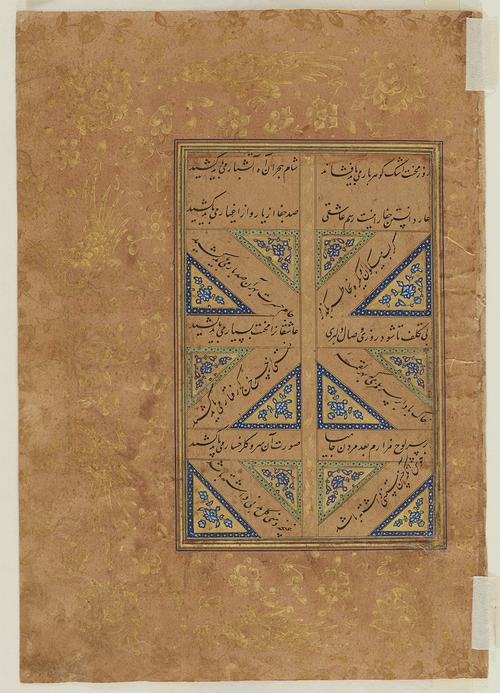 AKM282.29, Princely Entertainment in a Garden, Folio from a manuscript of the Collected Works (Divan) of Sultan Ibrahim Mirza (fol. 29), Fol.29r 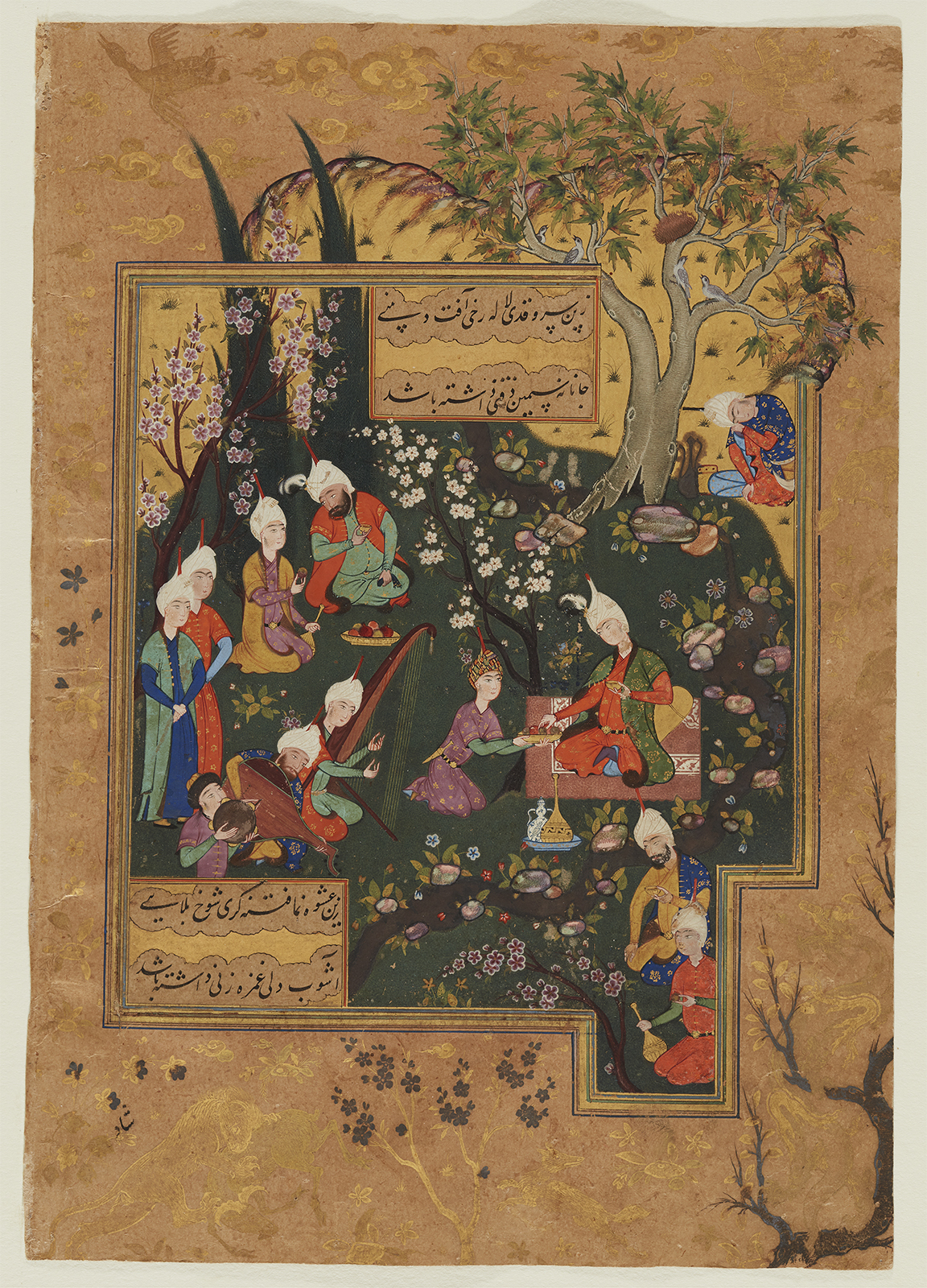 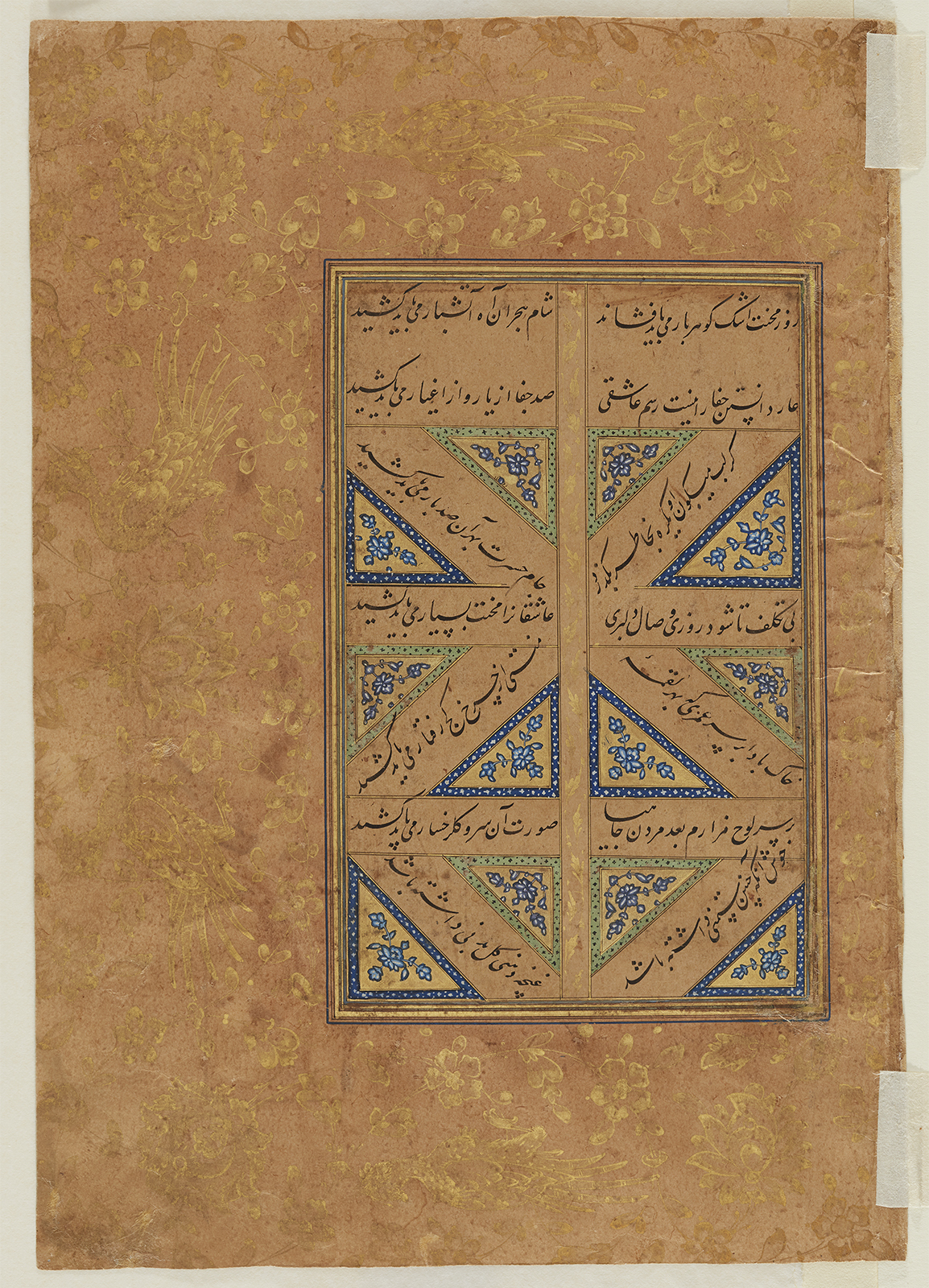 Princely Entertainment in a Garden

Folio from a manuscript of the Collected Works (Divan) of Sultan Ibrahim Mirza (fol. 29)

The composition’s principal figure is the young and beautifully-attired prince seated cross-legged on a folded carpet alongside a winding stream.[1] He holds a small gold wine cup in his left hand and reaches out to take a piece of fruit from the servant kneeling in front. A trio of musicians provide entertainment—one plays a tambourine, another an oud or lute, and the third a chang or harp. Various young servants and older, bearded courtiers also seem to be listening to and enjoying the music, although the lad underneath the plane tree seems to have already grown tired of the festivities and has fallen asleep.

Whatever their role, the participants in this outdoor fête are stylishly attired and all except the tambourine player wear the typical Safavid turban, consisting of cloth, sometimes shot with gold, wrapped around a cap with a projecting red baton called a taj. Somewhat more distinctive is the multi-coloured headgear of the servant offering the fruit bowl, while the prince’s turban, along with that of the rather rotund bearded courtier to the left side, is decorated with gold chains and turban pins fitted with a tall plume (from either an eagle or owl) and feather brush.

Sultan Ibrahim Mirza’s poems, authored under the pen name of Jahi, belong to a genre of “realist” poetry that developed in Iran during the 16th-century (see AKM282.1). Unlike Persian poets of previous eras, whose love imagery was infused with often complex mystical meaning, Safavid writers concentrated on the expression of actual human emotions in colloquial language. For instance, the ghazal or amatory poem that this painting accompanies refers quite directly to both the physical and sexual attributes of the individual (evidently a male) whom Jahi desires and just as directly to his despair that person would have no interest in someone like him. In fact, Jahi describes himself as having become majnun, that is, having lost his mind, knowing that he will never possess his heart’s desire. In correlating such sentiments with the bazm illustration here, one could infer that the prince on the seated carpet is either the one whom Jahi characterizes at the start of his poem as a “jasmine . . . in possession of a blossom-like mouth [and] flower-like body” or at the end of the poem as mad. The painting thus anticipated the manuscript’s fifth illustration of “Majnun in the wilderness” (see AKM282.36).

Notes
[1]. The stream, along with other details in the painting and in the margins, was originally silver, now oxidized with age.