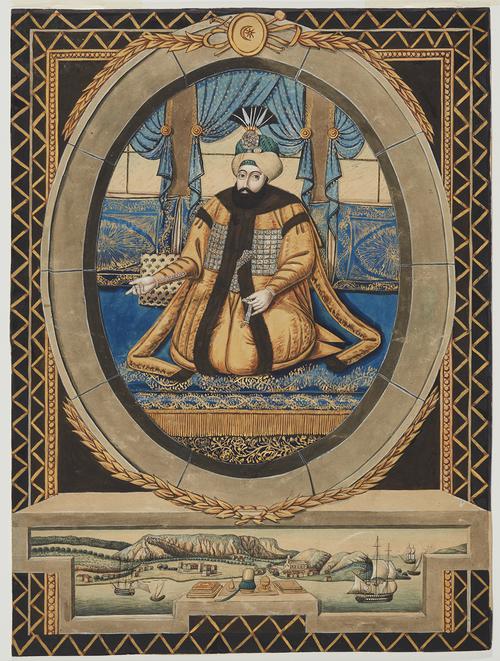 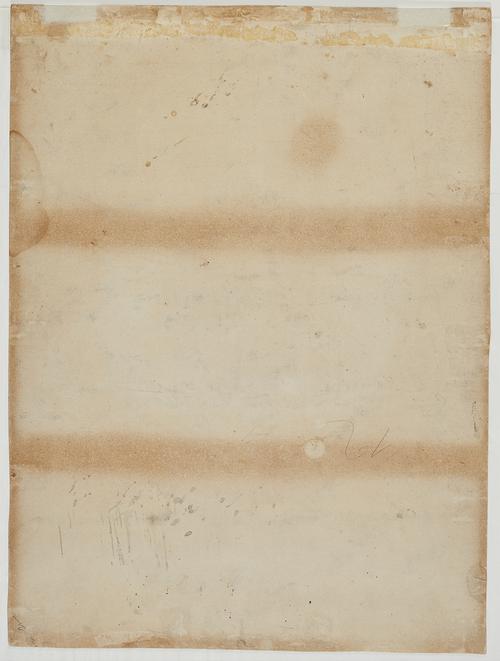 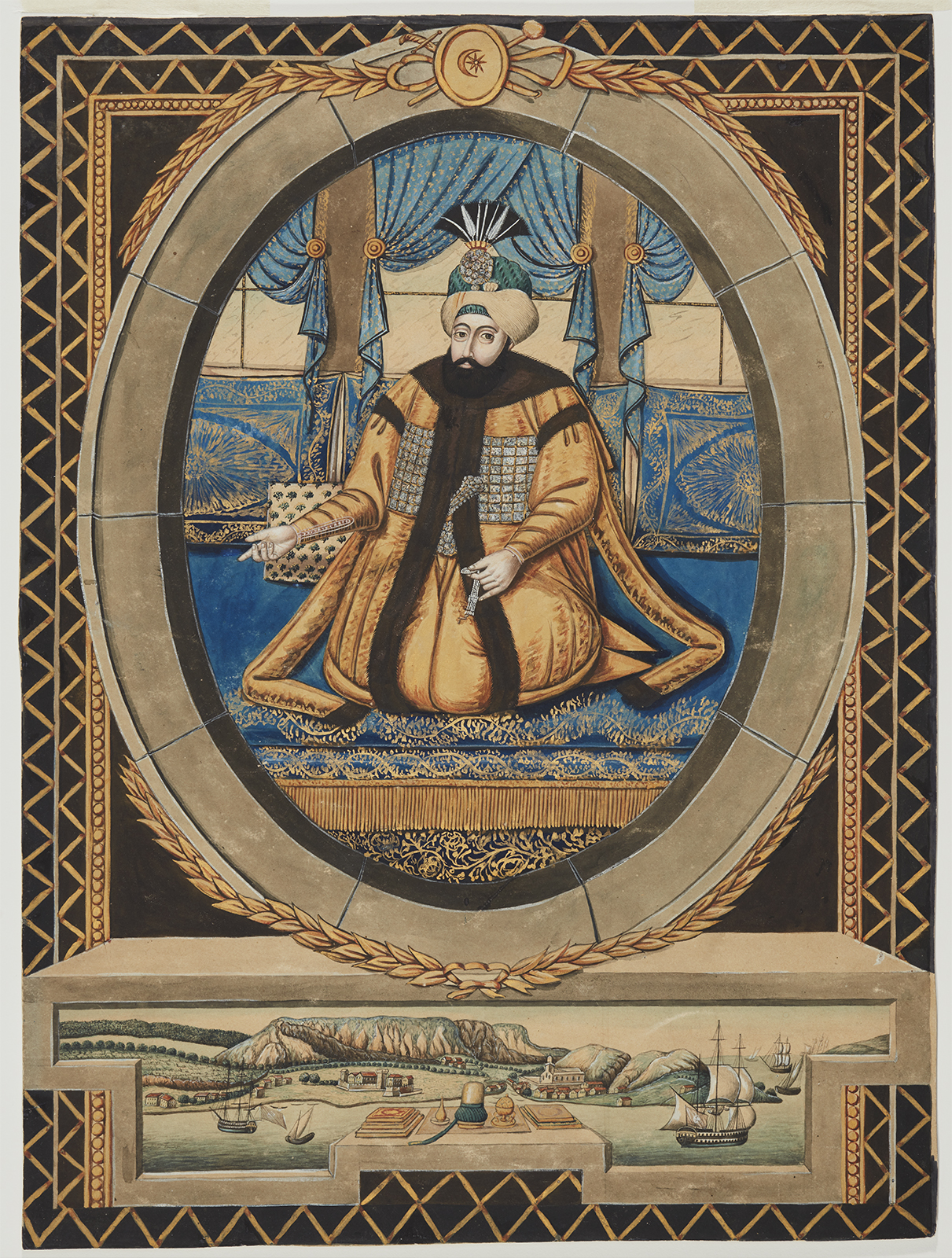 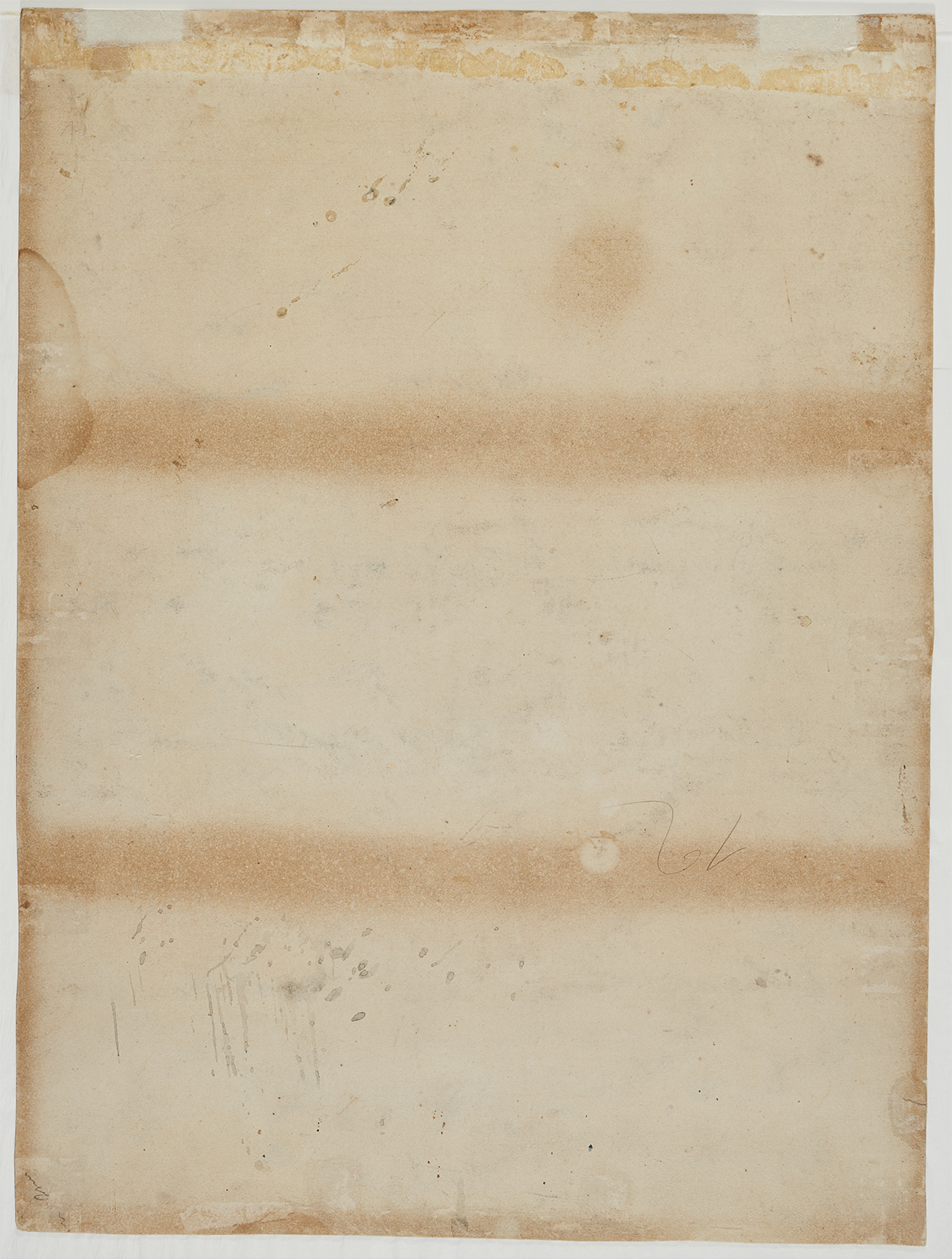 In this portrait, the sultan is dressed lavishly. He is wearing a golden cloak lined with black fur in which is tucked a gem-encrusted scabbard. He holds a diamond watch in his left hand, and a gem headpiece fastens a black and grey aigrette to Selim’s green turban. The opulent interior in the background consists of blue and gold curtains, embroidered pillows in the same colour scheme, and a black carpet trimmed with gold fringe.

Sultan Selim III ascended the throne during a tumultuous period, a time when the Ottoman Empire was at war with the Austro-Hungarian Habsburg Empire as well as with Russia.[2] After the signing of peace treaties in the early 1790s, Sultan Selim III ushered in an overhaul of the military, administrative, and economic sectors of his empire, otherwise known as “The New Order” (Nizam-i Cedid).[3] These radical new measures became a key part of Selim’s imperial legacy, as the lower register of the painting affirms. There, a scene of ships at sea and architectural complexes set the foot of a mountain range are depicted. The buildings may perhaps represent new army barracks commissioned by Selim, while the nearby vessels may refer to the Sultan’s interest in international trade.[4]

At the top centre of the oval frame, a small golden medallion encloses a crescent moon with a star nestled in its inner arch. The crescent moon and star emblem became widely used in Ottoman lands during the mid-19th century, as evidenced by standards and banners.[5] Selim III (r. 1789–1807) was the first Ottoman ruler to adopt this symbol in official Ottoman insignia.[6] Moreover, in 1799, he established the Order of the Crescent, which honoured foreigners who distinguished themselves while fighting for the Ottoman Empire.[7] Eventually, the moon and star motif became the national emblem of modern-day Turkey, where it ornaments the country’s national flag.[8]

In the 19th century, official portraits of Ottoman rulers displayed elements of European painting, such as the wreath enveloping the oval frame of the portrait of Selim III, as well as the double fretwork in the background.[9] These particular features can also be seen in a portrait of Suleyman I from the Harvard Art Museums.[10] Like the painting in the Aga Khan Museum Collection, this portrait of Suleyman depicts the sultan seated in a lavish interior within a medallion frame that has been set above a landscape scene of ships at sea.

Selim III also commissioned British artist John Young (1755–1825) to create a collection of prints of Ottoman imperial portraits, A Series of Portraits of the Emperors of Turkey, published in 1815. A number of these later prints closely echo the medallion format of the portrait in the Aga Khan Museum Collection (a format also chosen for a watercolour portrait held in the Victoria and Albert Museum Collection)[11]. In contrast to these portraits, John Young’s portrait series are mezzotints, or coloured prints. The print medium allowed for the wide dissemination of Ottoman imperial portraits abroad as part of 19th-century practices of diplomatic exchange.[12]