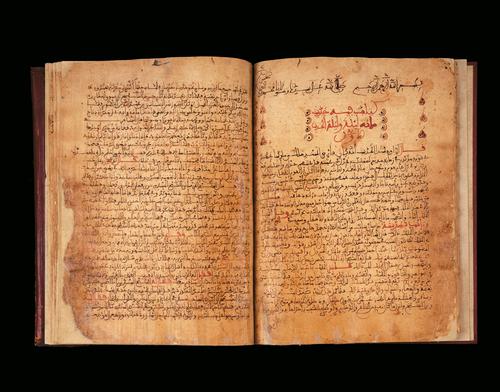 AKM513, Manuscripts of Mi'a layla wa layla and Kitab al-Jaghrafiya (One Hundred and One Nights and the Book of Geography)

One Hundred and One Nights and the Book of Geography

This manuscript contains the earliest extant copy of al-Zuhri’s Book of Geography, followed by one of the earliest versions of the famous stories of the Abbasid caliph Harun al-Rashid, A Thousand and One Nights, thought to have been adapted from a Persian source. The Book of Geography was written as a companion for a map of the world commissioned by the Abbasid caliph al-Ma'mun. It provides a description of the world at the time, including important new information about trade routes and commodities traded in the western Islamic lands and sub-Saharan Africa, as well as about the expansion of Islam. The second oldest copy is housed in the Bibliothèque Nationale, Paris, and is dated 1410 CE. The version of the Thousand and One Nights in this text is written in maghribi script and entitled A Hundred and One Nights, establishing its antiquity within the larger “Nights” tradition.