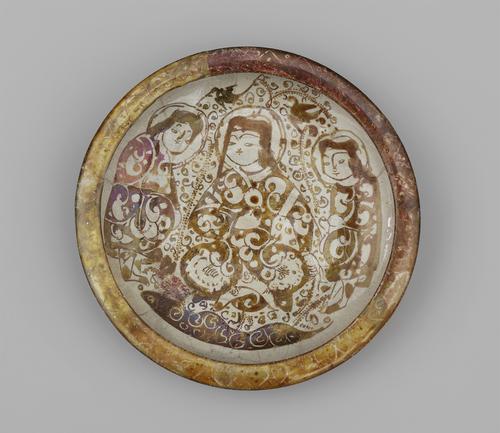 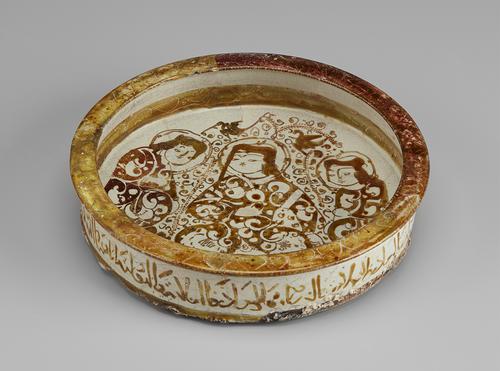 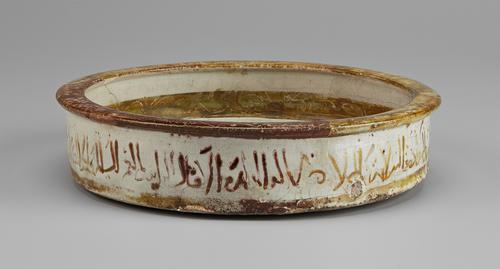 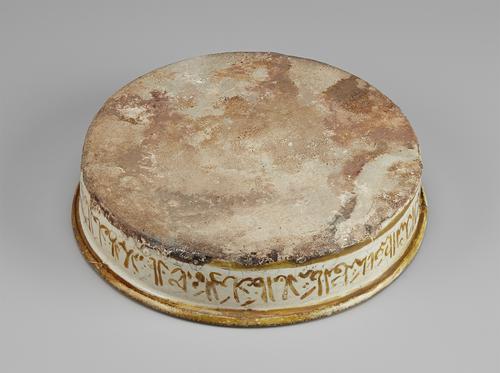 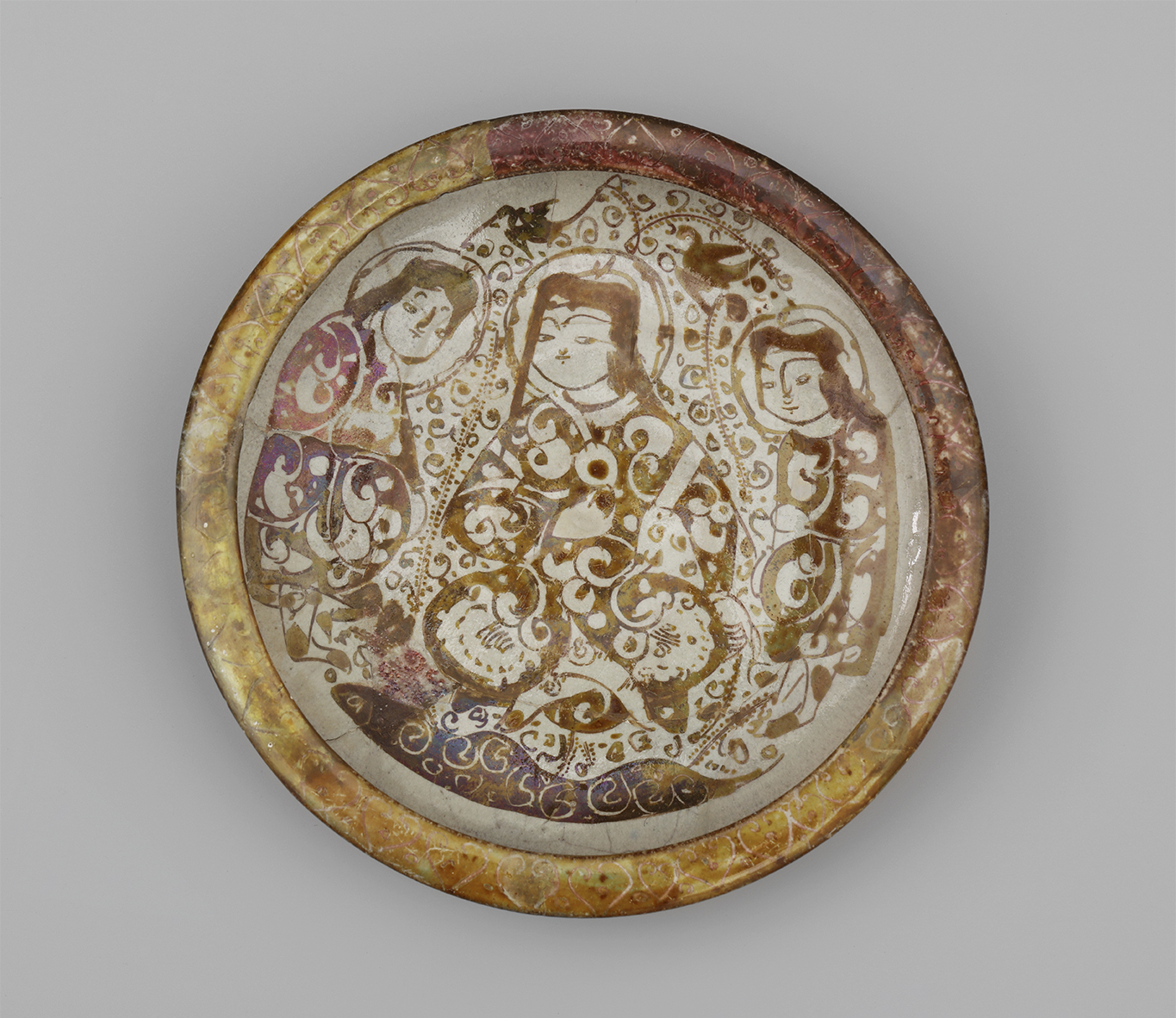 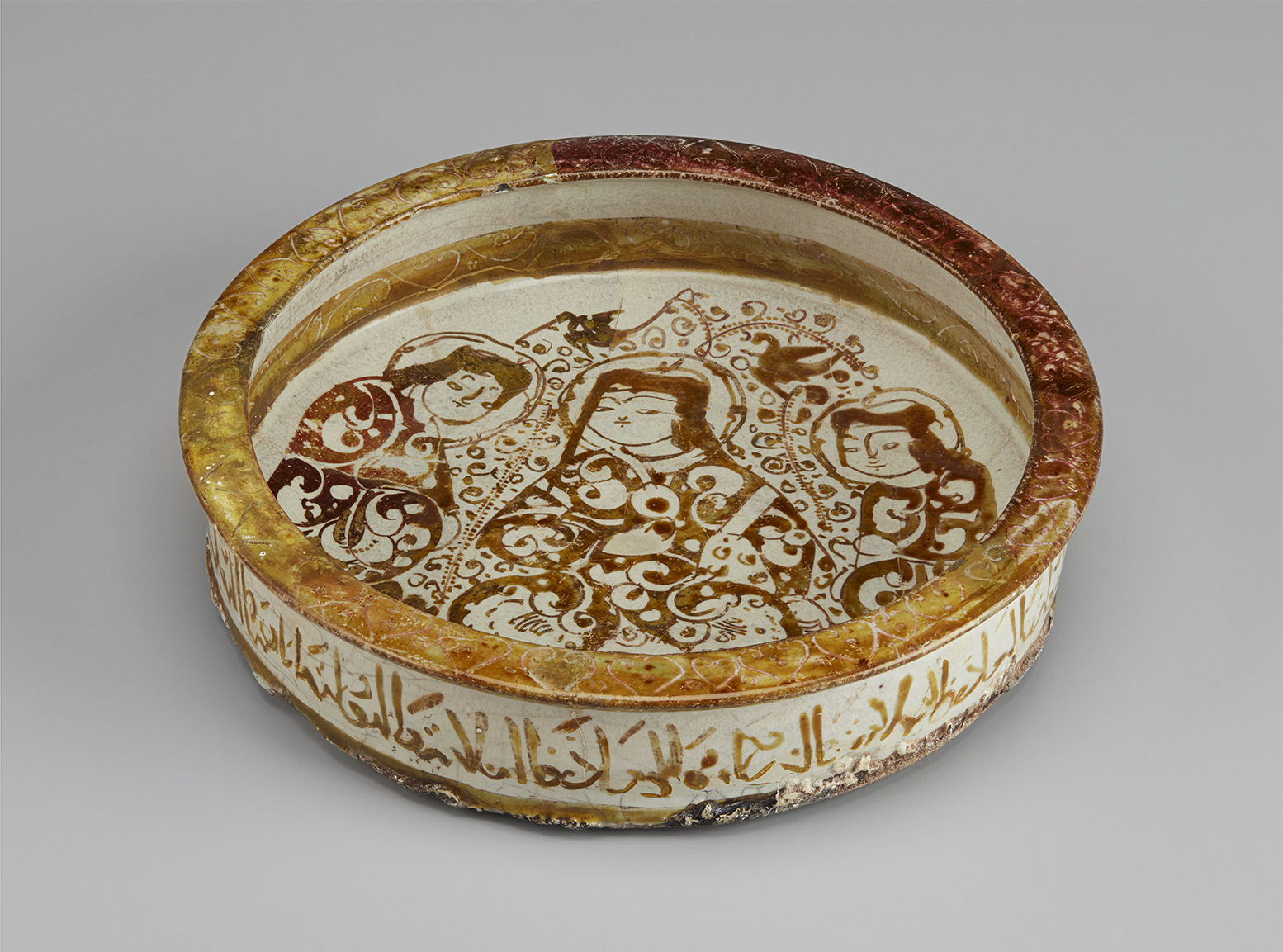 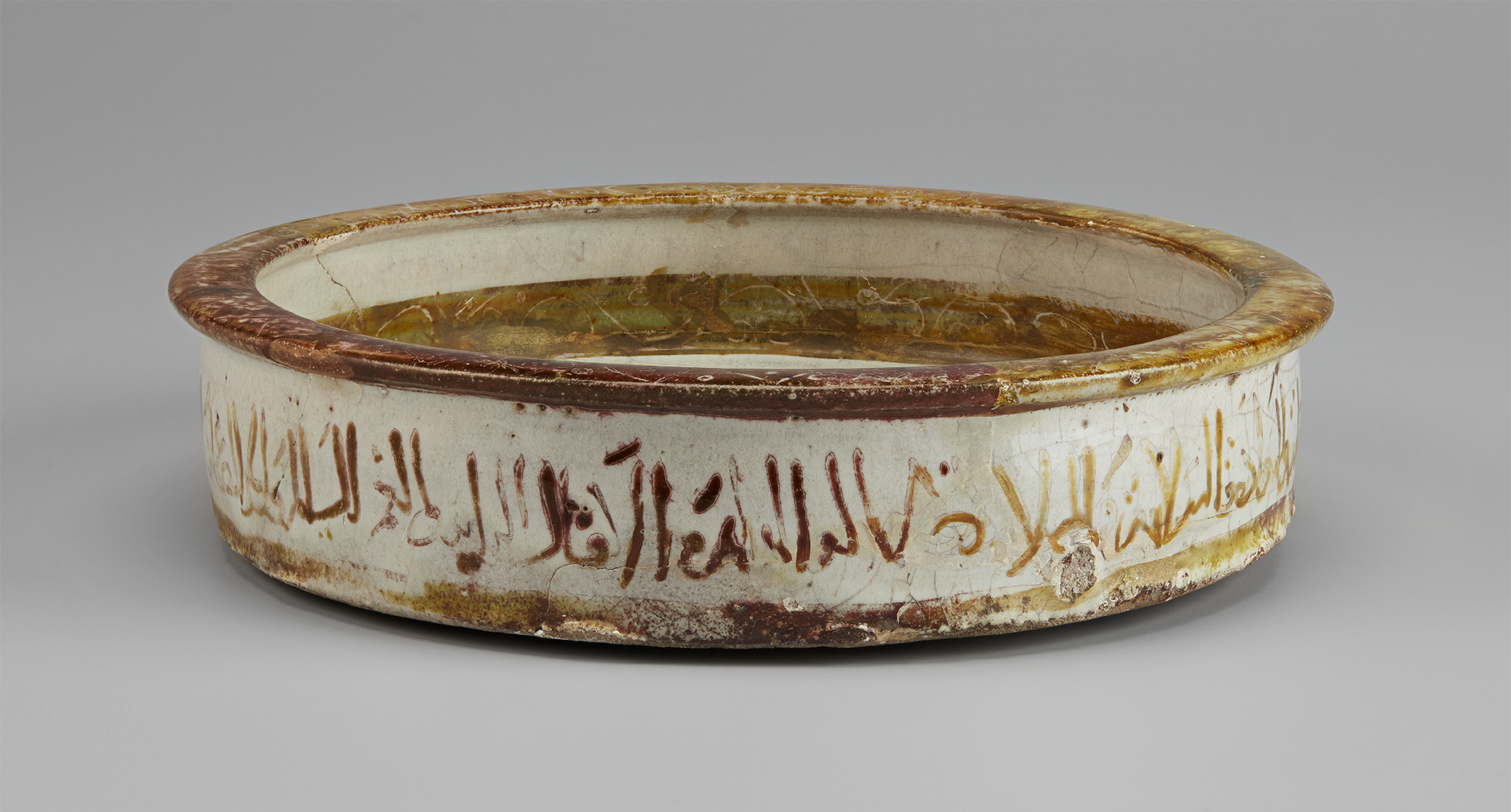 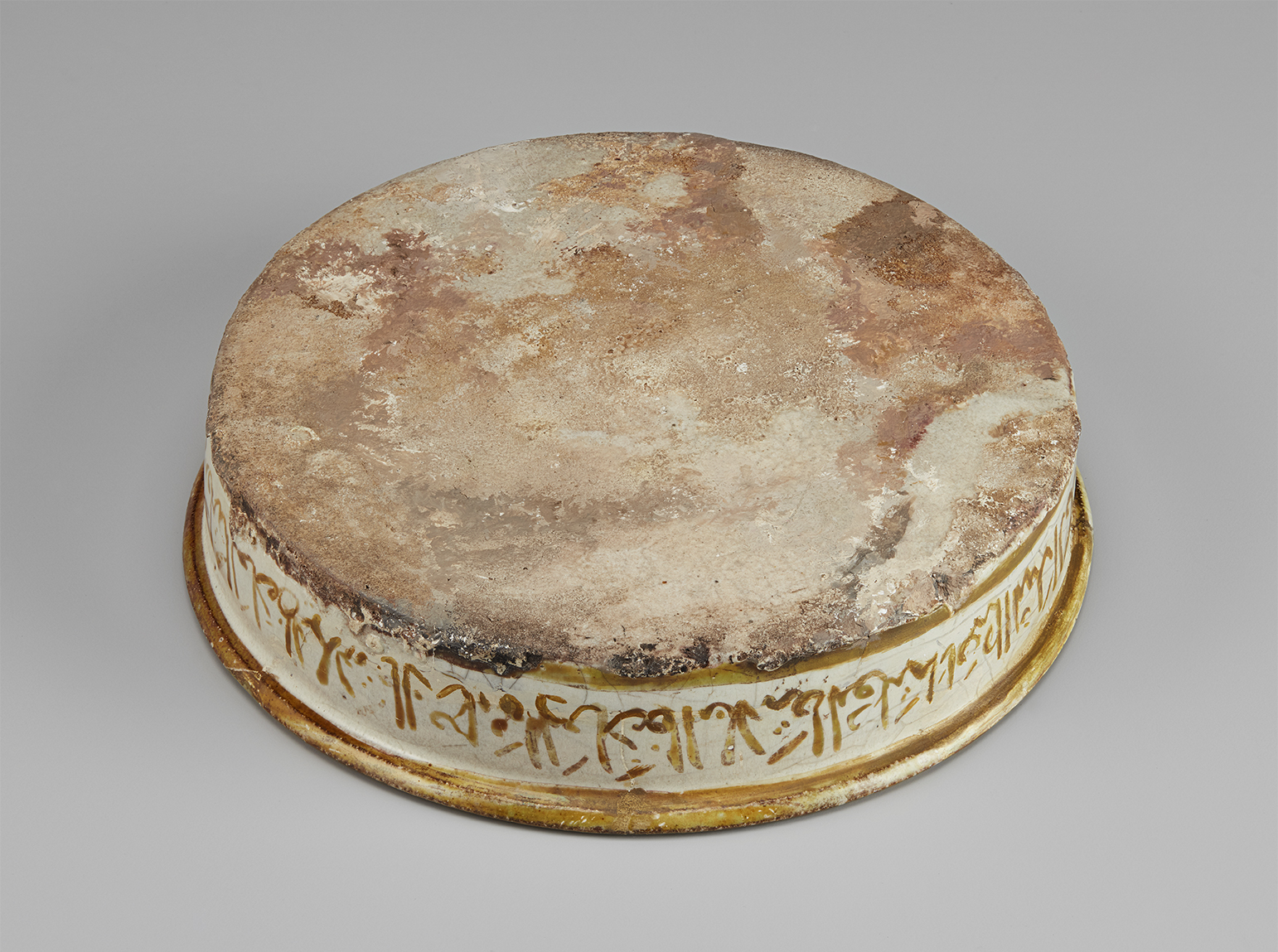 Kashan fritware often depicted scenes of elite leisure activities such as hunting, feasting, and dancing.[3] This bowl is no exception: its interior features a seated female figure accompanied by two attendants on either side. She is holding a cup in her left hand, and the scene is set against a background of scrolling vines and flying birds, perhaps invoking a garden space. This scene may allude to a social gathering during which attendees would enjoy courtly pursuits, such as partaking in a feast, perhaps accompanied by a musical performance or a poetry recitation.

Such activities constituted one component of the medieval Persian conception of courtly enjoyment, called “feasting and fighting” or bazm wa razm.[4] Representations of this concept often included images of figures on horseback (see AKM555) as well as illustrations of feasts featuring seated figures holding cups or other vessels (see AKM763). Similar iconography can also be found on various media from the same period, such as the paintings in copies of the Shahnameh (Book of Kings), one of the most popular illustrated manuscripts in late medieval and early modern Iran.[5]

On the exterior rim of this bowl is an inscription in naskh, or cursive script, painted in lustre over the white ceramic surface. Although the inscription is illegible, it may have followed the tradition of other Kashan wares by offering blessings to the object’s owner. These blessings may have been repeated invocations for happiness and safety (see AKM794), or poetic excerpts, such as the verses included on a dish [6] at the Metropolitan Museum of Art, in New York.

Lustre painting first emerged in Iraq in the 9th century.[7] Used for ceramic decoration, lustre paint was made by compounding metal oxides to create bright yellows and browns. Before the paints’ application, the vessel in question would have already gone through the process of a first firing, through which the ceramic body was hardened.[8] The lustre would have then been applied, followed by a second firing to fix the colour onto the ceramic surface.[9]

In the 12th and 13th centuries, this particular method of ceramic production and painting was introduced to cities in Iran, such as Rayy, and Kashan, where this dish in the Aga Khan Museum Collection is thought to have been produced.[10] The painted composition on this bowl is achieved by selectively applying lustre to demarcate the outlines of the seated figures at the centre, as well as the undulating lines of the vegetal motifs and the inscription on the outer edge. The remaining sections of the vessel are left blank, exposing the white fritware surface.

The three figures’ rounded facial features (including their almond-shaped eyes and arched, narrow eyebrows) are common to a genre of portraiture referred to as “moon-face” (mah-ruy), which was considered to embody the epitome of beauty.[11] Often linked to literature, depictions of “moon-faced” figures abound in medieval Persian art, including illustrated manuscripts, ceramics, and metalwork.[12] The ability of this lustre-painted dish to catch and reflect light may also allude to the moon’s light-emitting properties.[13]