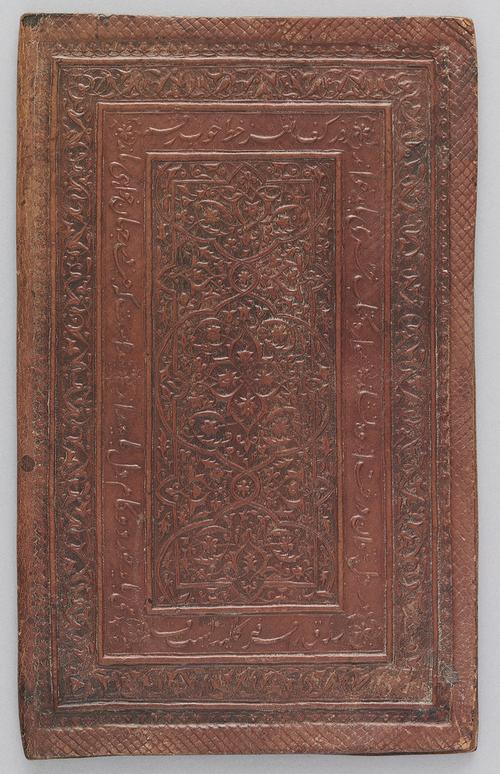 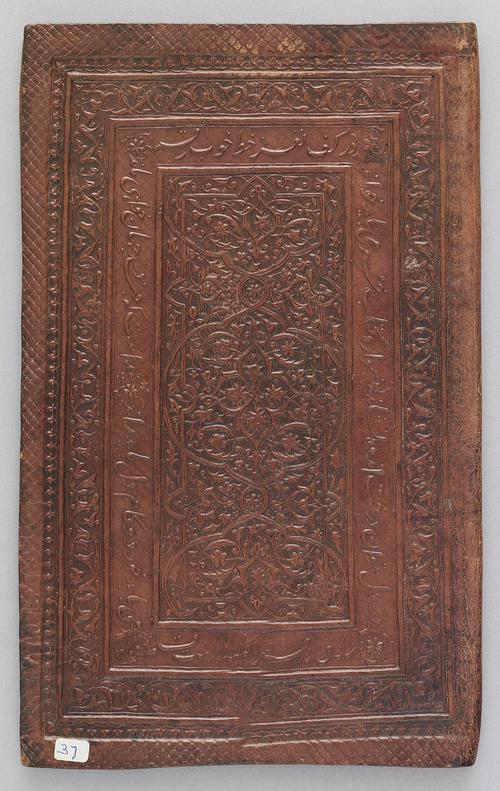 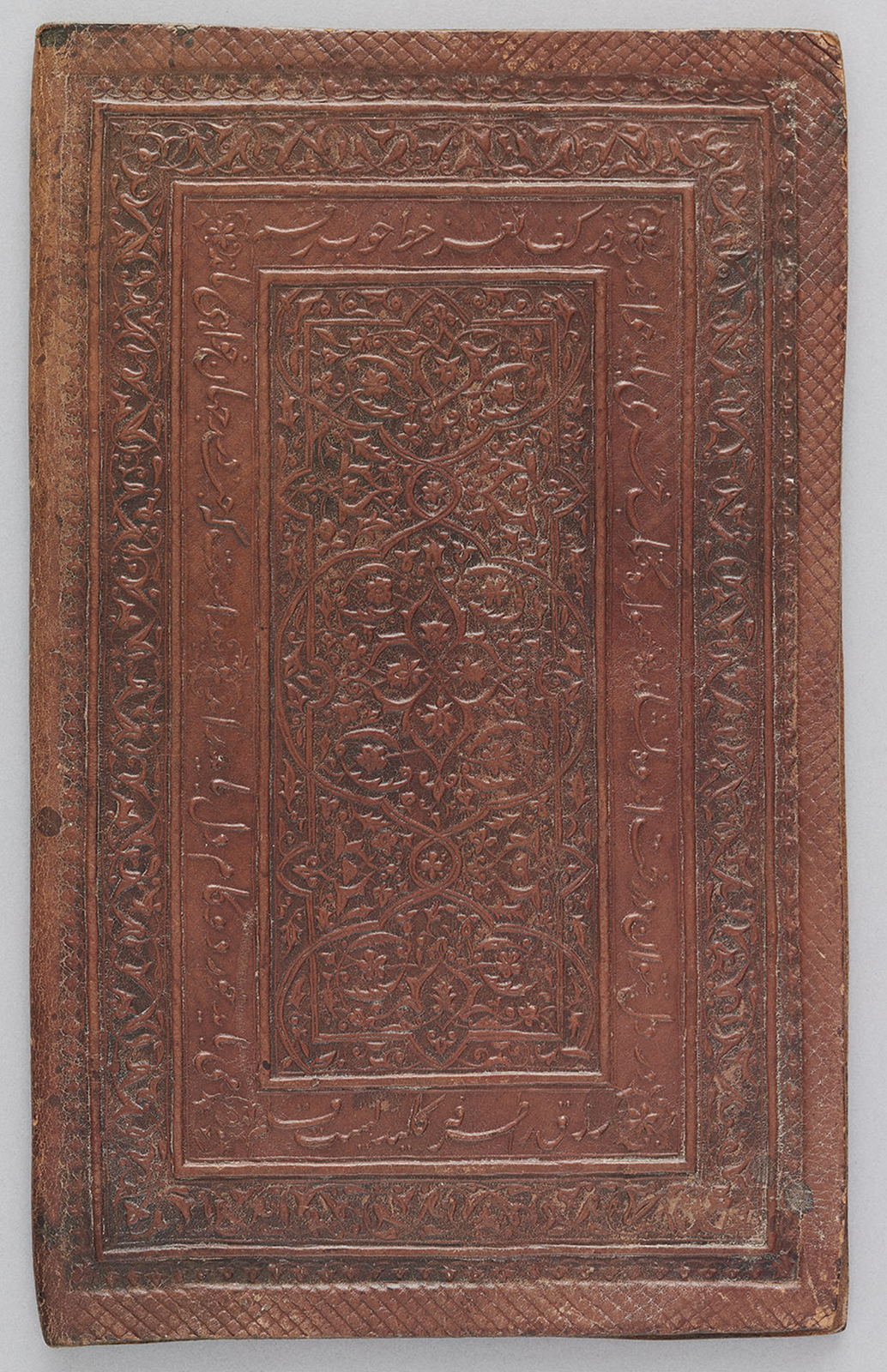 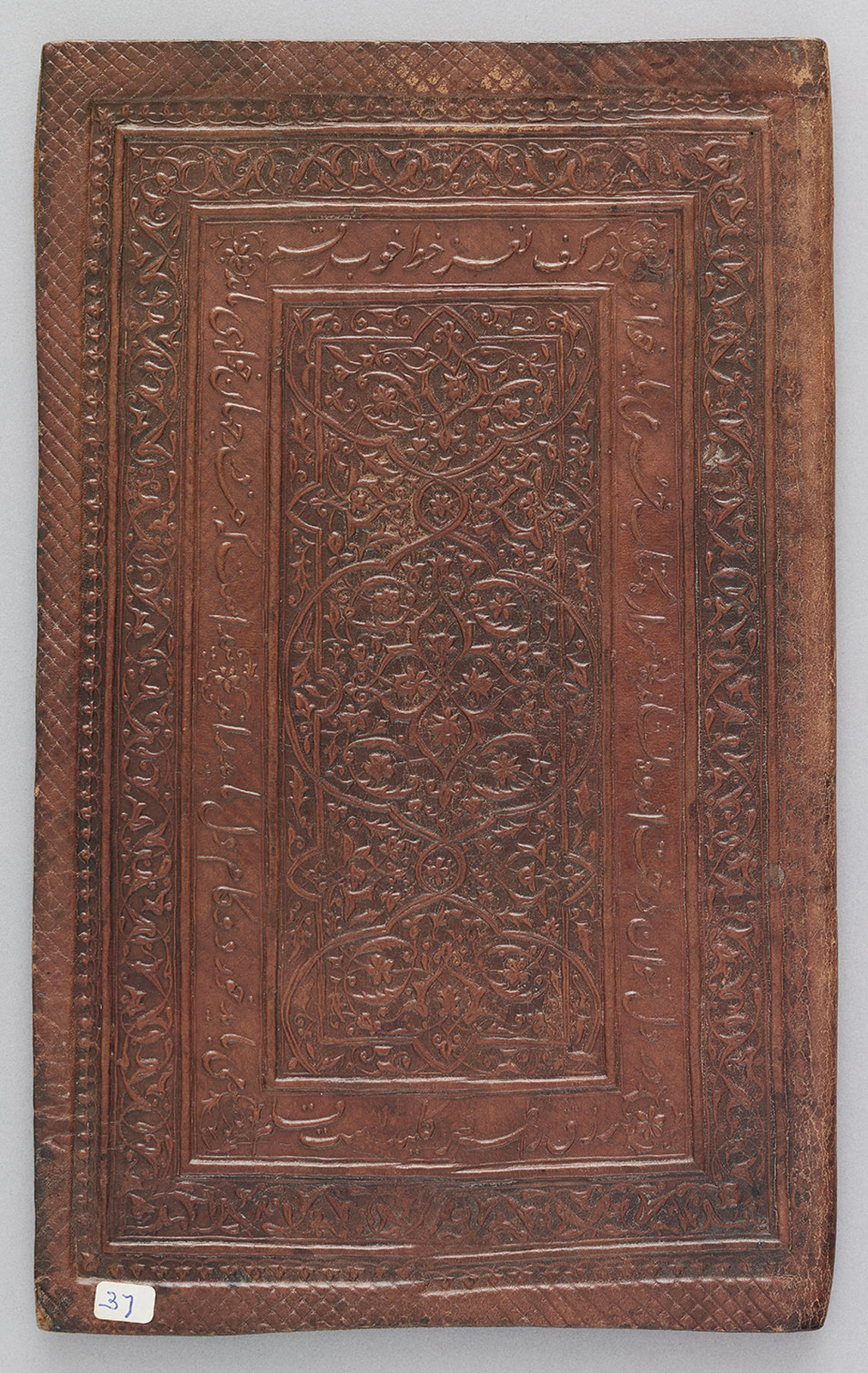 These leather folios in the Aga Khan Museum Collection belong to a cilbend or ciltbend, an Arabic term meaning a document case that in Turkish was used to mean a kind of document folder until the early 20th century. The folios were made using a metal or leather stamp with an engraved design. This type of folio involves covering a pasteboard skeleton with very fine shaved leather. The stamp is heated and then applied to the leather with the help of a press, leaving a raised design on the leather.

The design on both folios is identical. The main field is filled with a tiered central composition, with alternating leaf-like (rumi) and stylized composite flower motifs on the lower level. The spaces between these motifs are filled with radiating branches, leaves, and flowers. The second level of decoration consists of a narrow band that forms a rectangular area, with outward and inward projections at intervals. Over this is a third level of decoration consisting of a lobed medallion that encircles the central composition and is linked to lobed medallions above and below. Around the central field is an inner border containing a verse inscription in taliq script that starts at the top and continues anticlockwise. The inscription is written as a single line along the short sides and two lines along the long sides.

Along the upper and lower parts of this border are single lines taken from the Subhat al-abrar, a work in the masnavi form by Iranian poet Jami (d. 1492):
Above: Der-kef-i nağz-ı hat-ı hûb-rakam (The master of calligraphy in one hand)

Below: Rızk-râ turfe kilîdîst kalem (The pen is a key that opens the door to the necessities of life)

Left: Mey bâyed hord u kâm-ı dil bâyed rând / Peydâst ki çend der cihân hâhî mând
(Is it certain how long you will remain in this world? / So you should drink wine and enjoy the pleasures of the heart.)
There are rosette flowers in three corners of the inner border and the date 1233 (1817–18) in the lower left corner. Since the letter lam is equivalent to the number three in gematric chronograms, the two numbers following the number 12 are replaced by two lams instead of 33, giving the date 1233. The broad border around this is decorated with rows of leaf-like (rumi) motifs, the next narrow border with rows of tiny palmettes and the outermost broad border with a repeated geometrical pattern. Apart from the outermost border, whose geometrical pattern is tooled, all the decoration has been made by a block stamp made by a skilled binder. The artist who has drawn the template for the binder’s stamp was evidently inspired by the decoration on bindings and illumination produced in Herat in the late 15th-century Timurid or Shaybanid period and by bindings produced at the court art studio in Istanbul in the early 16th century.[6] Consequently, the closest example is the cover decoration of the unpublished leather binding of the Divan of Shaybak Khan dating from the early 16th century.[7]

The practice of using the letter lam on a leather folder to write the date of production is not unique to AKM1006. It can be found in three examples sharing a decorative scheme and bearing dates between 1815 and 1822.[8] In one example, the name of the binder has been written in the form Ası Ahmed Şaşı b. Şeyh Ali Karataşı. Although AKM1006 does not share this decorative scheme, it must be the work either of the binder Ası Ahmed, who made the other three leather folders, or of his assistant.