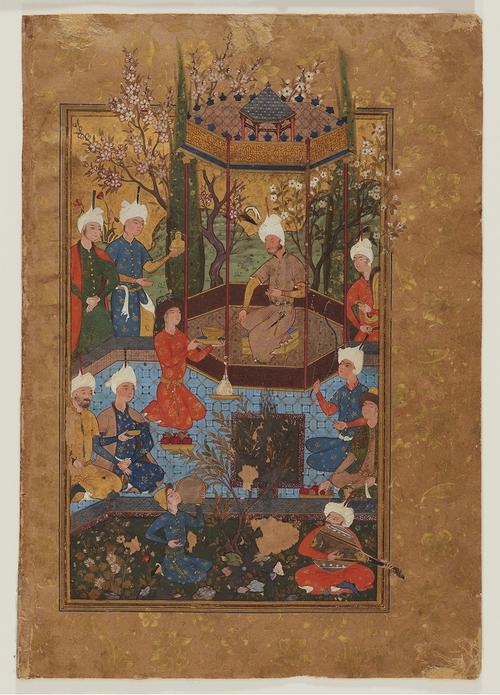 AKM282.86, Folio from a double-page finispiece, Folio from a manuscript of the Collected Works (Divan) of Sultan Ibrahim Mirza (fol. 86), Fol.86v 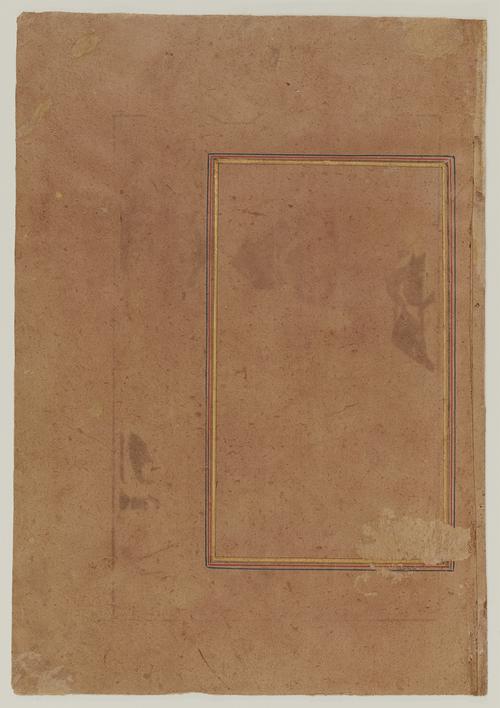 AKM282.86, Folio from a double-page finispiece, Folio from a manuscript of the Collected Works (Divan) of Sultan Ibrahim Mirza (fol. 86), Fol.86r 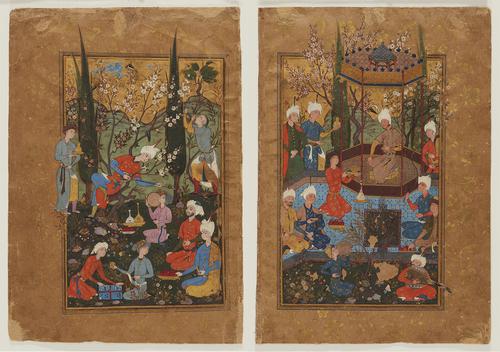 AKM282.86, Folio from a double-page finispiece, Folio from a manuscript of the Collected Works (Divan) of Sultan Ibrahim Mirza (fol. 86), Fol.86v-87r 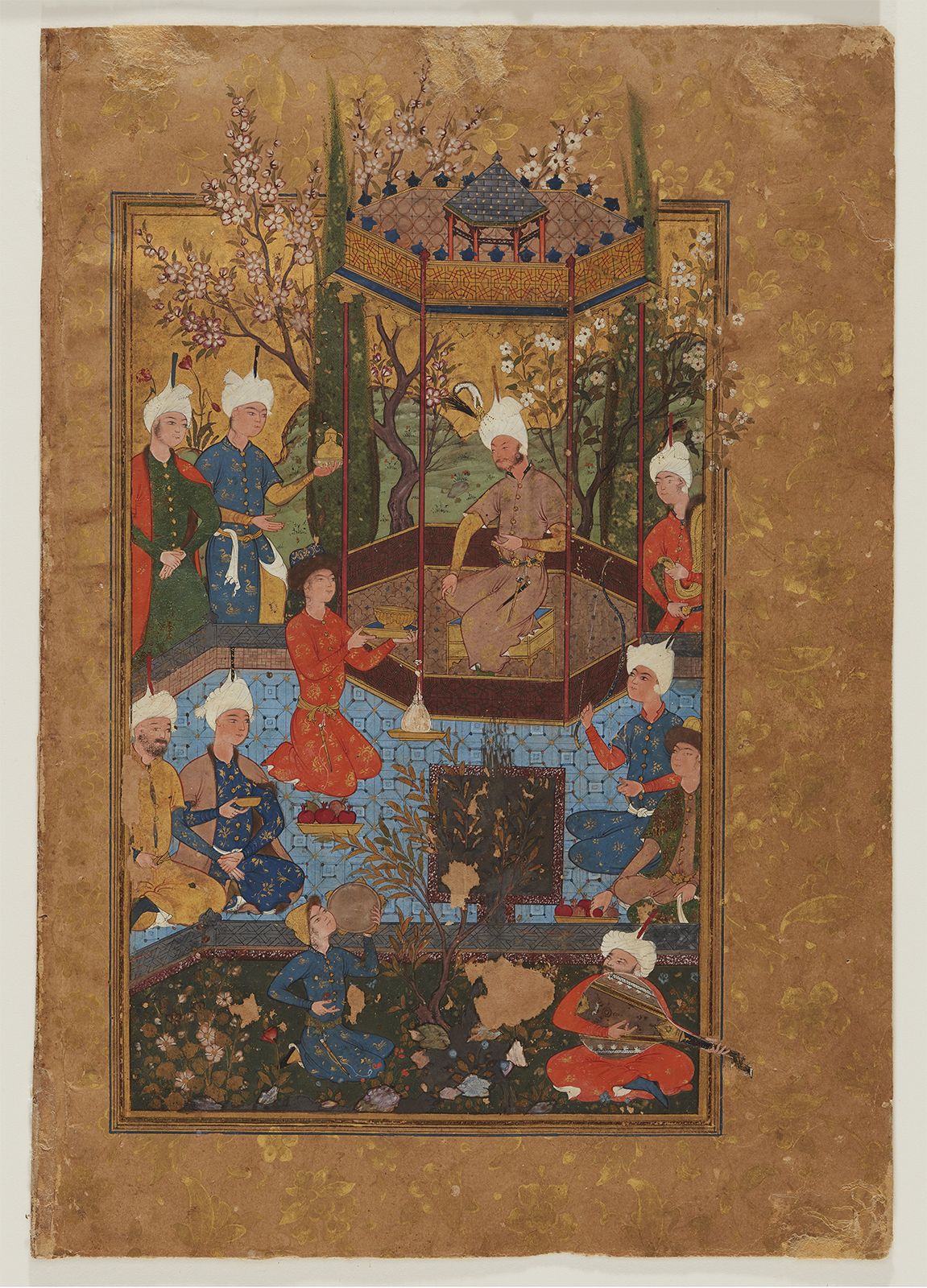 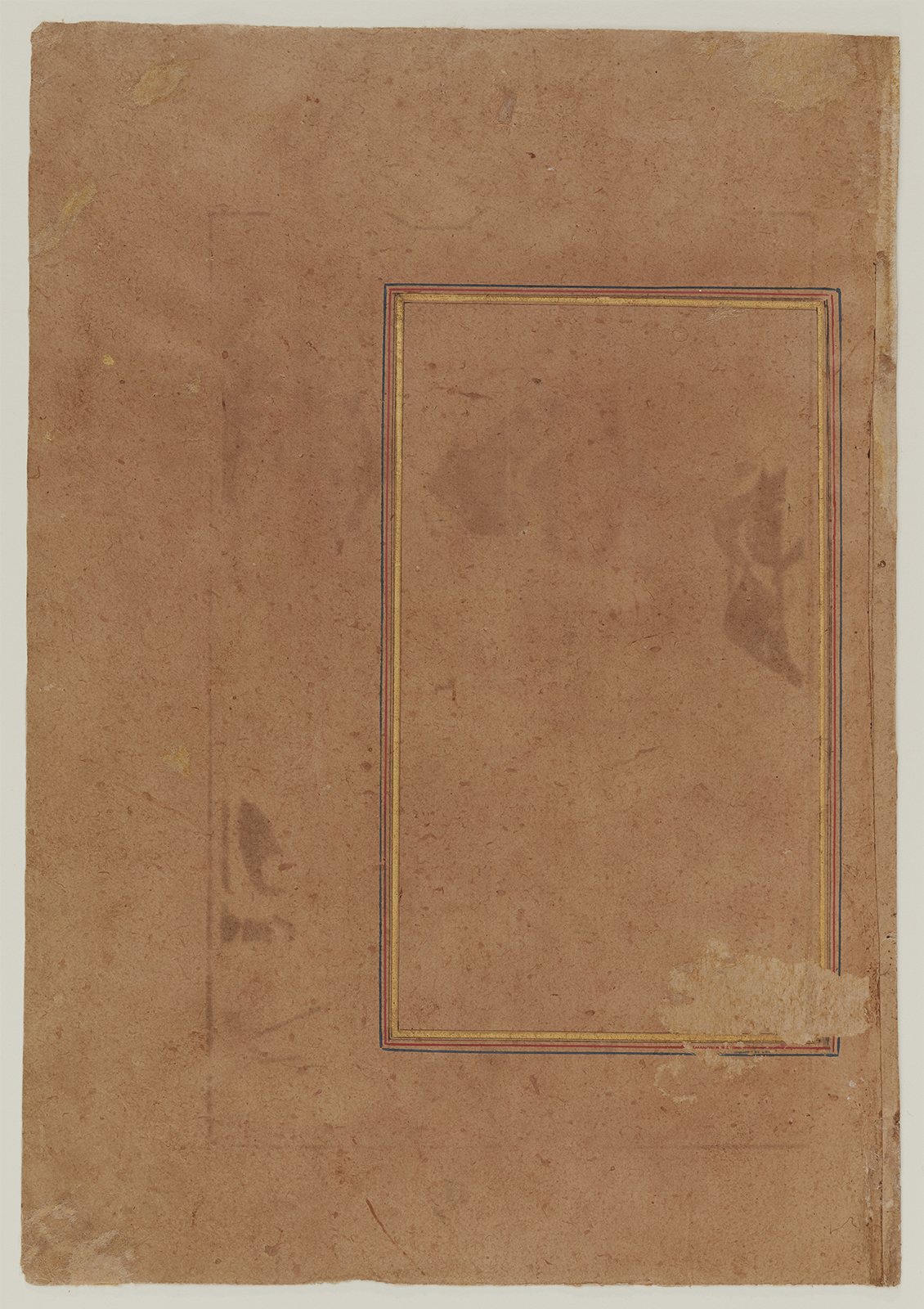 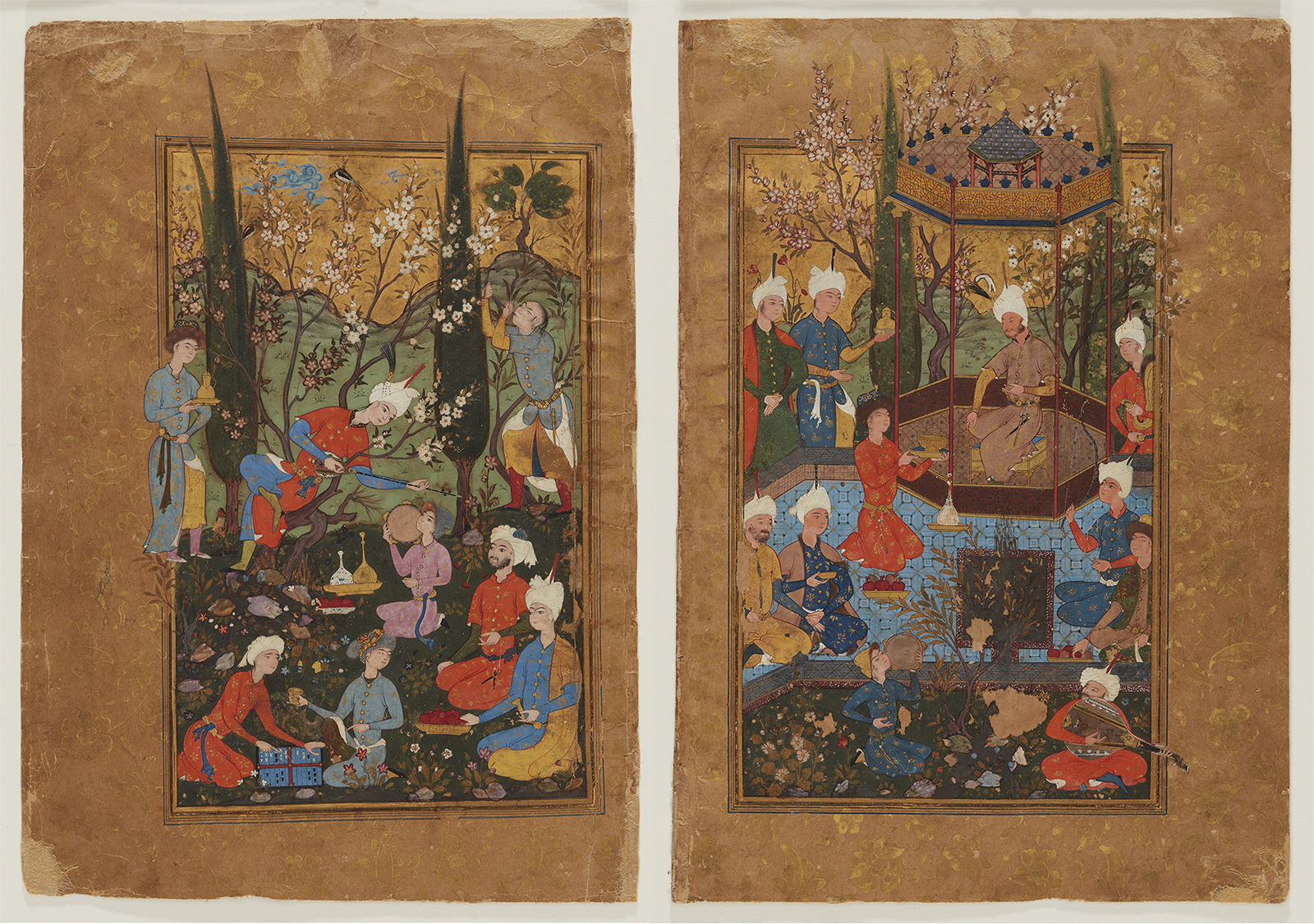 Folio from a double-page finispiece

Folio from a manuscript of the Collected Works (Divan) of Sultan Ibrahim Mirza (fol. 86)

In AKM282.86 (Folio 86v), as is typical of such scenes, the most important person, here bearded and wearing an elaborately-adorned turban, is seated on the right side, inside a tall, hexagonal pavilion above a square fountain on an open, blue-tiled terrace. He is attended by courtiers, by servants offering food and drink, and by musicians performing on the grass below.

In AKM282.87 (Folio 87r), the party continues on the painting’s left side, where a youth, also of princely mien and attire, leans against a flowering tree and strums a stringed sitar, while additional courtiers enjoy the music, a servant walks in carrying a jug or pitcher, two boys play a game of backgammon, and another youth aims a blowpipe at a bird perched on an upper tree branch.[1] The numerous glass, gold and blue and white vessels for pomegranates and libations placed throughout the painting further attest to the festive nature of this gathering.

Scholars have long associated this outdoor fete with the Divan’s author, Sultan Ibrahim Mirza,and identified the principle character seated in the pavilion as the prince himself.[2] AKM282 was actually compiled five years after his death by assassination, so his representation here would be an idealized portrait, as well as a fitting pictorial tribute to his memory (see AKM282.1 and AKM282.2). And although the painting definitely subscribes to traditional bazm scenes, certain details suggest other levels of meaning.

Particularly noteworthy is the game of backgammon in the finispiece’s lower left corner. Like chess, backgammon long occupied an important place in Persian princely education and culture, along with horsemanship, playing musical instruments, and writing and reciting poetry.

More specifically, backgammon, played with dice, was considered analogous to the human life cycle, which is dominated and controlled by fate.3 Its depiction at the end of a posthumous copy of Sultan Ibrahim Mirza’s poems may refer both to the prince’s training as a youth (he was praised in his lifetime for his accomplishments in all the noble arts), and for the fate that eventually befell him. Such an interpretation may be underscored by the presence of the youth with the blowpipe obviously intent on striking a bird; an uncommon and unsettling motif that could be considered the equivalent of the snake in the garden of Eden.

While Sultan Ibrahim Mirza’s poems are characteristic of the “realist school” of Persian poetry developed in 16th-century Iran (see AKM282.1 and AKM282.2), the paintings in his Divan also reflect older themes of love and longing for union with God associated with Islamic mysticism or Sufism. Considering the finispiece painting from that cultural perspective, it is possible to interpret the man in the pavilion as a Sufi seeker for God’s truth and the beardless youth kneeling before him as the embodiment of divine beauty. Alternatively, the young man might represent a Sufi penitent seeking repentance or guidance from his spiritual master. Equally telling are the glances being exchanged by the two musicians on the left side of the scene: one of princely appearance in the tree playing the sitar and the other younger still on the ground holding his daf or tambourine. Within Sufism, the contemplation of the beloved is a metaphysical experience, known in Persian literature as shahid-bazi or the witnessing of divine presence in worldly manifestations. The significance of this trope would have been readily understood in 16th-century Iran and would have reinforced the painting’s allegorical meaning for contemporary viewers.[4]

Although the finispiece is iconographically and thematically appropriate for a copy of Sultan Ibrahim Mirza’s poems, it actually may not have been painted for this particular volume. The backside of the composition’s right half is blank AKM282.86 (folio 86r), whereas finispieces in other Safavid period manuscripts invariably contain text. In addition, that half and its facing mate have been glued onto other sheets of paper, making the folios much thicker than those in the rest of the manuscript, including the opening frontispiece. Furthermore, the gold margin illumination is quite different from that surrounding the volume’s six narrative paintings. It is likely, therefore, that, while typical of late 16th-century Safavid painting, this double-page bazm scene may have been inserted into the manuscript after 1582–3.

As for the finispiece’s painter, we know that ‘Abdullah Shirazi signed and dated the illustration on AKM282.23 (folio 23r) and may have been responsible for the manuscript’s other paintings. But certainly formal features here, such as the proportion of the figures, elongated fingers, protruding eyelids and minutely-brushed eyebrows, differ from ‘Abdullah’s style and point instead to the work of other Safavid court artists such as Shaykh Muhammad (see AKM497) and Mirza ‘Ali (see AKM163). [5]