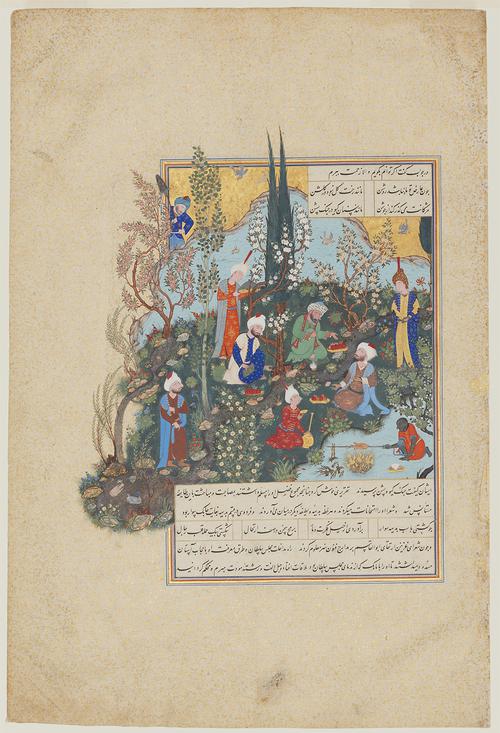 AKM156, Firdausi and the Three Poets of Ghazna, Front 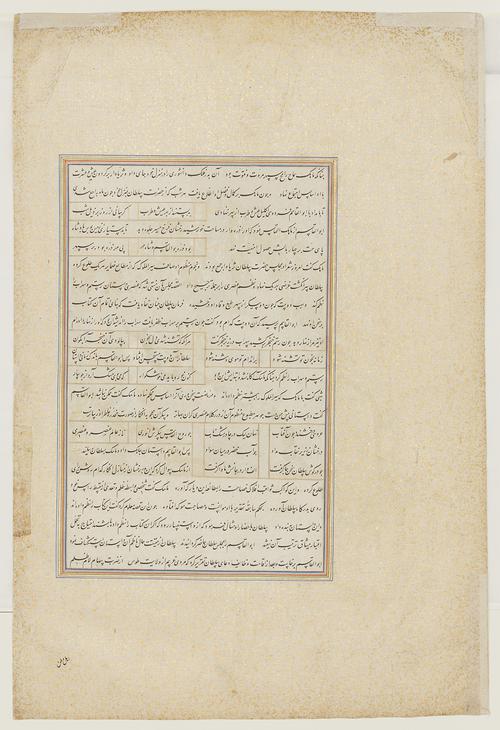 AKM156, Firdausi and the Three Poets of Ghazna, Back 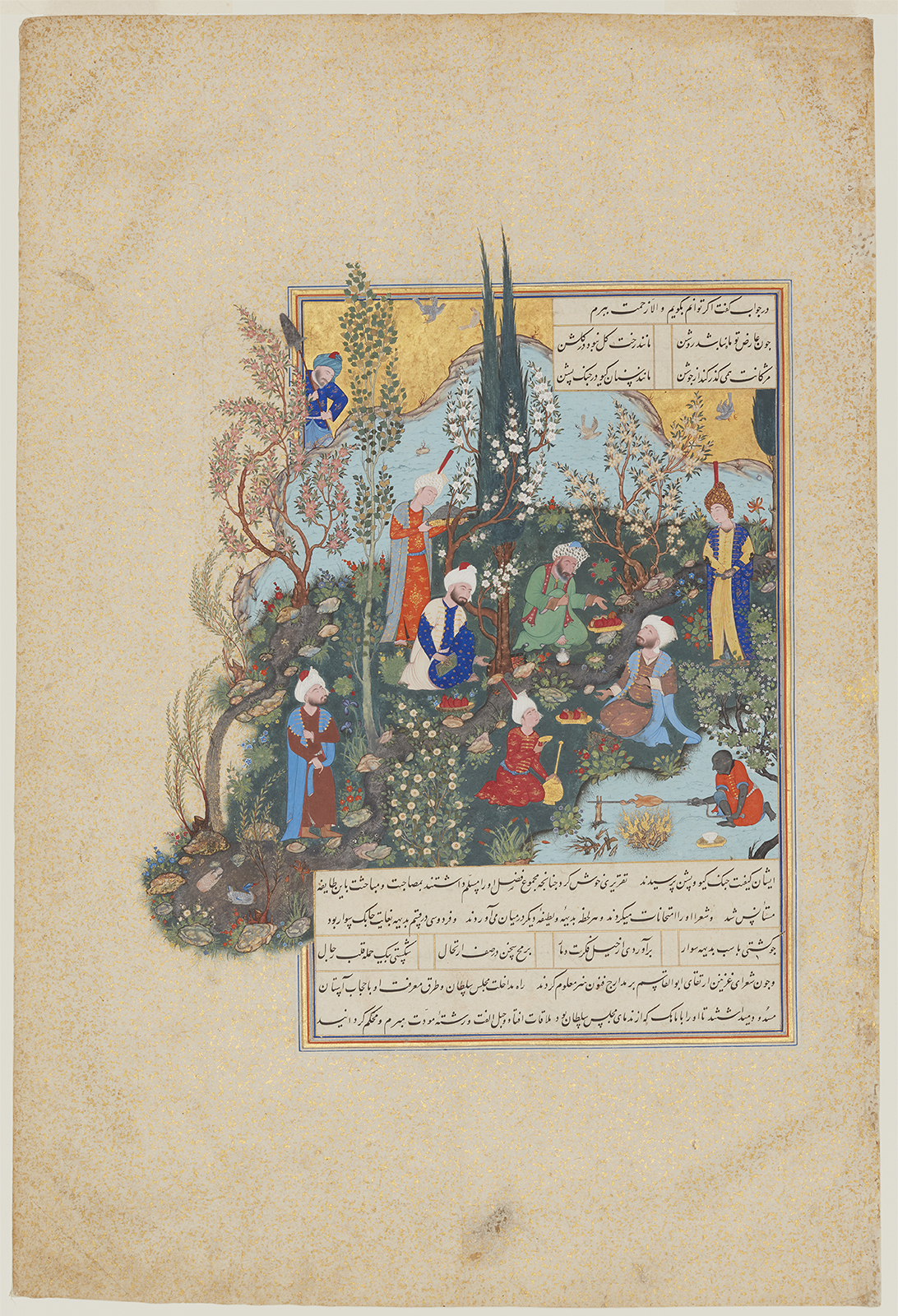 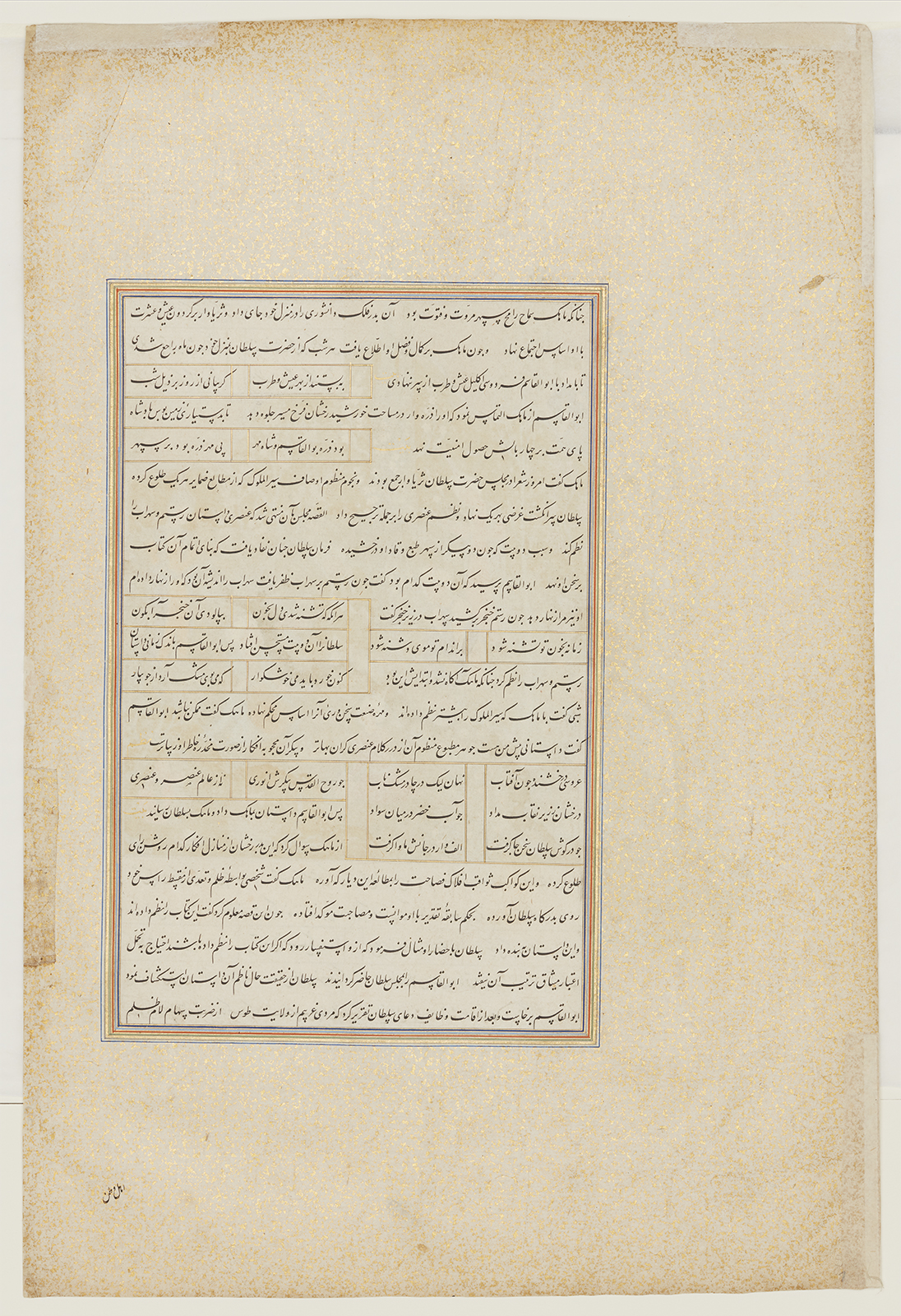 Firdausi and the three poets of Ghazna

The painting of Firdausi and the three poets of Ghazna depicts an encounter that occurred before Firdausi reached Sultan Mahmud’s court.[2] One of the sultan’s leading poets, ‘Unsuri, had invited two others, Farrukhi and Asjadi, to join him in celebrating his success in a poetry competition at a garden outside Ghazna. While they sat enjoying themselves, Firdausi entered the garden where he hoped to join the party. Two of the poets proposed insulting him so he would leave, but ‘Unsuri had a different plan. He told Firdausi that only poets could join the group. When Firdausi explained that he, too, was a poet, they set him a challenge. ‘Unsuri spoke one line of verse, which Farrukhi followed with another line in the same meter and rhyme, and then Asjadi composed the first half of a couplet which Firdausi completed with ease and erudition.[3] The poets had no choice but to admit him to their company.

The episode of Firdausi and the three poets also appears in an earlier preface (see AKM88), indicating its significant role in explaining the context in which Firdausi presented his unfinished epic to Sultan Mahmud. In this folio, the three bearded poets are seated on either side of a stream, once silver and now tarnished to black, while Firdausi stands at the left of the composition, observing. A beardless youth stands behind one of the poets with a covered platter, while a kneeling pageboy prepares to offer a cup of wine to the poet in a blue cloak. As a farmer with a spade observes the scene from the horizon, a servant turns a bird on a spit over a fire in the foreground and a young man in a yellow robe stands, hands on belt, to the right of the group. This figure may be an idealized portrait of the young Shah Tahmasp, who would have been about 18 years old when this painting was completed.[4]

The painting has been attributed to Aqa Mirak,[5] thought to have been the third supervisor of the Shahnameh project and a companion of Shah Tahmasp. This attribution is primarily based on three stylistic features: the painting’s composition, constructed on a diagonal arc; the robust scale of the figures; and the glorious representation of flowering plants and trees with undulating branches. Mirak would certainly have been privileged to contribute the first painting in the manuscript in a section that most likely was added, along with an illuminated frontispiece (folios 2v and 3r) and another illustration (folio 10r), later than the illuminations and paintings that immediately follow, starting with folio 16r.[6] Not only does this work embody the style of the second generation of artists who worked on the Shahnameh of Shah Tahmasp, but also it heralds the greater naturalism and accurate depiction of the objects, flora and fauna that developed in Safavid painting in the 1530s and 40s.

Notes
[1] From 977 to 987 Firdausi received the support of a local benefactor in his home town of Tus in northeastern Iran, but after this patron’s death in 987, he fell on hard times. Despite Firdausi’s efforts to secure the patronage of Sultan Mahmud after his accession in 997, no payment was forthcoming. Nonetheless, the poet continued writing and finally completed the Shahnameh at the age of 70. He travelled to Ghazna to present the work in person to the sultan, who offered him such a derisory sum that Firdausi gave it away. Only after 15 years did one of Mahmud’s viziers convince him to change his mind and reward Firdausi richly, but as the Sultan’s caravan was entering Tus by one gate, the poet’s corpse was being carried out by another.
[2] Although J.V.S. Wilkinson and Laurence Binyon, 9, state that this episode does not appear in the earliest account of Firdausi’s life, presumably the earlier preface, the scene is illustrated in a dispersed Shahnameh of 1341, now in the Aga Khan Museum, AKM88. See Canby 1998, 24, no.3.
[3] The quatrain appears in the text block at the upper right of the painting.
[4] See Stuart Cary Welch, 43.
[5] See Dickson and Welch, vol. 1, 111.
[6] See Sheila R. Canby 2013, 329–33.