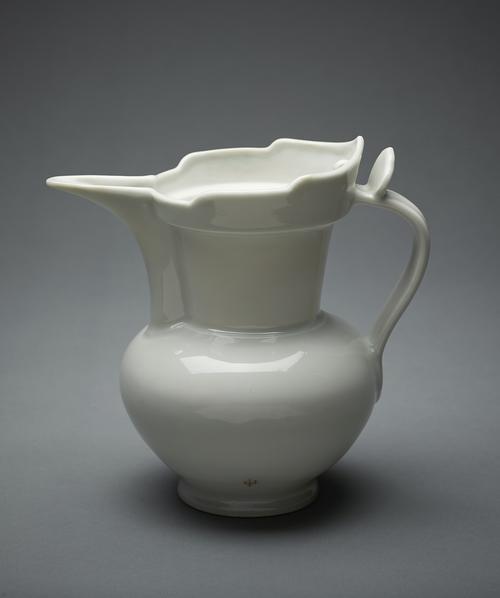 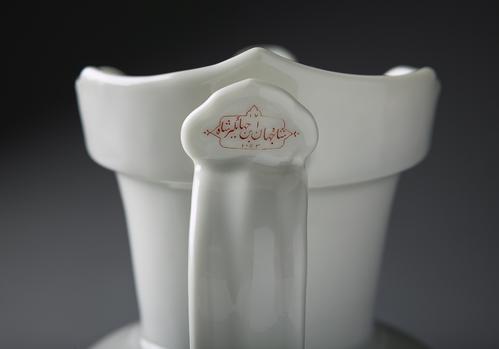 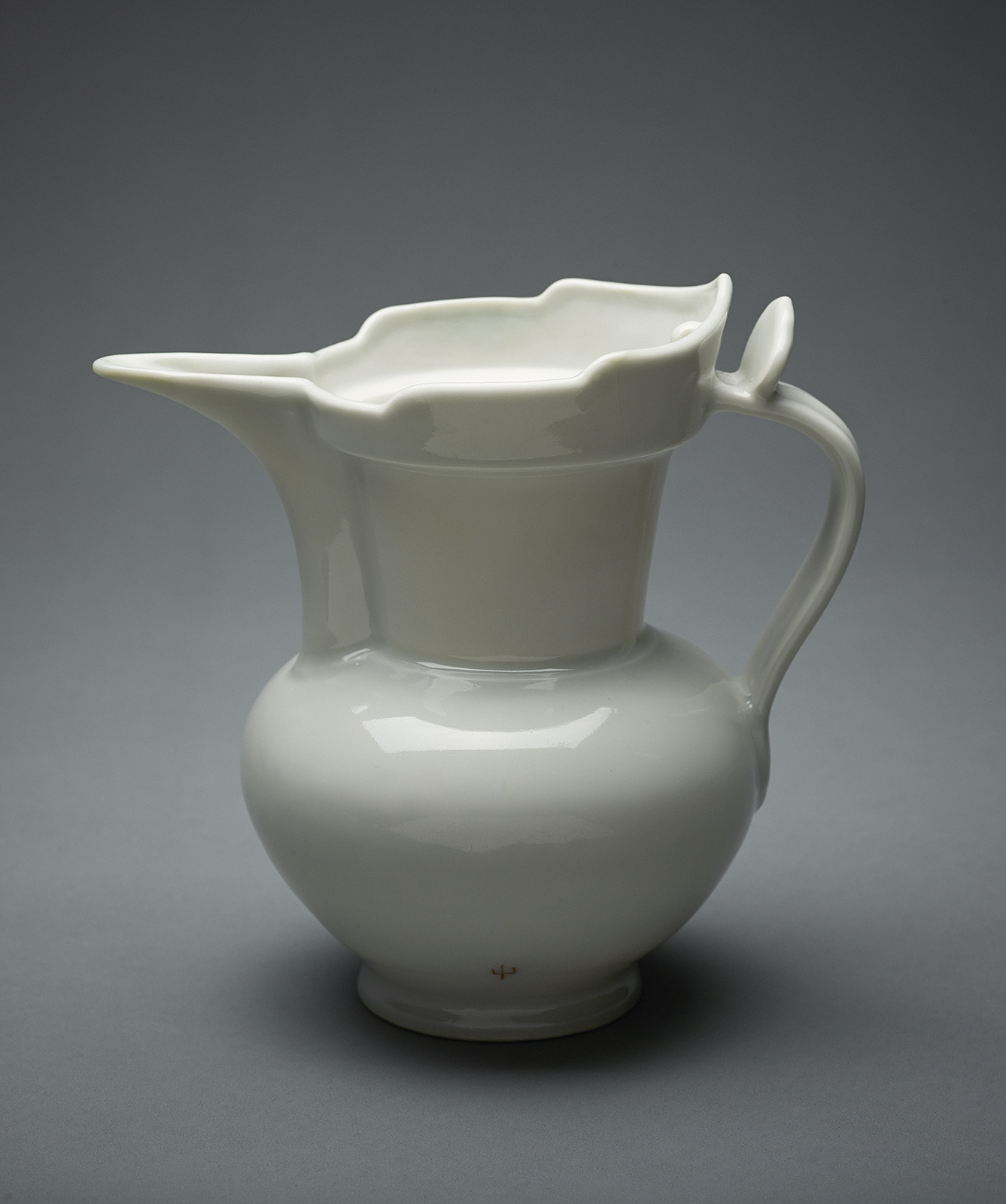 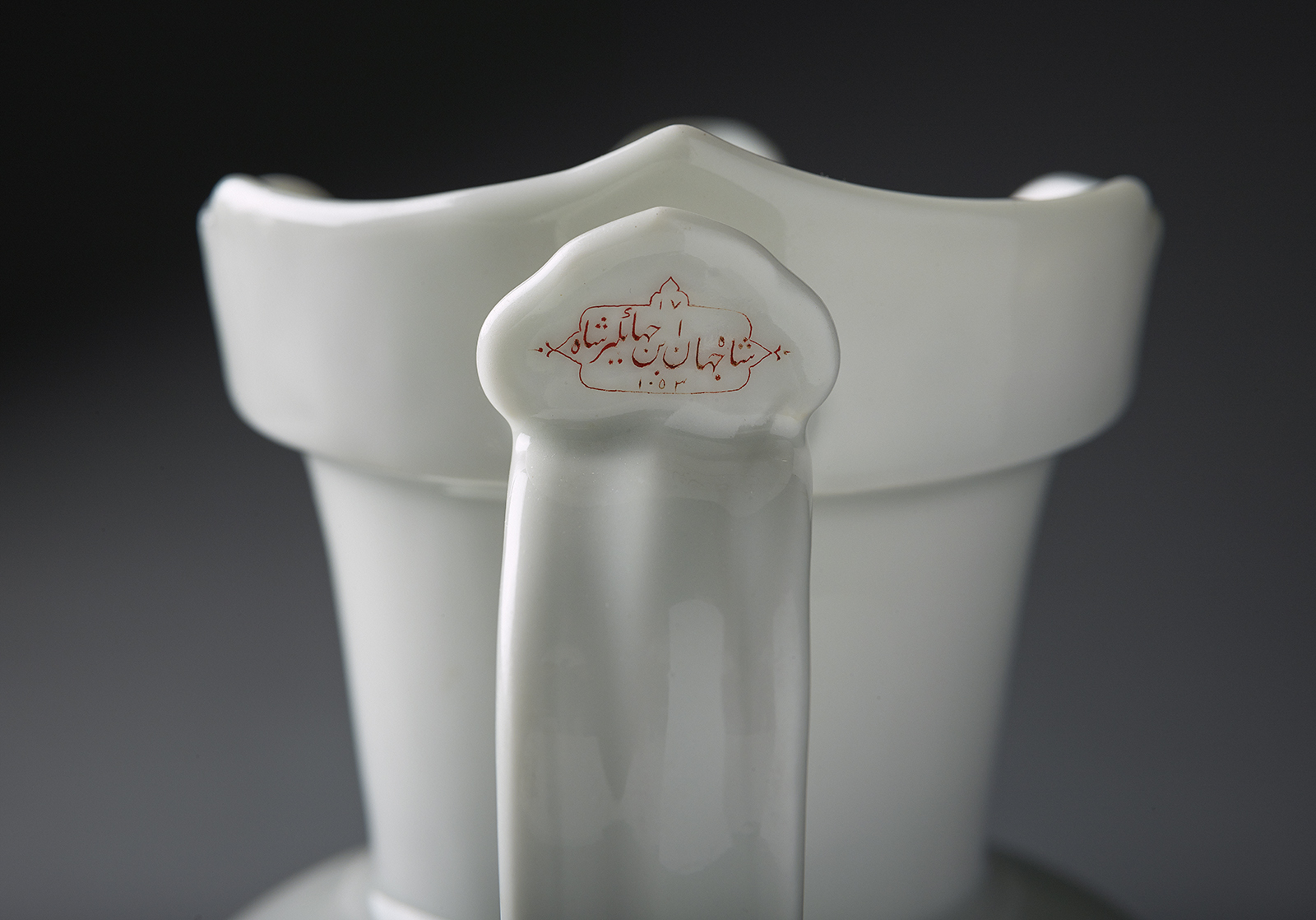 This form of ewer has a long history in Tibet—it was the shape of the vessels, typically metal or wooden, that were used during feasts and that might be displayed in front of Buddhist altars along with textiles and other offerings. When the form traveled to China, it was given the name “monk’s cap ewer” (sengmaohu) because it was thought to resemble the distinctive kind of hat worn by Tibetan monks. Because of that name, there has been some confusion about whether it was used in religious rituals, but that was most likely not the case.[2]
The Yongle ewers were on the move from the time they were made, and so it is not altogether unexpected that this one ended up in India, where, by the seventeenth century, it was in the collection of the Mughal emperor Shah Jahan (r. 1628-56). Following centuries of trade between China and South Asia, and an increase in the trade of ceramics in the 9th century, we have evidence that rulers in the region were assembling rather large and impressive collections of Chinese wares from at least the 15th century. Therefore, by the time the Mughal emperors came to power in northern India in 1526, it was not only a custom to collect porcelain in the Persian cultural sphere from which they had emerged, but it was also the custom in India, where the Mughals came to rule. [3]
There must once have been dozens of Chinese porcelains in the Mughal collections, where they were very highly valued. The emperor Jahangir (r. 1605-27), talks at one point in his memoirs about the rarity and quality of Chinese porcelains that he has been given presented as gifts, and says that he can distinguish porcelains from different parts of China. But out of this larger collection of Chinese objects in the Mughal treasury, only a select few were chosen to be engraved, including this ewer here. On the thumbrest is an inscription reading ‘shah jahan, son of jahangir, the emperor’, and a date, 1053 in the hijri calendar, that converts to 1643-44 CE. At least six other Chinese ceramics bear the name of Shah Jahan, giving some sense of the esteem in which he held these items, as well as his diverse tastes—these objects ranged from pictorial blue-and-whites to this rather subtle and refined form. (These objects are in the Asian Art Museum, San Francisco; Asia Society, New York; The Al Thani Collection, Doha; and Wallington House, Northumberland, England.) Furthermore, we note the Mughals were not simply acquiring newly made objects of high quality, but sought objects made centuries earlier and that must have been in prized collections from the time that they were made. This includes a platter once belonging to Mahin Banu, a princess of the Safavid dynasty who then donated it to a shrine in Mashhad, Iran, an illustrious history that would only have enhanced its value at the Mughal court.[4]