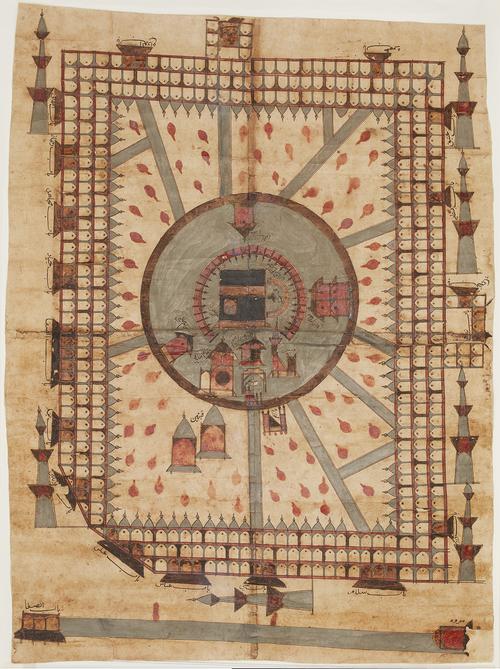 AKM529, Depiction of the Masjid al-Haram (Holy Sanctuary) at Mecca 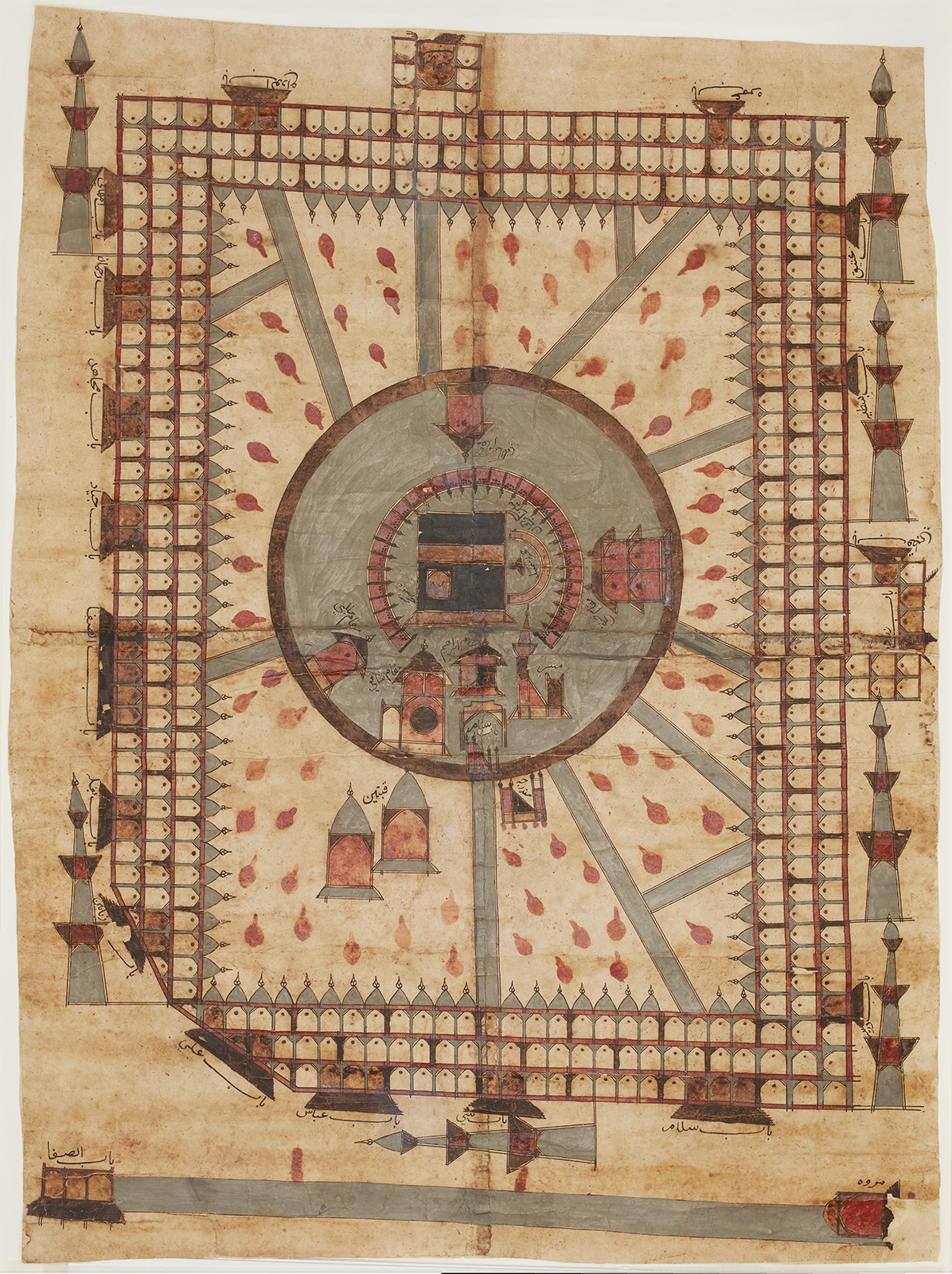 Depiction of the Masjid al-Haram (Holy Sanctuary) at Mecca

This large painting is composed in a conventional two-dimensional style, depicted in a simple colour palette with concentric organization. Small black inscriptions label relevant architectural elements and buildings. The holy sanctuary appears as a large rectangle with three rows of surrounding porticos, marking an angle at the lower left corner. The cubicle of the black-shrouded Ka‘ba is shown as a vertical rectangle that acts as a focal point to which the other elements converge: buildings, gates, pilgrimage paths, and the reddish drop-like Zamzam water jars that are sprinkled between the paths. Familiar details of the Ka‘ba are  the door and the black stone (hardly visible, but inscribed) on the left, or the waterspout. This latter is labeled here in Arabic mirzab rahman, pointing to the Arabic tradition in which this painting was created. [2] The semi-circle stands for the low hatim wall, inscribed as hijr (stone of) Isma‘il, where Abraham built a shelter for Hajar and their son Isma‘il. The three-quarter circle with arrows represents the high circle of metal with suspended lamps. Between this and the outer closed circle is the mataf, a space for worshippers to walk (circumambulate) around the Ka‘ba. This space encloses the four maqams or pavilions of the four legal schools of Sunni Islam—hanafi (right), malaqi (above), hanbali and sha‘fi (both lower left). Following convention, the maqam sha‘fi is depicted in the prime position—on the upper level of a two-storey building, above the zamzam dwell, indicated here in traditional sign language as a circle. [3] Next to it are the maqam Ibrahim, and below it, the old arched gate bab salam and staircase, and further to the right, the minbar (pulpit) of the Ottoman Sultan Süleyman. The latter is marked with a tall conical top, echoing the Ottoman style of minarets and minbars. [4] Outside the hatim or semi-circular wall are the two domed buildings Qubbatayin, storage houses for carpets, drinking water, olive oil, and other supplies. Entrance gates (bab) to the holy sanctuary are marked with staircases in front of brown-filled arches. They include Salama, Nabi, ‘Abbas, ‘Ali, Zubayn, al-Safa, Rahman, Ibrahim.

The concentric composition is reminiscent of the circumambulating that pilgrims to Mecca are required to perform. [5] It also evokes the direction of prayer that the Ka‘ba Muslims have to follow in any prayer, and emphasizes that the Ka‘ba is the house of God and the holy centre of the Muslim world. However, the minarets—rocket-like towers—deviate from that design. Probably due to limited space, four of towers are vertically staggered on the sides, and two are laid horizontally, on the lower end of the rectangular sanctuary. At the bottom of the composition is the mas‘a road, where following the visit of the holy enclosure, pilgrims have to walk and run, between Marwa—shown here as a domed building with stairs, also vertically oriented, on the right—and Safa on the left, depicted as a triple arched buildings with stairs. Two narrow horizontal red stripes touching the road probably represent the pair of milestones, indicating the running part of the ritual.

The painting has been coloured in few tones and with little differentiation or hierarchy given to details. Grey-blue is used for domes, minaret towers, pilgrimage paths and the hatim area; red-brown to colour buildings, but also zamzam water jars or the milestones between Marwa and Safa; and brown to fill certain gates and even precious details such as the gilt waterspout or the golden band of Ka‘ba. The Ka‘ba is black in accordance with its black shroud. The simple colour palette and the stylized graphic approach suggest commercial art. A group of comparable examples exist; for instance, one such example is a Hajj certificate dating to 1192 H/1778-79 (in the Aga Khan Museum, AKM528 [6]), dating such a commercial workshop in the late 18th century. [7]

Completing the pilgrimage is highly important in the life of a Muslim, and brings pride to the pilgrim hajji/hajja and his/her family. Upon return from the journey, it is customary to celebrate and visit the hajji/hajja. Traditions exist to visually mark the accomplishment of the Hajj for the community, such as adding a small Ka‘ba painting to the entrance of the house, hanging the pilgrimage certificate in the mosque, or even commissioning a Ka‘ba/Mecca tile for a mosque.[8] Thus, Hajj certificates not only were attestations for the pilgrims, but also served as pilgrimage “ex-votos” to announce the broader community that sites and prescribed rites were completed by a pilgrim or the official representative.[9]

While the function of certificate is not certain in this work on paper, its large size reminds us of the visual and religious purpose of depicting the Ka‘ba. In a time before photography, images and maps of the Holy Site in Mecca reminded Muslims both about their mandatory pilgrimage, and about the journey to be completed in the future. Such depictions focusing on the Ka‘ba were also visual symbols of the house of God, and thus of Allah. Hanging on the wall, or stored and to be looked at like a precious showpiece work of art, they could be enjoyed alone or together with special guests.