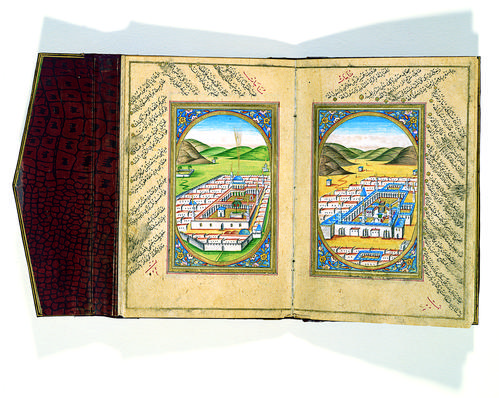 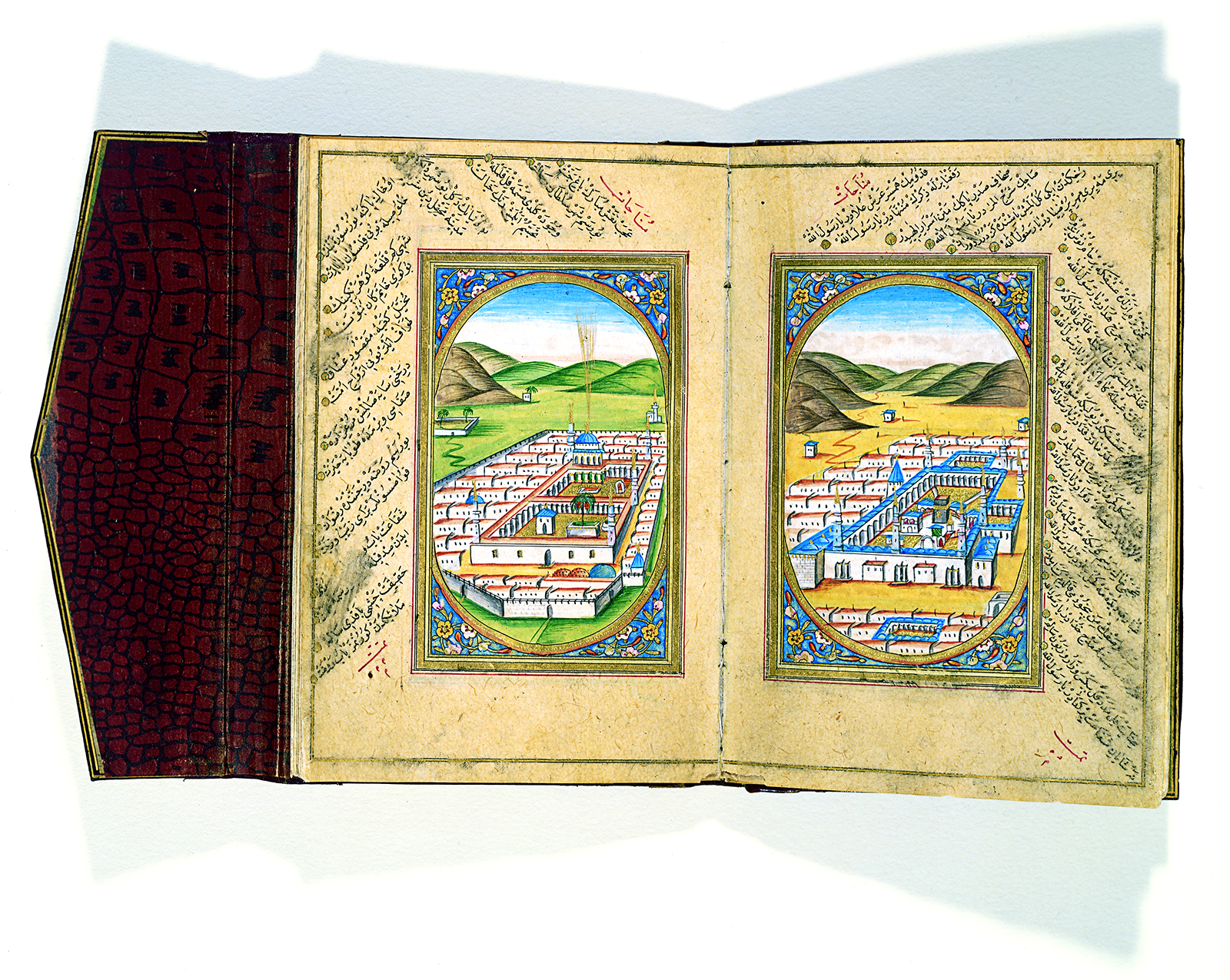 Many variations of the text exist, often reflecting different stylistic or calligraphic conventions, as well as different approaches to book production in regional traditions. This manuscript comprises 91 leaves and is bound in red morocco leather. Its cover bears a gilt-embossed arabesque design with a central medallion motif and spandrel-like pattern decorating the four corners. Common for Dala’ils, this work was conceived as a pocketsize manual for Muhammad devotion; common for Ottoman examples, it contains fewer pages on particularly thin paper, rendering the manuscript especially light and portable. The content is abbreviated but includes relevant parts of al-Jazuli’s text. It begins with an introductory part, few prayers, a section on the virtue of invoking the blessings of the prophet, and a list of the holy names and titles of the prophet. The Arabic text with Ottoman passages is fully vocalized. While the main text is written in Arabic, with eleven lines per page in black naskhi script, the two double-pages that follow the opening two pages have diagonally arranged lines in the margins. Two of them depict the holy sites of Mecca and Medina. The surrounding Ottoman text are münecat or “prayers” with red titles. On the recto, the prayer states that “this image is the city of the sultans” (bu resim sehr-i sultani) while on the verso it reads “this image is the Garden of Paradise” (bu resim rawzat-u’l-cennet). This annotation in the margin is an Ottoman adjusted version of the passage in Arabic describing the garden in Medina where the Prophet and his companions ‘Abu Bakr and ‘Umar are buried. The body of the text follows these short sections, presenting the actual blessing prayers upon the Prophet. This version of the manuscript is divided into the usual eight hizbs (ahzab) or ritual sections, one section per day for a period of eight successive days from Monday through Monday.[2]  However, typical of Ottoman Dala’il manuscripts, the text, decorative elements, and layout work together to form a decorative sign language that allows readers to locate parts of the book more efficiently during the recitation ritual.

The opening page of the manuscript is highlighted with an ‘unwan, a decorative illuminated half-page panel with floral composition and margins that are continuous to the top, and a smaller illuminated wavy-floral motif above the basmallah. This is a common decorative composition also known from later Ottoman Qur’ans. Characteristic small golden circles punctuate the otherwise continuous text. They mark the ends of verses or are inserted between the holy names and epithets, where they probably symbolize the Eulogy for the Prophet salla llahu ‘alaihi wa-sallam (May God bless him and give him Salvation), which the reader of the text is supposed to repeat during the ritual of recitation of the Dala’il al-Khayrat.[3]

Typical of Ottoman Dala’ils, individual sections and parts are divided with horizontal golden narrow bands that run between the margins. They have a simple border and floral motifs on each side of a cartouche-like surface in the centre, which has space to bear a title. In this copy, the cartouches have been left blank. The titles of sections such as al-hizb al-awwal or al-hizb al-thani… al-hizb al-thamin (“first section,” or “second section … eighth section”), which mark the beginning of a new ritual recitation at one of the eight days, have been added instead as red annotations written in the margin, at or close to the beginning of the passage in question.[4]

After the body-text of prayers, the manuscript closes with a common late Ottoman colophon, which records the names of the scribe, Ibrahim al-Hafiz and the patron Üsküdari Muhammad ‘Aden and the date 1793. While the owner was originally from ‘Aden - either from Yemen or another place, the reference to Üsküdar provides a link with the Asian shore of the Bosporus in Istanbul, where the owner or his family had moved to. The lines on this page are outlined in cloud-like bands against a golden ground. The lower half of the page is decorated with simple floral motifs growing out of a curved vine-like branch that unfolds within triangular fields framing the colophon text. All is set against a golden background.

Most characteristic of Ottoman Dala’ils is the double-page depicting Mecca on the right and Medina on the left side, each inserted in a gold ovoid border with floral motifs decorating the four corners of the composition. Both holy sites are rendered as a bird’s-eye view with similar organization. The focus is on the Great Mosques at the centre. Clusters of buildings surround this focal point and fill the foreground, while the upper third features a landscape with hills and a significant amount of sky in the background. The three-dimensional style reflects the European-inspired pictorial style that developed in Ottoman painting beginning in the early 18th century, and specifically influenced the rendering of Mecca, and which also served as a model for Medina imagery. See AKM382, AKM535 and AKM278 for examples of Dala’il al-Khayrat prayer books in the Aga Khan Museum Collection.

Notes
[1] The full title is Dala’il al-Khayrat wa Shawariq al-Anwar fi Dhikr al-Salat ‘ala al-Nabi al-Mukhtar (Translation from Witkam, 2007: “Guidelines to the Blessing and the Shinings of Lights, Giving the Saying of the blessing prayer over the Chosen Prophet”).
[2] Witkam 2007, 67–82.
[3] An Ottoman example dated 1848 in the collection of the Metropolitan Museum of Art, New York comprises such circles with Eulogy written in minuscule dust script (2017.438). These inscribed Eulogy circles are placed between the names of the prophet and confirm this interpretation. This interpretation is also proposed by Daub 2016, 151–58.
[4] The article al- is omitted, for example hizb al-awwal.