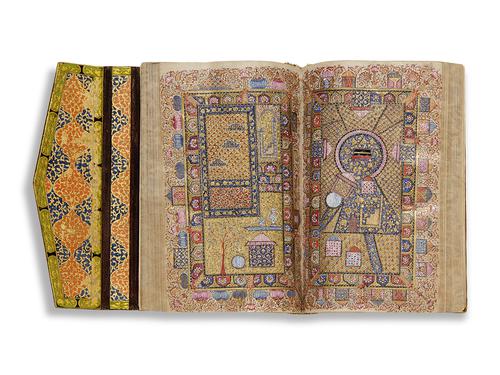 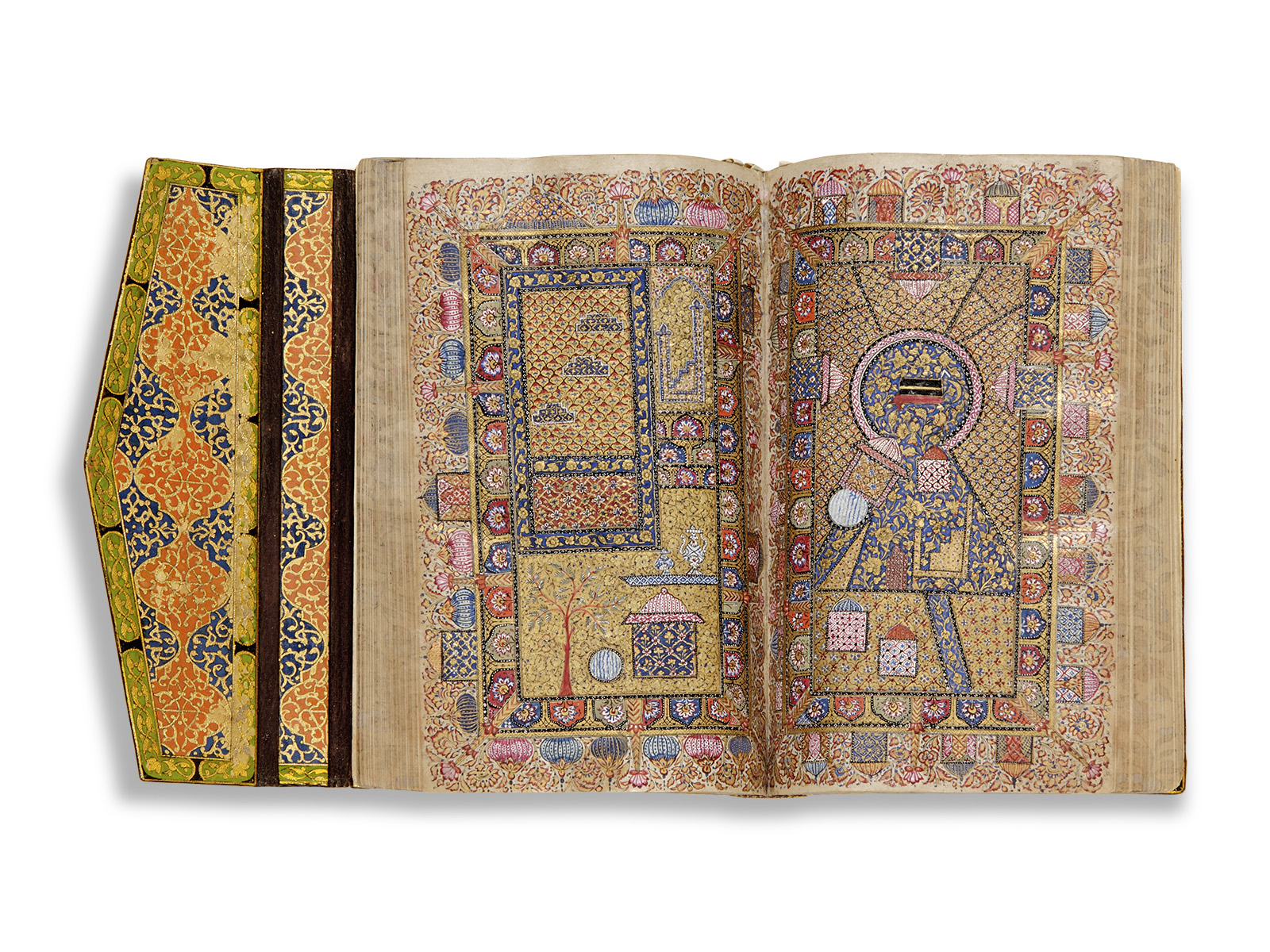 Both the text of the Dala’il and its artistic treatment exist in many variations. This example from the Aga Khan Museum Collection reveals the sophistication of Kashmiri Dala’il production. The manuscript is bound in a gold and brown lacquer binding with floral repertoire and cloud-band motifs, composed with central medallion and large spandrels in the corners. The inner covers have a blue background with red cartouches overlaid with delicate gold filigree. Ten richly illuminated double-pages decorate the beginning of individual sections.

The codex comprises 213 folios and several blank pages at the beginning and the end. The text is written in Arabic, fully vocalized, with either eleven or five lines per page in black naskhi script. It includes an introductory section, with instructions entitled al-hajati (“needs”) of the duration (from Sunday to Saturday) and the rituals of reciting the Dala’il; a section on the virtue of invoking the blessings of the prophet; a list of the holy names and titles of the prophet; and the description of the blessed garden in Medina (sifa al-rawd a al-mubaraka), where he is buried next to his companions ‘Abu Bakr and ‘Umar. These short sections are followed by the body of the text, which contains blessing prayers upon the Prophet. Here, such prayers are divided in seven ritual hizbs (ahzab) or sections, allotting one section per day for a period of a week starting on a Sunday. This organization deviates from the more common division into eight sections, for prayers from Monday through Monday.

The layout and designs of illumination and ornamental panels in this codex have both a decorative and functional goal. The ornamental sign language is hierarchically organized and guides the reader through passages and sections. Important chapters—such as the opening of the book, the part introducing the waymarks of the Dala’il al-Khayrat, or the seven individual ritual sections (hizbs)—begin with an elaborately illuminated jadwal-double-page. The text block is limited to five lines, while prominence is given to a stylized four-leaf clover pattern covering the entire surface. The individual leaves are pointed, their corners filled with a fleur-de-lis-like pattern that is delicately decorated with small leaves and floral motifs, all in alternating shades of gold and lapis blue surrounded by a border with repeating drops highlighted in red. Except for the opening double-page with empty cartouches, each of these illuminated jadwal-compositions bears a calligraphic title-cartouche referring to the part in question (For example al-hizb al-awwal …, al-hizb al-sabi‘a). Black annotations in the margin of these decorative jadwals indicate which day of the week the ritual/section the reader should recite.

A less prominent decorative layout feature subdivides individual chapters. For example, within the introductory part (first jadwal), the instructions of when and how to recite the text are presented as a title inserted in a line of the continuous text. Al-hajati (pages 9 and 10; what is necessary/instructions) is written in the centre with a small gold floral ornament on each side. In addition, between the inner and outer margins, a gold paisley-like motif with a diagonal red note inscribing the day of ritual guides the reader; six such decorative paisley marks exist in these instructions. The part listing the names and titles of the Prophet is marked with an illuminated calligraphic horizontal panel inserted within the inner margins (pages 57–58); this sub-section is included in the second part, hadha Kitab Dala’il al-Khayrat. Between the individual names and epithets are small gold circles outlined in black, which probably refer to the eulogy of the Prophet salla llahu ‘alaihi wa-sallam (May God bless him and give him Salvation), to be repeated during recitation.[2]

Other decorative calligraphic title panels within the ritual sections reflect an older division of the prayers in quarters, thirds, and a half, often kept in Dala’il manuscripts.[3] Red and blue inks are used to throughout the text to indicate important passages. For example, in the description of the blessed garden in Medina with the tomb of the Prophet and his two companion, the two first words, wa hadha (and this is…) are in blue and visually distinguish this passage from the otherwise continuous black text. It is followed by a double-page depiction of the two holy cities of Mecca (on the right) and Medina (on the left) (fig.1).

Typical for Kashmiri Dala’il al-Khayrat works, these sacred sites are composed in a two-dimensional style. Architectural elements and other details are arranged within rectangular fields evoking bento boxes. A concentric composition—using circles within circles—increases the focus and sanctity of these two holy cities. Mecca is represented on the upper right side with the keyhole motif enclosing the Ka‘ba, indicated as a small rectangle above and the minbar or pulpit below, the various maqams or pavilions (including the four legal schools of Islam) surrounding it. Medina is depicted on the left side with three diagonally succeeding tombs—one for the Prophet and two for his companions—on the upper left side and the minbar on the right within a many-lobed arch. In the lower half is tomb of the Prophet’s daughter Fatima, in the garden that she planted with a palm tree when her father was alive; all is symbolizing the gardens of the Prophet’s tomb. Next to it on the left are the water dwell (represented as a conventional circle) and the tomb of Fatima (shown as a domed building). Typical for Kashmiri copies, small but delicately rendered details, such as an ewer, are also included in the composition. The palette is rich, varying from blues and reds to green, white and gold. Intricately detailed and often floral ornamentation covers or alternates with buildings and fills the background, rendering this double-page a large and precious garment or tapestry. See AKM382, AKM535 and AKM278 for examples of Dala’il al-Khayrat prayer books in the Aga Khan Museum Collection.

Notes
[1] The full title is Dala’il al-Khayrat wa Shawariq al-Anwar fi Dhikr al-Salat ‘ala al-Nabi al-Mukhtar (Translation from Witkam 2007, 69: “Guidelines to the Blessing and the Shinings of Lights, Giving the Saying of the blessing prayer over the Chosen Prophet”). For previous publications with Ottoman attribution, see Welch 1972, p. 139; Architecture in Islamic Arts: Treasures of the Aga Khan Museum, 2011.; The Path of Princes: Masterpieces from the Aga Khan Museum Collection, 2008.
[2] An Ottoman example dated 1848 in the collection of the Metropolitan Museum of Art, New York comprises such circles with Eulogy written in minuscule dust script (2017.438). These inscribed Eulogy circles are placed between the names of the prophet and confirm this interpretation. This interpretation is also proposed by Daub 2016, 151–58.
[3] Witcam 2007, 69. For example, the Ottoman Dala’il AKM382 has eight sections.