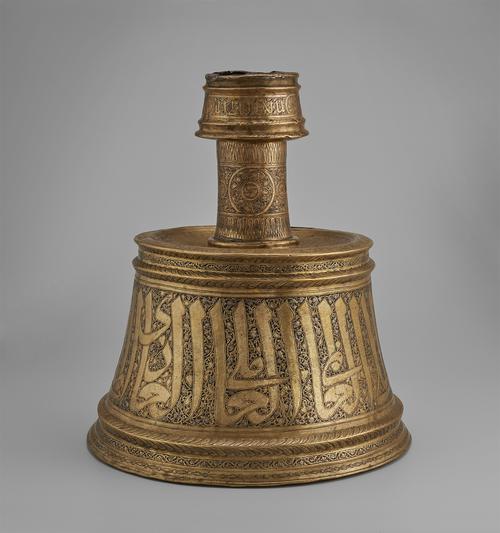 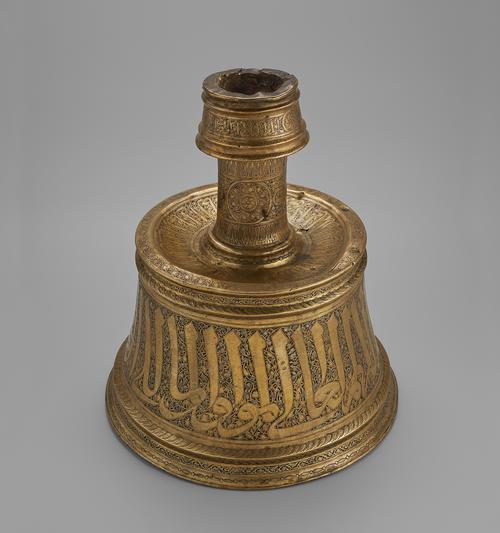 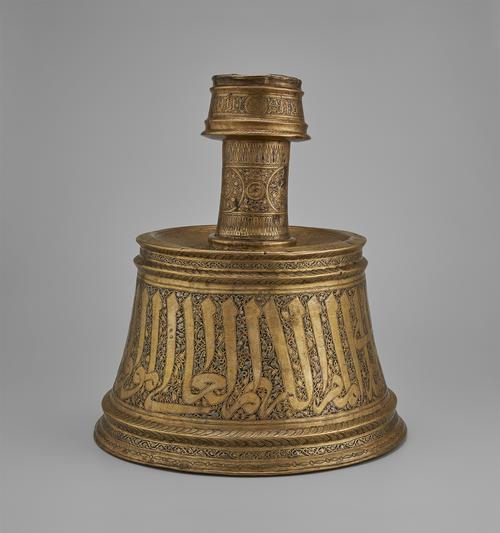 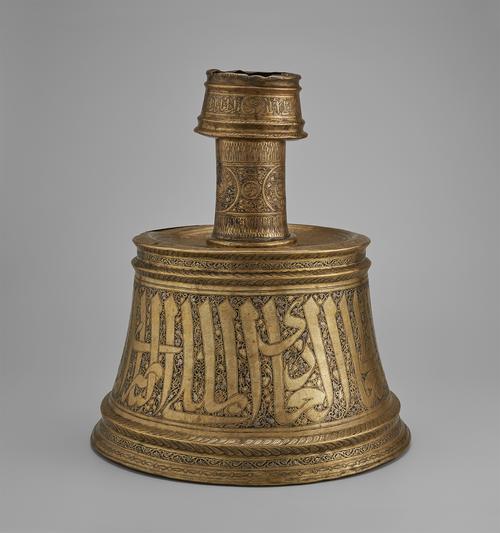 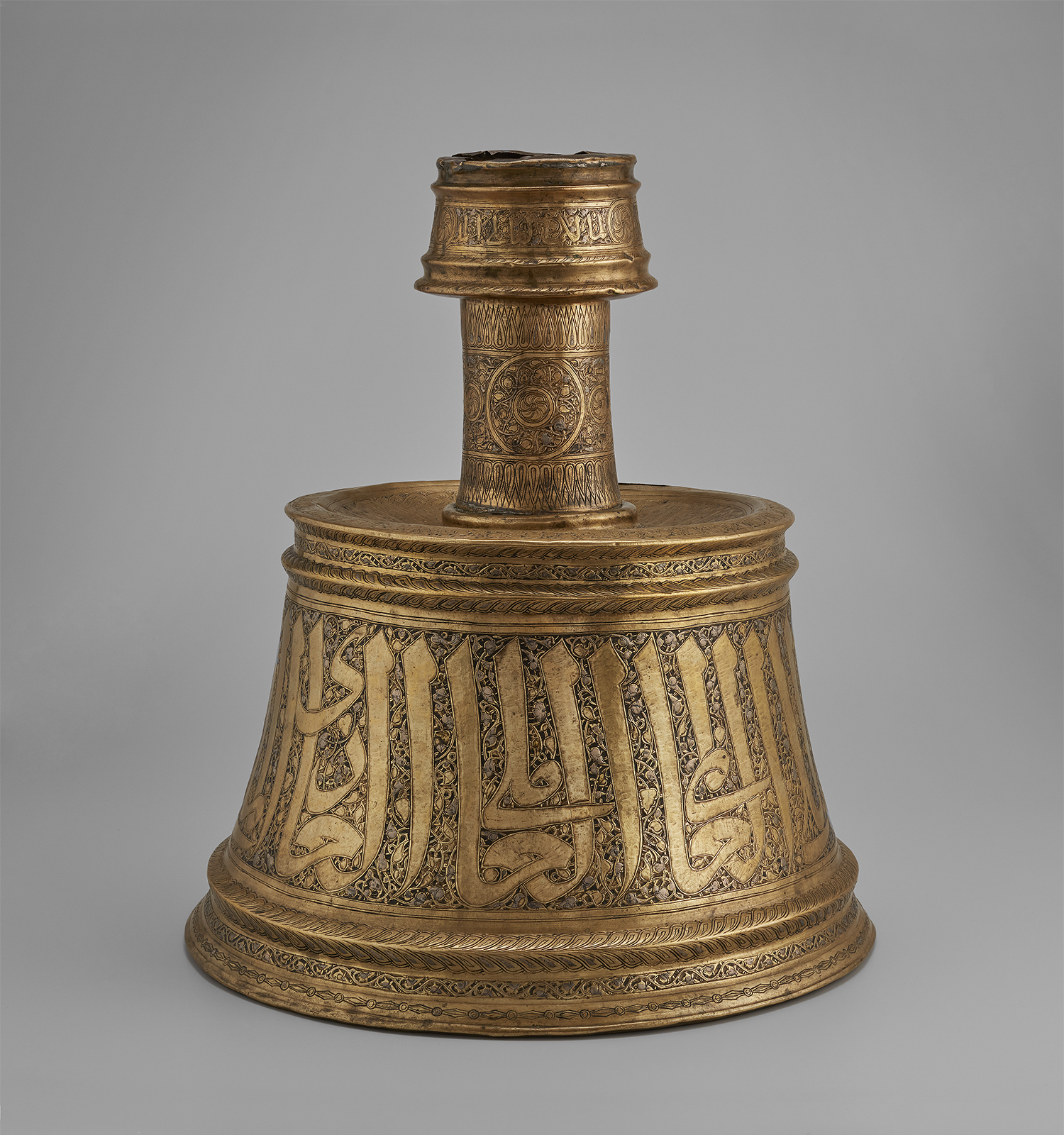 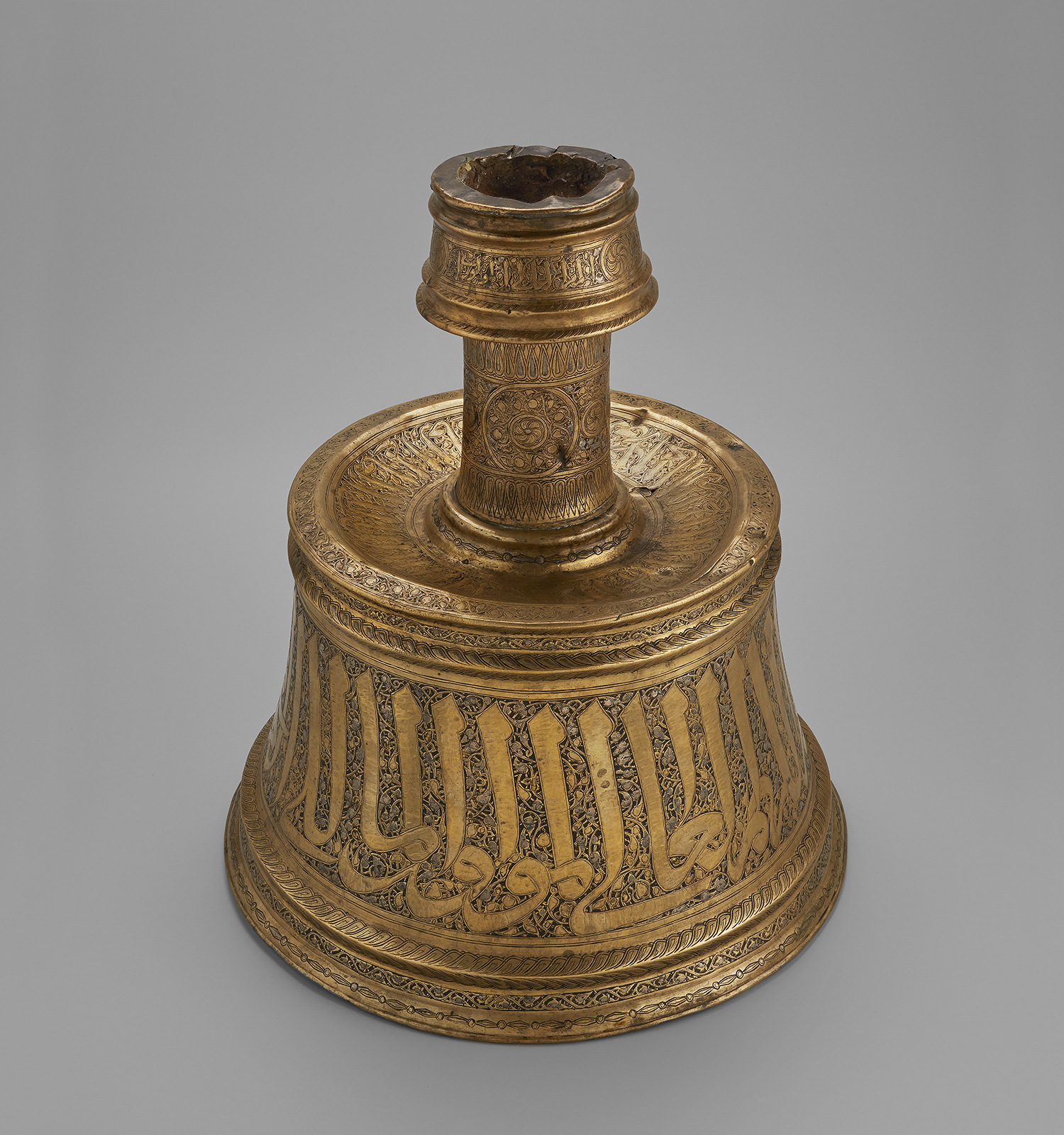 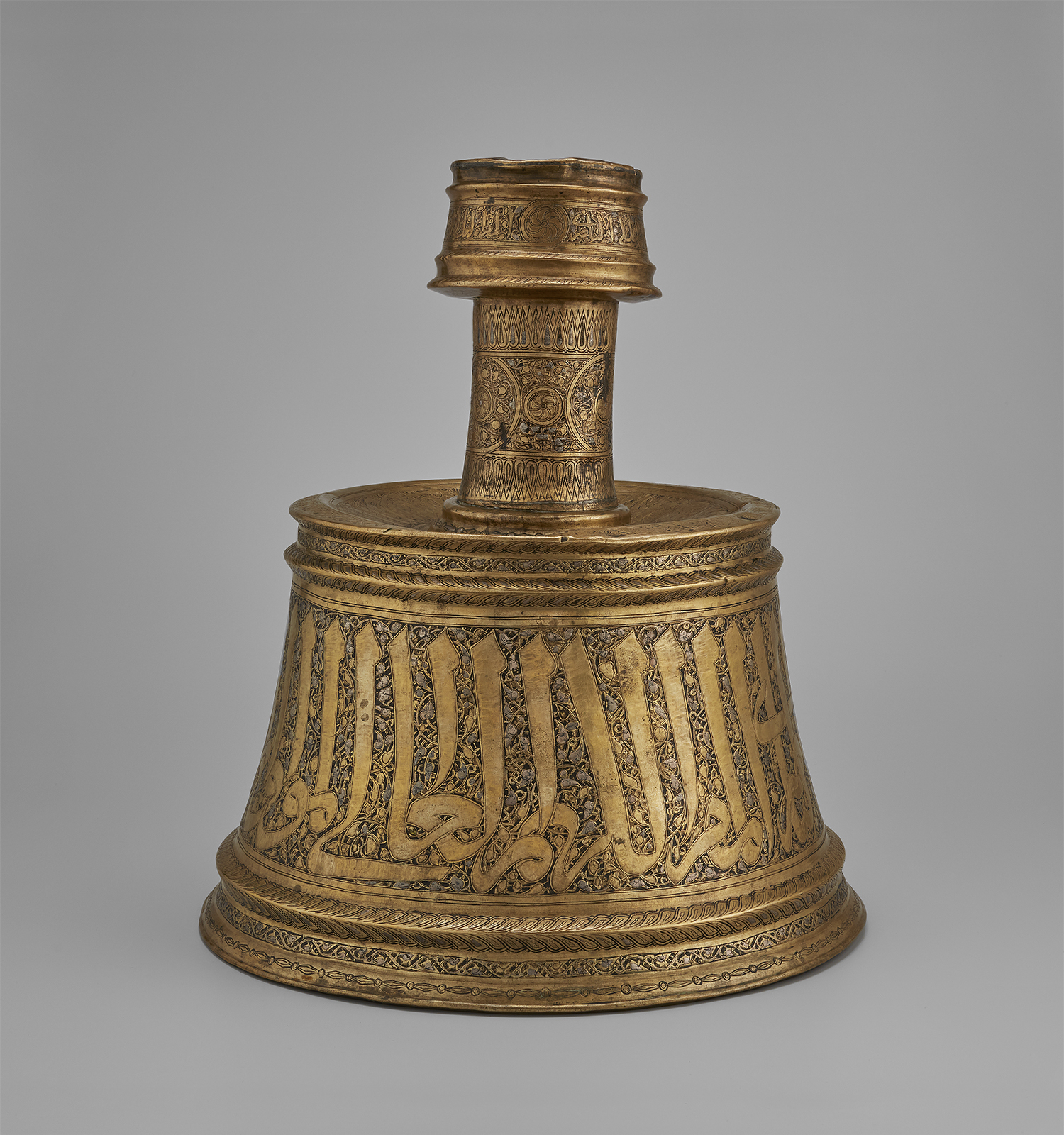 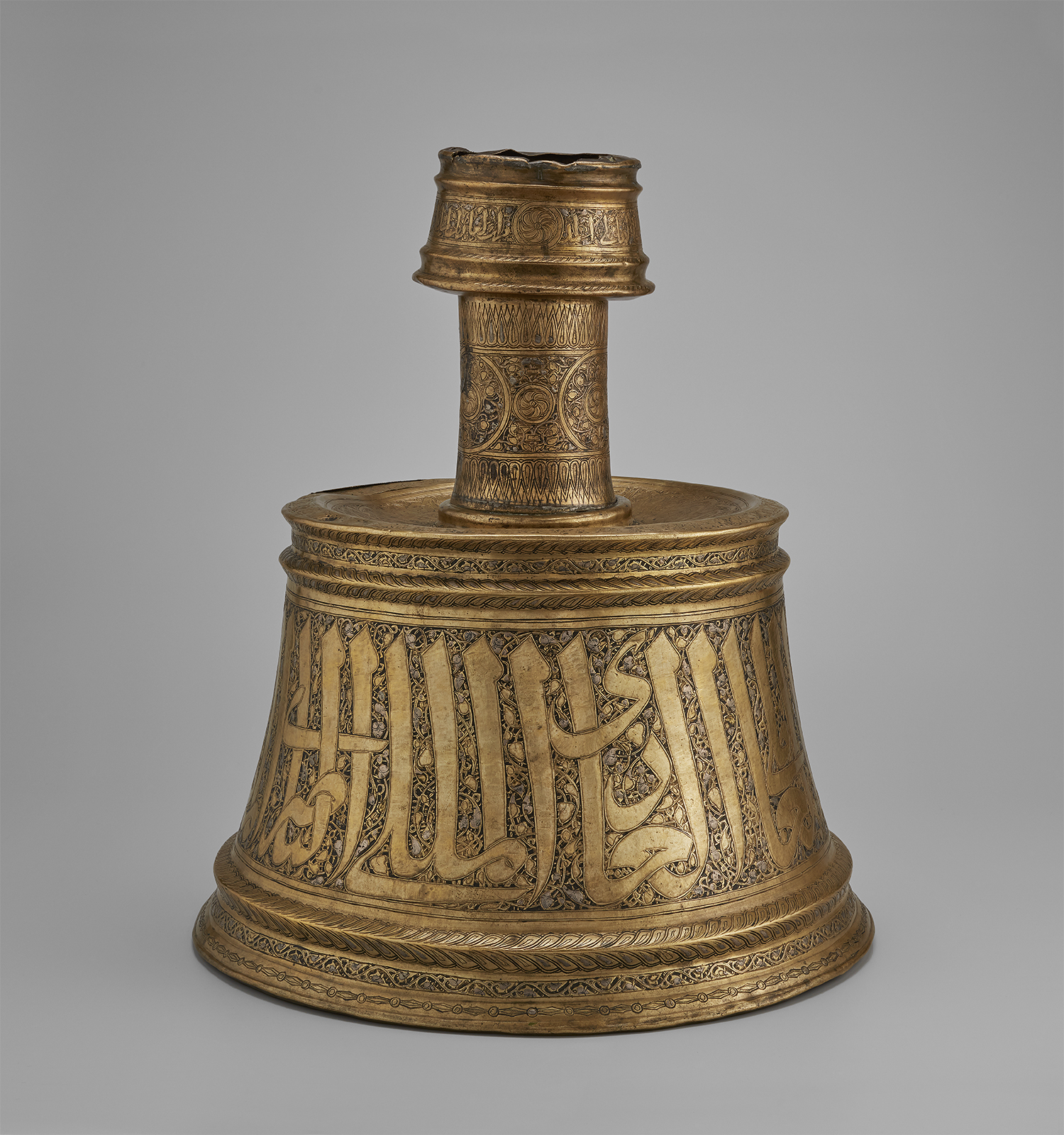 A tall Arabic inscription in bold letters adorns the candlestick body. It reads:

In addition to its large inscription, the candlestick is heavily decorated with vegetal and other patterns. A feather design runs along each of the candlestick’s ribs and upper rim. A narrow frieze of scrolling leaves lies beyond the ribs; around the lower rim is a pearl and diamond repeat design. The shoulder has an Arabic inscription in its concave drip tray. A leafy design runs around the top of the outer rim and a pearl and diamond design around the base of the neck. The wide band on the neck has a series of large and small roundels with a wide fringe above and below. The small roundels all contain a six-petalled whirling rosette surrounded by leafy scrolls. Such rosettes are also found in roundels that punctuate a narrow Arabic inscription in the candlestick socket. The ribs are plain or with engraved lines, an abbreviation of the feather design on the larger ribs on the body of the candlestick.

The candle for this candlestick might have been as richly decorated as its holder. Wax candles were often heavily scented with ambergris, aloes wood and other incense and decorated with colourful paper designs and, for the most extravagant ones, silver and gold leaf. They would be used to light the grandest buildings, both palaces and mosques. Endowments to religious buildings often stipulate the number of candles to be provided and when they should be lit. Candles and candlesticks also played an important part in Mamluk ceremonial. Contemporary historians describe how amirs competed to have the finest candle and candlestick for court processions at night. [1]