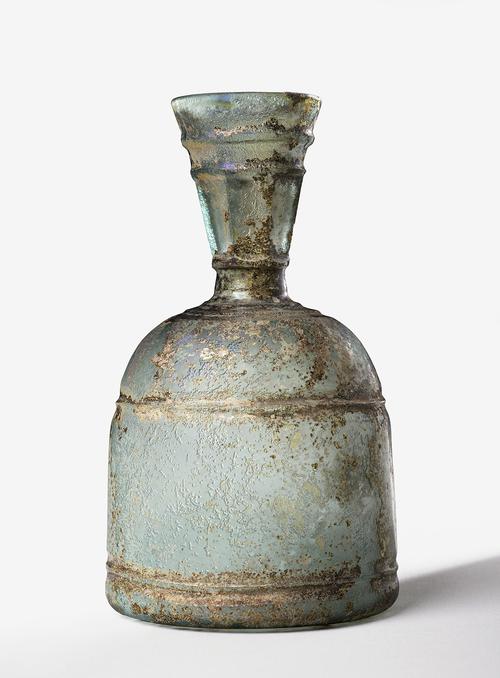 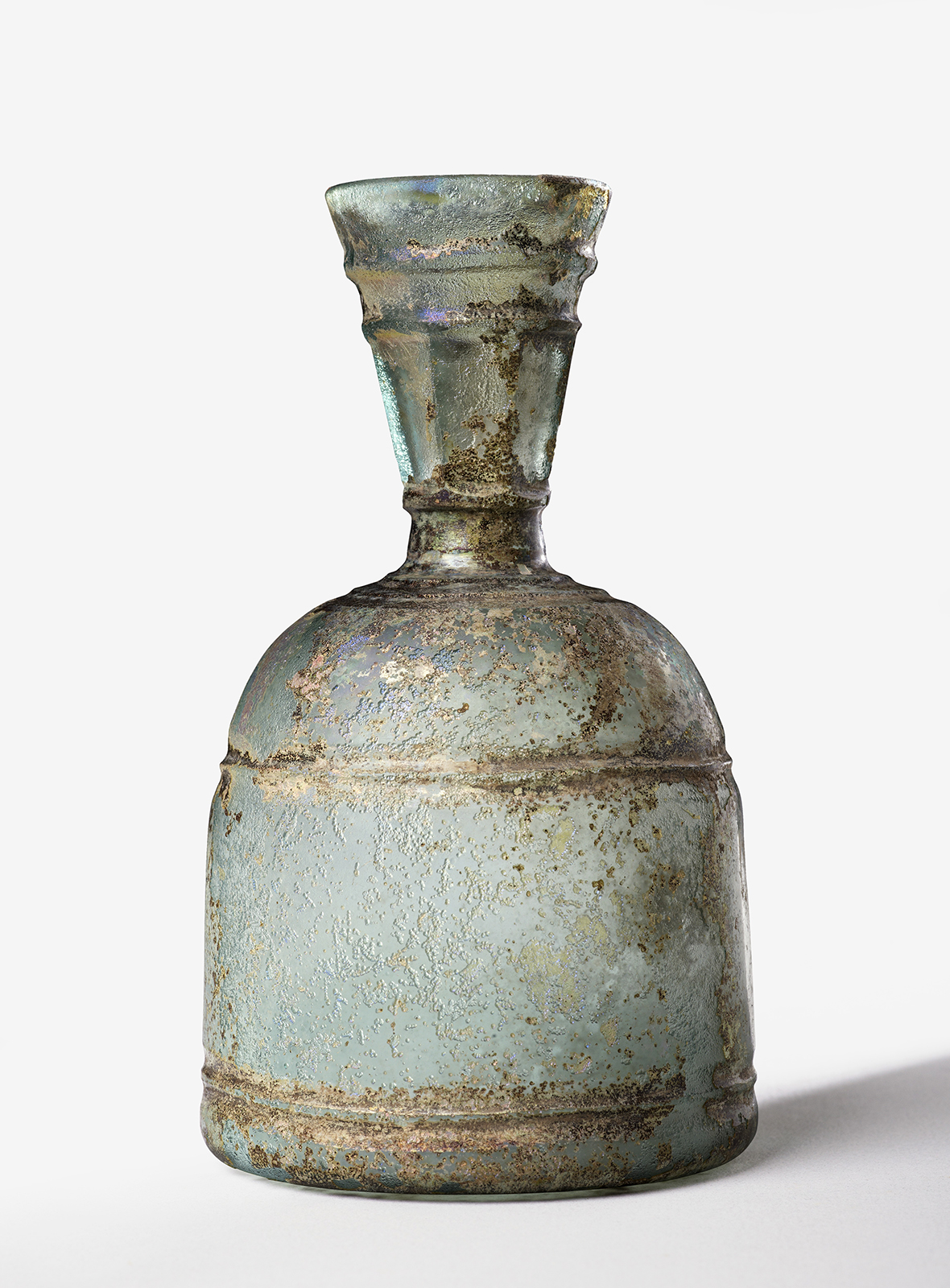 The bottle features careful relief-cut decoration on certain areas of its short, conical neck and bell-shaped body. Its neck has seven vertical rectangular facet cuts between two pronounced ridges and a further ridge below the rim. The upper part of the rim is plain. The bell-shaped body is decorated by a concentric groove on the shoulder and a pair of horizontal ridges around the lower part of the body. Originally the bottle seems to have had a polished surface. Where this has now eroded due to the burial in the soil, the matte glass surface with many bubbles imparts a different impression.

Moreover, the bottom of the bottle, generally never seen, has a circular groove which produced a raised disc. A small number of cut vessels, all from the Iranian region, have their bottom treated just like the other parts. Some have a pontil mark (created by a hot metal rod with some glass attached to it) surrounded by a square. A superb relief-cut bell-shaped bottle in the Corning Museum of Glass has two concentric discs on the bottom. It is dated to the 9th to 10th centuries.[1] Clearly, some glass objects were treated with more care than others, although one can hardly say they were made for special purposes because little is known about such details.

A number of related bottles follow a similar aesthetic approach to relief-cut decoration, demonstrating a profusely decorated neck and plain or moderately decorated body.[2] Some of the bottles unearthed during the excavations of Nishapur in northeastern Iran follow the same principle because ridges or grooves are the only decoration they have. Not all of them are of the same quality, suggesting that glass workshops may have made experiments to find suitable aesthetic answers.[3] A large bottle of turquoise blue glass in the Corning Museum of Glass has a neck with carefully wheel-cut faceted friezes, while the large body of the vessel just shows a pair of grooves slightly above the centre.[4]

A colourless glass bottle with a similar decoration as this one in the Aga Khan Museum Collection was discovered in a stupa (a round and usually domed building) of the Dule Temple in Jixian in China. There, the objects were concealed before 1058 AD. [5] This group is thus datable to the 10th and 11th centuries. It is one of those instances where an Islamic object was traded to China because it was highly esteemed, and it helps to give a group of glass vessels probably produced in Iran a more precise date (see also AKM650).

An increasing number of Islamic glass vessels became known from China because glass was not appreciated as much as jade or porcelain and was not produced in China in any great quantities before the Qing Dynasty (1644–1911). Islamic glass objects therefore reached China as trade goods or gifts and were placed in tombs or treasuries.