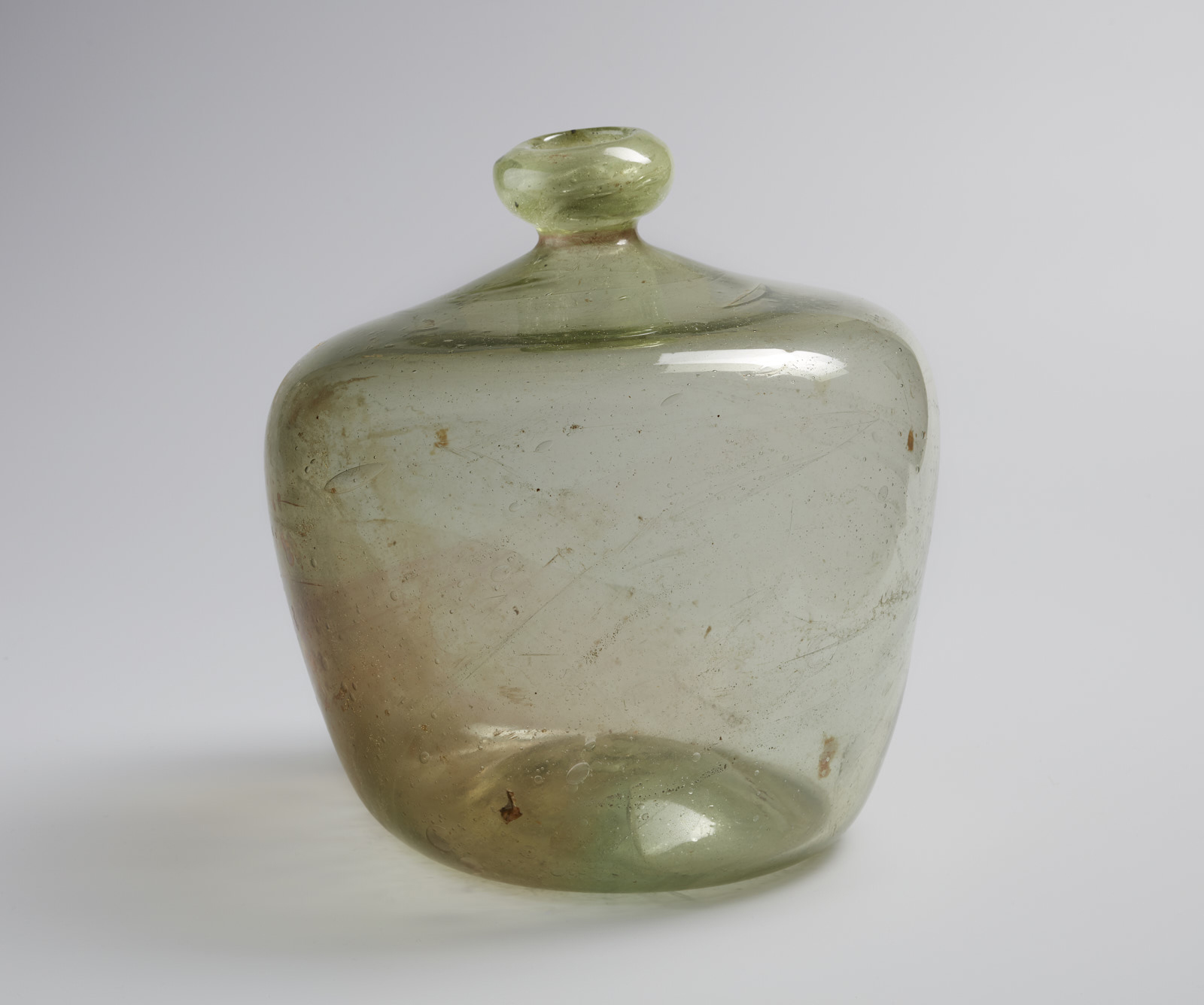 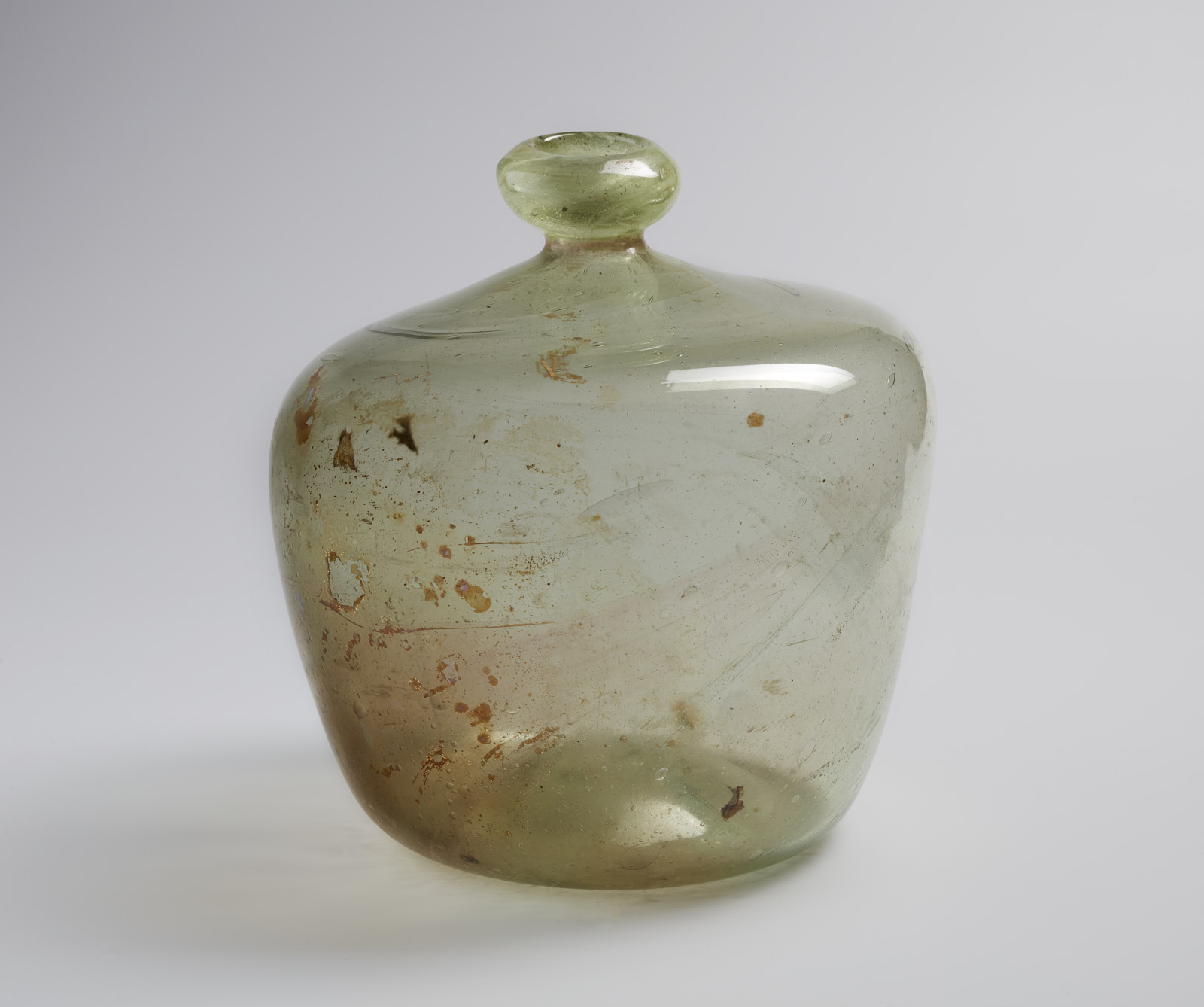 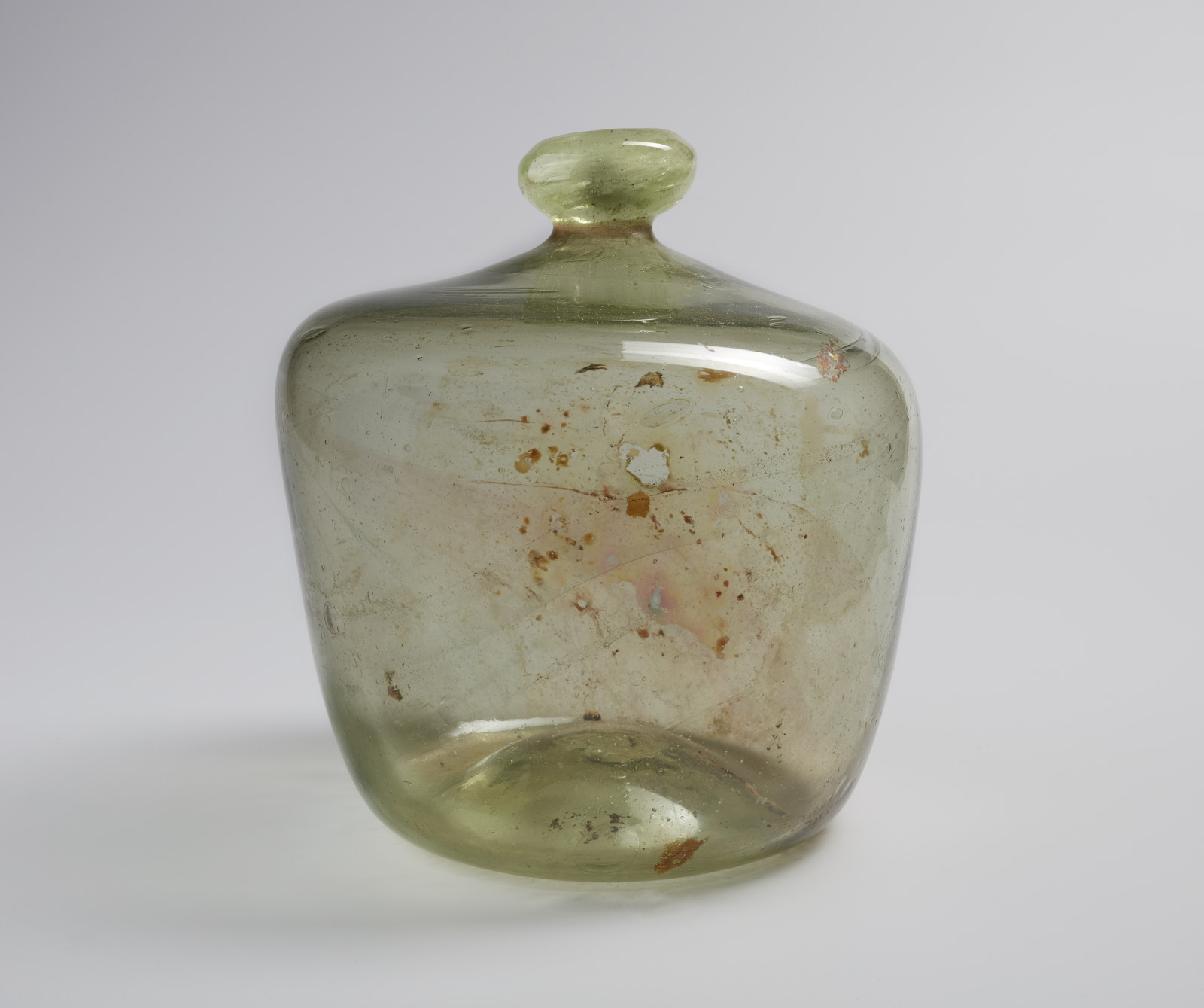 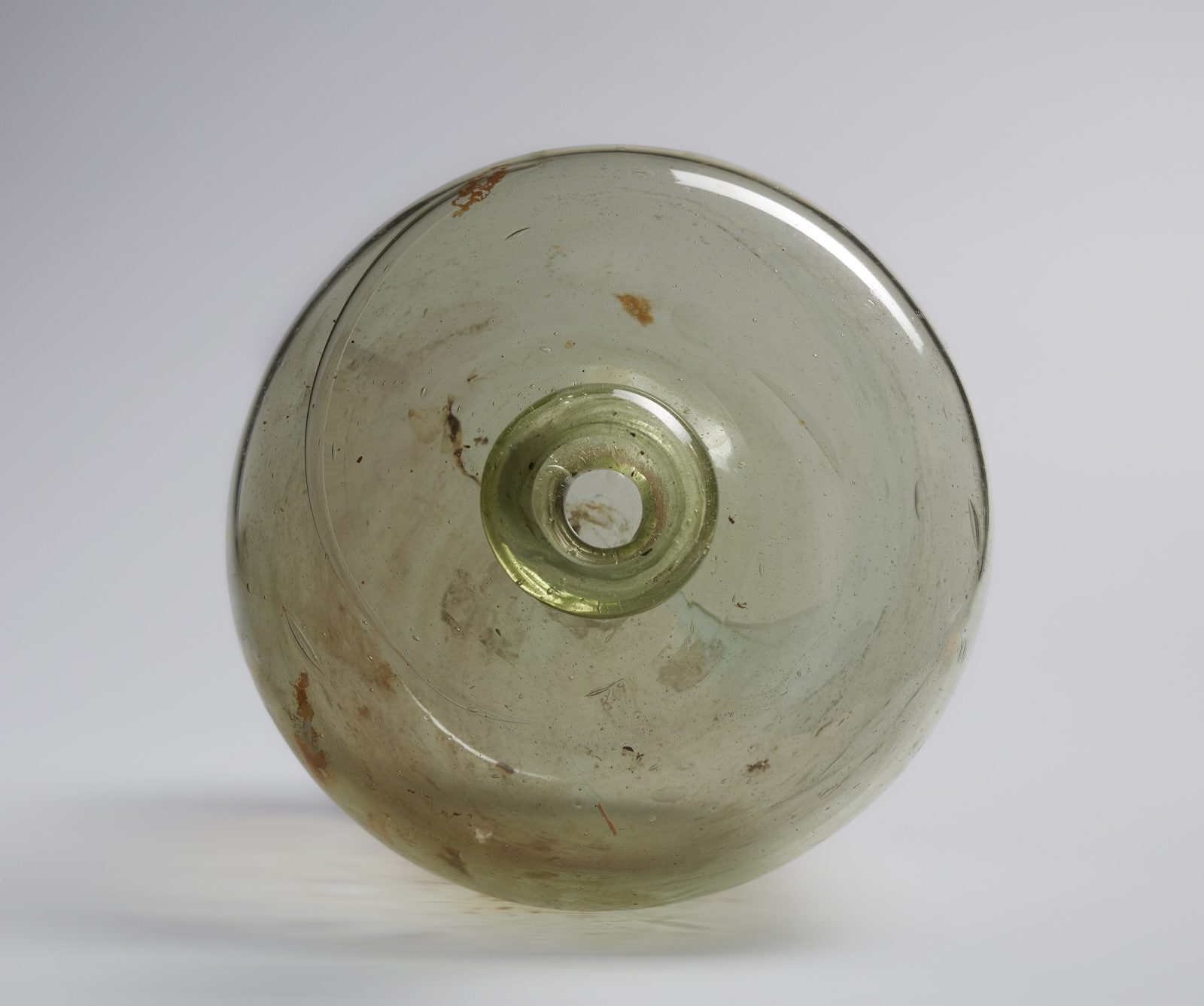 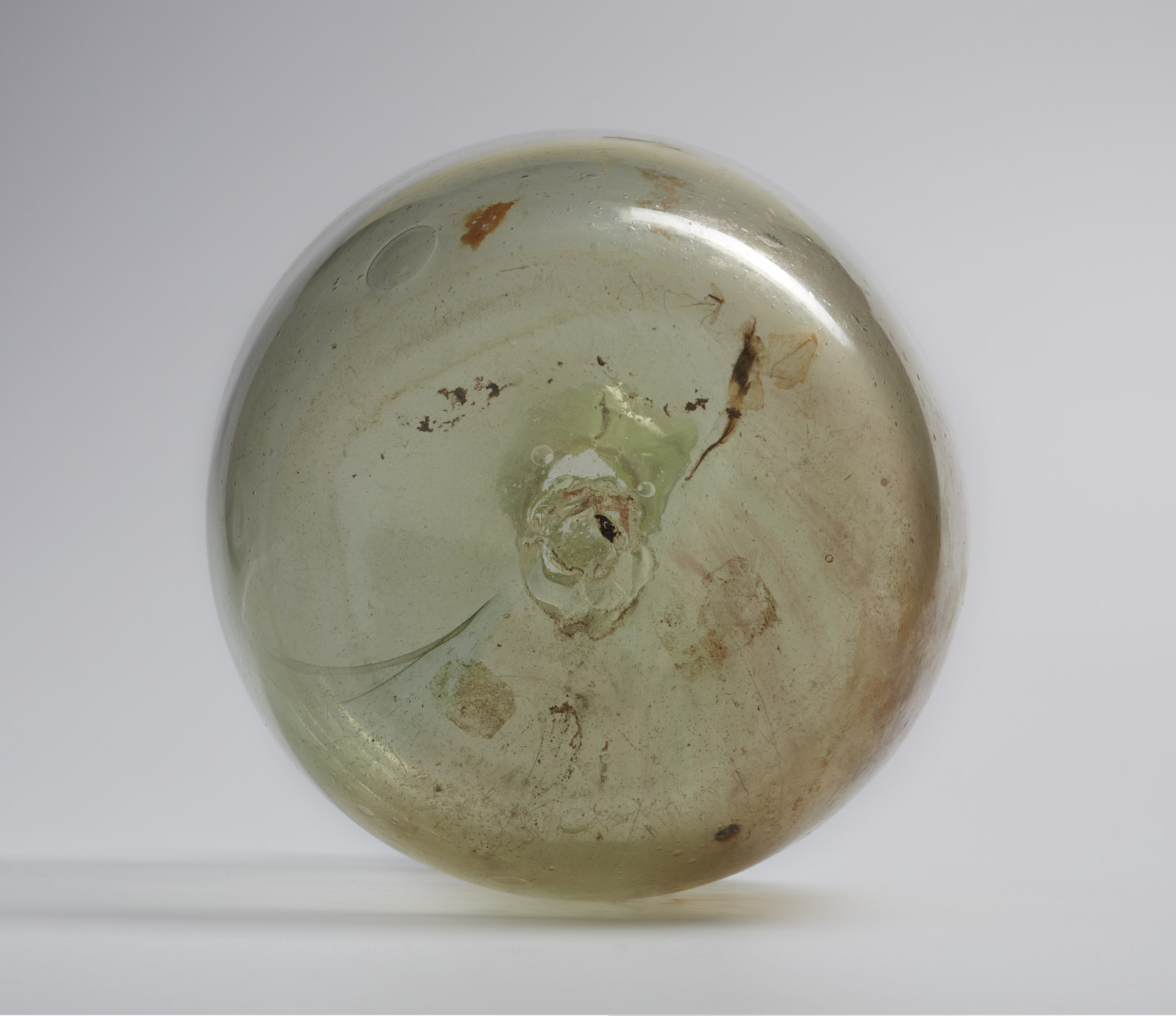 Glass vessels made for everyday use included tableware such as plates, bottles, and ewers or pitchers as well as vessels used for transport, such as this example from the Aga Khan Museum Collection. Because they lack decoration, utilitarian vessels have had a history of neglect and have rarely reached museums collecting Islamic glass. Only a limited number of finds from archaeological excavations are known, such as those in Nishapur [2] in northeastern Iran or in the town of Old Cairo/Fustat [3] in Egypt. The remains of a cargo ship which sank in Serçe Limanı near Bodrum on the Aegean coast in Turkey in or shortly after 1025 have provided additional information about this glass group. The cargo which was loaded on the Levantine coast and contained numerous necks of bottles (called bubble-rim bottles).[4]

The typical mouth was achieved when a pontil, a metal rod with some glass added to it, was pushed onto the base of the vessel while still warm. This allowed to hold the vessel in place while the artisan shaped the vessel’s mouth. Once done, he would crack the pontil off, leaving a scar or pontil mark on the bottom of the vessel. Because of its few typical traits, it is impossible to say whether this bottle in the Aga Khan Museum Collection originated in Cairo in Egypt or in the Syrian region. The finds from the Serçe Limanı shipwreck confirm, however, that it was a type of bottle typical for this region.

Our knowledge about the possible uses of such bottles is rather limited, but its narrow neck and the typical pronounced rounded mouth suggest the vessel once held a liquid. Such bottles may have been made to store or transport lemon juice or other liquids over great distances, when demand for a particular product grew outside the region. The remains of palm tree leaves or some other material could be used to protect glass vessels during transport. Only vessels valued for their decoration or precious contents received special containers. In some regions, trade continued until the 20th century, when plastic bottles (often imitating older forms) finally replaced glass vessels.