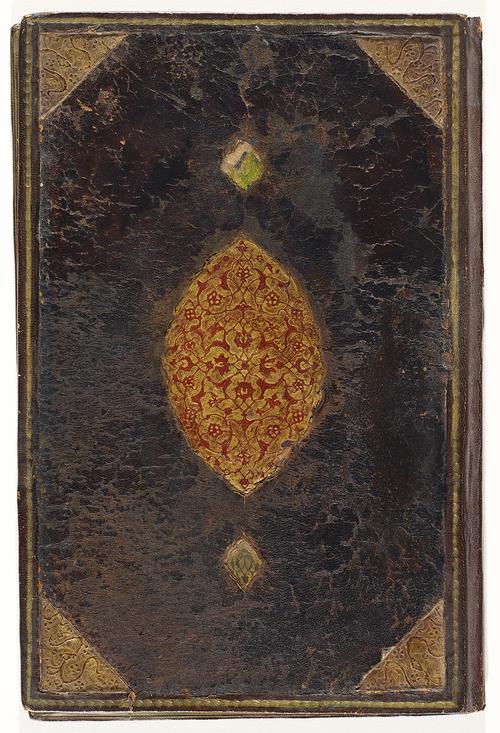 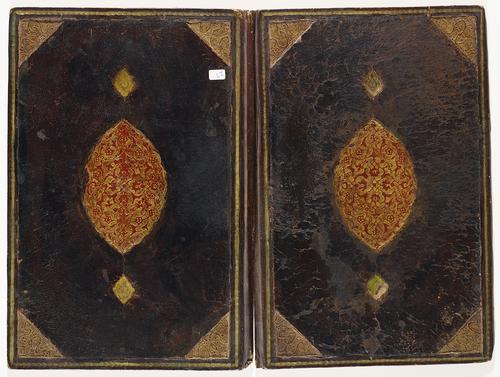 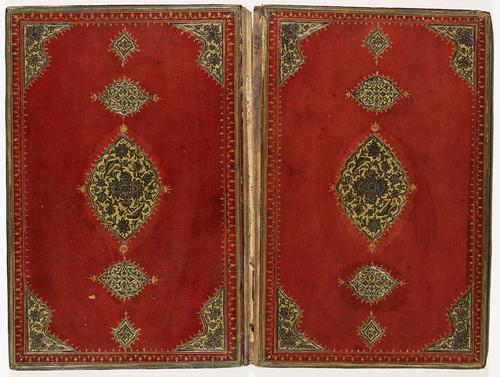 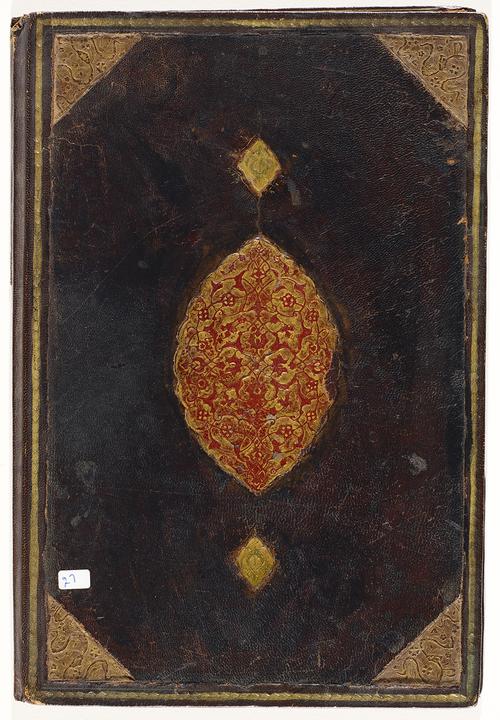 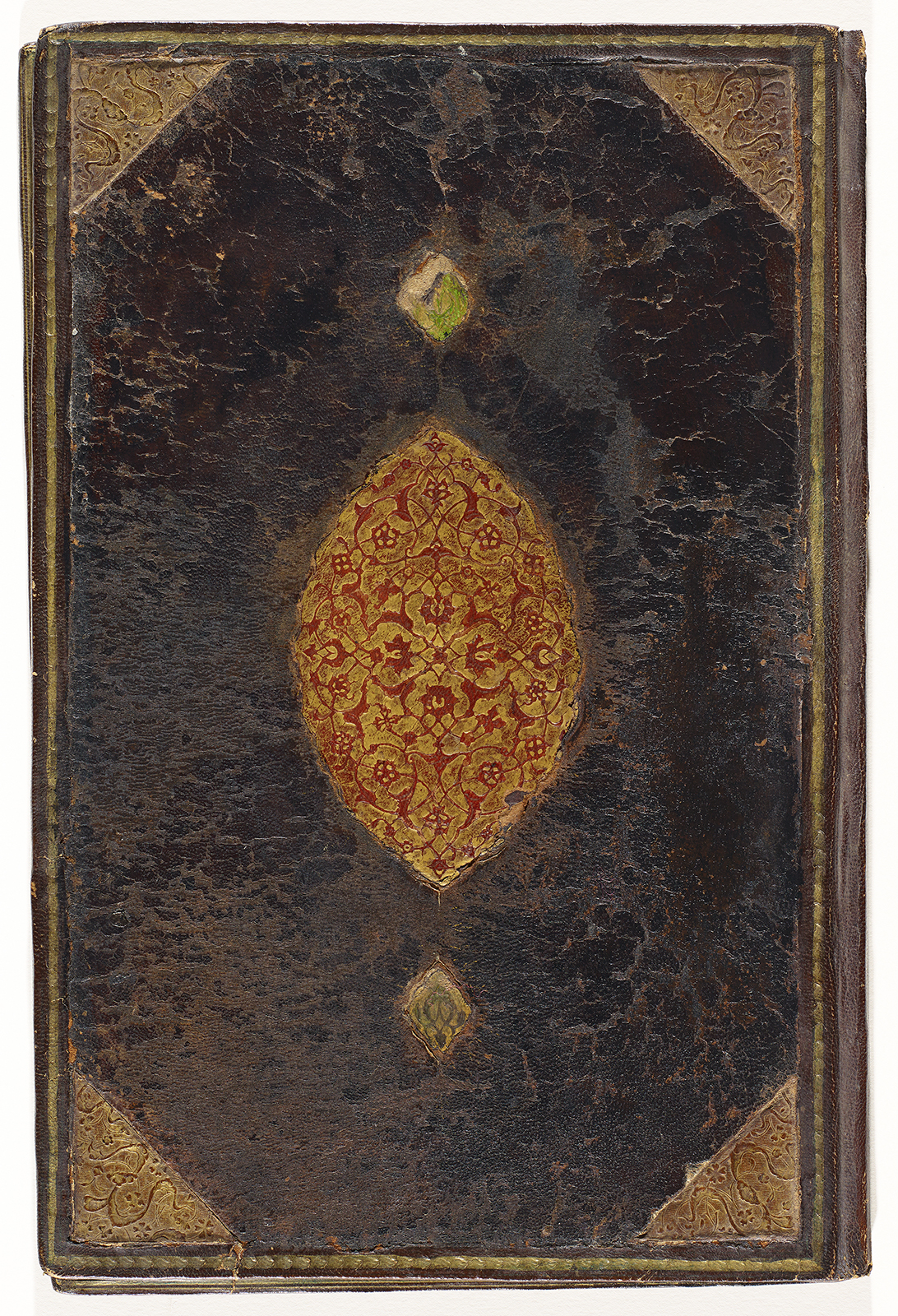 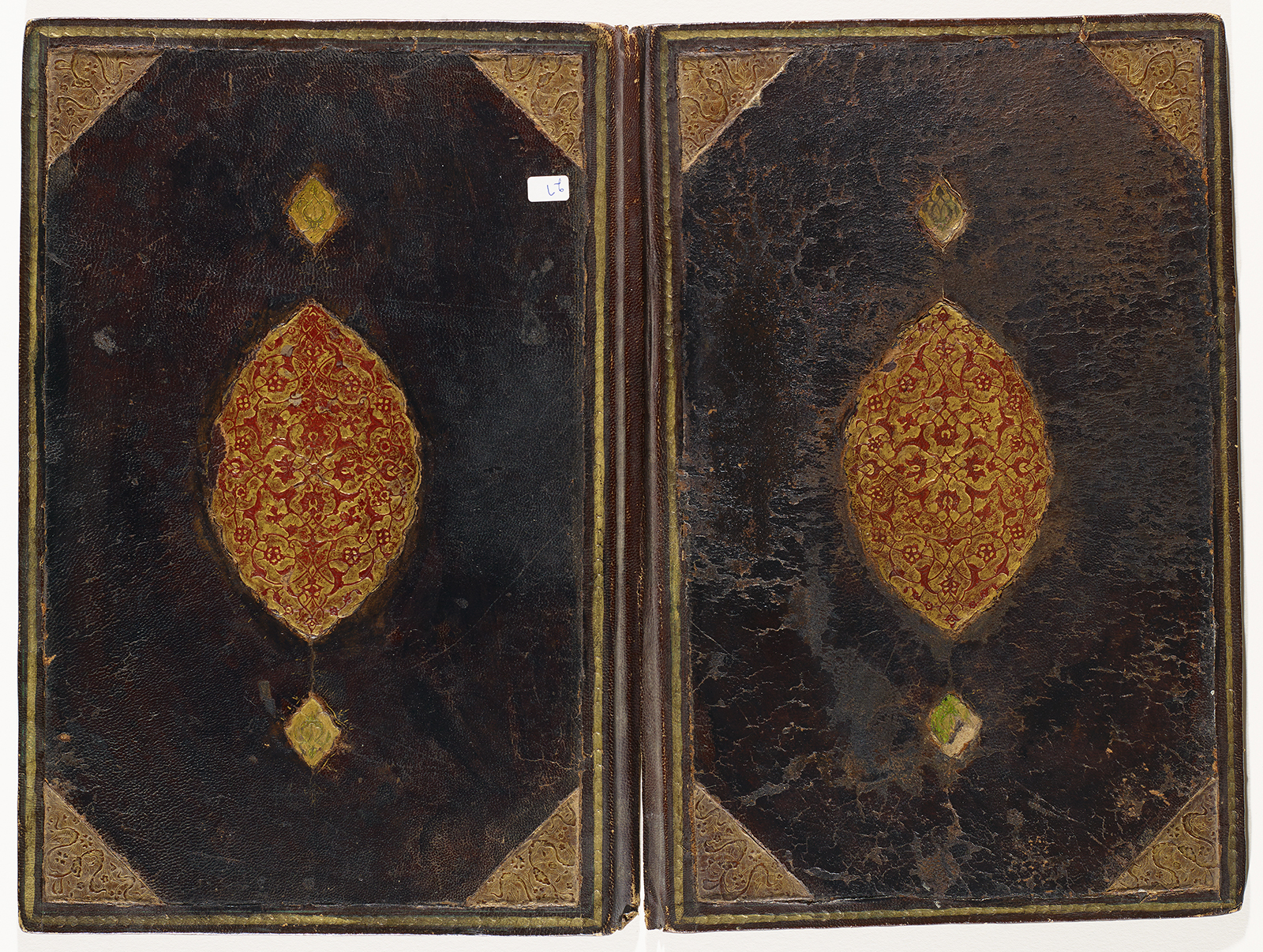 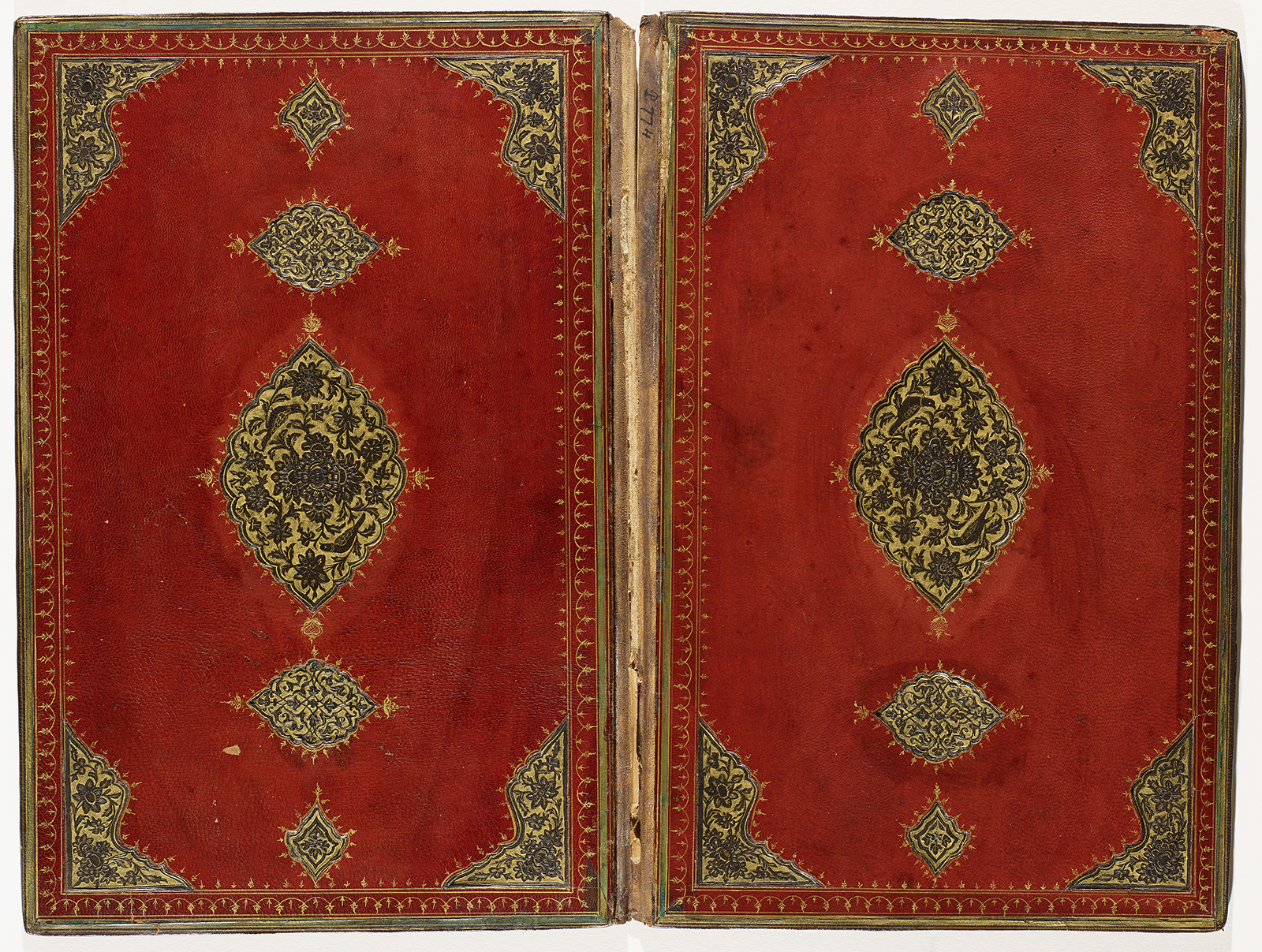 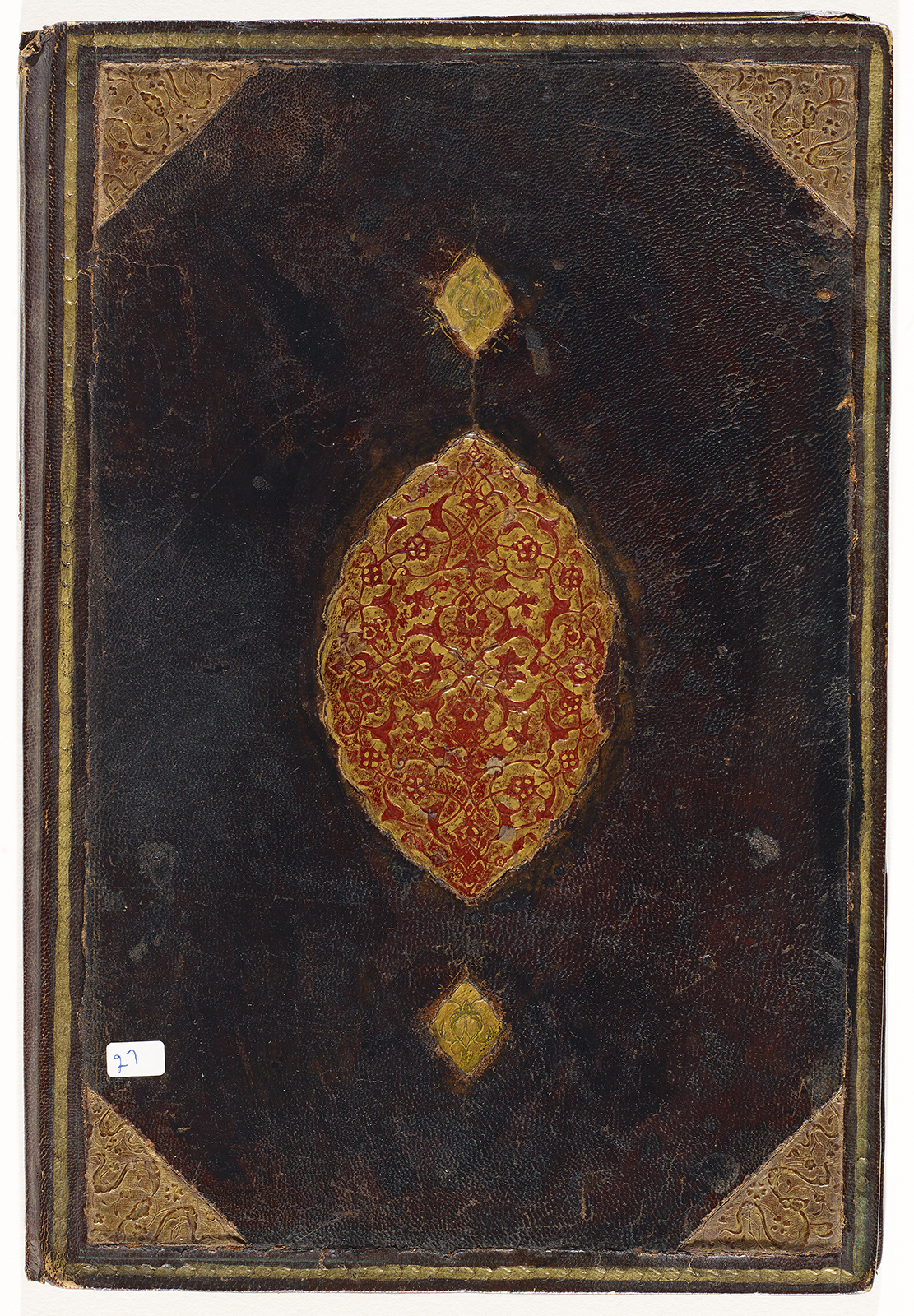 The outer covers of this binding, which also lacks a flap, are not the work of a skilled binder. The disparity between these covers and the finely executed doublures suggests that the original outer covers were removed for nefarious reasons in the 20th century and replaced by the present binding.

The outer covers are faced in chestnut-coloured leather and decorated with an oval medallion with pendants and cornerpieces. The inside of the oval medallion is adorned with a stamped design in high relief. Its centralized composition features rosette flowers on branches, stylized leaves (rumi motifs), and composite flowers. The ground of the medallion is gilded. The cornerpieces are adorned with a two-tier stamped design of scrolling branches and flowers on the lower level and cloud motifs on the upper level. The motifs are gilded.

The medallions, cornerpieces, pendants, and borders of Islamic bindings are always in the same style. Yet the decoration inside the medallion, the cornerpieces, and pendants on the cover of AKM998 are different in character. The design inside the medallion is typical of late 15th-century and early 16th-century Akkoyunlu Turkoman bindings, and of Ottoman Turkish bindings dating from the second half of the 15th century and early 16th century.[2] The decoration inside the cornerpieces, on the other hand, is in the style associated with Akkoyunlu Turkoman bindings produced in Shiraz in the late 15th century and in Safavid Shiraz in the early 16th century.[3] This unusual clash of styles suggests that the binder has used scraps consisting of medallions and cornerpieces to create this poor quality cover.

The doublures are of red leather. The central medallion has two vertically aligned pendants rather than the traditional single pendant; one in the form of a horizontal oval medallion and the other in the shape of a palmette. Inside the central medallion and cornerpieces are branches bearing large flowers, and in the medallion there are birds perching on two of the branches. The medallion, vertical pendants, and cornerpieces on the doublures are filled with cut-out leather on a gilded ground. The horizontal pendants are filled with filigree leather. The border is ornamented with gilded curved shapes.

A royal version of this binding with doublures was used to bind a manuscript Qur’an dated 1057 (1647).[4] Executed later—likely between 1875 and 1900—it also differs from AKM998 in that it has lacquer decoration.