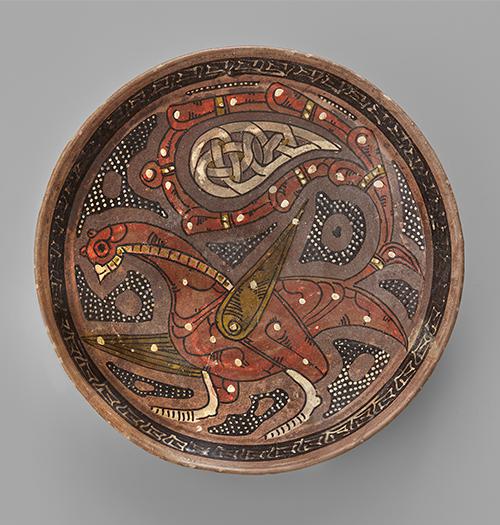 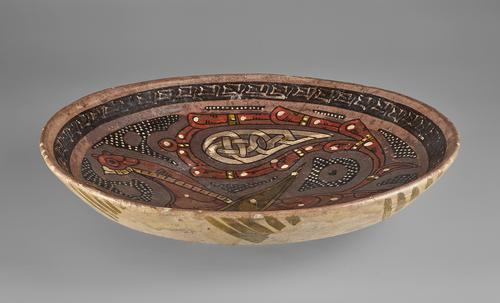 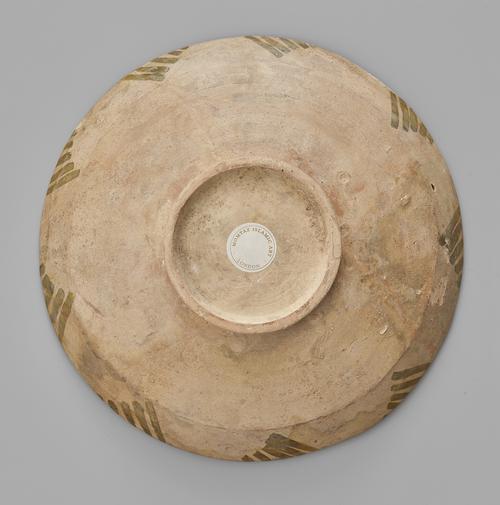 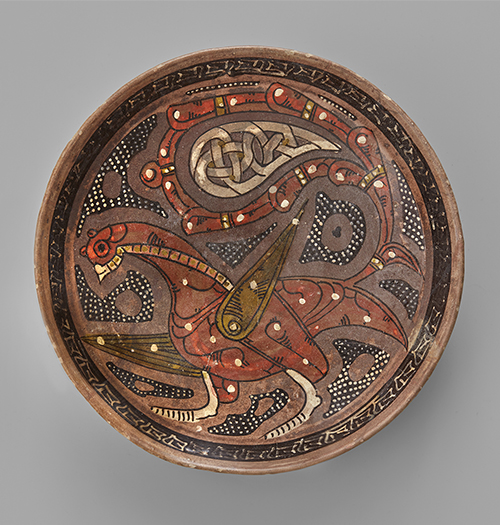 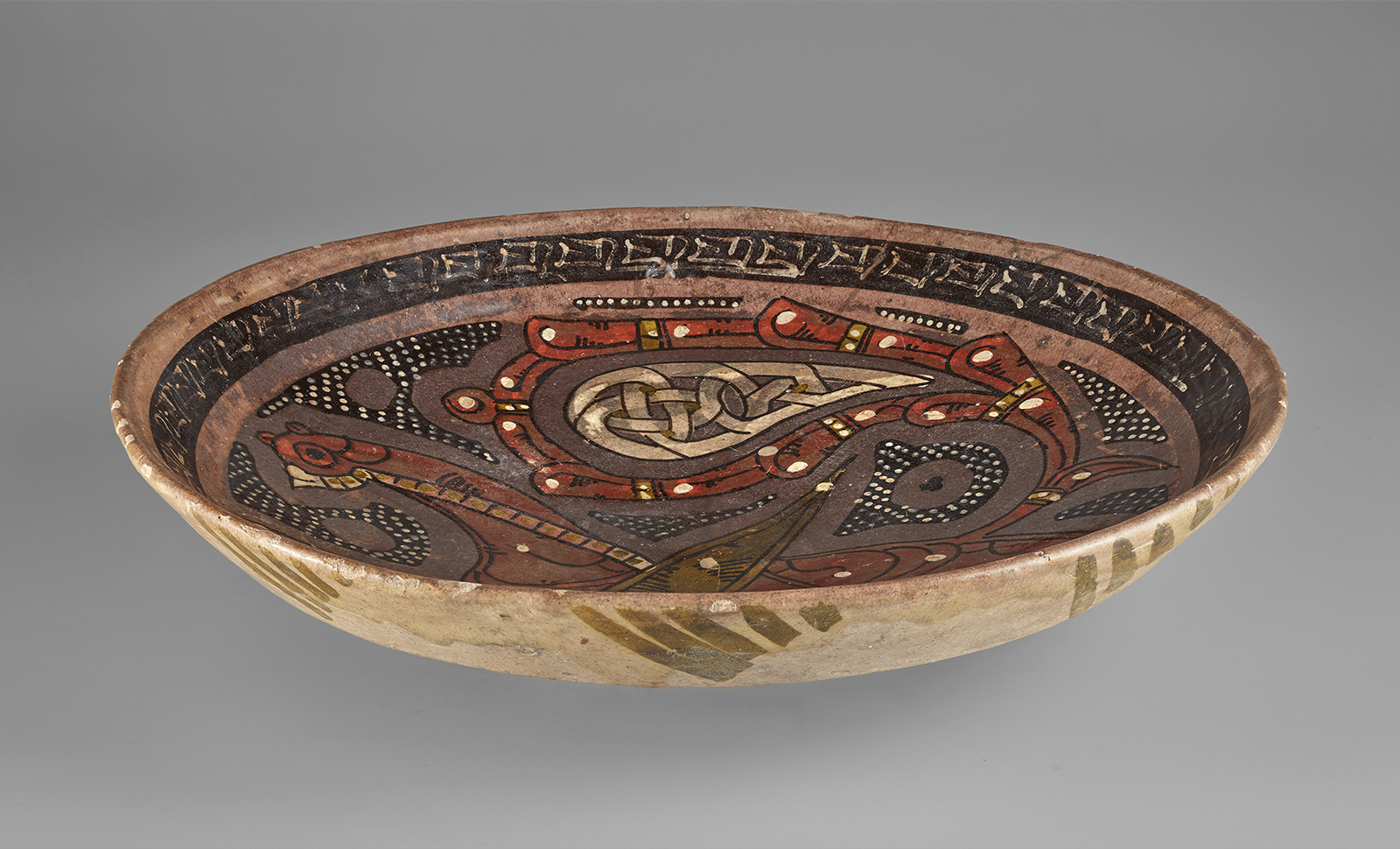 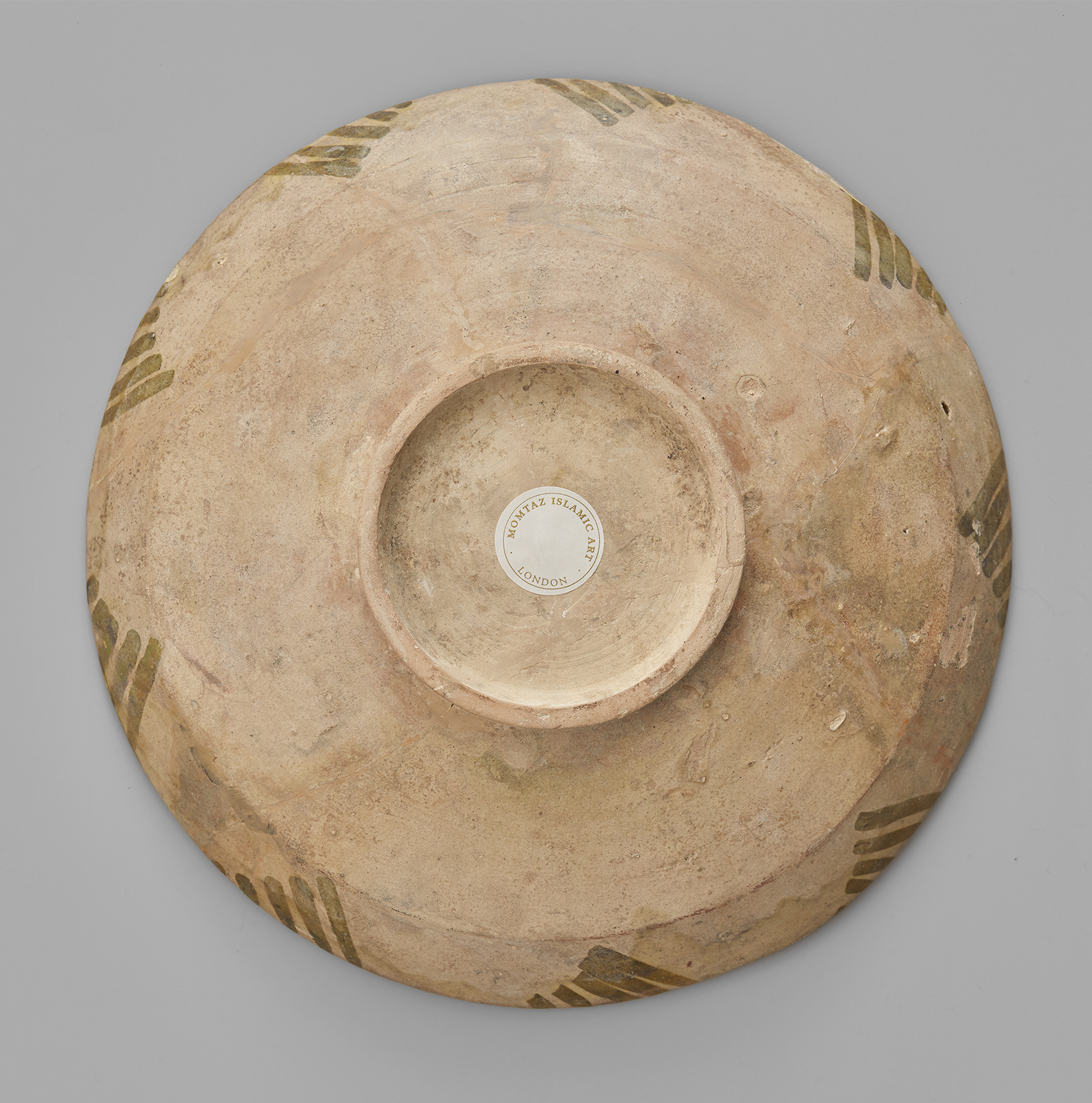 This bowl [2] in the Aga Khan Museum Collection combines all three design types. Pseudo inscriptions run along the bowl’s rim. Abstract motifs surround a stylized bird—perhaps a peacock—with a long tail raised above its back. Enclosed in an almond-shaped interlace pattern, this tail expands across the bowl’s centre. The bird walks to the left with its head slightly bowed in a gesture that accentuates the graceful curve of its neck.

Native to India, peacocks have long held a place in Iranian culture. Since the pre-Islamic period, they have been associated with the concepts of Paradise and royalty.[3] After the advent of Islam, they continued to feature in both literary and visual arts, including poetry, ceramics, metalwork, and textiles. For instance, the 12th-century Iranian poet Farid ad-Din Attar, born in Nishapur, mentions in his epic poem The Conference of the Birds that the peacock was one of the creatures who, like Adam and Eve, was banished from Paradise. Attar adds that if the peacock can defeat the serpent and resist its temptations, it can return to Paradise.[4] The peacock’s unmelodious and mournful cry has in fact been interpreted as an expression of grief following its exile.[5] Given these associations, the depiction of the bird in this earthenware bowl may represent the peacock’s exile from Paradise and its hope for redemption.[6]

1. Originally an Iranian family, the Samanids were in the service of the Abbasid Caliph to govern eastern Iran and western Central Asia. Major cultural centres were Khorasan and Transoxiana. Besides Northeastern Iran, Afghanistan, and Pakistan, the vast empire surrounded Tajikistan, Turkmenistan, Uzbekistan, Kyrgyzstan, and parts of Kazakhstan.

3. The colourful and fan-shaped tail of the peacock was associated with cosmic entities and the heavens, which, in turn, held connotations of royal power. The most well-known artwork in this regard is perhaps the 17th-century Peacock Throne of Mughal Emperor of Shah Jahan in the Red Fort of Delhi.

4. The peacock, flattered by the serpent, allowed the devil to enter paradise and tempt the first couple to their fall. The peacock was cast out of paradise, and has grieved to return ever since. See Farid-od-Din ‘Attar et al., The Canticle of the Birds, 102, 104, 113.

6. For a discussion of the peacock in a Christian context, see Oya Pancaroğlu, “Feasts of Nishapur: Cultural Resonances of Tenth-Century Ceramic Production in Khurasan.”