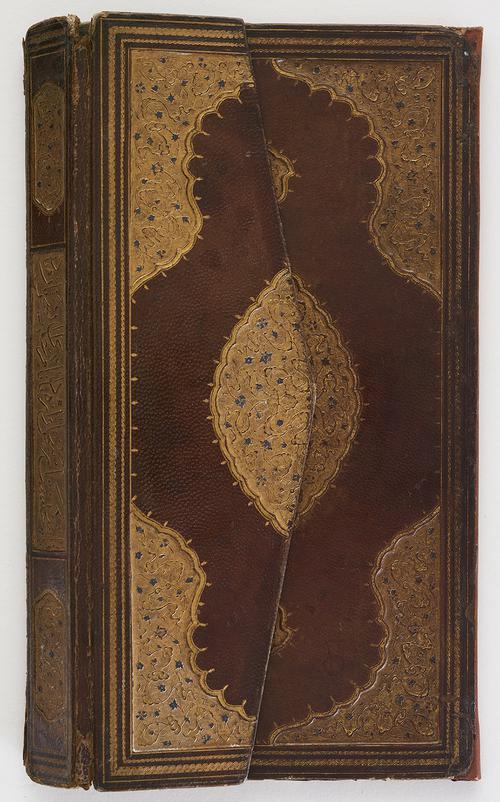 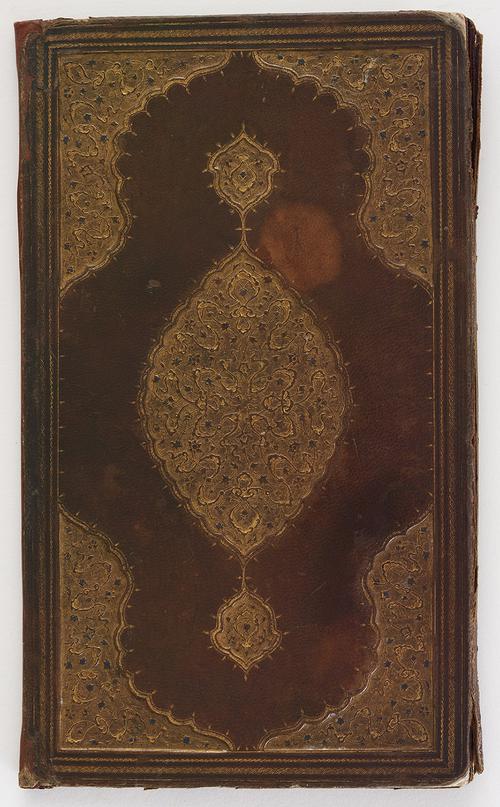 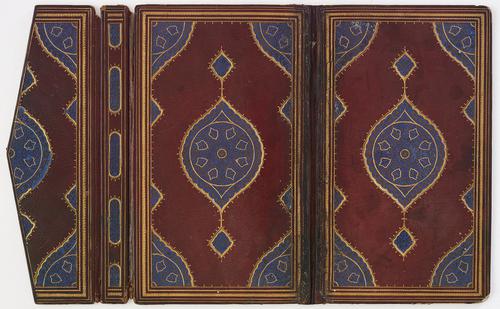 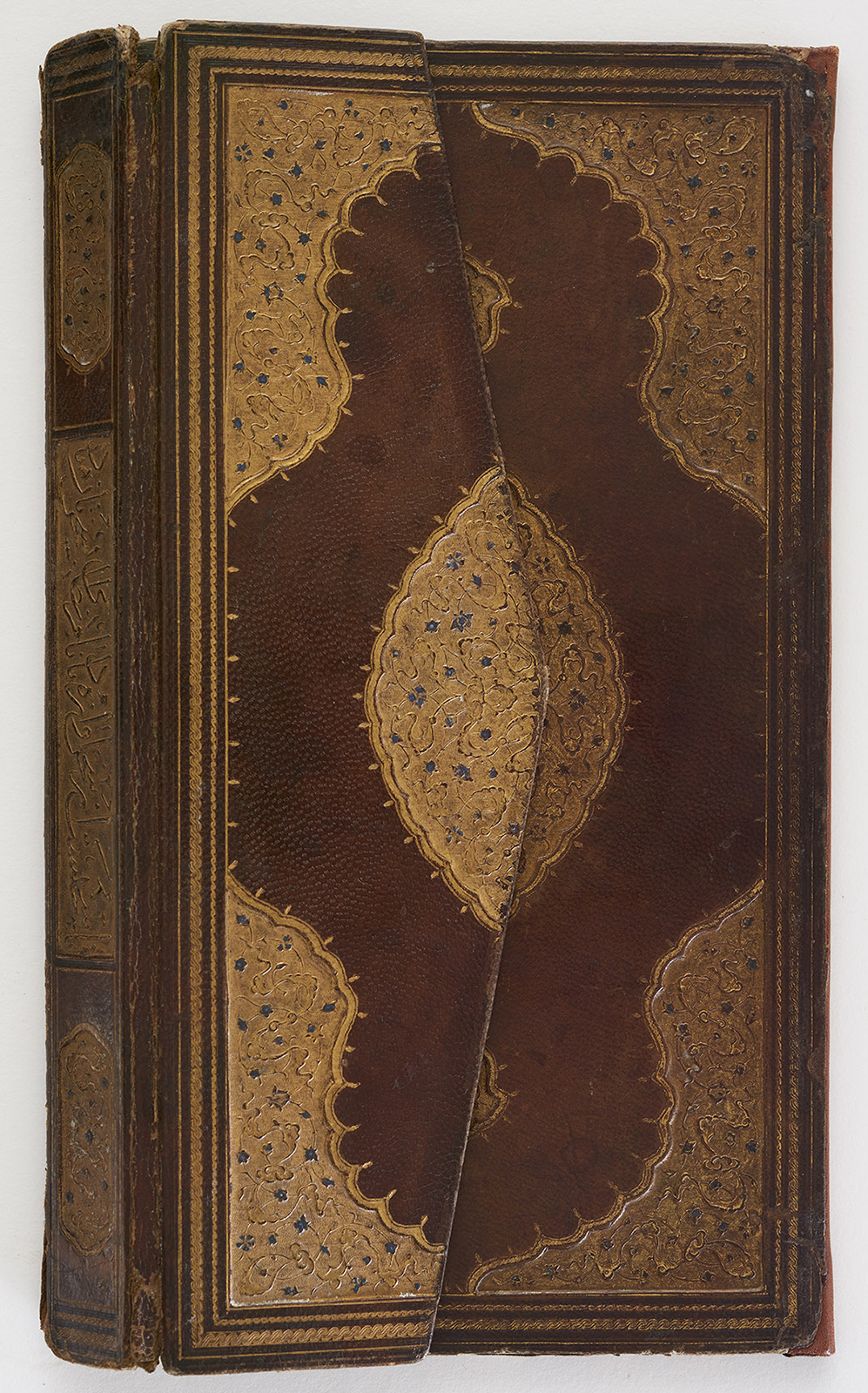 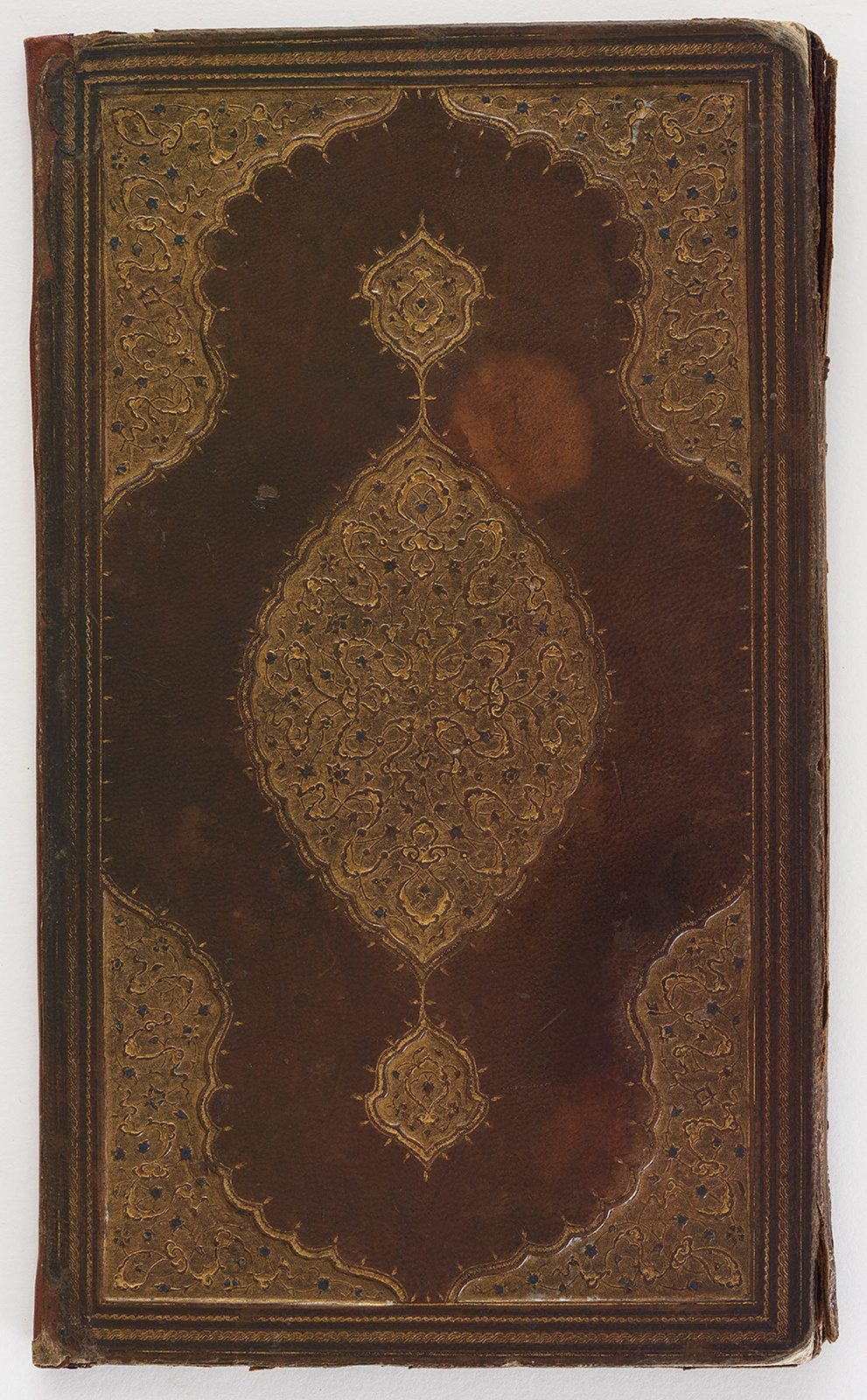 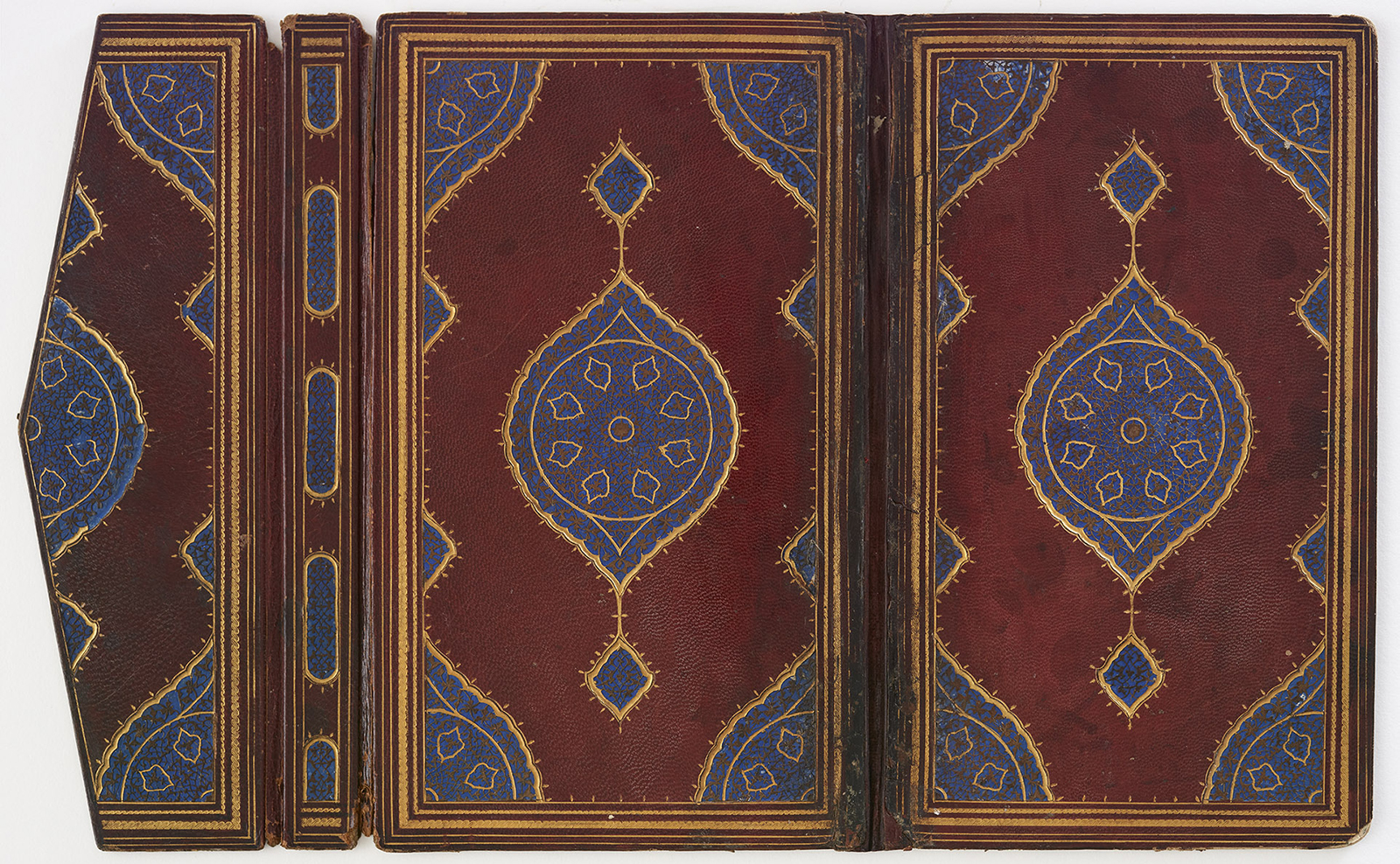 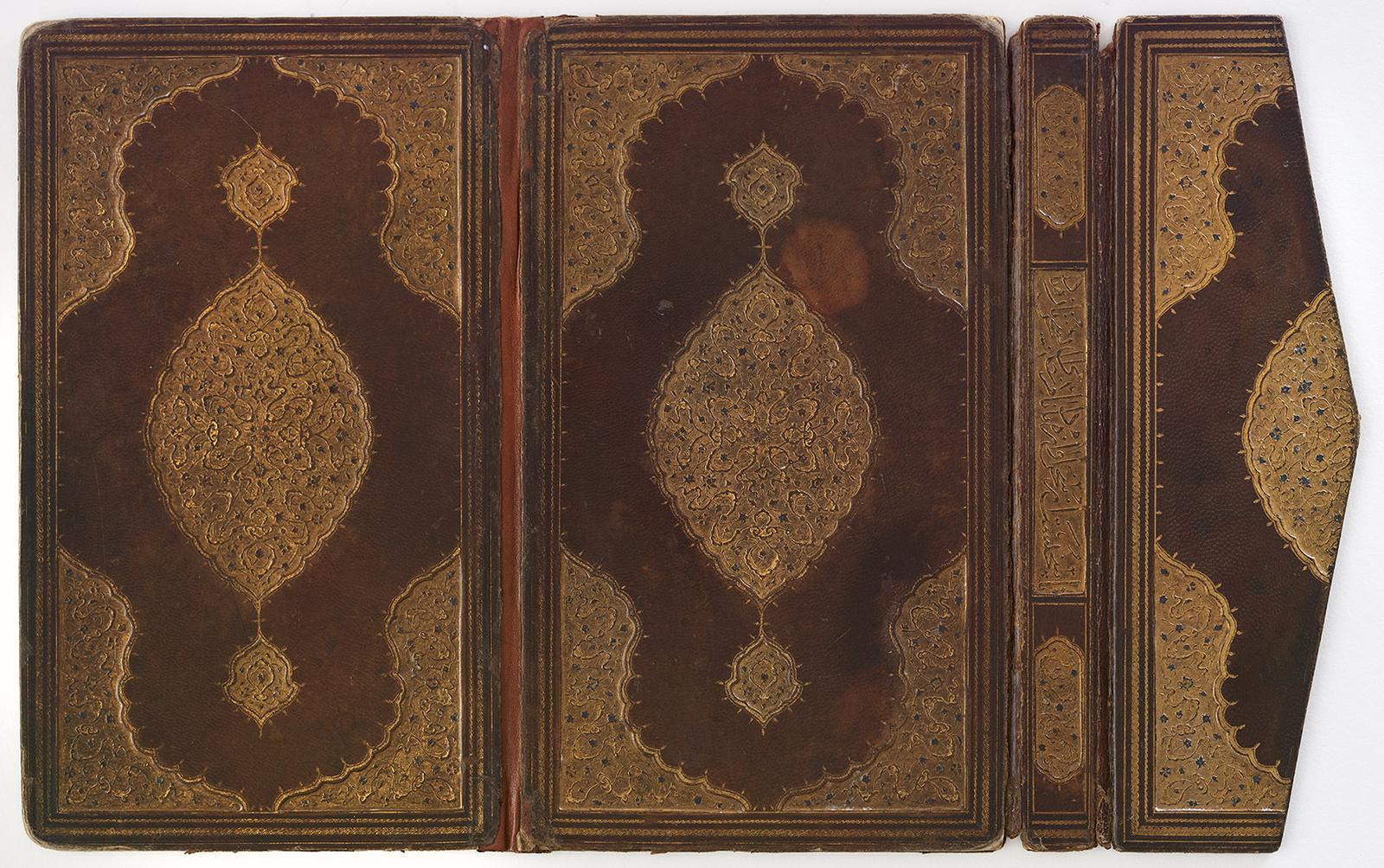 This large and finely decorated binding in the Aga Khan Museum Collection is clearly the work of a master binder. Its chestnut-coloured leather outer covers are decorated with a recessed oval medallion with pendants and cornerpieces. Inside these are stamped two-tier designs consisting of scrolling branches with tiny flowers below, overlaid by cloud motifs. The decorated areas are gilded and the tiny flowers are painted blue.

A clue to the original purpose of this binding is found along its fore-edge flap. The second of three recessed cartouches contains a Persian couplet by the Iranian poet Nizami (1141–1209). The couplet derives from the Makhzan al-asrar, which is the first part of Nizami’s Khamseh:

This couplet shows that the binding was made for a copy of the Khamseh-i Nizami, one of the masterpieces of Islamic literature.

Similar to the outer cover, the doublures feature a medallion with pendants at the centre and cornerpieces in the four corners. The medallion and cornerpieces are painted in lapis blue and filled with finely-cut filigree leather in a design of scrolling branches that form eight cartouche-like motifs inside the medallion. The border is filled with rows of flower motifs. Five cartouches on the fore-edge flap are also decorated with leather filigree. This style of binding decoration began to be used on the doublures of manuscript bindings produced in Shiraz in the late 15th century during the Akkoyunlu Turkoman period (1467–1501) in Iran.[2] Binders in Shiraz continued to use this style of doublure decoration during the Safavid period (1501–1722) on the doublures of bindings for books copied in the first half of the 16th century.[3] However, towards the mid-16th century a broad border filled with leather filigree cartouches was added to the edges of the doublures.[4]

[4] A more elaborate version of the doublure design of AKM383 is found on the doublures of a royal Ahsan al-Kibar manuscript dated 932 (1526) that was probably copied in Shiraz: St. Petersburg NLR. Dorn 31. See Olga V. Vasilyeva, A String of Pearls. Iranian Fine Books from the 14th to the 17th Century in the National Library of Russian Collections, 74, 122–23. Another similar but non-royal example is found on the outer cover of an Ottoman copy of a scientific work produced much later in 1176 (1762). See Yıldıray Özbek, Kayseri Raşid Efendi Kütüphanesindeki Kitap Kapakları, 206–7.

Grube, Ernst J. Islamic Paintings From the 11th to the 18th Century in the Collection of Hans P. Kraus. New York: HP Kraus, 1970.