Correspondents for a number of Europe’s leading media outlets attended the London, UK, launch on October 9 of a new partnership between the Aga Khan Museum and Luciano Benetton’s Fondazione Imago Mundi, dedicated to fostering dialogue and understanding between cultures.

Journalists for the UK’s BBC Four, the Italian daily newspapers La Repubblica and the Corriere della Sera, the international Art Newspaper and the leading art magazine Frieze, as well as lifestyle magazines Tank and the Robb Report, were among the first to hear about the partnership’s inaugural initiative. The jointly-created exhibition Don’t Ask Me Where I’m From channels the experiences of 15 artists who are first-, second-, and third-generation immigrants –  a growing body of people raised in a culture other than their parents’ – in a series of diverse works exploring cross-cultural artistic realities. The exhibition will open at Imago Mundi’s Gallerie delle Prigioni in Treviso, Italy in November 2019 before travelling to the Aga Khan Museum in February 2020, and then to venues across Canada, the US, Europe, and the Middle East.

At the launch, held in London’s new Aga Khan Centre, the partnership and exhibition were introduced by by Dr. Radwan Khawatmi, Board of Directors, Aga Khan Museum, Luciano Benetton, Chairman Fondazione Imago Mundi, and Prince Amyn Aga Khan, Chairman of the Board, Aga Khan Museum. The institutions’ shared values were highlighted. Prince Amyn referred to the Museum’s mission to reflect how cultures connect and dialogue with another, and said the exhibition is “an excellent example of that, having as it does the theme of migration.”

Enrico Bossan, director of Imago Mundi, and Henry Kim, director and CEO of the Aga Khan Museum, also spoke at the launch, with Mr. Kim calling the partnership between the two institutions an inspiring one. The exhibition’s co-curators, Marion Eele of Imago Mundi and Marianne Fenton of the Aga Khan Museum, provided a brief look at the work of each of the artists, who together represent 25 countries. The curators discussed the themes that emerge in the exhibition, including the notion of “home” as something that can shift and change. They then invited one of the artists, Shinpei Takeda, who travelled to London from Dusseldorf for the launch, to say a few words.

Takeda is currently based between Germany and Mexico and, since childhood, has lived a nomadic life in various cities in Europe, the US, and Japan. “The impact of splitting time between different countries and having lived in so many places from a young age,” Mr. Takeda said, “is that I have become very flexible with the way I work, and this has helped me navigate different contexts and formats.”

For the exhibition, Mr. Takeda has made a work called The Arc of Great Returns, using the crates designed to carry the Imago Mundi exhibition panels (literally the luggage) to create a gate structure that leads to what the artist admitted was “perhaps a Utopian place, home.”  As the Italian wire service ANSA noted in its report on the London launch, the hopeful message of the exhibition goes against the current of fear in global politics today, and captures the partnership’s ambition. 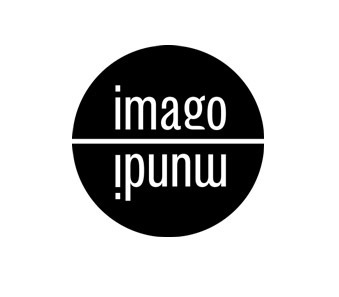